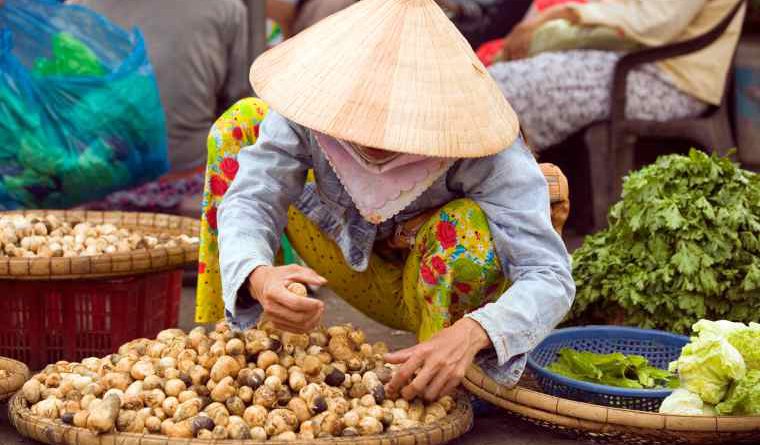 A visit to Ho Chi Minh City sees you thrust into a world that’s a million miles away from the one you’re used to. High-octane, life-affirming, energetic and exhilarating, this is the kind of city in which no amount of hours is ever quite enough to take everything in. Here are some of the best places to start, from white-knuckle moped rides to steaming bowls of bun by Hue.

What to see in Ho Chi Minh City…

The beauty of Ho Chi Minh City is that it is an attraction in itself. There’s a vibrancy here that leaves you reaching for your camera every other minute to snap local life, in between eating local dishes that cost pennies yet sit up there as some of the best things you’ve ever tasted. Ride a moped through the cinematic city as part of an organised tour, stopping off at the Ben Thanh Market in District 1. The market is the oldest and biggest in Ho Chi Minh City and you’ll find everything from Vietnamese delicacies to souvenirs on its stalls. Be sure to give your bargaining powers a workout here; locals expect you to haggle for your wares and it’s all part of the fun of visiting the market.

Arguably Ho Chi Minh City’s most-visited attraction is the Cu Chi Tunnels. It took twenty years to dig this elaborate tunnel system with nothing but hoes and bare hands, its muddy maze spanning more than 120 miles at 30ft below ground, including a section which ran mischievously beneath the American Army Base. The tunnels allowed Viet Cong to avoid aerial attacks, house troops and mount surprise attacks on the opposition, retreating to their underground warren once the damage was done. The tunnels have become not just a war memorial, but also a tribute to human will and ingenuity in the face of adversity. Don’t miss the opportunity to squeeze into one of the tunnels yourself to really appreciate how snug they are. The War Remnants Museum is equally interesting for anyone keen to discover more about the destination’s past.

With 36 hours in Ho Chi Minh City, you have plenty of time to escape to the Mekong Delta on a full or half-day tour. Visit the My Tho fishing village and floating fish farms, explore Tortoise Island and discover the lifestyle of local villagers in a traditional Vietnamese household. 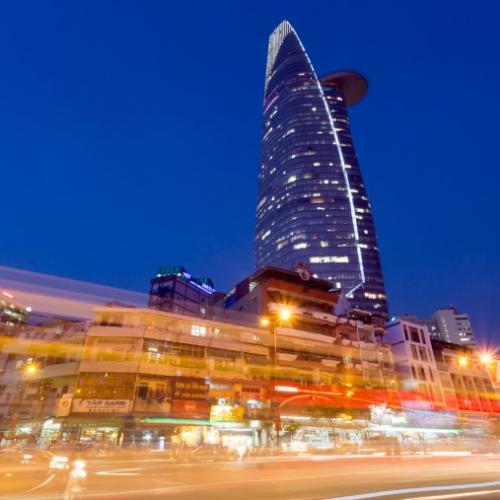 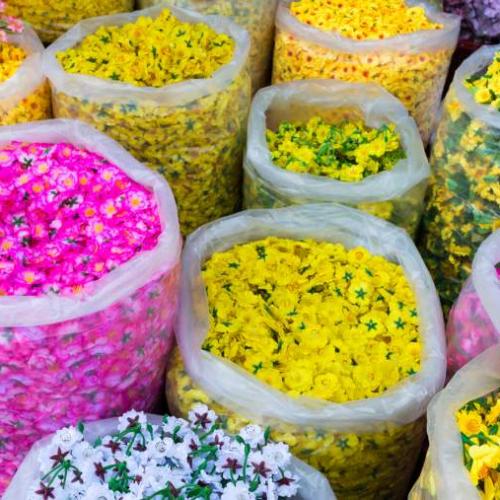 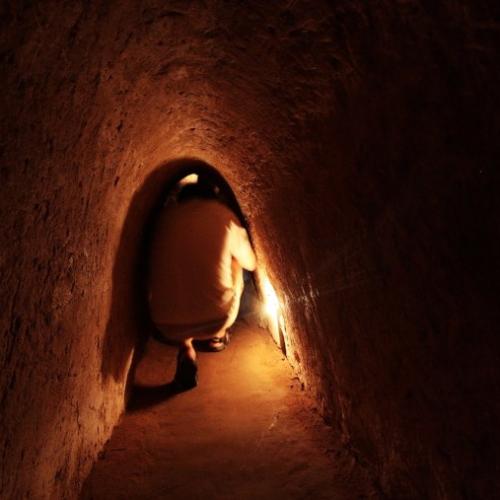 Secret Garden appeared in 2013, created by a young restauranteur to put Vietnamese family favourites on the map. The rooftop restaurant takes five flights of stairs to reach but the food is worth the climb and the views across the skyline at sunset are something else. The same founder also owns Secret House across town, a restaurant serving the same authentic, home-cooked cuisine at street level.

Pho might come to mind when you think of Vietnamese signatures but it is the lesser-known but equally delicious bun by Hue broth that tantalises the taste buds of visitors to Bun Bo Hue Dang Ba in District 1. Vermicelli-style rice noodles simmer in a spicy broth with beef and lemongrass; it’s a taste sensation that you’ll desperately try to recreate at home but never quite manage it.

Seeing locals at the next table is usually the sign of a good restaurant and Cuc Gach Quan is as popular with city dwellers as it is with visitors. Reserve a table in advance to avoid disappointment and ask the waiter to bring you a selection of dishes to save yourself the hassle of trying to choose between a menu on which everything is equally delicious. 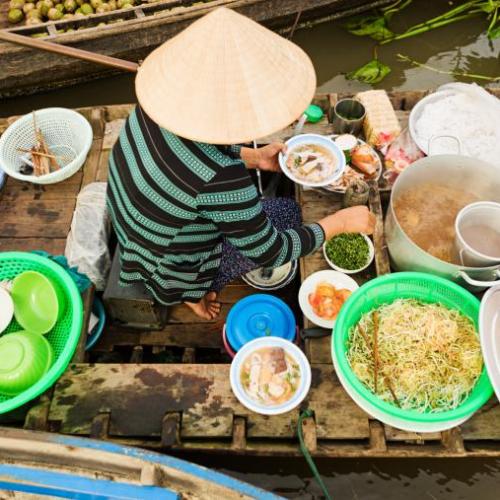 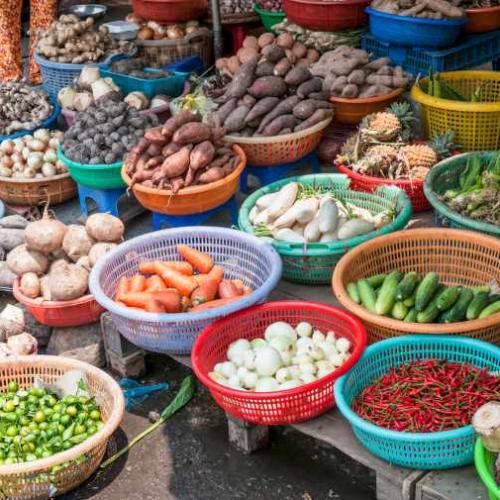 Drink up in Ho Chi Minh…

A cocktail at the 50th-floor bar of the Bitexco Financial Tower isn’t cheap but it’ll give you access to the same views as the ‘Saigon Skydeck’ for a little less than the entry fee. Go at dusk to see the city light up from 262m above. There’s a restaurant too, EON51, along with a Heineken factory that’ll appeal to anyone partial to a pint.

Ho Chi Minh City’s coffee scene has seen a plethora of cool cafes spring up around its districts. Some are novel, like the ICHI Cat Café, while others are a hidden oasis in the bustling city streets. One such is Du Mien Garden in the busy Go Vap District, where concrete walls hide a treehouse, ponds and even a waterfall. You’ll struggle to find a more zen place in which to enjoy a coffee. 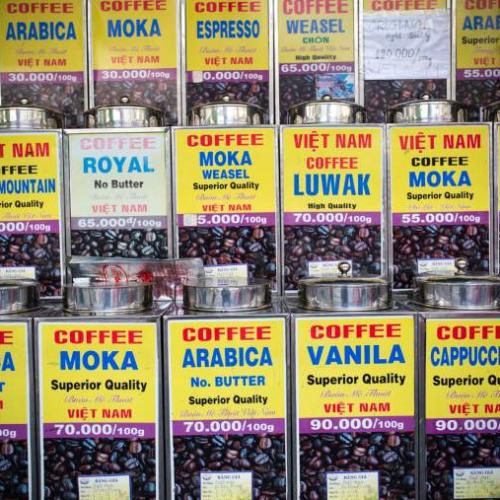 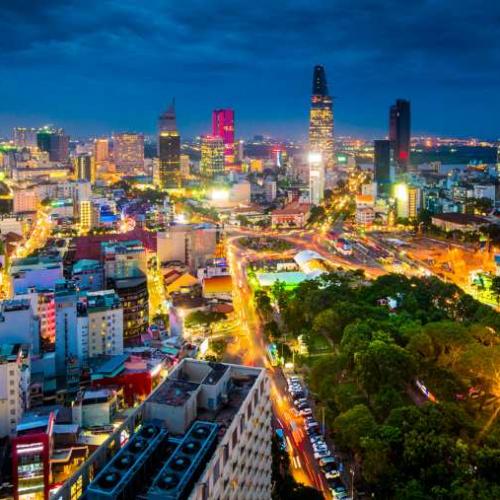