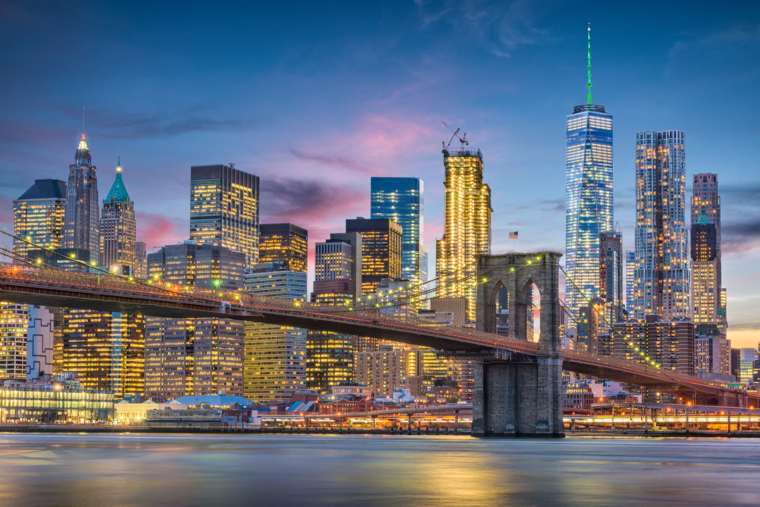 36 hours in the Big Apple passes by in a New York minute, but you can cram more into your seconds here than you can anywhere else in the world.

Things to do in New York

People watching takes on new meaning in Manhattan. You do it everywhere, your jaw slack at the movie scene you’re suddenly an extra in. Watching the world go by is arguably the city’s main attraction. In Central Park, the people watching shows you somersaulting street performers and musicians singing for their supper. The intricate tiles of Bethesda Terrace have been well-trodden by ballet shoes and tapping toes, the elaborate Minton Tile ceiling and trompe l’oeil niches acting as quite the backdrop. Perch on the edge of Bethesda Fountain and you may just witness a marriage proposal, or better still, a wedding. Later, head to the entrance of the Loeb Boathouse, armed with $15 and strong arms. Within minutes you’ll find yourself rowing a wooden boat in Central Park Lake, the city rising above and the turtles swimming below.

Central Park lays Museum Mile and the Midtown marvels at your feet. Head west and you’ll dip out of the park and into the land of dinosaurs, better known as the American Museum of Natural History. To the east is The Metropolitan Museum of Art, whose footprint covers more than two million square feet and where many of mankind’s greatest artistic accomplishments are contained. A little further north, the white concrete curves of the iconic Solomon R. Guggenheim Museum lie just beyond the boundaries of the park’s Jacqueline Kennedy Onassis River.

Venture south and you’ll find the shops. Fifth Avenue is frenetic, the storefronts enticing, the crowds undulating, the atmosphere electric. High street and high-end jostle for your attention and your holiday spends. If you’ve money to burn, Bergdorf Goodman, Saks and Lord & Taylor are the places to do it. For top end designer pieces without the price tags to match, it’s got to be Century 21. This colossal department store is located in the Financial District, close to the One World Trade Center, 9/11 Museum and The Oculus, but do your sightseeing first while you have hands free of shopping bags.

Empire State Building or Top of the Rock?

Eventually, once you’re all shopped out, you’ll be faced with one of the hardest decisions of any New York visit: Empire State Building or Top of the Rock? Take our advice and do both. You see, the Empire State Building is the star of the Manhattan skyline and only from the Top of the Rock can you get those pinch-yourself views of it. Time your visit to coincide with sunset if you want the money shot. Later, when the skies are dark, the curtains have closed on your choice of Broadway show, you’ve stood on the red steps of a neon Times Square and you’ve eaten the finest steak New York has to offer, it’s time to tick the Empire State Building off your bucket list. The Empire State Building Observatory is open until 2.00am all year round, and if you happen to be in town between Thursday and Saturday, a live saxophonist makes for pure movie magic if you time your visit between 9.00pm and 1.00am. 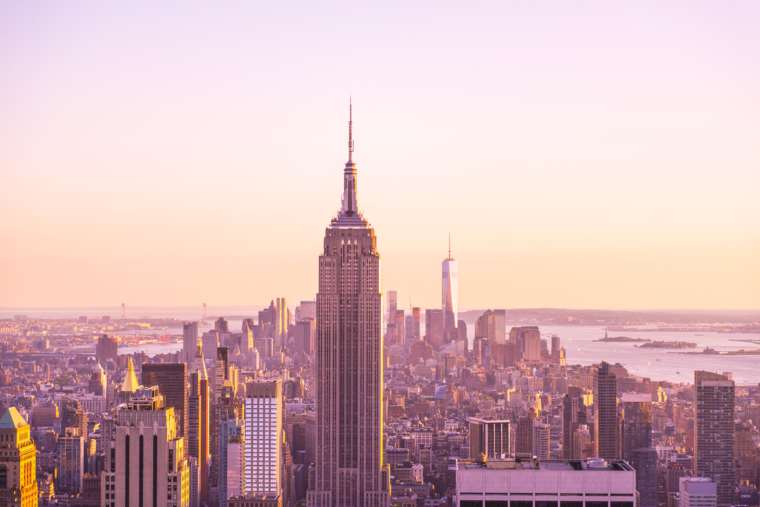 To visit New York and not venture away from Midtown is a rookie error, so set your second day aside for sloping off south. There’s more to Lower Manhattan than the Brooklyn Bridge, but it’s as good a place as any to start. Karl Pilkington of Idiot Abroad fame once said “I’d rather live in a cave with a view of a palace, than live in a palace with a view of a cave” and few quotes better describe Brooklyn. Whilst by no means comparable to a cave – in fact it’s a hipster paradise with properties as expensive as those across the water – Brooklyn doesn’t half have a great view of the ‘palace’ of Manhattan. If money were no object in your quest to wake up to the New York skyline, it is in this chic Brooklyn waterfront neighbourhood that you would live. To make the most of those views, walk on the banks of the East River at Brooklyn Bridge Park, blowing $2 on a ride aboard Jane’s Carousel. Don’t worry, there’s no age limit.

Back on Manhattan soil, Washington Square Park feels like the centre of the universe. Gymnasts practice on the grass, tops off, muscles flexed as their bodies contort and stack skyward. Dogs cool off in the fountain spray, their masters slurping snow cones and watching the world pass by from behind their Ray-Bans. A guy in a mustard shirt rifles through a tin of chalks, looking for the perfect purple to bring the Prince mural taking shape on the sidewalk to life. The Crazy Piano Guy summons Beethoven’s Für Elise from the keys of his baby grand. And all the while, life in Manhattan goes on around them at a million miles per hour. It’s a show you’d pay to see, but it is one which plays out for free on these ten acres. If Central Park is considered the ‘lungs of the city’, then Washington Square Park is its beating heart.

New Yorkers do brunch like nobody else and nowhere does it better than Buvette. This West Village hideout serves seriously good French food with a side of celebrity spotting; locals Jake Gyllenhaal and Liv Tyler are fans, with Gwyneth Paltrow also said to favour Buvette for the cheat meals that get her through her strict detox diets. Famous faces aren’t only lured by the privacy and leisurely ambience, but also by the promise of a killer waffle sandwich piled with bacon and cheese, dripping with maple syrup. And don’t get us started on the gruyere-oozing Croque Forestier.

In a city where sightseeing and shopping accounts for your much of your waking day, it goes without saying that you’re likely to work up quite an appetite by lunch. Fortunately, of New York’s 25,000-plus eateries, many are of the kind you can dip in and out of without wasting too much time, a good meal always guaranteed. Macbar Soho takes the American obsession with mac ‘n’ cheese up a notch and good god, it’s good. We’re talking mac ‘n’ cheese with roasted mushrooms, mascarpone and truffle essence, aka the ‘mac’shroom’, and our personal favourite the ‘mac quack’, layered with duck confit, fontina and caramelised onions. Praise be to the pasta gods.

New York is known for its steakhouses and while they may all look the same – all mahogany-clad walls, red leather seats and aloof, aproned waiters – they’re worlds apart in terms of taste. Cash-only Peter Luger’s requires a trip across the East River and into the hipster enclave of Williamsburg, but the dry-aged steaks at this New York stalwart are so good that even the Wall Street heavies are willing to make the trek into bohemia. If you don’t fancy crossing the water, head to Wolfgang’s in wealthy Tribeca. The experience here is an upmarket one and you’re almost guaranteed to find yourself in the presence of Chanel-clad locals or a vocal venture capitalist, entertaining his clients with innuendo. Whether you opt for Wolfgang’s or Peter Luger’s, the procedure stays the same; keep your appetizers light, share a porterhouse for two, pile on the creamy mash potatoes and always leave room for apple strudel with homemade ‘schlag’.

Finally, there’s the dollar slice of pizza, a thing of New York legend. Let’s start by clearing up the frequently asked questions: yes, you really can get a freshly-baked margherita slice for a dollar (that’s approximately eighty pence, depending on how nicely the interest rate is playing). Yes, it will be the sweetest darn slice you ever did eat, and yes, it’ll probably be one of the biggest you’ve ever eaten, too. The secret to eating a slice like a true New Yorker is ‘The Fold Hold’, so visit your pizzeria of choice, grab a napkin, go heavy on the parmesan and chilli flakes, fold your slice lengthways and NEVER resort to a knife and fork.

New York knows how to show you a good time, all you need to do is choose your poison.

When the temperatures are balmy and the city is busy, those in the know head up on the roof. This is the rooftop bar capital of the world and who can blame anyone who wants to make the most of those views. 230 FIFTH is touted as the best of the bunch, but we prefer the secret Provençal garden feel of Gallow Green in Chelsea. Wisteria grows high above the city on the rooftop of The McKittrick Hotel, home of the acclaimed Sleep No More experience. On any given evening, you can expect to find in-the-know locals hiding away from the hustle and bustle at rustic tables, lavender-infused cocktails and artisan ales in hand.

It’s hard to know how The Bitter End came to be known as such, but it’s fair to say that many boozy nights have met their own bitter end at this All-American bar. NYC’s oldest rock club was established in 1961 and has been welcoming rock ‘n’ roll royalty ever since. Stevie Wonder, Bob Dylan, Tracy Chapman, Van Morrison; the list of those who played The Bitter End on their rise to fame is endless. This Bleecker Street institution still hosts live bands every night of the week and many of them are set for stardom. Its neighbouring bars aren’t half bad either, particularly gastropub Carroll Place. If you’re looking for a true New York night out, this is the place to go. 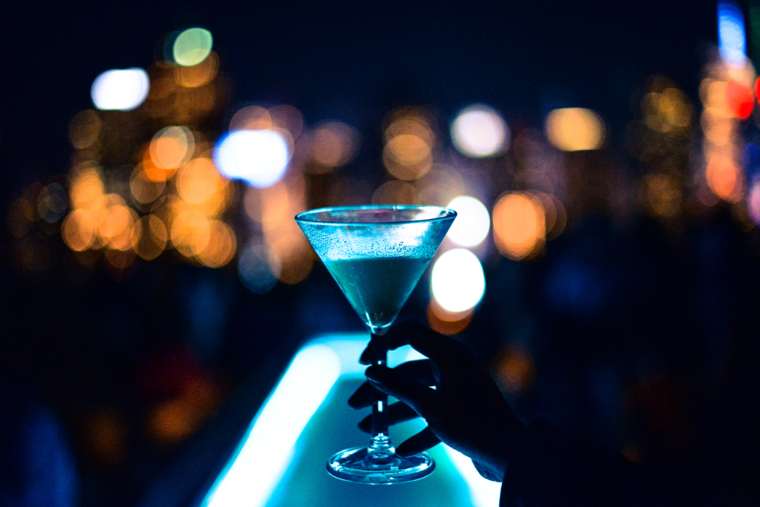