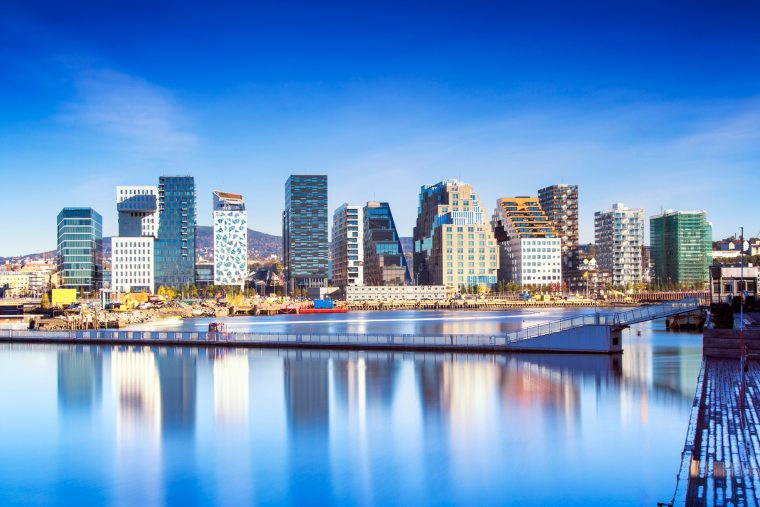 There’s a name for the way Oslo makes you feel. The Norwegians call it ‘kos’ but it’s less a word than a state of mind, an instant happiness that comes with feeling safe, warm and good together. Akin to that feeling on a cold morning when everything just feels right with the world, kos lingers in the air when you’re cradling hot coffee and cinnamon buns on the cushioned window ledge of a café (those Scandinavians really are the space-saving experts…) It’s there when you pause to take in the view of the islands from a bench in the Ekebergparken and when you realise that the world seems to have fallen silent as you watch the sun drop into the Oslofjord before dinner.

But don’t be fooled into thinking it’s all sheepskin and cosy; Oslo is cool. Admittedly, it’s a word thrown around with wild abandon, but the city that feels a lot like the future sure does the term justice with its so-hip-it-hurts locals and electric-powered everything. From electric scooters that are a fast-track to child-like excitement and futuristic Teslas at every stop sign – Oslo is the electric vehicle capital of the world – the European Green Capital 2019 is leading the way with innovations in sustainability and ways to protect the planet. Because why wouldn’t you, when your little piece of it looks as good as theirs does? You probably aren’t cool enough for Oslo, but that’s okay; neither are we.

What to do in Oslo…

The light is different in Oslo, white blue and bright in a morning, warming to coral as the sun sets. When it sets. You notice it most in the way it illuminates the Opera House, a hulking angular slice of Italian marble that teeters on the brink of the fjord, merging once the water starts to freeze until it becomes impossible to see the building’s edge for the ice.

Biting cold is a fact of life here at times, but Norwegians were never ones to let a little thing like sub-zero temperatures deter them from living their best life. Hike to the top of the Opera House and look towards the Langkaia pier for the fjordside saunas that are a sign of an urban sauna culture taking the city by storm. Ancient and ritualistic, winter ice bathing is nothing new to Norway but KOK Oslo’s wood-fired sauna boats are; each eco-friendly hut cruises the inner fjord to combine sightseeing with cold-water swimming.

Further around the waterfront is SALT, a cluster of nomadic wooden pyramids that wouldn’t look out of place at Glastonbury. SALT’s steam baths vary in size, from the Árdna, one of the biggest in the world, to the Barrel, a smaller sauna built inside a 100-year-old, 7,000-litre aquavit barrel. With food shacks and a bar, art projects, improv theatre and live music, plus daytime activities for the kids, SALT has turned the ritual of sauna into something worth taking up a whole weekend.

Cold water swimming is the tip of the iceberg as far as Norway’s obsession with being at one with Mother Nature goes and you needn’t strap on your skis to experience it. Friluftsliv is a term first coined by Norwegian playwright Henrik Ibsen in 1859, but the concept it describes – of time spent outdoors, reconnecting with nature – is one that has been intrinsic to the culture here for hundreds of years. Best of all, it’s free.

We’re going to level with you here; Oslo isn’t cheap. Norwegian salaries are some of the highest in the world and sticker shock can hit hard on things like food, drink and activities. That’s not to say the city isn’t worth every penny and, fortunately, an inclination towards time spent outdoors means plenty of urban parks on the outskirts of the city centre, all of which are within walking distance of the port, open all hours and free to visit.

There’s an eeriness to the sculptures in Ekebergparken, where views overlook either the peaceful fjord islands or the space-age Barcode District, depending where you stand. On the other side of town, Vigeland is the largest sculpture park in the world by a single artist. Gustav Vigeland created more than 200 works in bronze, granite and cast iron, charting the circle of life from birth to death in various, often bizarre, manners. The installation celebrated 150 years since Vigeland’s birth in 2019 and remains one of Norway’s top tourist attractions.

Even with parks excluded, Oslo’s proximity to nature is unique. Ferries wait to shuttle you to the smattering of islands off the mainland, where talk inevitably turns to how good life would be lived in your cabin on the water, your morning commute made by boat. On dry land, trams trundle the 20 minutes or so to wildernesses such as Nordmarka. This forest looks just like any other, but a thousand of the trees growing here for the last five years are destined for great things, albeit not for almost a century yet.

Created by Scottish artist Katie Paterson, the Future Library project will unfold between now and 2114, the trees continuing to grow like the roll call of writers set to fill the paper they’ll eventually become with text. In 2014, Margaret Attwood became the first author announced for the project but, annoyingly, we’ll never get to know what she has written; the acclaimed author has said that wild horses could not drag the story out of her for an early reveal. In the meantime, elements of the Future Library will have a home in the city at the Diechmanske Bjørvika, the
state-of-the-art library opening in 2020 as part of a huge expansion project in the city. The same district will also host the impressive aluminium-clad Munch Museum, a new, not-so-humble abode for many of the 28,000 works of art Edvard Munch created over his lifetime, including The Scream.

Places to eat in Oslo…

Like any hipster hangout worth its artisanal Himalayan rock salt, Grunerløkka started out as a gritty industrial district in a part of town that doesn’t warrant sticking around in for long. Fast-forward a few years and the red-brick warehouses down by the Akerselva river have replaced industry with culinary utopia.

The Mathallen Food Hall is compact but bijou and its independent traders are a tasty bunch. Whether it’s a bowl of oysters in creamy broth at Vulkanfisk, Asian street food but not as you know it at Hitchhiker, duck confit on crusty bread at Galopin, or all of the above, shared with friends at one of the long communal tables, the amount of choice alone makes it too tasty an option to miss. Finish up with drinks at Smelteverket in the basement, home to Oslo’s longest bar and one of the best craft beer selections in the city.

When nothing will do but a burger after an afternoon spent working up an appetite shopping Grunerløkka’s vintage treasures, head for Illegal Burger. With names like ‘Sweet Baby Cheesus’ and ‘Lookin’ for truffle?’, the tongue-in-cheek menu is enough to lure you in and the perfectly-cooked beef patties topped with everything from truffle oil mushrooms to chipotle hummus will make it worth your while. Everything on the menu can be made suitable for vegans and vegetarians too.

Oslo has taken a while to catch up with its more culinary-inclined neighbours like Copenhagen and Stockholm, but a penchant for new Nordic cuisine has seen the city gain traction on the foodie front in recent years. Maaemo retained its three Michelin stars in the 2019 guide, but you’ll need to plan ahead if you want to experience the sixteen-course tasting menu. For fine dining with a slightly more palatable price tag, Ekebergrestauranten in the Ekebergparken serves food as delicious as the views from its windows are stunning.

Places to drink in Oslo…

Oslo is Scandinavia’s coffee capital and if you only drink one cup of joe during your time here, make it an espresso at Tim Wendelboe on Grünersgate 1. Wendelboe was Oslo’s original coffee pioneer, an award-winner and innovator whose namesake coffee shop has turned his and our favourite hot drink into an all-out experience for coffee connoisseurs.

For something a little more intoxicating, delve into the alchemistic rabbit hole that is Himkok. Tucked behind the number 27 on a grey door on the Storgata, the bar reminiscent of a Prohibition-era hideaway doesn’t just pour spirits, it makes them. Every night of the week until 3am, white-jacketed mixologists combine Nordic flavours like seaweed, cloudberry, pine needle and Brunost cheese with Himkok aquavit, gin and vodka distilled on site. Such uncommon concoctions have earned Himkok a place on The World’s 50 Best Bars list numerous times, while an unshakeable dedication to local produce and on-site processes saw it awarded the first-ever Ketel One Sustainable Bar Award in 2018.

For a cold brew with a view, jump on one of the many electric scooters used by locals to get around and tear along the harbour to Vippa. This multicultural food and drink court gazes upon the kind of scenery that leaves you unable to resist photographing your beer with a fjord backdrop. If a picture really speaks a thousand words, this one says that Oslo has the natural beauty and intoxicating personality to make its price tags feel totally and utterly bearable.