A Centenary At Sea 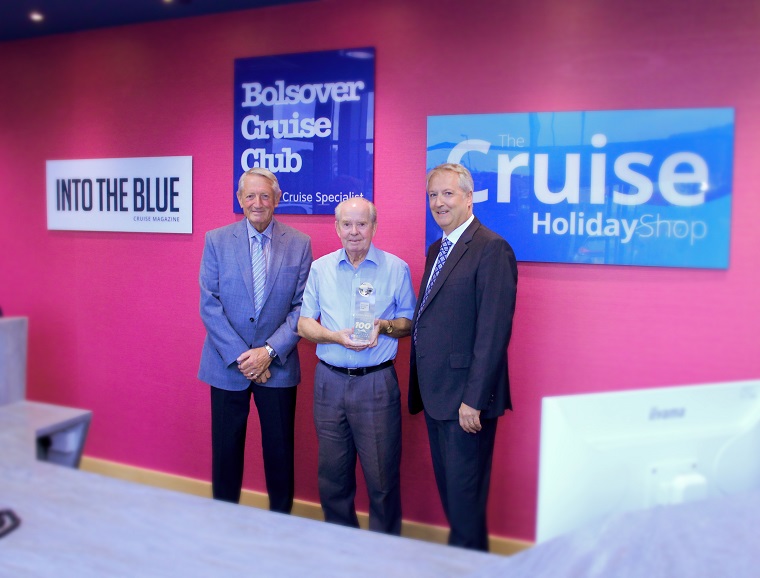 Earlier this year, Colin Bell became the first person to have booked a hundred cruises with Bolsover Cruise Club. When he visited us for an evening of celebrations to mark the occasion, we decided to have a chat and find out what keeps him coming back.

Colin Bell’s next cruise will see him travel further by ship in a week than he does in his own car over the course of an entire year. What’s more, whilst he estimates his annual mileage to be a miniscule 1,000 miles, Mr Bell’s four cruises per year see him rack up tens of thousands of nautical miles on the deepest blue.

Colin has cruised since 1979, when like many avid cruisers he got his first taste of life at sea on board the SS Canberra. That first cruise saw him spend 11 days sailing around the Canary Islands and it’s safe to say that he fell for cruising hook, line and sinker. 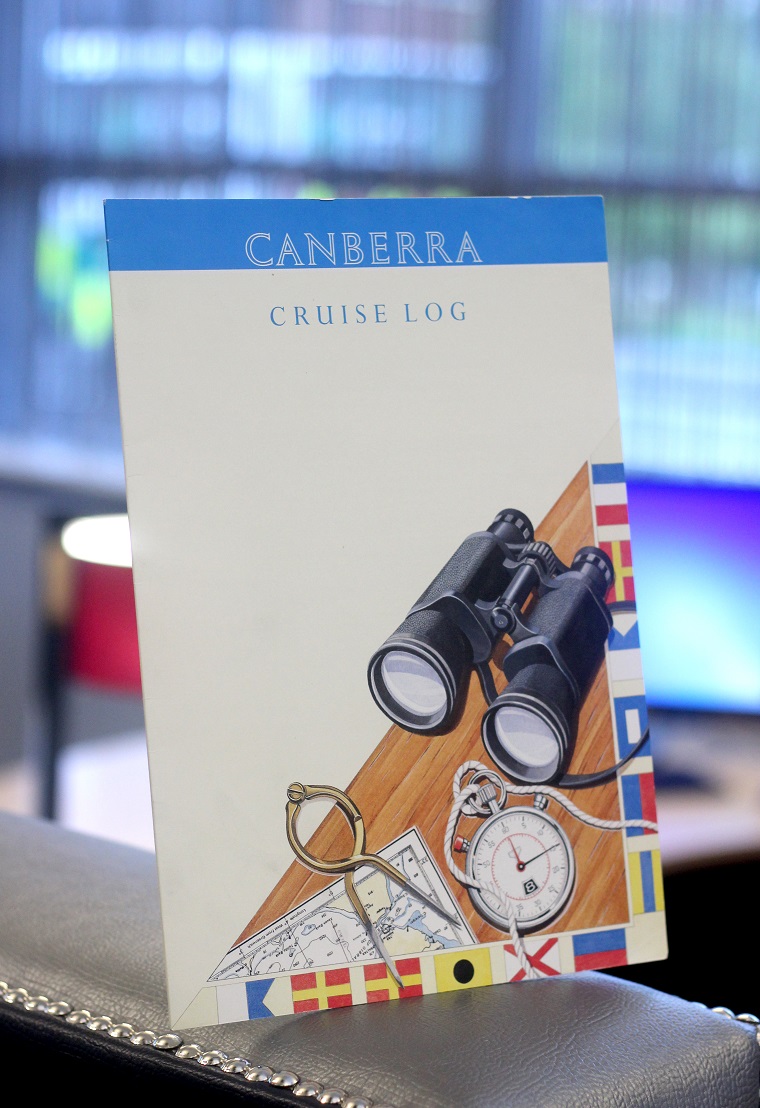 “I enjoyed the cruise and the company. Yes, I was hooked. I came back and immediately booked another two cruises for the following year,” says Mr Bell.

Today, Colin cruises to chase the sun. “I’m a sun fanatic. I like to do the Mediterranean through summer, the Caribbean in January and preferably a World Sector in March. You could say I like to avoid the worst of the winter.” Every now and then he surprises his long-time Sales Consultant Chloe by booking a fifth cruise.

Of the relationship he has built with Chloe over the years, before which he booked with Bolsover Cruise Club’s Managing Director Michael Wilson, Colin says: “I’ve booked with Chloe for a long time. She knows everything about me, from the grade of cabins I want to which areas I like my cabins in and the times of year I like to cruise. I ring Chloe and it’s a case of ‘which cruises have you sorted for me this time?’ She has a very good idea of what I want.” 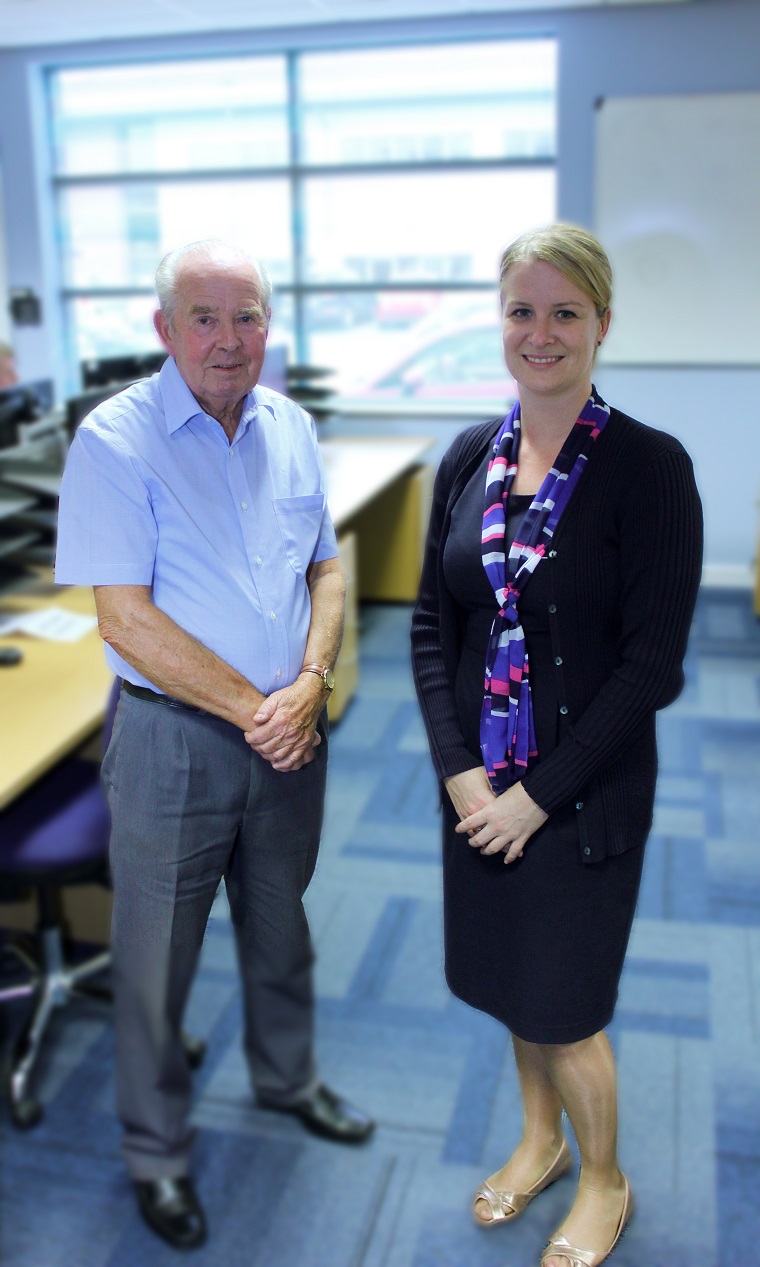 When Colin started cruising, he’d ring around various travel agents looking for the best price. After hearing about Bolsover Cruise Club from a friend, he booked with us for the first time in 1982 and says that he hasn’t looked back since.

“I’ve never even considered shopping around or booking with anyone else. There’s no need for me to,” says Colin.

After a hundred bookings, it is safe to say that Colin is a testament to the power of unwavering customer service.

“I’ve booked with Bolsover Cruise Club for 35 years. They’re very friendly, the service really is ‘one-to-one’ and I have never, ever had a single problem with them. If I have ever had a issue with a booking, it has always been sorted very quickly.” 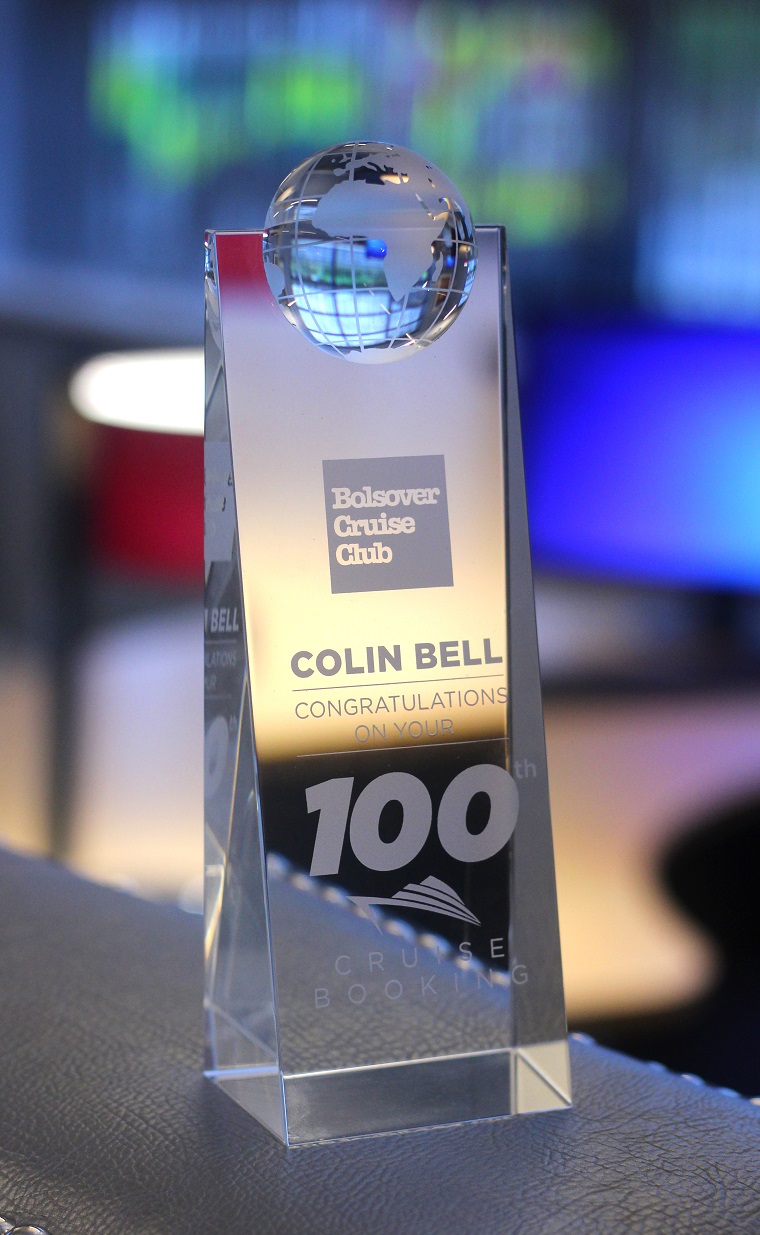 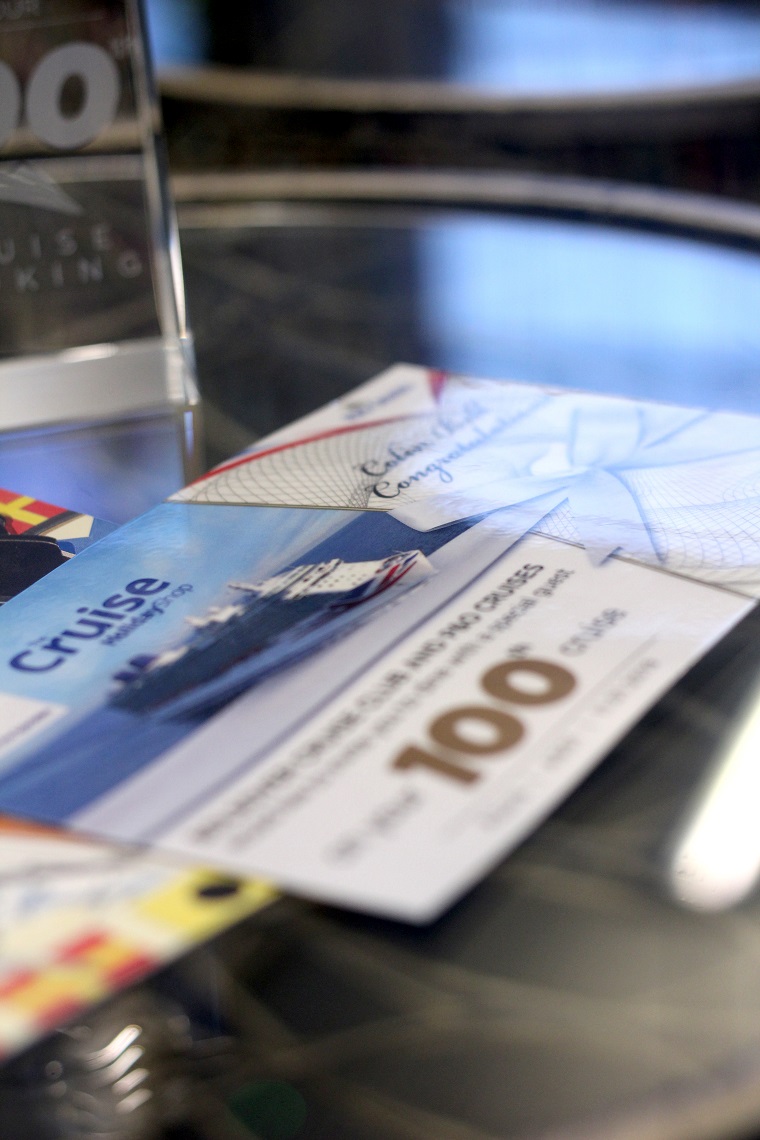 With so many sailings under his belt, Colin knows what he likes. He always travels in the same cabin, saying: “I’m a creature of habit. You get to know your cabin and what area of the ship it’s in. Whether it is near a lift or below a dance floor, that kind of thing.”

After cruising on almost every ship in the P&O Cruises fleet, Aurora and Oriana are his favourites. “I’m not in favour of the big ships. I prefer the smaller ones, they’re more homely. If, like me, you just want to sit on the deck, enjoy the sunshine and the peace and quiet, they’re just right.” Colin continues: “I love everything about P&O Cruises. The ships, the staff. I like that the cruise line is so British and that everyone is so friendly.”

Colin often cruises solo and he believes that cruising offers something to single travellers that no land based resort ever could. “Being on my own, I think I’d be lost in a hotel. On a cruise, you can be alone or you can mix. You just don’t get that same opportunity in a hotel, it feels far more separate. Everything is provided under one roof on a ship.”

Colin continued: “I’ve met a lot of very nice people over the years and lots of them remain lifelong friends. We meet up from time to time and we’re always in touch. In fact, I met the couple I’m travelling with in September on board the Canberra back in the 1980s.” 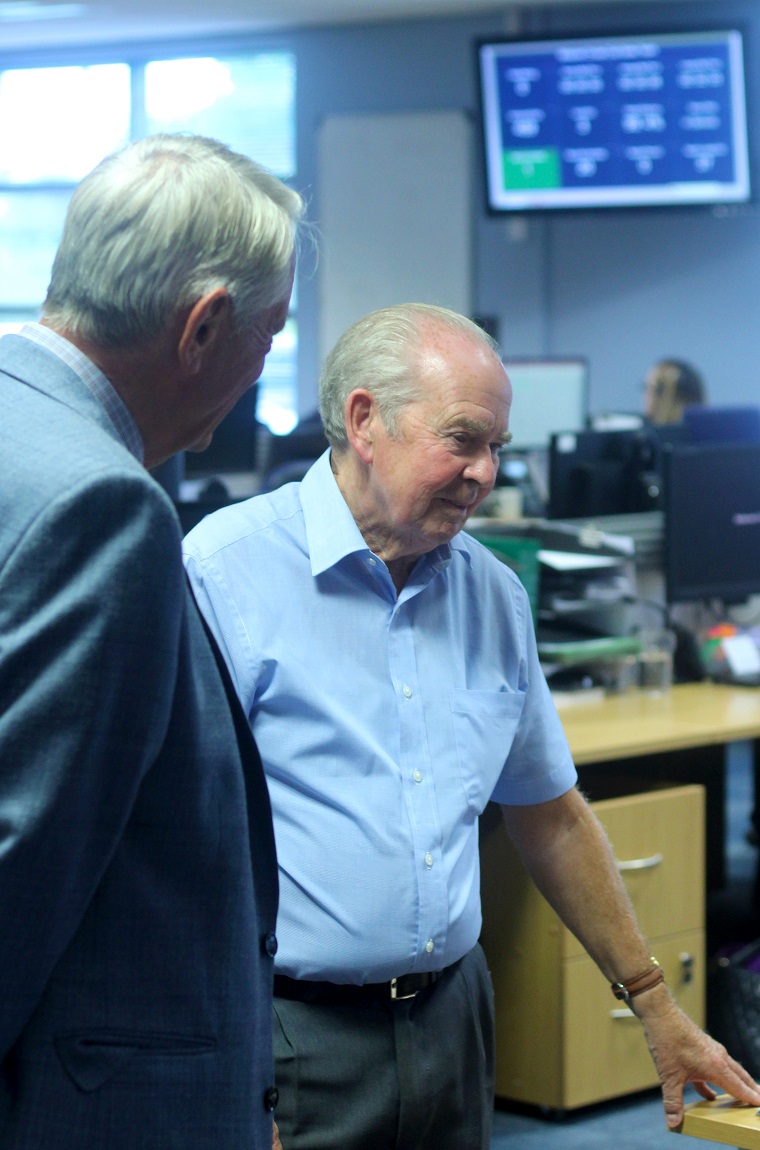 As one would imagine, Colin has seen most of the world over the course of more than a hundred cruises. In fact, the only World Sectors he hasn’t done are San Francisco to Acapulco and Barbados to Southampton. He’s ticked off the big bucket list destinations, mentioning Sydney as a particular favourite destination, and loves anywhere with history in the Mediterranean.

“I like going to Ephesus and I tend to go back every five years or so, just to see how it has changed. You walk down the main street and you know that you are following in the footsteps of someone who has been there 2,000 years before at the time of Christ. It is quite emotional. Travel gives you a real insight into the history of the world.”

After visiting almost every port in the world, Colin prefers to make the most of the peace and quiet on board rather than heading out on excursions. “I love the peacefulness of being on the deck on my own. I just want relaxation on a sun bed. I’m content being in the fresh air, in the sunshine.” If he does venture ashore, he tends to join an organised P&O Cruises excursion.

The only question that remains is whether Colin will follow in the footsteps of American Lee Wachtsetter and others who have retired to the seas? “No! Definitely not. I have heard of these people who spend their retirement on board a ship but it isn’t for me. I’m happy to do 3 or 4 weeks at a time but I’d much rather do a sector than a full world cruise. I’m happy to spend a few months at sea but I’m also happy to come home.”

When this magazine drops on his doorstep, Colin won’t be there to receive it. Instead, he will be midway through a cruise to Venice and the Adriatic on board Oriana, his fourth cruise of the year. And who can blame him? 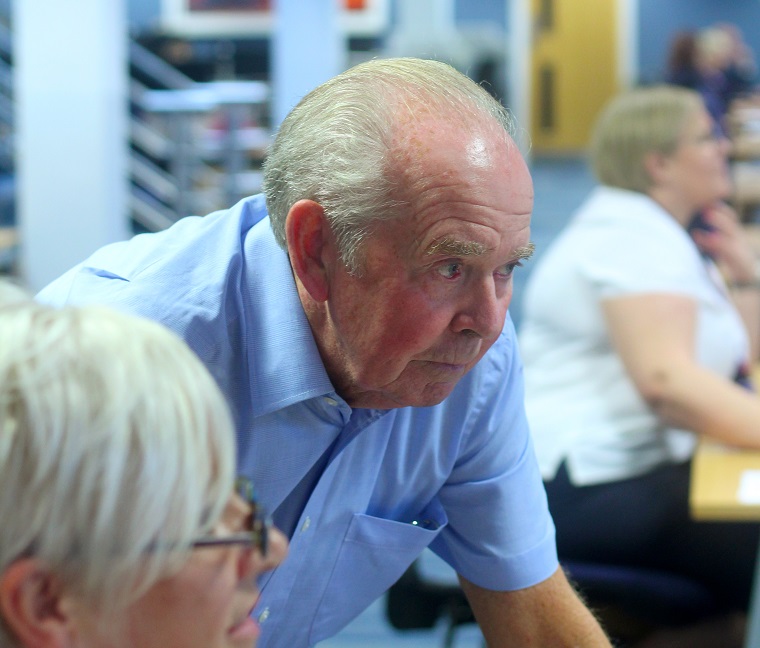