A Closer Look At Barbados 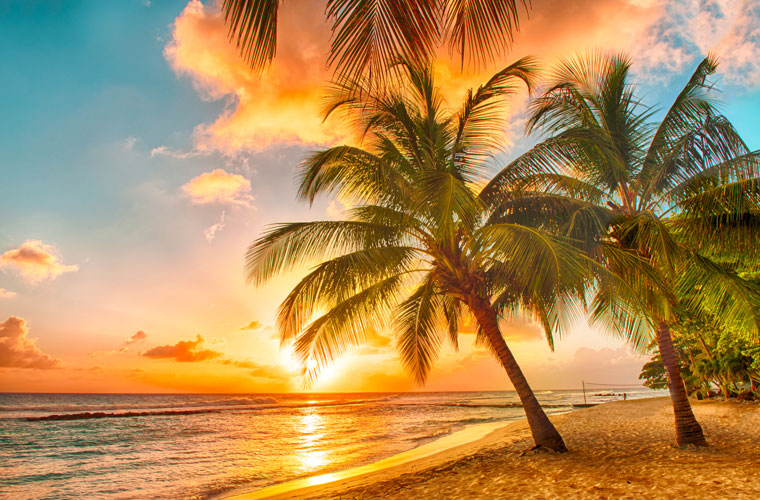 A small island located in the Eastern Caribbean, Barbados is often the first glimpse many transatlantic cruise passengers get of this stunning part of the world after spending a few days crossing the Atlantic Ocean, either directly from Southampton or following a stop in the beautiful Azores. The beauty of Barbados is that it incorporates everything that’s attractive about the Caribbean – the laid back lifestyle, the crystal clear waters, the welcoming locals – and yet also boasts a very rich and vibrant history as a former British colony that’s truly fascinating. Nestled amongst the lush green foliage and the white sandy beaches are outstanding examples of colonial architecture that you just won’t find anywhere else. Barbados has thrived since it was first discovered by the Portuguese, primarily through the harvest of sugar cane and, of course, rum production. 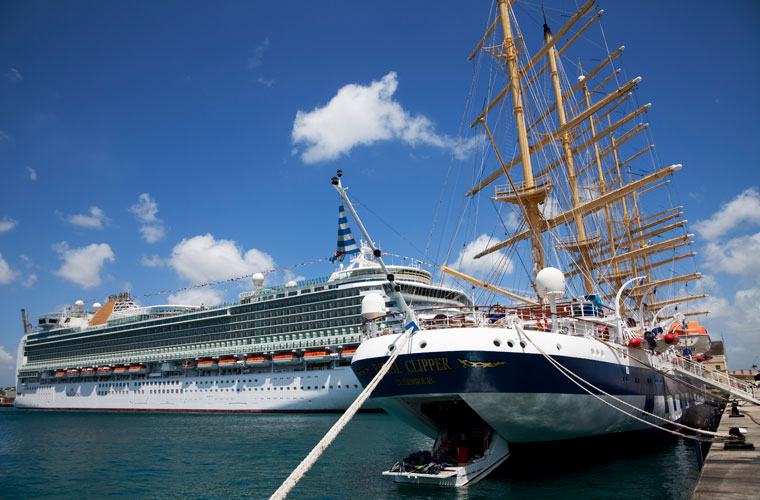 Ships dock into Bridgetown Cruise Terminal in Bridgetown on the western coast of the island. Bridgetown is Barbados’ capital city, and the port is strategically located within minutes of many of the island’s most popular places of interest, whether that be the attractions of the downtown area, the beaches near Batts Rock Bay, the luxury resorts overlooking Carlisle Bay, or the breathtaking natural beauty of Barbados’ forested areas.

Cruise passengers all receive a warm welcome when arriving into port – the Barbados Tourism Authority arranges for live bands to meet each cruise ship as it’s arriving – creating a wonderful atmosphere and showing the hospitality of the Bajan people. Even the port itself seems to be above and beyond what is typically expected, incorporating an entire shopping centre complete with more than 20 shops, 2 al fresco restaurants, and a whole host of vendors selling handcrafted trinkets. You could easily spend an entire day in the Bridgetown Cruise Terminal, but don’t forget to get out and about and see some of the other amazing sights and attractions on the island, too!

What to Eat & Drink

You can’t visit Barbados without sampling its world famous national dish – cou cou and flying fish. This may sound a little strange, but it’s the perfect mix of homestyle comfort food and fresh, nutritious seafood. Flying fish is found off Barbados’ beautiful coastline, and is steamed in a dish to maintain all the goodness and flavour. Cou Cou is the accompaniment, and is very much like a polenta mash that’s had slices of okra cooked into the mixture. While there are many places to try out this classic meal, many locals believe you can’t beat a plate served up by the vendors lining Baxters Road – widely considered to be the life and soul of the Barbados party scene. 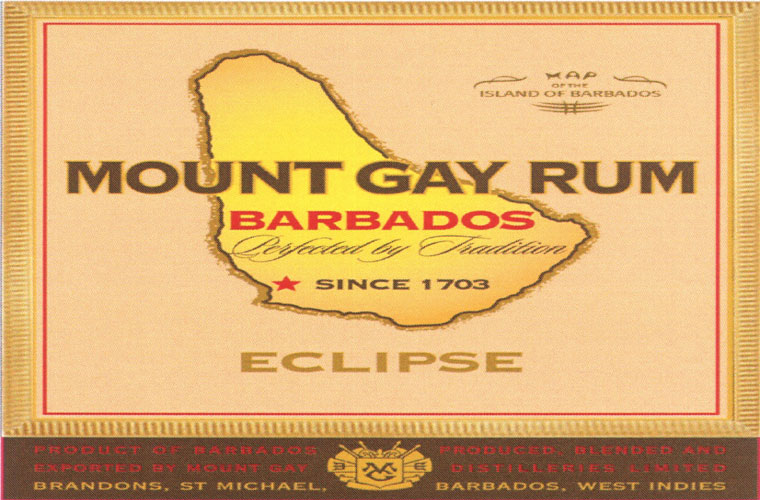 When it comes to drinks, a glass of Mount Gay rum is a must. Mount Gay rum – a firm favourite amongst Caribbean rum connoisseurs – has been produced on the island since 1703, and the working factory can still be toured today (and yes, there’s tastings at the end of the tour!). Caribbean rums differ considerably between the islands, but with Barbados being a former British colony, Barbadian rum is very dark, syrupy, and sophisticated, like the rums produced on other English-speaking islands. Rums produced in the former French colonies tend to be a little spicier, while Spanish Caribbean rums are lighter and a little smoky from the oak barrels. 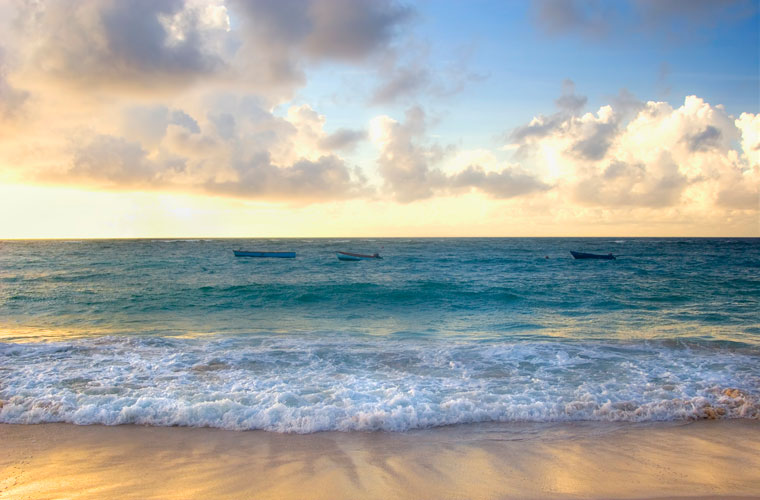 When many people think of Barbados, they think of the blue skies, the white sandy beaches, and, of course, the cocktails. There is very much a laid back beach lifestyle here, but the island also has a very rich and vibrant history, a fascinating ecosystem, and it can really get the adrenaline pumping on occasion! The great, and rather unique, thing about Barbados is that it can be as relaxing or as pulsating as you want it to be, making it an ideal destination for both all generations of cruise passengers.

Whether you’re cruising with young children or are simply intrigued by native Caribbean wildlife, a trip to the Barbados Wildlife Reserve is something any nature cannot afford to miss. Located up in the Farley Hill National Park, the reserve is very much the opposite of a zoo, with animals allowed to roam freely and only very few being kept in cages for safety reasons. One of the highlights is the opportunity to see the Chlorocebus monkey (or ‘green monkey’ as they’re often called). A good tip is to visit in the afternoon for the best chance of viewing the monkeys, as they usually take a wander off the reserve during the morning, returning home for their dinner! 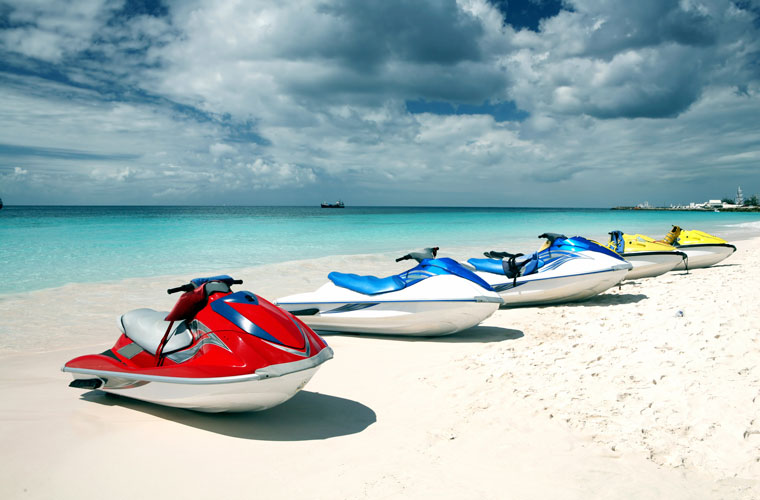 Barbados is famous for its stunning beaches and fantastic watersports. 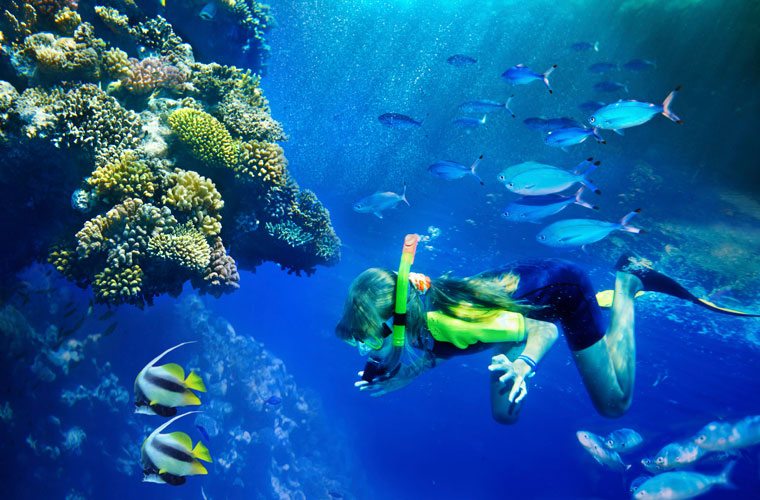 ave you always wanted to try snorkelling? Well there’s no better place than Barbados. Located just south of the Bridgetown Cruise Port, the Carlisle Bay Marine Park is the ideal spot, with calm, clear waters that are protected from the Atlantic trade winds, creating a safe snorkelling area that’s great for beginners. There’s plenty to see here, with 6 abandoned vessels being purposefully sunk to create welcoming habitats for all sorts of vibrant and colourful sea life. As you swim around the old freighters, tug boats, and naval ships you’ll see schools of tropical fish, sea horses, and even the occasional eel. 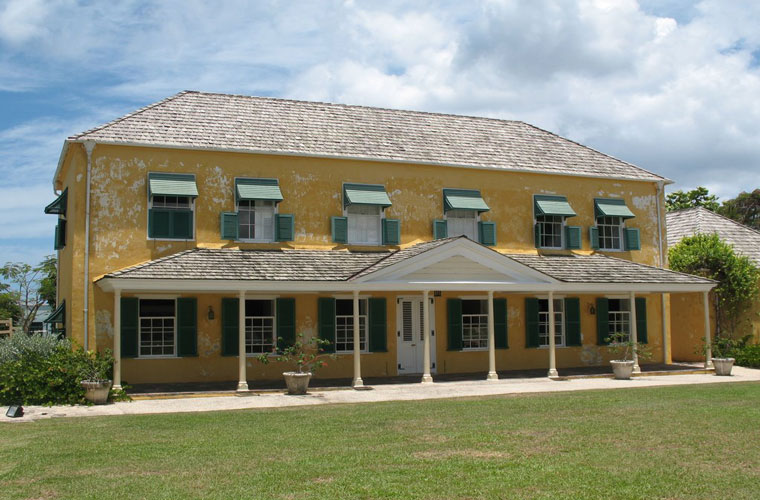 Situated just a short distance from the Bridgetown Cruise Port is what is today known as George Washington’s House, although it was previously known as the Bush Hill Estate. George Washington, the first President of the United States, spent two months living on the plantation in 1751, with the island becoming the only destination outside of the United States to be visited by Washington. A massive restoration project was undertaken as the property became a UNESCO site, but much of the original structure can still be seen today. Following a tour of the house, the adjoining museum offers a glimpse into true 18th century life. 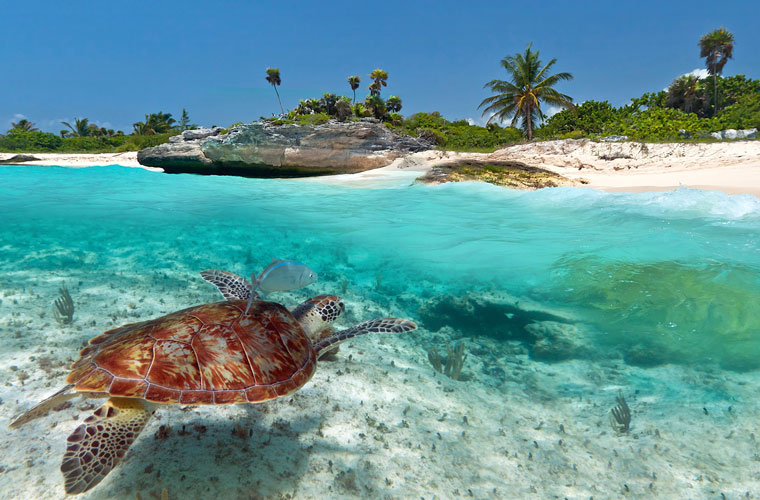 Whether you’re opting for a sunny Caribbean cruise, or are looking forward to a transatlantic crossing, you’ll find that many cruise lines use Bridgetown as an embarkation or disembarkation port due to its enviable location with the Caribbean Sea on one side and the Atlantic Ocean on the other, and because of easy flight access from both the UK and the United States. If you’re starting or ending your cruise holiday in Barbados, it’s well worth adding pre or post cruise hotel stay on the island and using the extra time to discover more of this amazing Caribbean location. 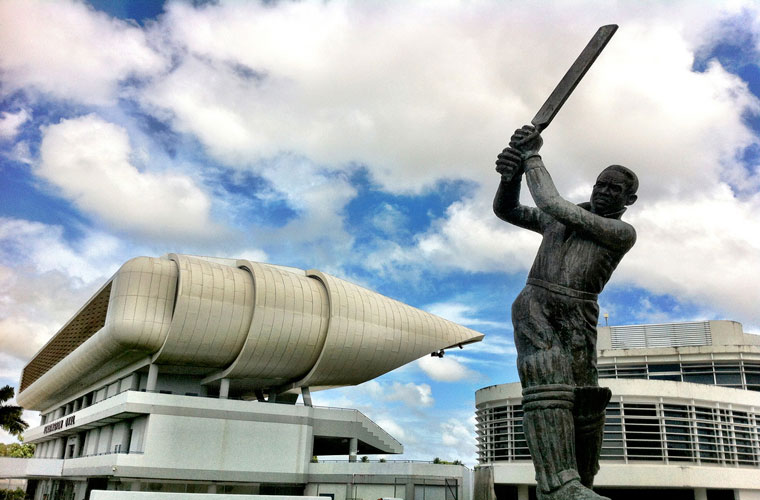 If there’s any nation that can give England a run for its money in terms of cricket it’s the West Indies, and there’s no better place to catch a match than at Barbados’ Kensington Oval. Although used for many purposes, including Bajan Pride games and even a Rihanna concert or two, the stadium is best known for cricket matches, and even hosted the 2007 Cricket World Cup. While England didn’t win, we did beat the West Indies in the Super 8 stage at Kensington Oval, and you can relive all the glory right there at the stadium. 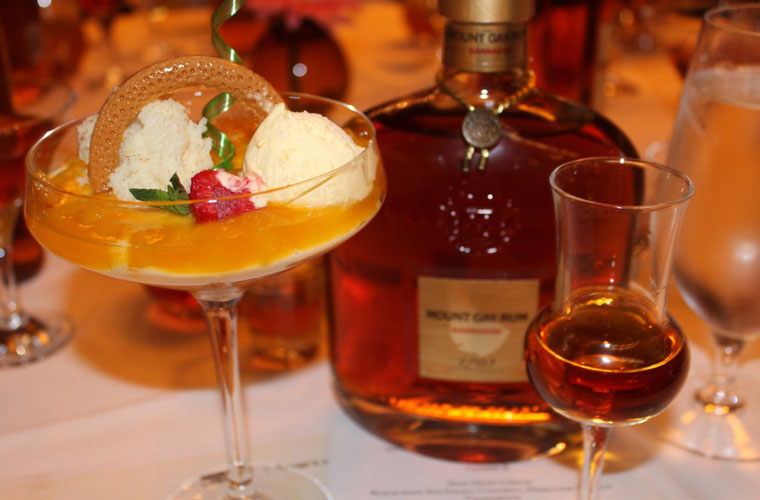 Something that you can’t experience when your ship is docked just for the day in Barbados is the lively Caribbean nightlife. For the best clubs, the most vibrant bars, and the most colourful cocktails, take a stroll along the St Lawrence Gap (or ‘The Gap’, as the locals say), which is considered to be the heart of Barbados’ nightlife scene. The Gap is almost a mile long, and features a range of bars and clubs, shops, restaurants, hotels and resorts, and street vendors selling tasty snacks, all overlooking the beautiful sandy beaches. 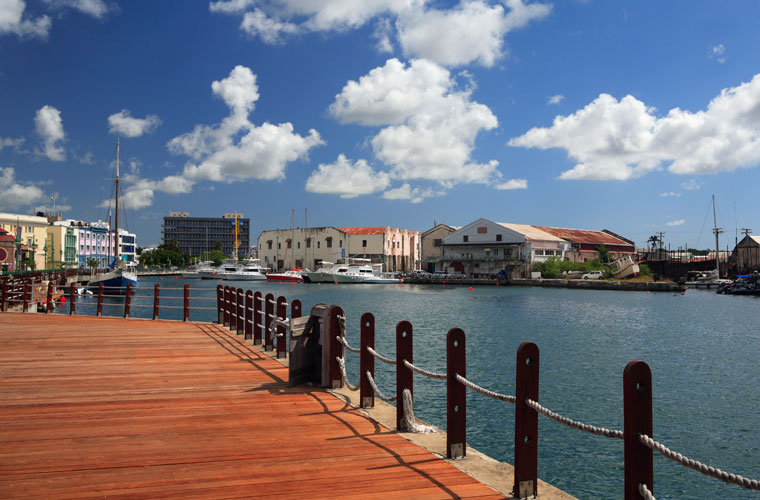 If you want to stock up on authentic Caribbean souvenirs after your cruise to take home to friends and family, then use your extra time on the island to do a spot of shopping. While there are shopping centres in the downtown area, one place that’s highly recommended is Pelican Village, just a short distance from the port. Not only is this little village quite stereotypically Caribbean, with its brightly coloured structures and quaint atmosphere, but it’s also one of the best places to buy Caribbean tropical accessories, inexpensive clothing, and handmade jewellery. 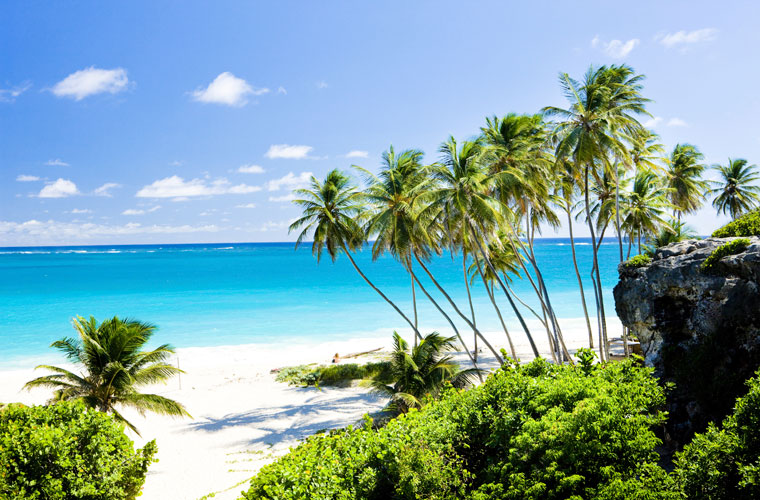 Barbados’ amazing weather means that there’s never a bad time to travel, and cruise lines take advantage of these great conditions – sunny skies, warm breezes, and low rainfall – by offering cruises from Barbados all year round, or by including Barbados as a port of call on many Eastern Caribbean cruises from the United States, or from the UK as part of an exciting transatlantic itinerary. However, there does tend to be an influx of sailings during the winter and spring months, typically between December and April. This is when rainfall is minimal, and the temperatures provide pleasant warmth that’s perfect for us Brits seeking a sunny getaway to escape the winter blues.