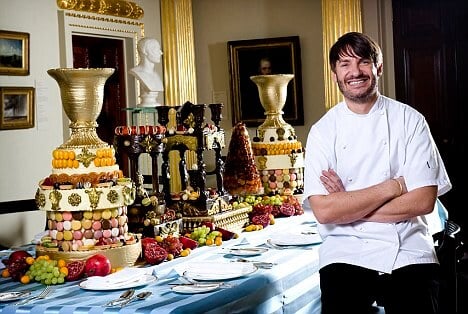 Celebrity chef and Master Patissier, Eric Lanlard was recently announced to be making several appearances aboard P&O Cruises this year and now the master chef has given passengers an insightful treat into his culinary wisdom by presenting a short video highlighting his unique signature afternoon tea that he has developed for a dedicated food and wine themed cruise for P&O Cruises.  The afternoon tea will feature brand new sweet and savoury creations.

The celebrity chef also recently partnered with the cruise line to raise money for Macmillan in a year long partnership which sees its fleet of seven ships playing host to fundraising activities and events. The partnership was launched in style by Macmillan supporter and P&O Cruises Ambassador master patissier Eric Lanlard, who baked green cupcakes for P&O Cruises staff, all dressed for the occasion in Macmillan green t-shirts.  For more details on this click here.

In case you don’t know and in that case you should as he is a patisserie master!  Eric Lanlard is the star of Channel 4’s Baking Mad and Glamour Puds series.  He also boasts an even greater CV thanks to making cakes for Her Majesty The Queen Mother alongside celebrities such as David Beckham and Claudia Schiffer.  This is the first time he has created an afternoon tea specifically for a cruise line and can usually be found at his Cake Boy London café.

The brand new afternoon tea creation provides passengers with something they will have never experienced before on board P&O Cruises and makes for a superb treat.   His bespoke creations include a wonderful combination of contemporary and interactive twists to quintessential British traditions.  From the bizarre to the beautiful you are in for a sensational experience on board.  Highlights of the afternoon tea creations include edible perfume, savoury gruyere cheese eclairs with brie, rocket and red onion marmalade, exotic pop cones topped with orange blossom Persian candy floss and a modern take on the classic Eton mess.

Lanlard said: “When I was invited to create a signature afternoon tea for P&O Cruises, I jumped at the chance! I wanted to design something which had a modern twist and would be more interactive so people could really get involved and enjoy a whole new experience. And I wanted to use ingredients from around the world which people may not have ever seen or tasted before, whether it be Persian candy floss or Malaysian tapioca pearls, it’s important to create something new and fresh.”

Lanlard will feature aboard P&O Cruises Adonia on 22 November 2013 when she sets sail for a 28 night Caribbean no-fly cruise from Southampton.  P&O Cruises are hugely excited to welcome him aboard and we thought what better way to tantalise your tastebuds than to give you a little preview of what you can expect on board this magnificent sailing.

To find out more details on the celebrity chefs sailing aboard P&O Cruises this year click here.

Categories: Food and dining on cruises