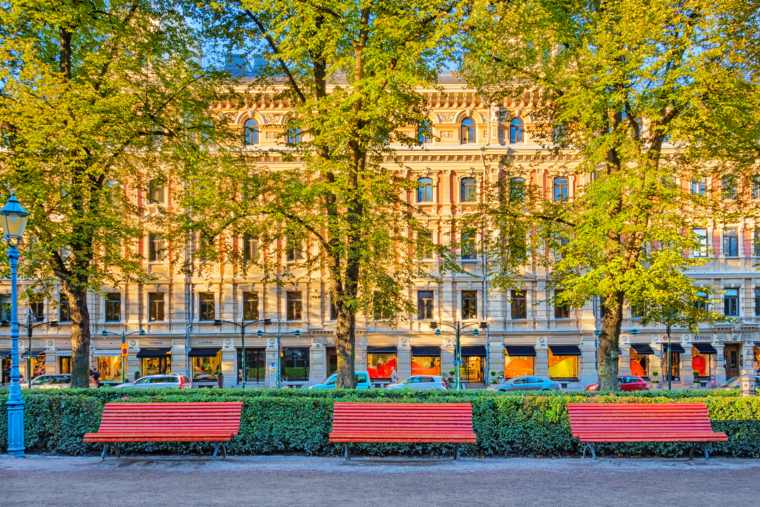 We’ve already lifted the lid on St Petersburg, Copenhagen and Stockholm in part one of our Baltic Sea Treasures blog, and in part two we’re taking a closer look at Tallin, Oslo, Helsinki and Kiel.

Are any of these Baltic cities on your cruise wish list? You can discover the delights of the Baltic Sea with Cunard, P&O Cruises, Fred Olsen, Royal Caribbean and more.

Estonia’s compact capital is more chocolate box charming than Soviet-era stark. Tallinn is one of the Baltic’s most walkable cities and you needn’t venture far from the port to discover its pride and joy. Tallinn’s UNESCO World Heritage-listed Old Town is one of the best preserved medieval towns in the world. The gentlemanly Hanseatic League left behind a warren of cobbled streets, pastel merchant houses and 14th century alleyways leading to suntrap squares that still serve as the social hubs of the city.

Despite its reputation as a living, breathing museum of medieval life, there is nothing antiquated about Tallinn. Locals are quick to point out that the city is one of the best connected in the world, with over 98% of it covered by free Wi-Fi. Some of technology’s leading start-ups were conceived within these centuries-old city walls. There may be sleek skyscrapers and chic restaurants popping up between the ancient church spires and fortifications, but Tallinn hasn’t sacrificed an inch of its historic integrity. Instead, these great strides into the 21st century only add to the city’s charm, creating a destination that effortlessly merges the very best of both worlds.

For those who seek a glance of yesteryear, there are the landmarks; olde-worlde Raekoja plats and its Gothic town hall, Peter the Great’s Petrine Baroque Kadriorg Palace and its endless gardens, and the 400ft tower of St Olaf’s Church on Toompea Hill, from where the scene stretches across the red roofs of the Old Town and past the onion domes of the Alexander Nevsky Cathedral. For those who prefer their days spent in a more modern metropolis, there are the swish shops of the Rotermann Quarter, the cutting-edge architecture of the Kumu Art Museum, and the ateliers, artists and off-beat eateries of Talliskivi Loomelinnak, or Creative City, Estonia’s bohemian hangout. 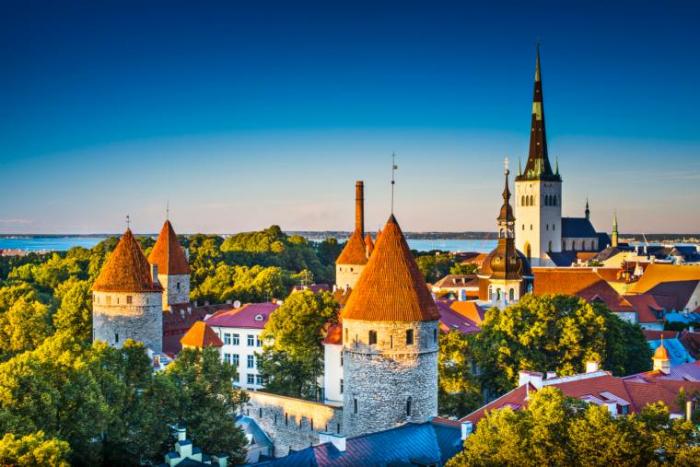 Few destinations can claim to combine an idyllic waterfront, ultra-modern city centre, forested hills, mountainous fjords and stratospheric ski slopes. Oslo can and it does so in style.

The Norwegian capital benefits endlessly from its enviable location between the Oslofjord and hundreds of acres of forest, natural beauty enveloping an ever-growing city centre. Whilst it may not court as much attention as its Scandinavian neighbours, Oslo has become a force to be reckoned with. Eye-catching architecture has sprung up across the city, concentrated on the skyscraper-stacked waterfront and the aptly named Barcode District. If you only visit one attraction before heading off into the great outdoors, make it the Oslo Opera House, a ground-breaking building that emulates the Norwegian mountains and encourages its visitors to take a walk…on the roof.

Oslo offers the best of both worlds. Its world-class museums, urban cafes and vibrant social scene has led to it becoming one of Europe’s most cosmopolitan cities, but its proximity to endless swathes of greenery means you can be in the countryside in minutes.

Located just outside of the city centre, Vigneland Park is the largest sculpture park in the world by a single artist and one of Norway’s most-visited attractions. The park’s 212 bronze and granite sculptures are the life’s work of Norwegian Gustav Vigneland and though some are a little bizarre, a morning in the park is one well spent.

The Oslofjord isn’t the largest or most commanding of all Norway’s fjords, but its islets and rocky shores are within easy reach of the city and the city ferry will take you there for free. The pretty painted village of Fredrikstad is one of the best preserved fortress towns in Scandinavia and many make the trip to see it. The scenic ferry ride departs from downtown Oslo and arrives into the heart of Fredrikstad’s charming Old Town, Gamlebyen. 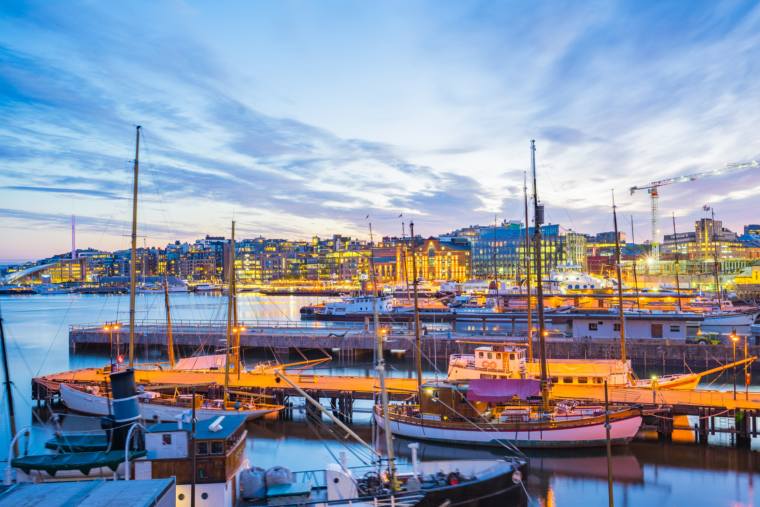 Helsinki often finds itself overlooked in favour of other Baltic cities, but this means that it feels like something of a secret. Crowds are non-existent here and there’s a peace and quiet in the air that is instantly relaxing.

It is several years since Helsinki was appointed World Design Capital, but the design scene here remains one of the world’s most cutting-edge. The Design District is the heart of Helsinki, its 200 plus shops, galleries, design studios and museums connected in a hive of creativity across 25 streets.

While other Baltic states cling to the grandeur of the past, Helsinki strides confidently towards the future with its most celebrated structures. The Kamppi Chapel is a curved wooden creation, designed by the Finnish K2S Architects to provide a haven of calm amidst the bustle of Narinkka Square, one of the busiest places in Finland. We guarantee that you have never seen a church quite like it.

Helsinki’s position at the water’s edge makes getting out onto the sea a must. Take a boat trip to picturesque Porvoo, one of the world’s largest archipelagos comprising thousands of islands and islets. The wooden houses, pink city hall and cobbled main square of Porvoo’s Old Town look just as they did in the Middle Ages and you’ll notice a charming lack of chain restaurants and shops on the quaint streets.

Another must-see is Suomeinlinna, an inhabited sea fortress built across six islands at the entrance to Helsinki’s harbour. Take the ferry over in the winter or the water bus in the summer and follow the blue trail along the fortress’s miles-long fortifications, ducking into dusty tunnels and through handsome parks. There are also six museums spread across the various islands, including one which houses the submarine Vesikko, used during World War II. The Finnish are fiercely protective of their heritage and there are more than 80 museums around Helsinki, celebrating everything from Finnish art and folklore, to mammals and the military. Back on the mainland, the Steven Holl designed Kiasma building is one of Helsinki’s most modern, an art museum that has proven as popular with visitors as it has with locals. 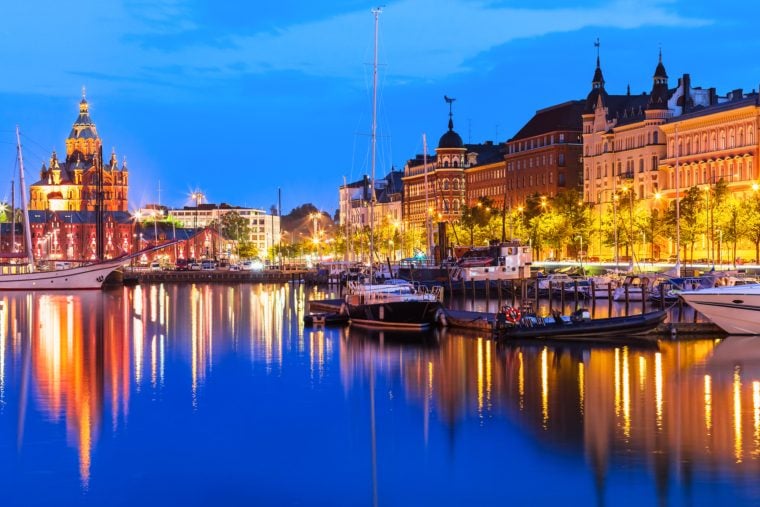 Kiel is a major maritime city at the eastern end of the Kiel Canal; the world’s busiest man-made waterway.

This city by the sea lives and breathes its maritime traditions, the most renowned of which is the Kiel Week regatta. This annual international sailing festival has earned the city a reputation as the sailing centre of Europe, attracting over 500 sailors and millions of spectators from around the world. The event features heavily on themed Baltic cruise itineraries, granting sailing enthusiasts the opportunity to watch the high-tech yachts and historic ships from the Hindenburg Embankment.

Kiel was almost completely destroyed in World War II and has been almost entirely rebuilt since. As a result, much of the city centre is relatively austere in comparison to other Baltic Sea destinations. That said, as a city which lives its life around the water, the Kiellinie waterfront promenade is as impressive as you might expect. An assortment of cruise ships, sailing boats and full-rigged ships litter the atmospheric harbour, where locals gather for ever-changing views across the water and great German cuisine in the cafes and restaurants along the promenade.

It isn’t often considered complimentary to suggest that the best thing about a place is the road out, but for many cruise fanatics and sailing enthusiasts, this is the case with Kiel. The Kiel Canal is up there with the Suez and the Panama as one of cruising’s most iconic crossings, the ships proximity to shore showcasing local life lived alongside the river’s 60-mile stretch. 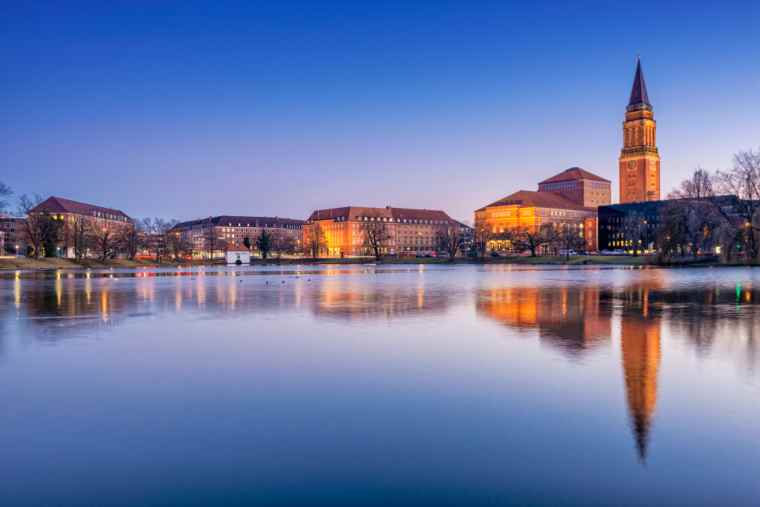