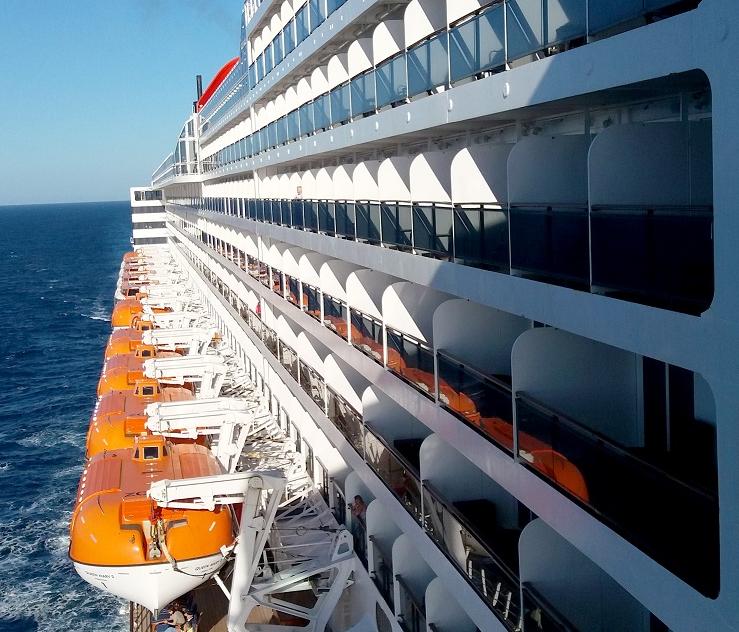 Bolsover Cruise Club’s Mandy Maddison wondered how she’d fill her time on a Cunard Transatlantic voyage. Little did she know that the problem wouldn’t be finding ways to fill her days, but rather finding a way to fit it all in. Here’s her diary of a classic Cunard crossing.

I’m up at 4am, ready to make my way to Southampton by train via London. Once I arrive, embarkation at the terminal is every bit as quick and easy as I had hoped for after such an early wake-up call and in no time at all I am on board the Queen Mary 2 bound for New York. My inside cabin is lovely and a lot bigger than I expected. The sparkling wine to welcome us was a nice touch too.

After meeting the rest of the group, we all dined in the Britannia Restaurant at 8.30pm, which I really enjoyed. Afterwards, it was straight to bed as I was exhausted from such an early start. 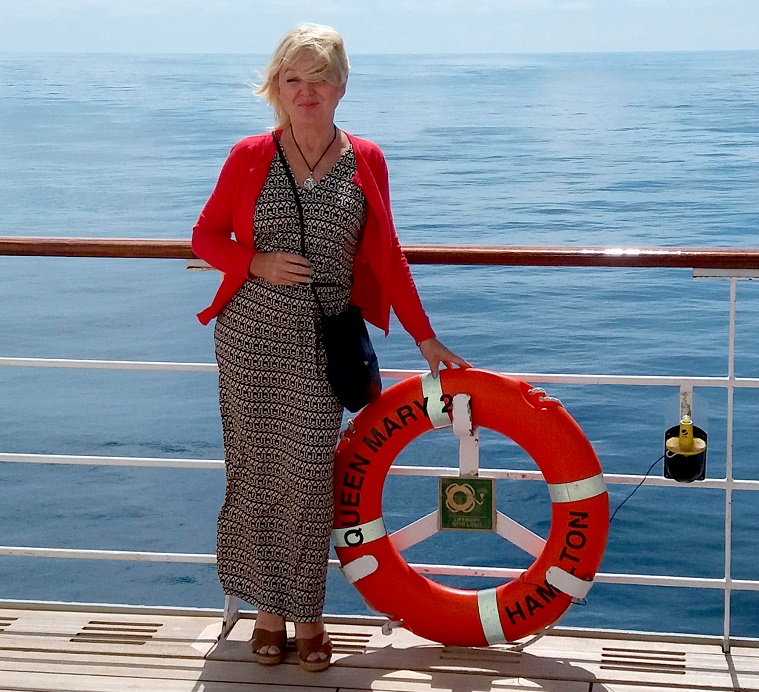 The clocks had gone back an hour overnight and the time we had gained gave us a little extra lie in. A leisurely breakfast in bed was the icing on the cake.

I went to the gym, then joined the rest of our group for a meeting.

After this, myself and Sue had a coffee in the Carinthia Lounge, before taking to the largest dance floor at sea in the Queens Room for a Cha Cha Cha lesson.

We ate lunch in The Golden Lion and at 2pm we joined a line dancing class. The rest of the afternoon was spent lazing by the Pavilion Pool, indulging in afternoon tea in the Queens Room and treasure hunting around the ship.

This evening’s dress code was ‘Black and White Ball’, so it was on with the glad rags. We all met for our evening meal in the Britannia Restaurant, then had a waltz on the Queens Room dance floor, before boogieing in the G32 nightclub until late. 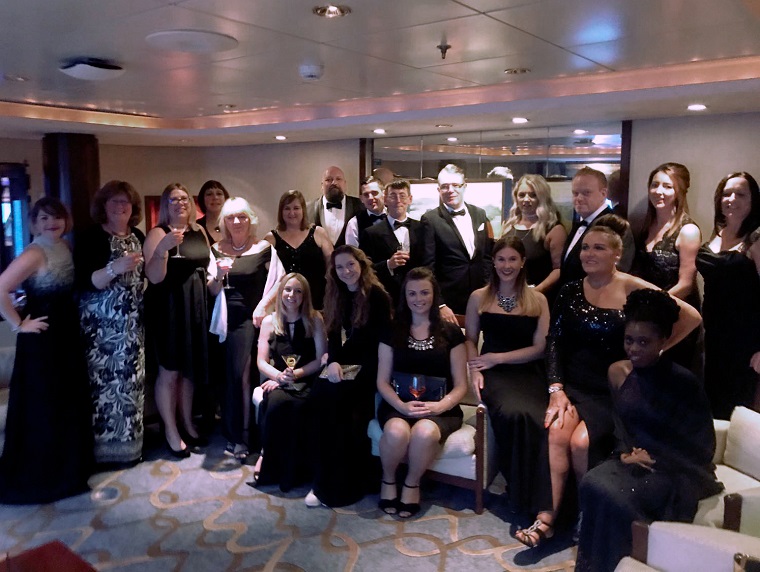 Breakfast was in Kings Court and then it was off to my first ever fencing lesson, which was amazing!

Afterwards, I went for a very windy walk around the promenade deck, had a coffee in the Carinthia Lounge and joined a ballroom dancing class; this time it was the slow waltz.

I ate lunch in The Golden Lion, caught the star show in the Planetarium and did a bit of relaxing by the Pavilion Pool.

Later, we ate in The Verandah, which was such a treat! It was formal night again and everyone looked great. After dinner, we watched a Broadway-style show at the Royal Court Theatre, before going to bed exhausted! Whoever said we would be bored on a Transatlantic crossing? 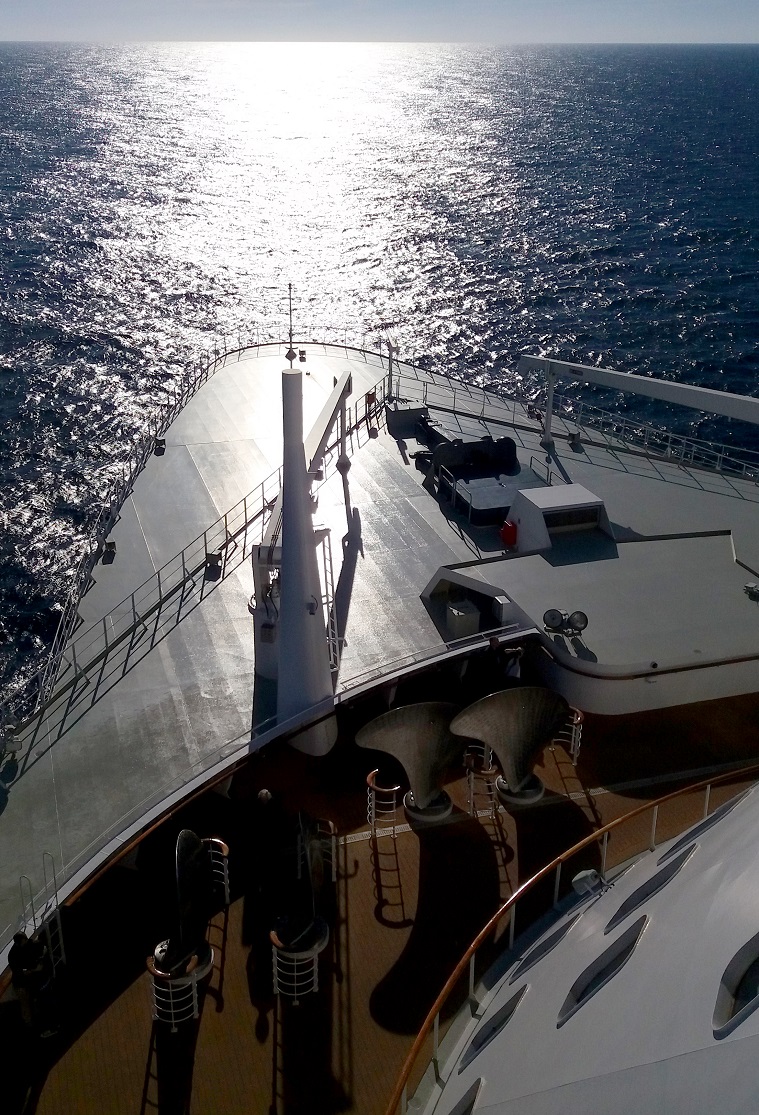 This morning we had a meeting with the ship’s entertainment manager, Jason Ward, before heading to the Royal Court Theatre to listen to the recollections of a group of World War II veterans. It was so emotional.

Later we were treated to a Godiva afternoon tea; what a treat!

Sue and I went for a walk around the Observation Deck and found the scenic lift. There’s so much on this ship that you don’t even know about. We then had a tour of the bridge which was very interesting.

This evening was spent having dinner in the Britannia Restaurant, before dancing in the Queens Room. 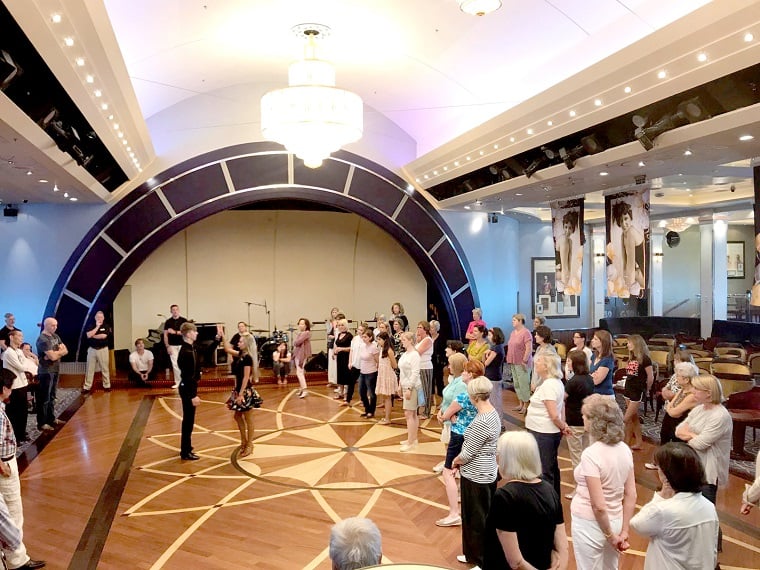 The day started with our second fencing lesson, followed by breakfast in Kings Court. Afterwards, Sue and I spent some time in the Canyon Ranch Spa, had lunch in Kings Court and were treated to a mixology class.

Later, I went back to the spa and decided to have a full-body massage. It was absolutely amazing.

We dined in the alternative dining venue at Kings Court this evening, then headed off to the theatre to listen to Jenna Lee-James. She has a fantastic voice and it was quite emotional. 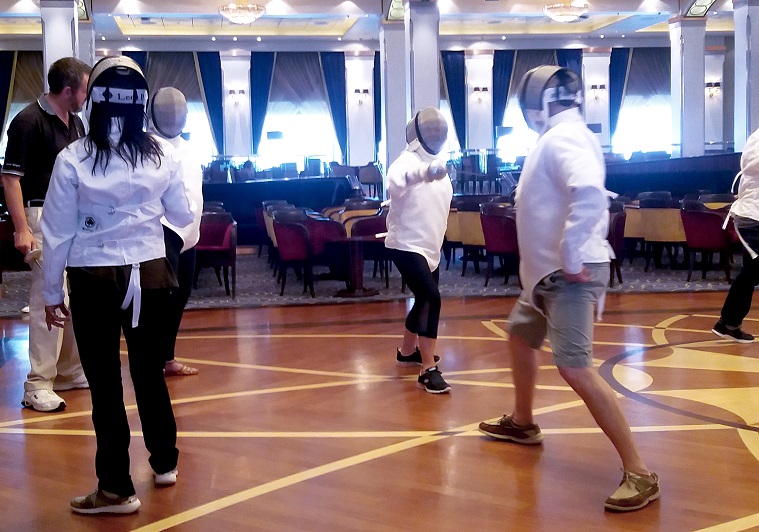 After breakfast, we met in Sir Samuel’s for coffee, then went to a jive lesson in the Queens Room, which was great fun.

Lunch was spent in the Golden Lion, which was fast becoming a favourite.

Tonight’s theme was a 1920s ball and we were all dressed to suit. Our evening meal was enjoyed in the Britannia Restaurant, then it was off to the Queens Room again; another favourite! I had the honour of dancing with Steve, one of the World War II veterans. 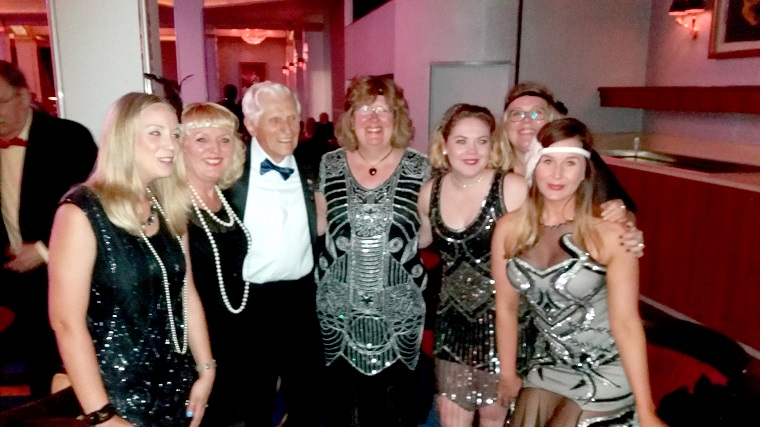 We arrived into Halifax, Nova Scotia, and after breakfast Sue and I went for a stroll along the quay before our trip to Peggy’s Cove. The scenery was stunning.
On our return to the ship, we sunbathed for a while and enjoyed the sail away party.

After lots of activities over the last few days, Sue and I decided to spend the evening in our cabin, watching films and enjoying the fantastic room service. 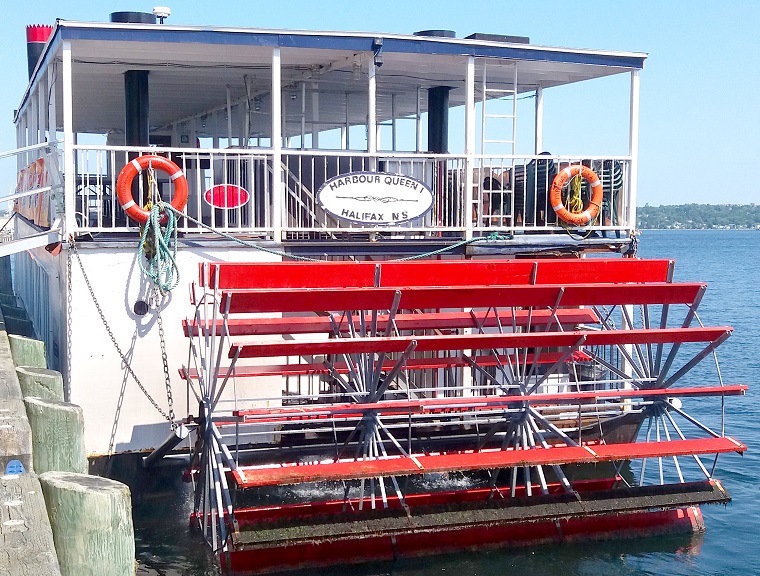 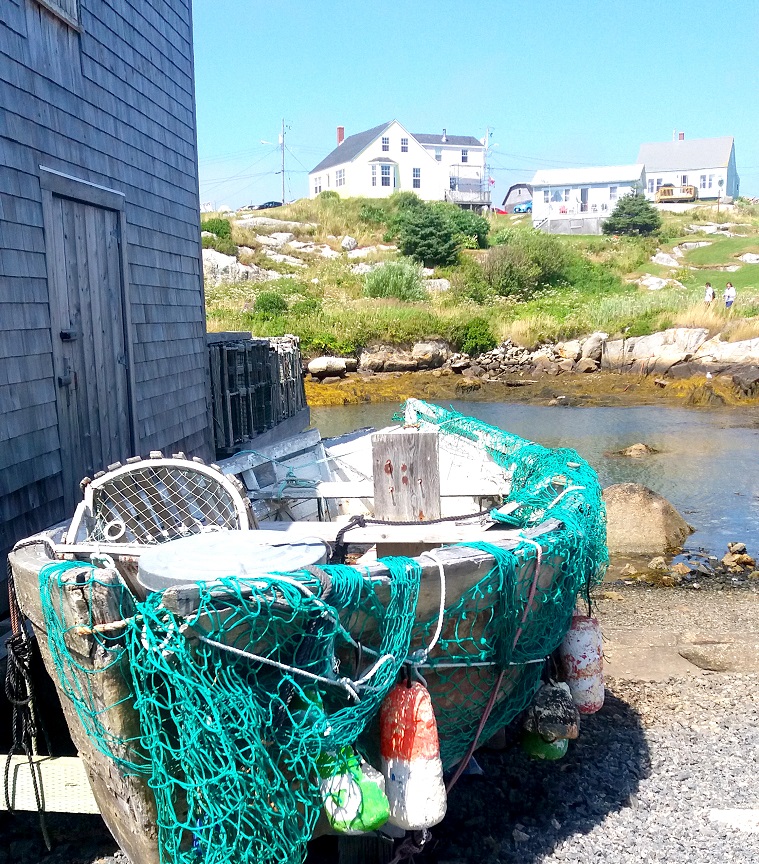 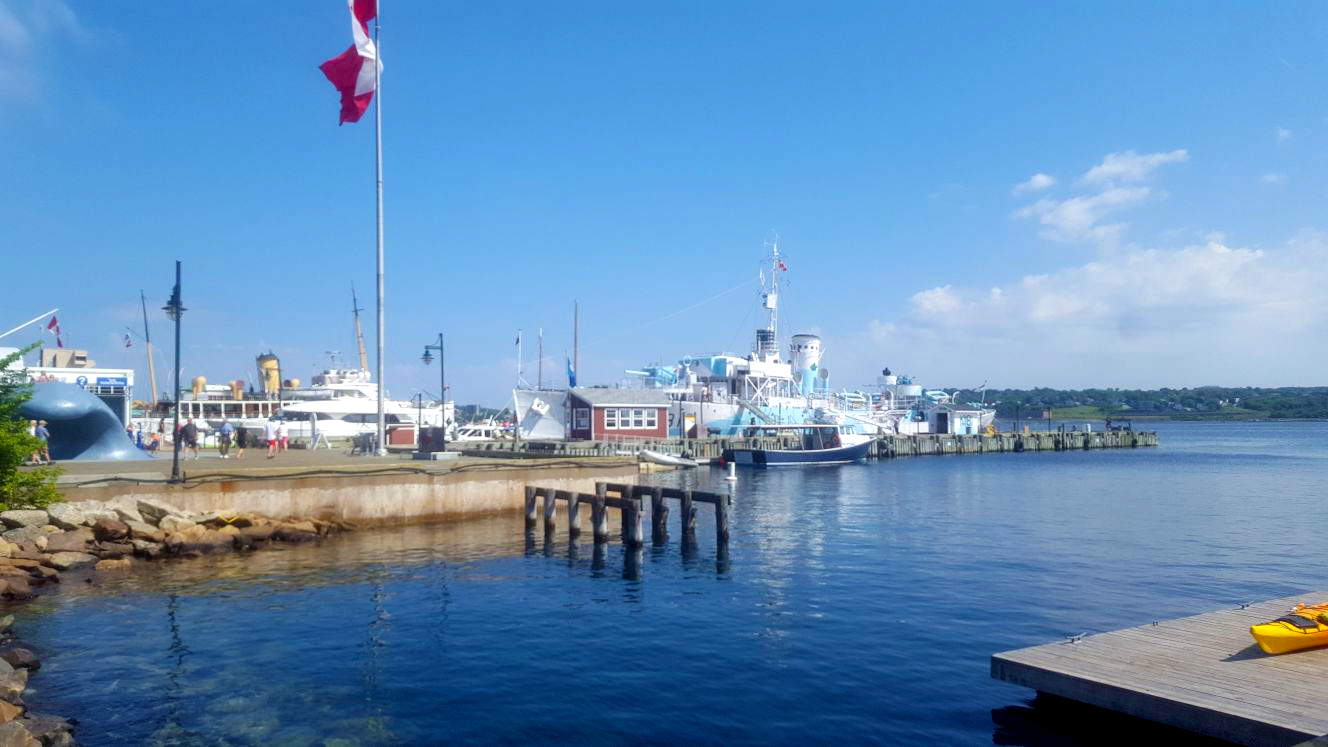 It’s 9am and time for our third and final fencing lesson. I loved it! Afterwards, we all met and shared our thoughts on the last week at sea. Later, we spent some time relaxing in the spa, then went for lunch in The Golden Lion.

The blog I had written on my Cunard experience had won me the amazing prize of a champagne afternoon tea, along with a beautiful designer handbag by Furla – what a fantastic prize! – so I spent the afternoon being thoroughly spoiled!

This evening saw us meet in the Commodore Club for pre-dinner drinks and I took the opportunity to show off my new handbag. We had a little wander after dinner, then went to bed early, ready for an early start tomorrow to see in New York. 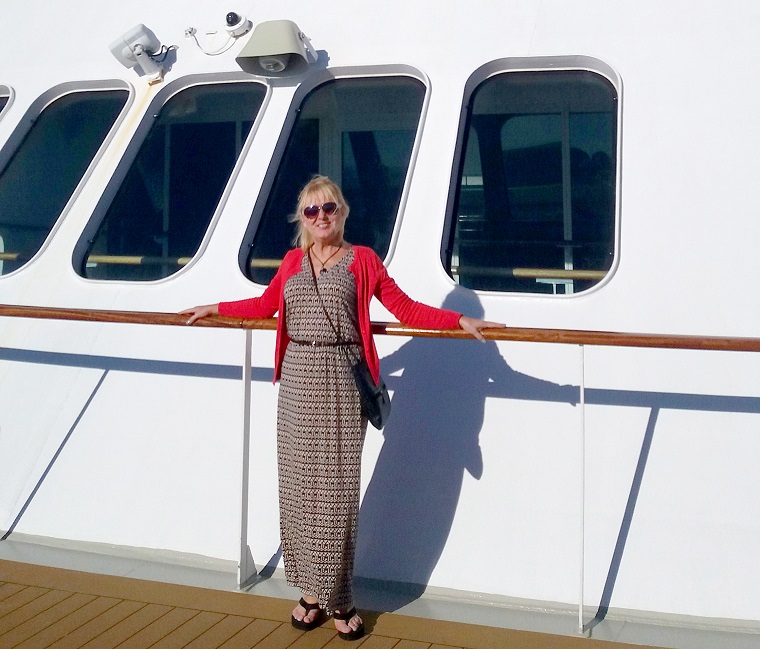 I was up at 4.30am to see us arrive into New York and what an experience it was!

A few hours later at 8.30am, we disembarked the ship and took the coach transfer to our airport hotel. This should have taken around 40 minutes however, it took more than three hours. We sat on the coach in port for over an hour, then did a tour of all the terminals at JFK Airport. We kept asking the driver when he was going to take us to our hotel and he replied that he was Croatian and couldn’t speak much English. By the time we made it to our hotel, it left little time to go back into Manhattan but we were determined not to let it spoil our plans. We took a taxi to Times Square to experience the atmosphere and do a little shopping. We managed to have a couple of hours in the city, which was great. Later we took a taxi back to the airport hotel, followed by a transfer to the airport for our overnight flight to the UK.
As I looked back on the last nine days, I could honestly say that it had been one of the best experiences I had ever had. The food and dining was superb, the quality of the entertainment was excellent and the abundance of things to do on the cruise, from relaxing in the spa to having fencing lessons, was endless. I would do it again in a heartbeat. 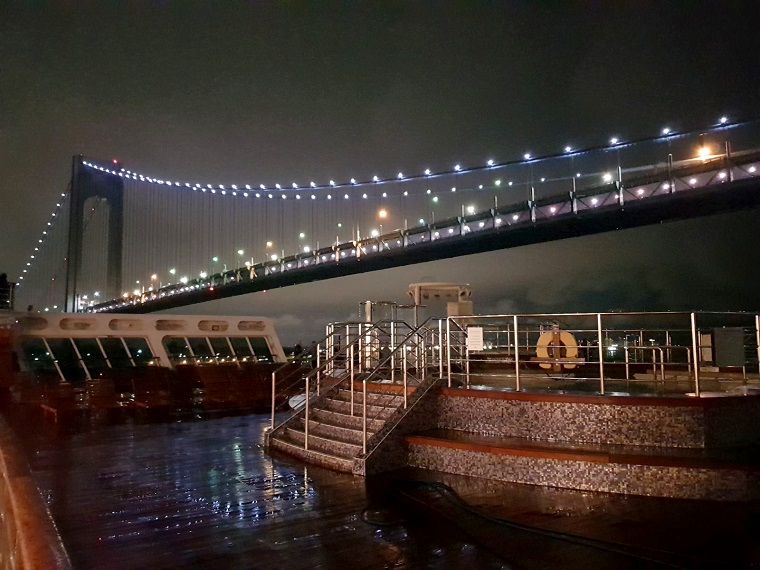 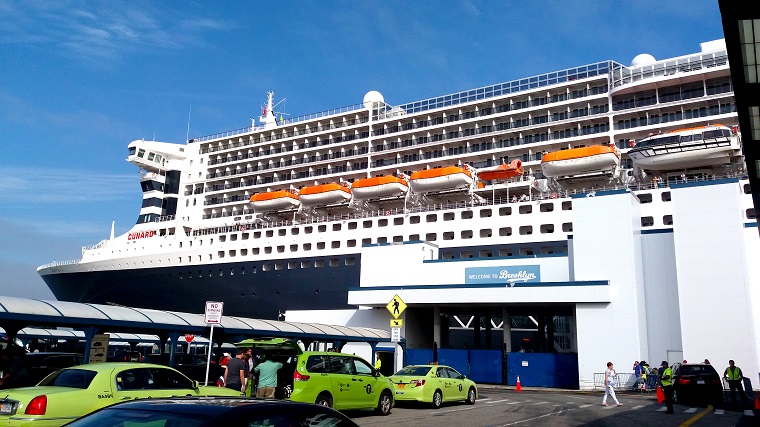