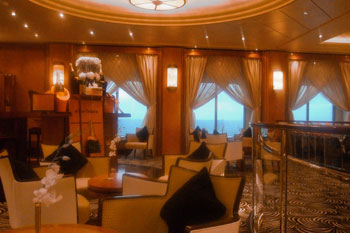 By day 5, I felt I had finally become familiar with the ship.

The Queen Mary 2 is a lot larger than the ships I had cruised on previously, so it took a few days before I managed to get my bearings and find my way around.

Once I did, I realised that I wasn’t simply on a ship, I was a part of a real floating city.

If you wanted to enjoy a good night out, there are perhaps more varied choices onboard the QM2 than there are in some cities. Ranging from the British-style Golden Lion pub serving up classic pub fare to the more sophisticated champagne and whiskey bars, it was easy to find an environment and atmosphere to suit how I was feeling each day. 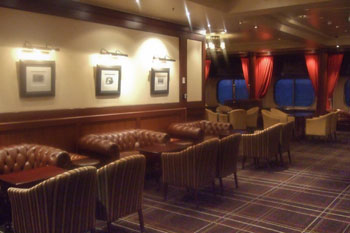 Alternatively, if you’d rather a quieter, more relaxed activity, the onboard library was well stocked with everything from travel books to celebrity biographies, and war history to gossip magazines.

I found what I feel is a real hidden gem on the QM2. The library has amazing views across the front of the ship, and I often chilled out here after breakfast each morning.

While the QM2 is renowned for being large, what many people don’t know is that is actually has one of the biggest galleys at sea. The galley of the Britannia dining room is considerably bigger than the kitchens of some of the world’s top restaurants, and even includes escalators and lifts!

The galley hold many world records, as does the planetarium, Illuminations, which remains the only planetarium at sea today. The shows here were spectacular, and were always full of passengers wanting to learn more about the universe. 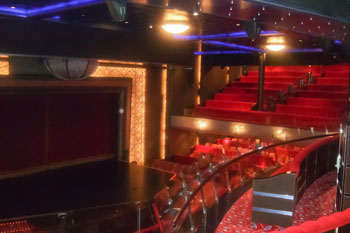 In addition to the shows, there was also a daily astro-bulletin, explaining the star patterns and activity over the past 24 hours. In between the planetarium shows, Illuminations transformed into a cinema, showing both classics and modern movies such as The Apartment and The Great Gatsby.

In terms of luxury, the QM2 houses not one but four fine dining establishments – the Britannia dining room (named after the very first Cunard ship), the Princess Grill, the Queen’s Grill, and the Todd English restaurant.

There was also a multi-venue spa which included relaxing, adults-only pools and hot tubs, multiple treatments such as hand and foot massages, facials, and hot stone treatments, and beauty salons so that passengers could have their hair cut, coloured, and styled before formal nights, or even have botox!

At first, I was concerned that I would struggle to fill six full days at sea, but it’s important to remember that a transatlantic voyage on the QM2 isn’t merely transportation, it’s an experience.

The journey is comparable to going on a week-long city break – there was always something new to explore (I didn’t find the bridge-viewing platform until the final day onboard!), new activities going on, and, shockingly, I actually found myself and my family were more entertained and catered for than in some major UK towns and cities.

Boredom certainly isn’t a word that entered our vocabulary during the voyage!