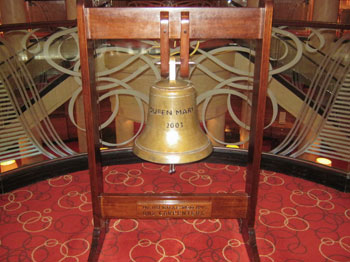 One thing that became abundantly evident upon boarding the Queen Mary 2 is that she is by far one of the most luxurious ocean liners that has ever been built.

The interior decor, design, and artwork is grand, to say the least, and some travellers who are perhaps more accustomed to sailing on the more contemporary ships operated by the likes of Royal Caribbean and P&O Cruises, for example, have reported Cunard ships, especially the flagship QM2, as being a little ‘stuffy’ because of the intricate and somewhat overwhelming fixtures and fittings.

I myself will readily admit that I enjoy things that are modern and contemporary, and I wondered how I would find life aboard one of the world’s most opulent liners.

What I discovered, is that, despite outward appearances, Cunard has a very cheeky, playful side that many travellers never take the time to discover.

One of the best examples of this ‘alternative’ Cunard can be seen on the wall carving murals on deck 2, lining the corridors of the Grand Lobby.

One the surface, these murals are very traditional and classical in design, portraying a definite travel theme, with each carving depicting a different continent.

For example, I could see American football players adorning the North American mural, Greek Gods watching over the European mural, and all manner of wildlife carved into the African mural. However, look closer, and you may well spot a very familiar cartoon character, chilling out in his favourite armchair – yes, Homer Simpson is cleverly hidden amongst one of the murals!

While Cunard remains a cruise line that pays homage to the golden era of cruising, it has also incorporated many modern aspects, helping the line to appeal to all passengers, both old and young.

As three generations of females travelling together, we certainly found that all ages, and all interests, were well catered for on the QM2.

Art onboard the QM2 isn’t just about the decor, however, and day 2 on the ship brought the fruit and vegetable carving demonstration which is something I had been very keen to attend.

Having travelled on other cruise lines, I had seen these fascinating natural sculptures dotted around the restaurants and buffets, but I had never before had the chance to see the skilled chefs in action. 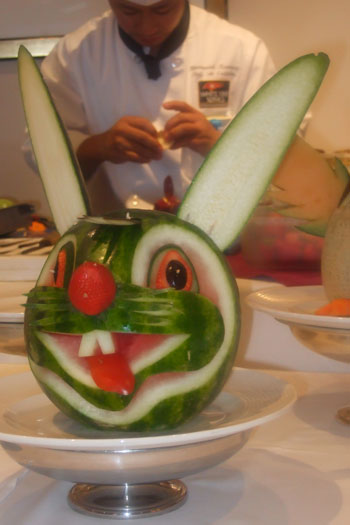 Three of the most artistic and creative chefs aboard the QM2, including one of the senior chefs, Menard, gathered in the Kings Court buffet to show how they create the amazing displays.

Taking just a matter of minutes, the three chefs created ducks, rabbits, and flower bouquets from the likes of watermelons, bell peppers, oranges, and olives, making it look like the easiest thing in the world!

As the audience watched in awe, the chefs explained that this particular skill tends to be something you’re born with, and many carvers come from very creative families. Regardless,

In terms of the arts, rather than artwork, Cunard have a very close working relationship with RADA (Royal Academy of Dramatic Art), offering drama workshops, dance performances, and literary readings.

Despite being tired towards the end of day 2 after exploring the ship, I headed to the Winter Garden bar to take in readings from Jane Austen’s Pride and Prejudice, and I’m so glad I did.

The readings were captivating, and it was also a good opportunity to check out this venue. Classed as one of the more informal social venues on the ship, the Winter Garden is a lovely, calm, spacious area with wicker chairs, lavender, and trees, reminiscent of a typical English country garden. If you’re sailing on the QM2 and are looking to relax with a quiet drink, the Winter Garden is by far the most laidback bar on the ship.