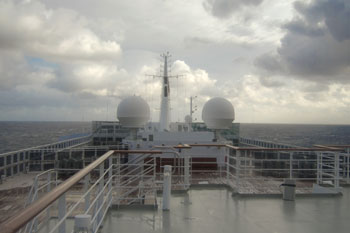 Day 3 of the voyage was a very special one indeed, especially for someone like me with a deep interest in cruising, both past and present.

Thursday 21 November just happened to be the 226th birthday of Cunard founder, Samuel Cunard, it was the day we were to pass near to the final resting place of the doomed RMS Titanic (we reached the nearest point, 82 nautical miles south of the wreckage, just after midnight).

it was the day of the prestigious Commodore’s cocktail party where I was able to mingle amongst both Commodore Christopher Rynd and the Queen Mary 2’s Senior Officers, and it was also the day we sailed through Tropical Storm Melissa.

Today I discovered more about cruising than ever before!

Being at sea for days on end may seem dull to some, and I admit that when I’ve cruised before I’ve always opted for itineraries with minimal sea days, but being largely isolated from society, miles away from the nearest stretch of land (Sable Island, Nova Scotia, was the closest we came to shore until we sailed north of the Azores towards the end of the voyage), was an excellent chance to learn about the history of transatlantic cruising.

The QM2 boasts a number of history corridors on deck 2 which were hugely fascinating.

It’s here I learnt a great deal about both Cunard and about cruising in general, for example, watching the men and women waltz into the dining rooms dressed to the nines, it was interesting to learn the origins of ocean liner formal wear.

In the 19th century, passengers typically wore practical clothing so make it more comfortable for walking the long corridors of the ships, and to facilitate evacuation in case of an emergency. However, as the 1900s approached, and cruising became a very popular form of travel, books were published which gave potential passengers some handy hints and tips for sea life.

One tip that was widely accepted was to dress smart. If passengers were washed overboard, or if the ship sank, it was believed that smart attire would indicate wealth, and would expedite the identification process and garner respect from the authorities.

The history corridors also included diary excerpts from past passengers, many of whom remarked how easy it was to get to sleep with the gentle rocking motion of the Atlantic. This was true, even when sailing through the big storm. 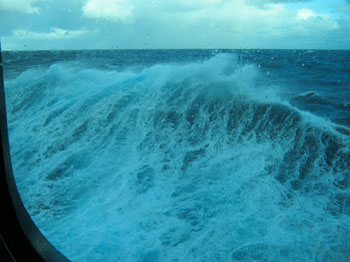 The Commodore had informed passengers upon boarding that the QM2 was due to hit Tropical Storm Melissa today, but that it was not something to worry about.

Despite this, day 3 was the day the sick bags were placed in the public areas, and I began to become a little worried, especially as my 2 year old daughter had never cruised before, and I had no idea whether she would be affected by the ship’s movement.

Remarkably, although the waves were battering against the windows on decks 2 and 3, and some of the upper decks were closed due to high winds, the effects of the storm were barely noticeable, and this is where Cunard, and the Queen Mary 2, really stand out amongst the competition.

As Commodore Christopher Rynd explained at the evenings cocktail party, the QM2 isn’t a cruise liner, it is an ocean liner, and it is the largest ocean liner in the world.

With four stabilisers on board, the QM2 is especially designed to cope with harsh conditions, and she sailed through the storm effortlessly.

Not once did I notice any passenger feeling under the weather. Instead, everyone took shelter inside, watching the dolphins jumping through the waves in the distance.