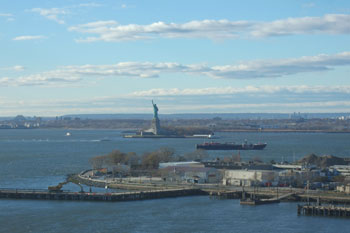 Jen Watts travelled to New York with her family and then set sail back to Southampton on Cunard Line Queen Mary 2, the journey lasts 7 days and everyday is spent at sea.

We asked Jen to write a blog about each day and take some photographs so you can experience her journey first hand!

The first day concists of boarding the ship and setting sail late afternoon, this is Jen’s account as the QM2 slowly left the Big Apple!

When many people think of New York City, they tend to think of Manhattan, with its skyscrapers, bright lights, and some of the best shopping opportunities in the whole world, but the city is actually much more than the island of Manhattan, as I was about to find out.

Cunard’s flagship, the Queen Mary 2, sails from the Brooklyn Cruise Terminal when making eastbound transatlantic crossings, situated in the up-and-coming Red Hook area, which is becoming a hotspot for young professionals and families.

The port is relatively new, having been opened in 2006, and has fast become the favoured port in the New York area, boasting 200,000 square feet of usable space, and room for 800 passengers at a time to relax before boarding their ship.

Previously, the QM2 sailed from the New York Passenger Terminal on the west 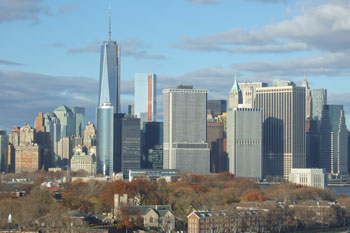 side of Manhattan, but both Cunard and Princess Cruises, who operate very large ships, have found the newer Brooklyn terminal more accessible. As I learnt from chatting with other passengers, this move has been somewhat controversial.

The New York Passenger Terminal is far closer to all the major NYC attractions, such as Broadway and Times Square, and undoubtedly allows for passengers to make the most of their time in the Big Apple.

I have to admit that when I discovered I would be setting sail from Brooklyn, I was a little disappointed that I wouldn’t be amongst the excitement in the bustling heart of New York, but I’m happy to report that the disappointment faded to nothing once I boarded the QM2, and headed up to Deck 7 – the prom deck.

Although a little chilly and with a touch of wind in the air – not unexpected for the middle of November – the skies were a brilliant shade of blue and the sun was shining over the New York skyline, allowing for the most amazing views from this prime vantage point aboard the QM2. Interestingly, I have heard from others who have sailed from the New York Passenger Terminal that, being docked right behind the skyscrapers on Manhattan’s west side, the views from the ship are not much to write home about.

Docking in Brooklyn, however, is a completely different story. Standing on the deck, overlooking the Statue of Liberty, Battery Park, and One World Trade Center (previously known as the Freedom Tower), was something I will never forget and, before long, the sun began to set. 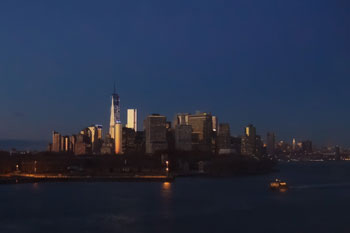 As the eerie glow of the sunset transformed into darkness, the city did just the opposite – the lights lit up to form the outline of the famous NYC skyline, and the floodlit Lady Liberty made me think of the golden era of cruising, when passengers would sail past Liberty Island on their voyage to the United States in search of the elusive American Dream.

Well-dressed men and women crowded the prom deck (even on embarkation day, the smart dress code seemed to be well adhered to), armed with complimentary glasses of champagne and sparkling wines to wave goodbye to the city as we sailed towards the Verrazano Bridge. Although tired from the long flight from Heathrow to JFK, staying up to see the QM2 sail under the bridge was a must, as, due to the tall funnels atop the ship, there was just 13 feet of clearance!

The ship continued sailing across towards Nantucket, before beginning the transatlantic crossing in earnest.