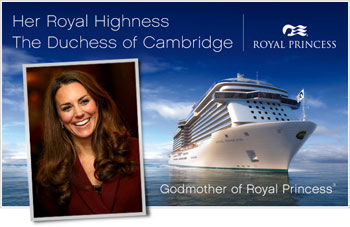 Within the next few years, cruise passengers can expect to see an influx of new vessels setting sail around the world.

From P&O’s Britannia and the Princess’s Regal Princess to Royal Caribbean’s Quantum of the Seas and the NCL’s Norwegian Escape, the cruise industry is gearing up to offer guests even more choice regarding facilities, accommodations, and dining options at sea.

All new ships due to be launched shortly have been, or will be, assigned Godmothers.

But what is a cruise ship Godmother, and what does she do?

The History of Cruise Ship Christenings

The ceremonial naming of a new vessel before setting off on its maiden voyage has been a tradition since the time of ancient Greece, and very possibly before.

Back during the reign of the Greeks, Romans, and Egyptians, quite often blood was smeared onto the ships’ bow – a sacrifice to the Gods, asking for safety at sea in return.

It was very much a strong and widespread belief at this time that an un-christened ship, one that was at sea without the prior approval of the Gods, would succumb to a terrible fate.

The concept evolved in later years, with the sacrifice taking a back seat, and another ‘christening fluid’ used. In the United States, this was often a blend of waters that had been sourced from multiple important rivers across the country – particularly from those on Native American land.

Today, however, the notion of praying for safety has been downplayed, replaced more by a lavish public display.

In adding to the extravagance of such an occasion, champagne is the preferred ‘christening fluid’, with good luck and fortune said to come upon any ship which has a bottle broken across the bow.

What Does a Godmother Do? 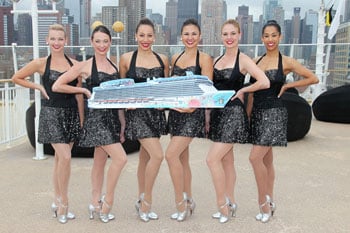 The role of the Godmother is very varied, with some continuing to be quite involved with their ship, and others playing only a minor role in the naming.

Quite simply, a Godmother’s only official duty is to name the ship. However, some Godmothers from the entertainment industry, such as the Rockettes (Godmothers of the Norwegian Getaway), have performed a number of shows on board the ship since its launch in 2013.

Some have cited this example as bringing the role of the Godmother into the 21st century, predicting that Godmother duties will soon be evolving.

Who is Godmother Worthy?

In the past, cruise ship Godmothers were most notably UK or international Royalty, or the wives of those either holding prestigious positions within the cruise line, or those of other important figures around the world, such as Ginny Ueberroth whose husband Peter acted as Chief Executive at the 1984 Olympic Games. 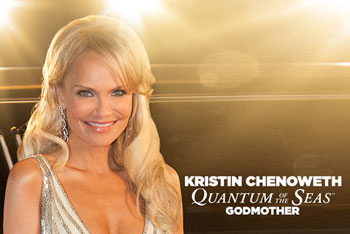 However, as things have progressed, and the reasons for naming ceremonies have evolved, we’re starting to see less formal figureheads, and more Godmothers who are in the public eye.

While naming ceremonies in the past had the sole purpose of asking for safety from the Gods, today these ceremonies are almost entirely for publicity, entertainment and marketing purposes, with thousands of cruise lovers turning up to witness these historic events.

In terms of publicity, those aren’t well known to the general public, aren’t going to catch the eye. Instead, we’re now seeing Hollywood actresses, such as Kristin Chenoweth and Whoopi Goldberg, TV stars such as Trista Sutter and Kim Cattrall, and the new generation of royals, such as Catherine, Duchess of Cambridge.

Back in the times of Ancient Greece, it was believed that if a vessel was not splashed with a ‘christening fluid’ – often water or blood at such as time – that it was a sign from the Gods that the ship should not be taken out to sea.

In fact, even as late as the 1890s, many cruise lines refused to allow their newest additions to set sail without a proper christening. Fortunately, most namings of new ships in recent years have gone without a hitch.

Except, of course, in the case of the naming of Cunard’s Queen Victoria back in 2007. 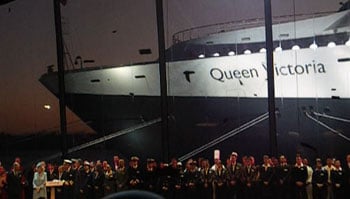 In a controversial move for Cunard, and one that apparently sparked shocked reactions from the royal household, the first ever non-monarch Godmother of a Cunard vessel was chosen – Camilla, Duchess of Cornwall.

Herself somewhat of a controversial figure, loyal Cunard passengers were certainly surprised that a line known for entrusting the naming of their ships to Queen Mary, Queen Elizabeth, and Queen Elizabeth II in the past, had opted, for the first time, for a non-queen to christen a queen.

This was seen as a bad omen right from the beginning, and things continued to get worse.

During the highly publicised ceremony, the worst thing that could happen, did happen.

The champagne bottle that was thrust against the Queen Victoria failed to break.

While the ship would have been taken back to a dry dock in the 19th century, today, the concept of ship namings is merely ceremonial, rather than as a sign from above that the ship will remain safe at sea.

Therefore, the ship was declared fit to sail, and soon began voyages around the Canaries and Mediterranean.

However, an incredibly rare situation occurred just three weeks after the naming ceremony, on the ships second voyage, approximately 80 passengers became ill on board with the norovirus bug, with some confined to their cabins for the 16 night journey.

Such an issue is extremely rare and usually down to passengers failing to disclose prior symptoms before boarding but in this case, it could be considered something more….think cruise ship christenings are purely ceremonial? We’re not so sure…!