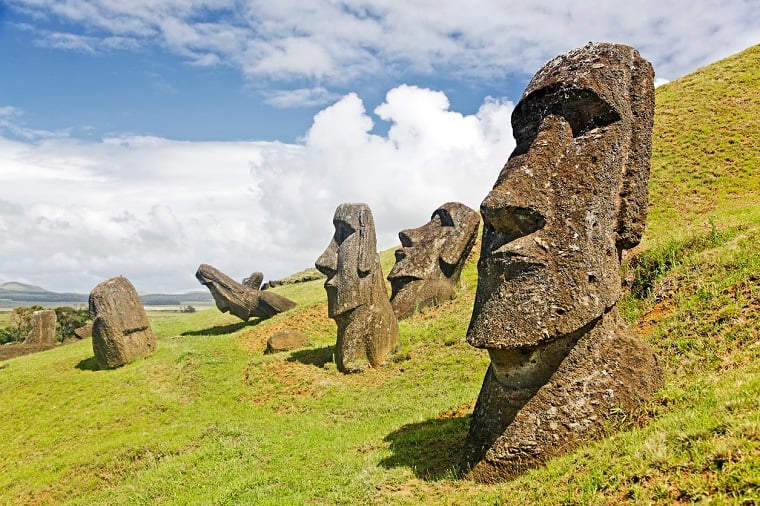 Jo Clough spent three days on Easter Island and relates how this changed her understanding of its history.

Beno bridled when I referred to the scattered stonework at an unrestored platform as statues. “These are our ancestors” he said emphatically. I didn’t make the mistake again!

Easter Island had been on my bucket list for years but its remoteness, some 3,000 miles to the west of Chile, makes it difficult to get to. With a cruise starting in Buenos Aires booked, Easter Island, or Rapa Nui to Easter Islanders, was now in reach, just.

In fact, ‘Rapa Nui’ is the term used by the descendants of the thirteen tribes that settled there a millennium ago when referring to the island, themselves and their language. Although annexed by Chile in 1888, the Rapa Nui are trying to get their name for their homeland included on maps in addition to the currently accepted one. 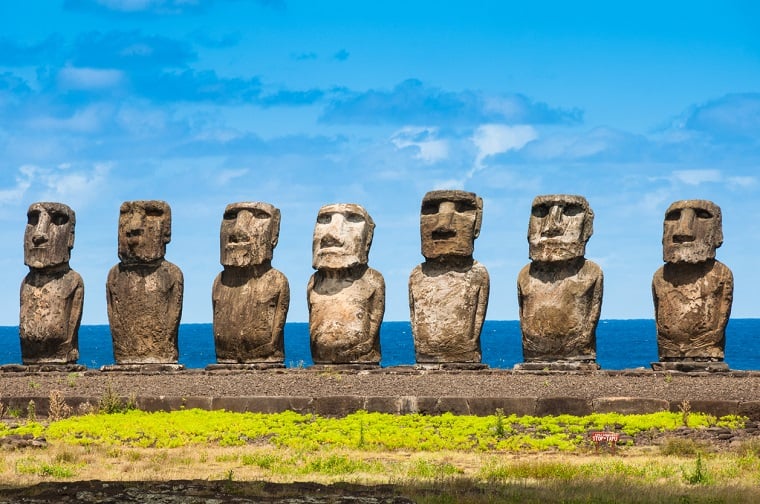 Beno, and our other guide, Teatrohero, were both Rapa Nui but from different tribes. Both were heavily tattooed, a tradition among the men. “If you withstood the pain of the process, (they used bone needles) and then survived the inevitable infection, you were a man” explained Beno. His hair had not been cut since childhood and stretched down his back until he wound it up into a top knot that he pinned in place on the top of his head. Such stone top knots or ‘Pukao’ were present on several of the ancestors that had been restored on platforms.

So many questions kept the conversation flowing. Why the ancestors? As we now take photographs of our families, the Rapa Nui did the same – by carving stones into their likeness before they died. Beno related that those chosen were men who had exhibited power and wisdom (‘mana’) during their lifetime and were not necessarily chiefs. The belief was that having an ancestor watching over the village would enable the people to still benefit from his mana.

But why were some ancestors left in the quarry or by the roadside? Beno continued that these were not ancestors. The title of ancestor was only bestowed when a carving (‘Moai’) was positioned on a platform and had its eye sockets carved. Any Moai that fell by the wayside before this were deemed to have lost their power and of no use. Close inspection of those on the platforms and the rest showed clearly that only the former had carved eye sockets. 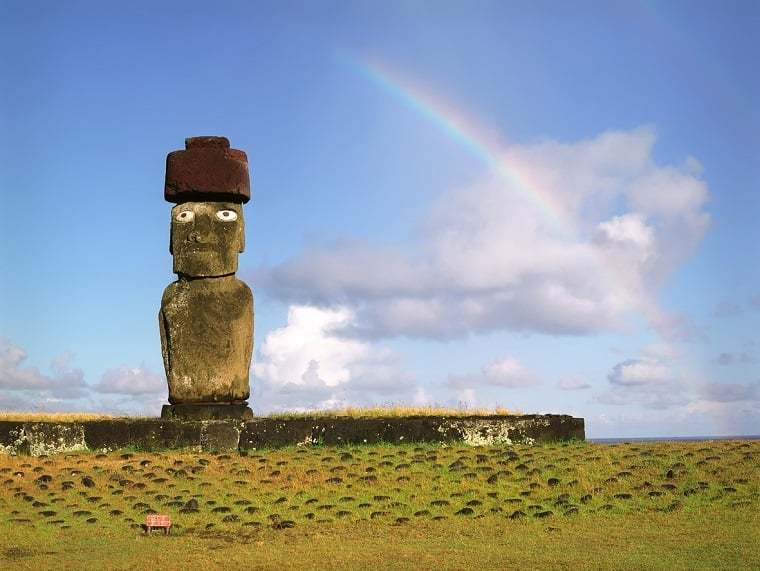 Even today, the Rapa Nui pass on their oral traditions to their children and these do not always concur when relating their history. For example, in the quarry the oral traditions of our two guides differed when I asked who did the carving. One version had it that members of the tribe did the work, whilst the other version recalled the tribe paying a master mason at the quarry.

The absence of trees on the island is the first impression gained as the plane circles for its approach to the runway. The latest theory by an American archaeologist claims that rats had eaten all the tree seeds. Beno snorts. “PhD students from American universities, with a thesis to write, come here and come up with some hypothesis that will secure them their Doctorate and the world thinks that finally the mystery of Easter Island is solved. Well, the island would have to have been overrun with rats for that to have been the case.”

Archaeologists are not all bad, though. During the last 20 years, archaeologists have restored the ancestors onto several platforms where they once stood.

Purely by chance a coral replica eye was found in sand offshore and, although damaged, it was quickly established what it was. Replacements were cut for one of the ancestors to show what they would have looked like when originally put in position.

Beno takes me to the only platform where the ancestors face out to sea, looking towards the Polynesian lands from whence his people had come. This is on Beno’s tribal land and the family home sits discreetly hidden on a nearby stand. He tells me that outsiders say this is the only platform where the ancestors did not face the village but this is not true. In fact, the village used to be located between the platform and the sea. 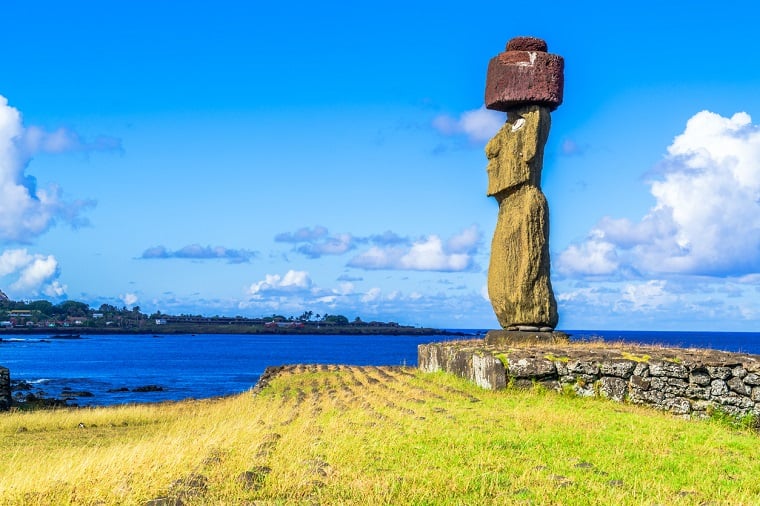 When the ancestors ceased to be revered, the cult of the Bird Man emerged. Representatives from each tribe swam to a small neighbouring island and the winner was the one who returned with the first egg laid by a Sooty Tern, whose species colonised the island. This egg was put on the ‘Pukao’ to keep it safe whilst swimming back and climbing up the cliff. The winning tribe then controlled Rapa Nui resources for a year.

I asked to see the harbour where cruise ships tender to bring passengers ashore. It is a relatively undeveloped site and the entrance is narrow. This explains why, according to Beno, only about 60% of cruise ship passengers actually make landfall. After all, Rapa Nui is in the middle of the Pacific.

Rapa Nui is a fragile environment. Fresh water comes from an aquifer and there is concern that over-extraction could cause the ingress of sea water. All non-biodegradable waste has to be taken to Chile. The Rapa Nui are not keen on the further expansion of tourism but Chile calls the shots.

Before we part, I asked Beno whether all the oral traditions are revealed and he says not. So there is clearly more about the history of Rapa Nui that has yet to be exposed.

I felt so privileged that I had spent such a magical three days with two local guys who were happy to impart their island’s and their ancestors’ history – but recognise that we in the rest of the world will only hear what they wish to tell us.

I met a couple who had just hired a taxi to tour the island. Of what they had seen, they had no understanding.

In conclusion, anyone who has the opportunity to visit this mysterious and mythical island, should seize it with open arms. 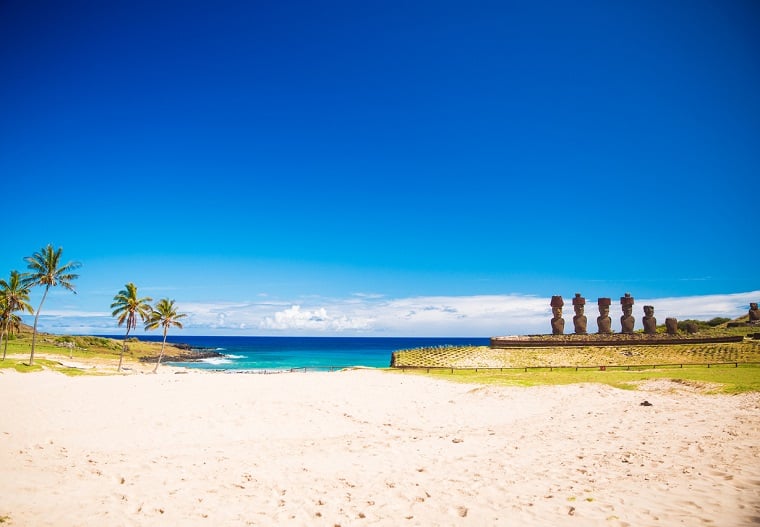