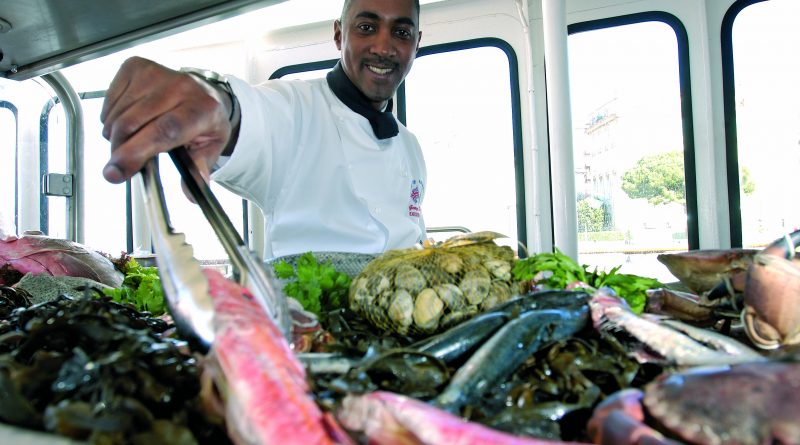 Anyone who’s had the pleasure of a Saga cruise knows that the food knocks your socks off. Seafood buffets out on deck are legendary displays and the post-dinner cheese smorgasbords aren’t worth even attempting to resist; embrace the inevitable food coma that comes with being unable to choose between a cave-aged Cheddar or a Cornish Miss Muffet Truckle and answering ‘both’.

Last year, we caught up with George Streeter, the man behind the mealtime magic in Saga Sapphire’s many kitchens. As the popular Saga cruise ship prepares to leave the fleet, fortunately leaving Executive Chef Streeter behind to continue keeping guests well-fed and counting down the minutes to their next meal, we thought it was the perfect time to share his insights from behind the galley and beyond.

The first time I come across Executive Chef George Streeter is when I run into him at the foot of the deck 9 staircase, catching him mid-conversation as a passenger thanks him profusely for sharing a recipe with her from the previous night’s dinner menu. So highly regarded was the dish in question, she “can’t wait to cook it for the family on Christmas Day”.

George is ever-present on board Saga Sapphire, overseeing deck-top barbecues, dissecting the dinner menu with guests and donning his apron to dish up chicken jalfrezi on the Verandah. Having been the man behind the meals on Saga ships for over 15 years, George knows how to please his patrons. Over the course of our Canaries and Casablanca cruise, countless passengers tell me that the food is the best they have ever eaten at sea; a bold claim, particularly from those cruisers who have spent the equivalent of entire years on the deepest blue. Saga’s culinary creations are undoubtedly a contributing factor in the cruise line’s 99% satisfaction and 80% repeat passenger ratings, with passengers admitting that the food is one of the things which keeps them coming back for more. Given that the average Saga Cruises passenger has enjoyed over 50 years of mealtimes, the fact that they remain so impressed with the food on board Saga Sapphire is true testament to the work of George and his team.

Unlike many cruise lines, whose menus are created months – even years – in advance by head office, Saga Cruises hands full control to its chefs. There is no generic fleet-wide menu, with executive chefs creating their own on a two-week rolling basis, dishing up what they want, when they want. The ship’s dining rooms are run just like a la carte restaurants on land.

“It’s a lot like having your own restaurant, only without the bills to go with it!” says George.

Many years ago, George would order provisions based on what had proven popular on the previous sailing. Nowadays, decades of experience means he instinctively knows what sells, so to speak, though you’ll never pay a penny to dine on Saga ships, with even speciality venue East to West included within your fare.

Much of the provisioning is done at Southampton or Dover at the beginning of each cruise and provenance is key as far as Saga Cruises is concerned. The cruise line employs a ‘chief shopper’, charged with visiting suppliers around the globe to check that strict quality standards are met. Most fruit, vegetables and dairy produce is brought aboard in the UK, as is meat and fish, which for the most part arrives frozen. Every ship has a butchery on board, its butcher following a process which flits between thawing room and cold room as he prepares doorstep-thick Colorado Angus steaks and works his way through the four tons of chicken consumed by guests on an average two-week cruise.

In addition to the supplies brought aboard pre-cruise, there are the little added extras picked up in ports along the way. Every now and again, George hangs up his apron and heads ashore to local markets, selecting regional delicacies that will bring a taste of the destination to guests at dinner. Whether it may be Ibérico ham in Spain, pastéis de nata in Portugal or juicy pink prawns in Norway, George is a man on a mission when it comes to giving his guests a chance to sample the local specialities.

Despite having around 700 passengers and just over 400 crew to feed every day, batch cooking is a dirty term to Saga chefs. If the steak proves more popular than anticipated one evening, chef simply has the butcher cut more, each one cooked to the specific liking of each guest. Your meal is cooked just for you, just as it would be in an à la carte restaurant at home, and you’ll find no ready-plated fare waiting under the kitchen pass.

Everything is cooked fresh on a Saga Cruises ship, George tells us as we delve deep into Saga Sapphire’s galley for a behind-the-scenes tour. Running the galley is a military operation but the executive chef’s 70-strong team knows the ropes. Hors d‘oeuvres are pinched into shape and filled with caviar, crepes are rolled paper thin and dark chocolate spread on stainless steel counters is crafted into spiralling shards with little more than the pull of a palette knife. Soups, sauces and even the stocks which go into them are freshly-made each day, as are the flaky pain-au-chocolats served warm from the oven each morning in the Pole to Pole restaurant. In the ‘calorie area’ as George has deemed it, three bakers work on rotation day and night, rustling up the various bakes and cakes that lead us all down the slippery slope into the next size up. Turning down the bread basket is one thing, but an already difficult test of willpower becomes nigh on impossible when you know that the bread barely had time to cool before reaching your side plate.

Of course, commanding a kitchen at sea isn’t all plain sailing, with upwards of 80 special dietary requests on an average two-week cruise. Some request vegetarian dishes, whilst others have more complex needs like lactose and gluten intolerances and coeliac disease. Addressing special dietary requirements and allergies isn’t easy in such a small space but George and his team are well-versed in ensuring that such needs are not only met but exceeded. Every lunch and dinner menu offers vegetarian options and a sugar-free dessert, whilst the sugar-free and gluten-free treats are as tempting as those on the main afternoon tea spread in the Britannia Lounge.

Despite delivering something for all dietary requirements and vast deck-top barbecues capable of defeating even the biggest appetite, there is surprisingly little food waste generated aboard Saga Sapphire. Any leftovers are served to the officers and crew the following day, and if you think this must mean a diet of dry, day-old lasagne and shoe-leather steaks, think again; for the most part, meals are cooked fresh with the quality ingredients remaining from the previous passenger breakfast, lunch or dinner sitting.

And when it comes to the washing up? Well, there is no rolling up of sleeves or stainless steel sinks full of Fairy Liquid on Saga Sapphire. Instead, there is a dishwasher costing the equivalent of a brand new Aston Martin (£120,000 to be precise), which is so large that it required a hole to be cut into the side of the ship when it was installed in 2016. Cleaning up after 1,000 people three times a day, give or take an afternoon tea here and there, makes for quite the pile of dirty dishes, but this ultra-economical dishwasher does the job in minutes.

We’re sad to see Saga Sapphire go but with two new ships taking her place, Spirit of Discovery and Spirit of Adventure, and news that Covid-19 cover is included in their standard insurance on all bookings, the future is bright for Saga and George Streeter!