The Caribbean is the most popular cruise region in the whole world, and it’s easy to see why! There are more than 700 separate islands dotted throughout the clear blue Caribbean Sea, and that’s not including all the amazing ports of the USA, Central America, and South America that lie on the beautiful Caribbean coast. Perhaps the most impressive aspect of Caribbean cruising is that you can visit the region year after year and never see the same destination twice! There are so many wonderful places to explore that there are many different Caribbean cruise itineraries, ranging from the Eastern Caribbean, with colonial destinations such as the British Virgin Islands and Antigua, to the Western Caribbean islands of Cozumel and Grand Cayman which boast a unique blend of Caribbean and Mexican Riviera influences.

If you’re considering your first ever cruise to the Caribbean, it can be difficult to choose which islands you want to visit. To make your decision easier (or more difficult!), here’s part 1 of our list of 10 islands we think every traveller with an appreciation of stunning nature, a love of fine cuisine, and a real sense of adventure should visit:

If you’re a beach lover, then you absolutely must visit Grand Cayman Island. Home to the world famous Seven Mile Beach, which really does boast seven whole miles of the most amazing white sands you’ll ever see in your life, you could easily spend days enjoying all the wonderful views and activities these beautiful sands have to offer, such as parasailing, sunbathing, and snorkelling just off the coast. Although smaller, Cemetery Beach is also worth a visit if you’re keen to explore some of the most picturesque areas of Grand Cayman.

Grand Cayman Island is also particularly popular with nature lovers, as the island, and the surrounding waters, are somewhat of a safe haven for exotic and rare wildlife. The Grand Cayman Turtle Farm is truly unbelievable. Visitors to this wildlife habitat can learn about the Green Sea Turtle in a hands-on environment, where holding the animals is not only allowed but actively encouraged! Visit during breeding season – May to October – and you can see turtles ranging in size from tiny babies right through to over 500 lbs! You can also book an excursion to Stingray City through your cruise line – a sandbar just off the coast where shallow waters attract friendly stingrays that are only too happy to be fussed over! 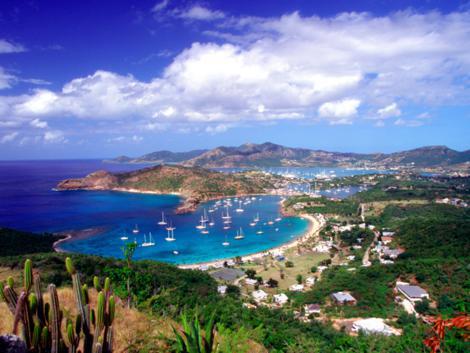 For us Brits, Antigua really is a home away from home. As one of many British colonial islands in the Caribbean, there are very definitive English influences across Antigua, perhaps more so than anywhere else in the region as the island only became independent from the UK as recently as the 1980s. With cricket as the national sport (and one that’s taken VERY seriously!), and local towns and villages with names such as Falmouth and English Harbour, it’s hard to forget the island’s origins, making for a very rich cultural experience.

If you like good food – especially seafood – you can’t go wrong with a trip to Antigua. The waters around the island, and nearby Barbuda, are known for their lobster population, but this isn’t just any lobster, this is Caribbean Spiny Lobster. The Caribbean Spiny Lobster doesn’t have pinchers like other similar species, instead boasting a collection of sensitive antennae and spines which act as a defence mechanism. The meat at the base of the antennae is much sweeter and tastier, and Caribbean Spiny Lobster is exported all over the world due to their unique taste. Many cruise lines offer lobster dinners and buffets as part of their Antigua excursion programme.

Barbados is a place of contrasts, and this can easily be seen when looking at the most popular activities and attractions on the island. As the easternmost of the Caribbean islands, many families visit Barbados as it’s easily accessible when taking a transatlantic cruise from the UK (no one wants to do a long-haul flight with a baby!). There are lots of activities that appeal to young families, especially those with adventurous teens. For those who love exploration, a dive at Carlisle Bay, which is home to 6 shipwrecks, is a must. If your kids aren’t used to diving, don’t worry – the WW1 tug boat Berwyn sits at just 20 feet below sea level, making for an easy swim.

For those travelling without kids, however, Barbados is a bit of a relaxation and festive paradise! Home to the world famous Mount Gay rum, travellers can visit the distillery, taking a tour of the facilities and even sampling some of the potent liquor. There are three tours available – the standard tour, which demonstrates how the rum is made, the cocktail tour, which includes free samples of rum-based cocktails in the Mount Gay Rum Bar & Lounge, and the buffet tour, which include a rum-inspired lunch. Does it get much better than that?  Alternatively, just lay back, relax and soak up the incredible sunshine at one of the many luxurious beach scenes.

Love adrenaline-fuelled adventures which are rewarded by spectacular views? Then get yourself to St Lucia! Different to many of the Caribbean islands with its mountainous and rugged terrain, St Lucia is less of a place to chill out and relax, and more of a place to don your hiking boots and get up into the mammoth rainforests. As you approach Saint Lucia, you’ll instantly see the pitons – Gros Piton and Petit Piton – which are iconic symbols of the island. Some of the best views in the Caribbean can be obtained from the summit of Gros Piton, but be prepared! Standing at almost 800 metres tall, its hard work getting to the top (fortunately the temperature does drop a little the higher you get), but the views are unrivalled. With Mount Gimie standing tall in the background, and the Maria Islands looking like tiny ants, you won’t be sorry!

If challenging hikes aren’t your thing, don’t worry – there is still plenty to do in St Lucia that doesn’t involve tiring treks through the rainforest. If you appreciate stunning scenery, then the Diamond Falls Botanical Gardens won’t disappoint. All manner of exotic and colourful plants, trees, and flowers are grown here, including the beautiful, red hibiscus flower. This place is popular even during the winter, as Saint Lucia’s climate ensures the plants are at their best all year round.

Of course you may prefer to simply kick back and unwind.  Whilst St Lucia does offer a great choice of adventure excursions, the island is also remarkably beautiful and the lush scenery provides the perfect backdrop for afternoon siestas and complete beach relaxation.  St Lucia has it all!

Curacao is by far one of the most fascinating places in the Caribbean. Along with being very scenic and beautiful, the rich and diverse culture here is truly amazing. Curacao is one of the few islands which effortlessly blends three cultures of stark contrast – Arawak, European, and Caribbean. The Arawak were the very first inhabitants of Curacao, and the island is very proud of its indigenous people. Head to the Kura Hulanda Museum and you can find out all about the origins of Curacao, including having the chance to see some replicas of the glittering jewellery and gems the Arawak would cover themselves in.

Following the decline of the Arawak and the beginning of colonialism in the Caribbean, Curacao became a Dutch overseas territory, and although the island became independent of Europe in 2010, many Dutch influences can still be seen. Cafes and restaurants still serve up Dutch-inspired cuisine. However, since becoming an independent nation, more and more Caribbean influences can be seen. Papiamentu, rather than Dutch, is the official language, and creole flavours are beginning to capture the restaurant scene. If you love experiencing ‘real’ destinations, bursting with history, there is no better place than Curacao.

Why stop now? Check out part 2 of our list of the 10 must see Caribbean islands coming soon and see where you could be heading off to!

You can also read more about the beautiful Caribbean cruise destinations available including each port of call – just click here.