The Mediterranean has always just slightly lagged behind the Caribbean in terms of cruise popularity, but is all that about the change? The Med is currently one of the hottest cruise destinations, in terms of weather AND demand, in the world, and with some of the most luxurious and eagerly anticipated ships due to hit the waters in the near future, it’s gaining more adoration and fame than ever before.

P&O’s newest addition, Britannia, is due to sail from Southampton to beautiful destinations in Spain, Italy, Greece, and France from spring 2015, while the largest cruise liner in the world, Royal Caribbean’s Allure of the Seas, will be coming to the Med for the first time in May 2015, offering fly cruises from Barcelona and Rome. Royal Caribbean’s latest addition, Anthem of the Seas will also sail Mediterranean waters in 2015 for a range of roundtrip Southampton sailings.  For travellers who love Mediterranean cruises, things have never been more exciting, so now is a perfect time to take a look at some of the most picturesque destinations in the Med.

Here’s part 1, featuring Madeira and Calvi, and the most stunning destinations in between:

Madeira is known by many different nicknames, but there is perhaps none so fitting as ‘Garden Island’. This small island, which measures just 309 square miles, boasts more than 10 beautifully maintained gardens, along with a myriad of wild fields, home to more than 100 striking and exotic native species. It’s impossible to walk far in Madeira without finding yet another colourful patch that you simply must take a photo of! However, while Madeira was the proud recipient of the prestigious European Flowering City 2000 award, there are plenty of other scenic offerings across the island.

Madeira, along with the other nearby Atlantic islands such as the Azores, was created from volcanic activity long before the first settlers appeared in the 15th century, so there is a very unique and unusual landscape here that’s quite fascinating. On Madeira’s north coast, travellers can walk through almost half a mile of lava tubes, estimated to be around 400,000 years old. There is a real diversity in Madeira in terms of scenery, with the attractive, typically Mediterranean environment to the south, and the harsh, rugged terrain to the north. A good way to see a bit of everything is to take a walk alongside the levadas, which travel all around the island. While you won’t have time to see it all, you will be rewarded with real diversity on your hike.

Cruise passengers visiting here will love the close proximity of the port to Funchal’s centre.  The market town is within easy walking distance from the cruise port but the further inland you venture, the steeper the landscape becomes and the narrower the streets are, this is important to consider when planning your day.  The botanical gardens are certainly wonderful to see but one of the most popular excursions here, especially for British passengers, is a visit to Reids Hotel for a traditional afternoon tea.  The hotel offers an elegant quintessential British experience whilst you soak up some of the best views on the island.

Lisbon is a very special destination indeed, and certainly one of the most beautiful in the Med. Not only does this Portuguese city overlook the vast expanse of the Atlantic Ocean, it’s also situated on the banks of the pretty Tagus River, which separates Lisbon and is a focal point of any visit to this part of the world. If you have just a short amount of time in the city – a half day for example – and are keen to explore the true beauty of Lisbon, you must make a visit to the Alfama district, which was home to some of the city’s oldest settlers and retains a very historic look and feel. The tiny, narrow streets which meander to create a somewhat maze are stunning, and make for amazing photographs.

If, however, your ship is stopping for longer in Lisbon – a full day, or even overnight – it’s well worth checking out some of the city’s best viewpoints to really get a good understanding of how picturesque this destination is. There are two places that come to mind for the best views in Lisbon. First is the observation deck at the Christ the King statue, located just across the Tagus. At 82 metres high, there is arguably no better place to gaze out over the beautiful city. The second option is the Armazéns do Chiado shopping centre. While this may not be the most obvious viewpoint, the top floors offer a spectacular panorama that’s breathtaking.

Although Lisbon is considered a small city compared to many other European capitals, it does span quite a distance and therefore for passengers with limited time, its better to focus on three districts; Baixa, Bairro Alto and Alfama, each boasting their own unique features and attractions.

If you’re partial to white, sandy beaches – and lots of them – then the island of Majorca, just off the Spanish mainland, is the perfect picturesque destination. Just a short distance outside the city centre you’ll find Portixol Beach – one of the most popular, and most beautiful, in Palma. With soft sands and calm waters which are protected by the curvature of the bay, this is a wonderful destination for families especially, and there are plenty of opportunities for swimming, exhilarating watersports, or simply chilling out. 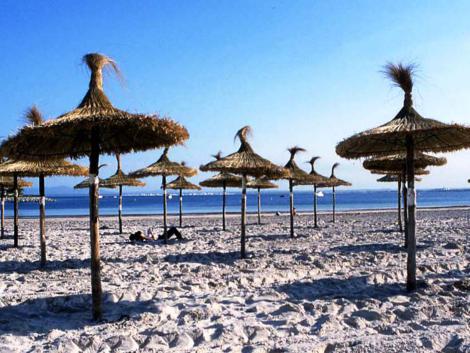 Back on dry land, the city of Palma is very historic, and a true pleasure to walk around. Having originated in Roman times, but also having been heavily influenced by Spain and Northern Africa, there’s a rich and diverse culture and history here which is evident in the layout of the city, and in its architecture. The historic district is very rustic and raw – unaffected by modern developments. To make the most of limited space, buildings were built up, rather than out, which casts a somewhat eerie shadow over the narrow, cobbled streets, adding to the beauty of the area.

There’s a reason why St. Tropez is a favourite of the rich and famous – it’s absolutely gorgeous! Bursting with picturesque harbours which line this popular part of the French Riviera, filled with luxury yachts and beautiful people, it’s difficult to find anywhere as scenic in the world. Beaches are plentiful here, ranging from nudist beaches right through to family-friendly sands complete with play areas and child-friendly restaurants. Make sure you know which beach you’re heading to, or you could be in for a surprise, and one that isn’t quite so picturesque!

Simply taking a walk around St Tropez is a wonderful activity for those looking for quintessential Mediterranean views. This destination has, of course evolved to meet the needs of its most esteemed guests, yet it still retains many humble aspects of its past as a small fishing village. Homes in St Tropez vary from tiny, almost shack-like properties, to palaces and castles of gargantuan proportions. Château de la Messardière, for example, is even set within its own private vineyards! It doesn’t get much more striking than that! 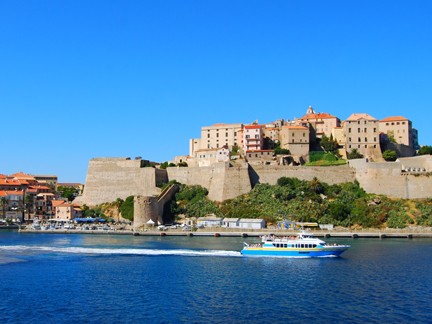 Calvi, on Corsica’s north coast, is very intimate, and yet remarkably picturesque. The views primarily come in the form of the citadel. As you approach Corsica, it’s well worth making sure you’re out on deck as you sail close and closer to the gigantic walled structure which looms over the tiny buildings and long stretches of sand below. Some of the best photographs of Calvi can be taken from your ship, but do make sure you disembark and explore the area fully, too.

From the great vantage point of the citadel, travellers will be rewarded for their trek along the uneven, cobbled pathways with an unrivalled view across Calvi, and even across most of Corsica. The mountainous central region of the island creates a magnificent backdrop, especially the island’s highest peak, Monte Cinto, which stands tall in the background. If your tender back to the ship isn’t until late, stick around until dusk, when everything instantly becomes even more magical – you won’t be sorry!

Hungry for more? Check out part 2 of our list of the most picturesque Mediterranean cruise destinations. Travelling from Portofino right through to Istanbul which blends the east with the west, we’ll take you on a colourful journey full of stunning beaches, historic towns, fascinating cultures and even the odd tulip garden!