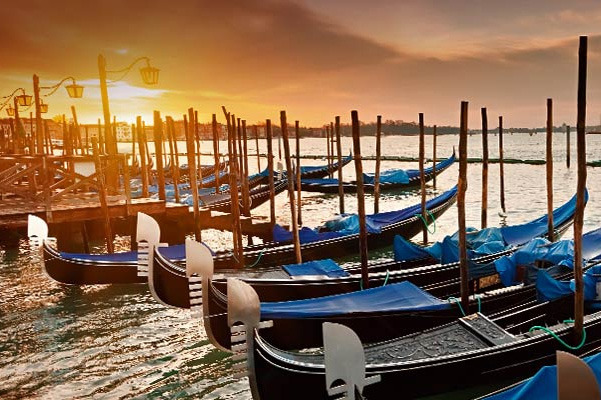 If you loved part 1 of our list of the most picturesque Mediterranean cruise destinations, then this will be right up your street. Without any further ado, let’s get stuck in to part 2 of the list, covering beautiful cruise ports in the central and eastern Med.

You can read more about all the destinations featured in this article – just click here.

It could be argued that Portofino is Italy’s answer to St Tropez – it’s a hotspot for the rich and famous who sail their luxury yachts into the harbour to enjoy the quiet and serene beauty of the Italian Riviera. It’s actually the harbour itself that’s one of the most beautiful locations. Unlike some harbours which can be quite industrial, the harbour in Portofino is simply stunning. With clear blue waters, white sands, lush green foliage in the background and colourful houses that jut out from the cliff faces, the village is incredibly photogenic.

If you’re keen to venture away from the harbour, a visit to Castello Brown is well worth the effort. As a former defence fort, Castello Brown is situated high up above the harbour, commanding amazing views across the Italian Riviera, and across Northern Italy and Southern France. If you’re lucky enough to be in Portofino as the sun begins to set, being up in this prime position allows for spectacular views of the village lights which illuminate the harbour below.

As a city comprising primarily of canals and pretty bridges, it’s hard to find anywhere in Venice that isn’t scenic. Simply walking around the city centre is enough to make travellers realise just how beautiful Venice is, although if you’re looking for some amazing photo spots, the Rialto Bridge and the Bridge of Sighs are two of the most stunning, and most well-known, of sights to behold. It’s also worth while taking a leisurely stroll along the Zattere – a promenade that follows the Giudecca Canal. Here you’ll find plenty of little al fresco cafes, viewing benches, and traditional street lamps which make for wonderful pictures.

While the canals are spectacular, the architecture of Venice is equally as breath-taking, with rows and rows of colourful, classic Mediterranean-style houses separated by narrow waterways. Be sure to take in the Bell Tower of St Mark, a must when visiting Venice. This wonderful location also provides great views of the city and the Venetian Lagoon.

Having been founded somewhere around the 7th century, this popular Croatian port has maintained its historic roots, creating a very picturesque coastal city that has become one of the most beloved holiday spots on the Dalmatian coast. What makes Dubrovnik so picturesque is its architecture, with a wonderful blend of gothic and Roman baroque designs which add to the grand atmosphere of the city.

For the best views of Dubrovnik, take a walk around the ancient city walls. Once used to protect the city, the walls are today one of the most popular tourist attractions, offering beautiful views of the city, the Adriatic Sea, and the east coast of Italy. You can even glance down upon one Dubrovnik’s two sandy beaches – Lapad Beach and Banje Beach. Lapad Beach is a little rocky in places, but, nestled between the Lapad Peninsula and Dubrovnik proper, the views are fantastic.

When visiting Santorini in Greece, it doesn’t matter which town or village you travel to, you’re sure to see something special. Santorini is perhaps most famous for the town of Oia, which is filled with the classic white-washed houses typical of the Greek islands, stacked high, one on top of the other, as they scale the cliff faces. Oia is home to many palatial properties and luxury resorts, so you’ll find everything from the most basic of homes to absolutely extravagant properties complete with rooftop pools overlooking the Mediterranean Sea.

Despite some areas of Santorini being stereotypically beautiful – a little piece of paradise – other areas are much more raw and rugged. The island was born from volcanic activity, and Santorini Volcano is still active. Eruptions, however, are few and far between (roughly every 10,000 to 30,000 years!), so it’s perfectly safe to visit the volcanic site and marvel at the natural beauty. The Santorini Caldera – just off the western coast in the Aegean Sea, is also remarkably beautiful and serene. You can get great views of the Caldera, and the volcano, from Megalochori.

Last but by no means least, a list of the most picturesque Mediterranean cruise destinations would not be complete without Istanbul. As the only city in the world which straddles two continents – Europe and Asia – there is such diversity here that it’s hard not to instantly fall in love with this beautiful and magical place. On the European side, one of the prettiest places you can visit is Gülhane Park which offers a fresh, airy outdoor space amongst the hustle and bustle of the city. With narrow pathways lined with trees, and views of Topkap? Palace, there’s nowhere more picturesque.

On the Asian side of Istanbul, while the landscape isn’t particularly different, there are some very telltale scenic aspects which give a slight hint as to the continental divide. Houses overlooking the Bosphorus have a definite oriental quality to them,

almost more in keeping with the classic Japanese style than traditional European designs. Travellers will also find stall after stall selling all manner of Asian spices, which not only makes the streets smell delicious, but also creates wonderful photo opportunities, with the bright colours of the spices adding to the charm of this culturally diverse city.

This incredible city is over 3,000 years old and a magical crucible of cultures.  Cruise lines often opt for overnight stays when visiting Istanbul to give passengers enough time to take in all the city has to offer.  A tour of the main sightseeing spectacles is usually a great place to start, especially if it is your first visit.  The world renowned Blue Mosque is truly sensational as is the equally impressive mosque of Suleyman the Magnificent.  Istanbul is also a shopping enthusiasts paradise.  The Grand Bazaar – a maze of narrow lanes to meander – boasts more than 4,000 different shops, stalls and unique workshops to explore.  It’s also worth visiting the ancient Hippodrome, which is now an open air museum.  From incredible architecture to the city’s captivating skyline, Istanbul had to make the list.

While we’ve deemed these Mediterranean cruise ports to be some of the most picturesque in the region, they’re certainly not the only scenic places you’ll visit when taking a Mediterranean cruise. With great weather, crystal blue waters, and a blend of sandy shores and rugged, mountainous terrain, there is beauty across the Med, wherever you look….where will you go?