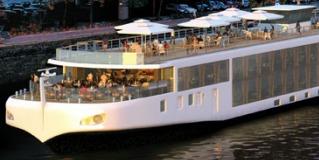 Welcome to the future of river cruising!!

Viking River Cruises have smashed the world record by inaugurating the most ships in a single day.  The massive launch from the world renowned river cruise line has sent a signal around the world that they are taking river cruising to the next level with an amazing range of longboat developments.

River cruising has made a prominent rise to fame in recent times and has now become one of the hottest segments in travel.  It is therefore fitting that at this time the renowned river cruise line has taken the steps to unveil their brand new range of long boat designs set to take the river cruising world by storm.

The illustrious cruise line set a brand new record by christening 10 brand new Viking Longships in a single day.  This is the first ever simultaneous christening ceremony to be held and took place in Amsterdam debuting the Viking Aegir, Viking Atla, Viking Bragi, Viking Embla, Viking Forseti, Viking Jarl, Viking Rinda, Viking Skadi, Viking Tor and Viking Var.  The record was certified by a GUINNESS WORLD RECORDS adjudicator and represents a proud achievement.  Not only was the event a special day in itself but the cruise line made it even better with the inclusion of ten distinguished female guests from around the world to represent the Viking brand pillars of history, art, education, exploration and discovery.  These women served as ceremonial godmothers for the new ships.

“Today is a proud day for Viking and for river cruising. We are honored to showcase 10 of our revolutionary new Longships and to have had such a celebrated group of women helping us christen them,” said Torstein Hagen, Chairman of Viking Cruises. “Our guests are explorers, just like the ancient Vikings of our Norse heritage, which is why we deliver authentic and enriching travel experiences like no other cruise line.”

Each godmother gave a speech in celebration of the new vessels and the exciting growth of river cruising.  The official recognition of the record breaking achievement was also presented to the cruise line in front of a crowd of approximately 700 guests.  Four of the ships christenings took place in front of the crowd in Amsterdam whilst the other six vessels were conducted live via satellite.  This live broadcast took place from Neptun shipyard in Germany.

Let’s take a look at the Godmothers that helped mark this special occasion:

Lady Fiona Carnarvon, Godmother of Viking Skadi, ran her own fashion label, Azur, and now successfully manages affairs at the Castle, including many special events such as the Egyptian Exhibition. Lady Carnarvon recently authored the New York Times Bestseller “Lady Almina and the Real Downton Abbey: The Lost Legacy of Highclere.

Agapi Stassinopoulos, Godmother of Viking Rinda, was born and raised in Athens, Greece. While collaborating with her sister, Arianna Huffington, on research for her book about the Greek gods, Stassinopoulos’ love for the gods and goddesses was ignited and led to two books of her own – “Conversations with the Goddesses” and “Gods and Goddesses in Love”

Alexandra Lobkowicz, Godmother of Viking Forseti, is the chairman of the nonprofit that oversees the preservation of the vast Lobkowicz collections including thousands of works of art, a significant library and family archive spanning eight centuries.

Zhang Ling, Godmother of Viking Embla, is a dedicated educator at Cen He elementary school in the city of Jinzhou, Hubei Province, China – a school sponsored by Viking River Cruises.

Marit Barstad, Godmother of Viking Tor, is the sister of Viking’s chairman Torstein Hagen. Marit started her working life as a personal assistant to the chairman of Øivind Lorentzen AS, a company that in the late 1960’s built two of the ships that subsequently became Princess Cruises.

Dertje Meijer, Godmother of Viking Bragi, is President and CEO of the Port of Amsterdam, which is the fourth largest port in Europe, hosting more than 100 sea cruise ships and 1,300 river cruises ships, and handling more than 75 million tons of cargo every year.

Geraldine Norman, Godmother of Viking Var, is founder of the Times-Sotheby index of art prices and best-known for her discovery of the art forger Tom Keating. An expert in the history of The Hermitage Museum in St. Petersburg, Russia, Norman also authored “The Hermitage: The Biography of a Great Museum.”

Sabine Rhabek, Godmother of Viking Jarl, is a founding member of the emergency room team at the General Hospital (AKH) in Vienna and a former nurse at the United Nations Mission Hospital in Iran, where she provided medical care to thousands of Kurdish refugees during the first Gulf War.

Eszter Völner, Godmother of Viking Aegir, is a Budapest native, and lives on the Danube’s shore. Daughter of Dr. Pál Völner, secretary of the Hungarian State Ministry of National Development.

An incredible line up of special guests, each of these women came together to mark a special day for Viking River Cruises and celebrate the ceremonies.  Let’s now take a closer look at the design that made this day possible; the new Viking Longship.

Named Best New River Ships of 2012 in Cruise Critic’s® Editors’ Picks Awards, the Longship class boasts a cutting edge, innovative design with outstanding environmental technology and superb facilities for passengers.  The comforting amenities are absolutely spectacular and certainly take river cruising into a new age.  The brand new features include a wonderful Aquavit Terrace with an all new indoor/outdoor design to provide comfort for guests no matter the weather.  Passengers will also love the floor to ceiling windows here for a fully panoramic experience and the chance to dine al fresco as you sail the sights of some of the world’s most enchanting destinations.

The new ship design is able to accommodate 190 passengers with a total of 95 staterooms.  The accommodation on board is sublime with a great range of cabin choices including two spectacular Explorer Suites, which are now famous for being the largest river cruise suites in Europe.  These suites come complete with 270 degree views for an opportunity to sight see on board like never before.  Other stateroom categories include two room veranda suites, single room veranda staterooms and 22 French balcony staterooms.

The environmental focus of the new Longships is utterly exceptional.  The new vessel design features on board solar panel as well as an organic herb garden.  Not only this but the new ships even boast energy efficient hybrid engines that even provide a greater experience for the passengers by reducing vibrations and creating a smoother cruising experience.

The new Longships have been built at the Neptun Yard in Germany, part of the Meyer Neptun Group.  As if this remarkable occasion wasn’t enough, the cruise line actually plans to break its own record in 2014 by unveiling the launch of 12 new Longship designs that will sail the magical sights of Europe.

Viking River Cruises continue to lead river cruising into a new era and we have to say we cannot wait to see what they come up with next.  The new ships are amazing with astonishing features for entertainment and dining on board.