Saint Lucia is a favourite of many cruise passengers who return to the island year after year. Unlike some of the other islands which have a very strong beach atmosphere, Saint Lucia appeals to both those who love to relax on beautiful beaches, and to those who prefer more active pursuits. Saint Lucia’s volcanic origins means the island has a very rugged, mountainous terrain which is perfect for hikers, while the western Caribbean coast is ideal for snorkelling in the crystal clear waters. Saint Lucia is a part of the Windward Islands group, along with Dominica, Martinique, Grenada, and St Vincent & the Grenadines. 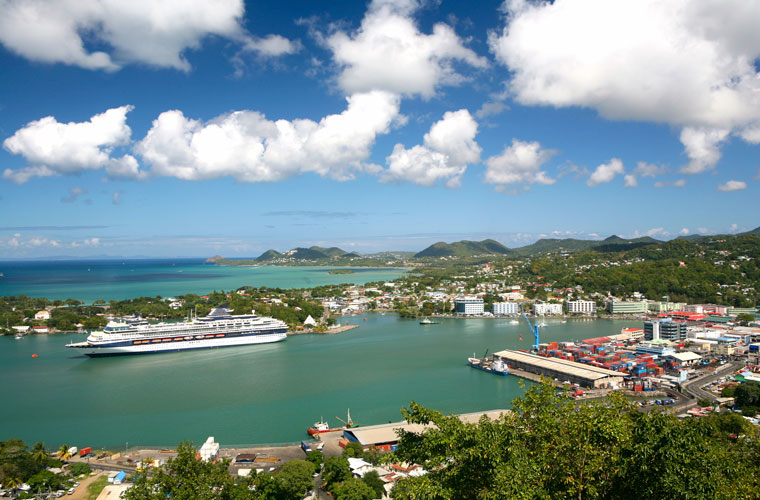 There are two cruise ports in Saint Lucia, both located very near to each other. The most northern port is located in Pointe Seraphine and mainly used by Royal Caribbean, Norwegian Cruise Line, and Celebrity Cruises.

The second port is La Place Carenage, which is mainly used by Princess Cruises and P&O Cruises. This port is bigger, and incorporates a gigantic three-storey shopping centre selling small trinkets, linens, and tanzanite jewellery. Make sure to take a note of which port you arrive into. However, if you do end up at the wrong port after a long day, don’t panic! There’s a handy water taxi between the two.

Whichever port you arrive into, you’ll be very close to the island’s capital, Castries. Pointe Seraphine is just a 20 minute walk from the heart of the city, while La Place Carenage is just 5 minutes on foot. Castries City is where you’ll find the main Government centre of the island, bars, restaurants and luxury resorts, not forgetting some amazing French colonial architecture.

Saint Lucia’s economy depends primarily upon two aspects; firstly, tourism, and secondly the banana industry. Saint Lucia is one of the world’s most prominent suppliers of bananas, so it comes as no surprise that the island’s national dish is ‘green fig and salt fish’ – green figs being unripe bananas. The salt fish (usually cod) and peeled bananas are gently boiled until just cooked, and then sautéed with a mix of tomatoes, peppers, garlic, and a good helping of hot sauce. 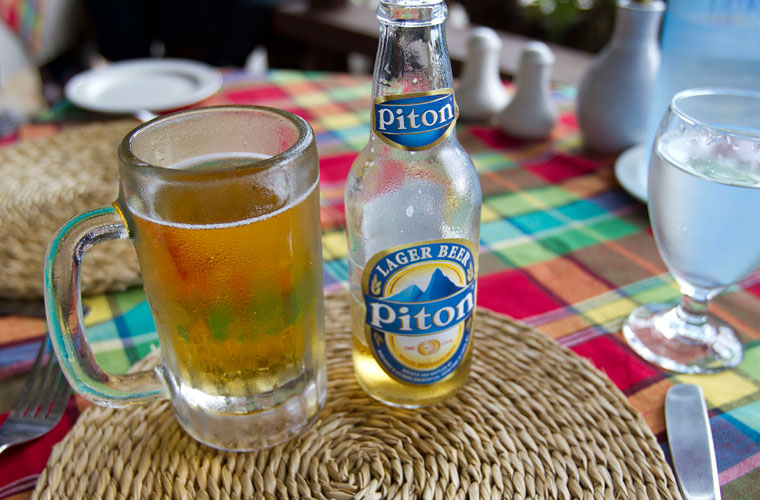 This dish is often washed down with an ice cold Piton beer – a Heineken beer brewed on the island and named after the Pitons. It’s considered to be a beer for those who don’t really like beer. There’s very little, if any, malt taste, and instead incorporates mild hints of lemon and honey, and just a touch of spice. 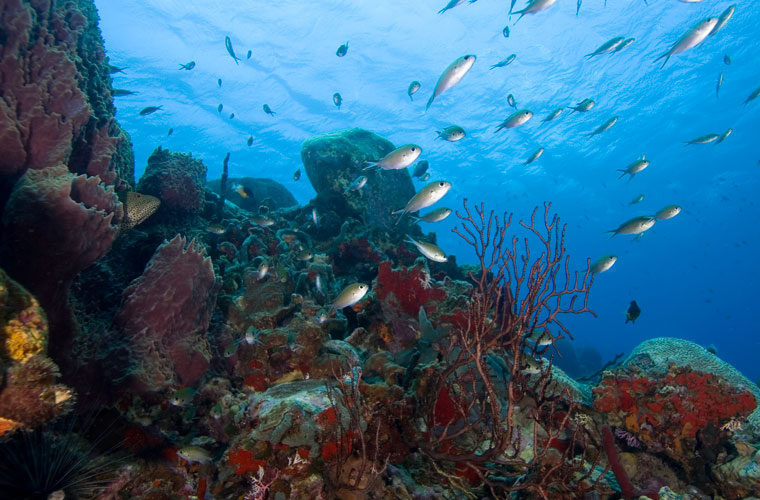 Whether you’re visiting Saint Lucia for a day, or popping over to the island for a little longer following a Caribbean cruise, you’ll never be bored here. Here are three of the must-do activities on the island, which can either be arranged privately, or through your cruise ship’s excursion desk:

The Pitons – the Gros Piton and the Petit Piton – are Saint Lucia’s most famous and breathtaking landmarks. A true symbol of the island, the two mountainous peaks are more than 700 metres tall, and emerge from the waters acting as a gateway to Saint Lucia’s mainland beauty. Many travellers argue that the best way to see the Pitons is to take a catamaran cruise from Soufriere Bay, sailing right up to the base of the Pitons for a unique and awe inspiring view. The vessel allows travellers to get so close that many of the peaks’ 27 bird species and 148 plant species can be viewed right from the boat if you keep your eyes peeled. 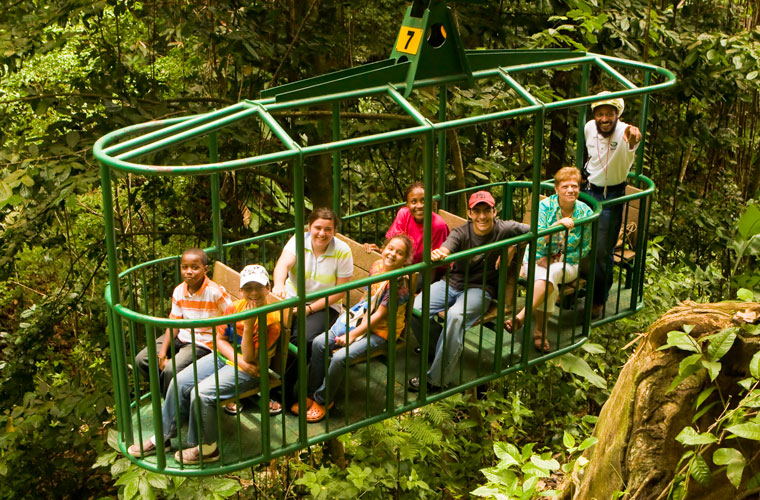 To experience Saint Lucia’s fascinating and majestic wildlife, take a trip up to the island’s northern coast to Gros Islet, where travellers can take an aerial tram tour of the northern rainforest area. You’ll be amazed as the gigantic ferns almost tickle the base of your gondola, and with an open air design you can hear the whizzing of the hummingbirds as they dart past at record speeds. At a height of 2000 feet above sea level you’ll have a truly amazing birdseye view of the island in all its glory, showing exactly why Saint Lucia is often considered to be one of the world’s most beautiful destinations. 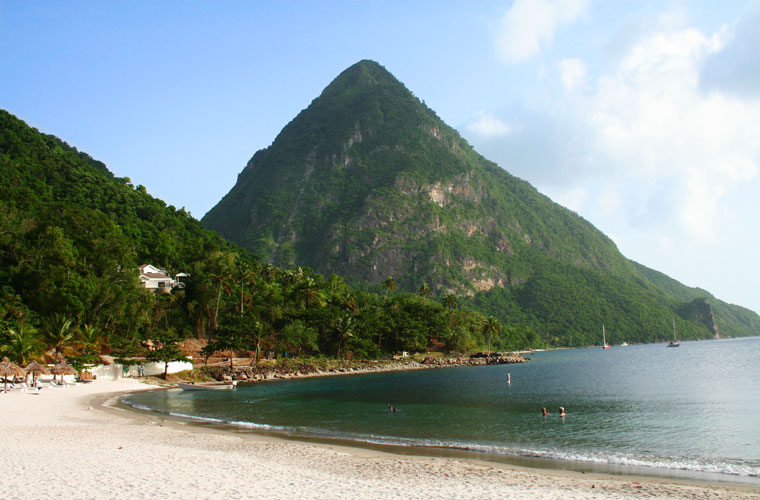 There are many gorgeous beaches in Saint Lucia, but if you’re looking for a stretch of sand close to the ports in Castries, Anse Cochon, Anse Chastanet, and Anse des Pitons are the best choices. Cochon and Chastanet beaches are maybe not quite what you imagine when you think of the Caribbean, but they are typical to Saint Lucia. They boast darker sands resulting from the island’s landscape, and are popular for watersports such as snorkelling and scuba diving. Anse des Pitons, on the other hand, is the stereotypical white Caribbean beach, with sands imported from Guyana. This is the place to relax, sunbathe, and take photos to make your friends and family back home jealous! 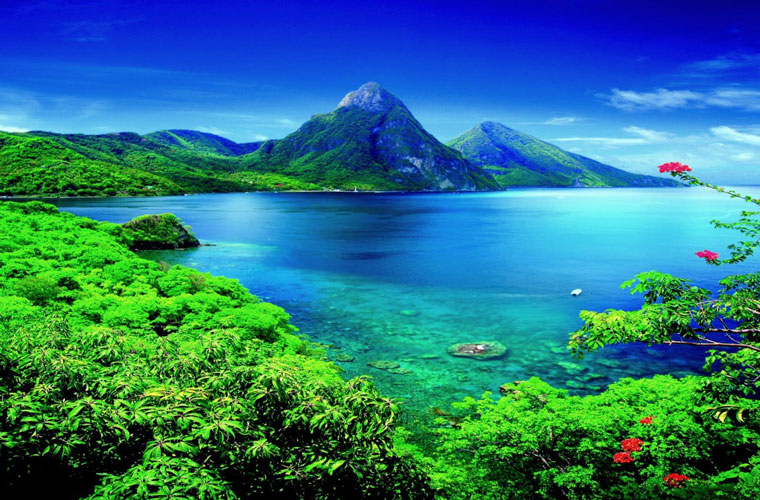 St Lucia experiences a tropical climate, which means dry, warm winters and hot, humid summers. However, both summer and winter both have plenty to offer, so travellers may wish to figure out what sort of activities they want to enjoy on the island, and travel at a time that allows for these activities to be carried out in pleasant conditions.

Winter is the busiest time of year in Saint Lucia, with the main cruise season running between October and April. The cruise season corresponds to the dry season, when rainfall is minimal, and temperatures are ideal for winter sun. 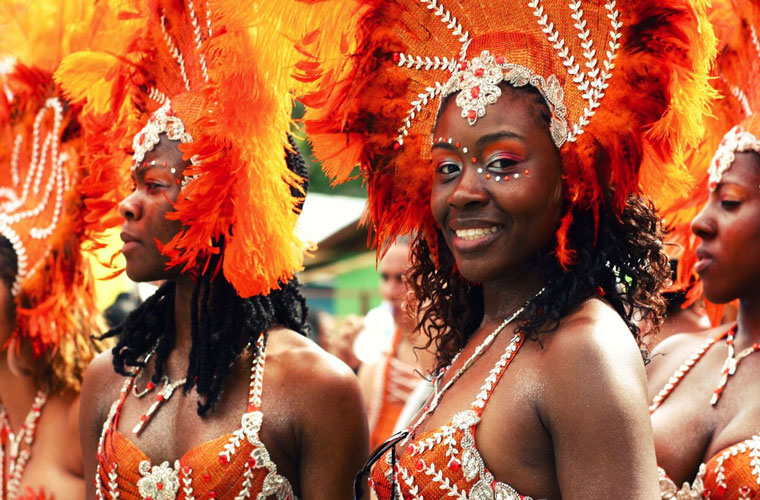 During summer, the centre of the island can become humid, yet the coast is remarkably pleasant. Despite temperatures hitting around 32 degrees on average, it tends to feel much cooler due to the trade winds coming across the Atlantic. Although rainfall is higher in the summer months, there’s always plenty going on across the island that will provide an authentic Saint Lucian experience, and really allows travellers to immerse themselves in a different culture. The Lucian Carnival, for example, takes place in June, and with over-the-top costumes, skilled local dancers, and an all-round party atmosphere, this carnival certainly gives Rio a run for its money!