Solo Cruising – Going it Alone on a Cruise

Solo cruising for the first time can be a daunting experience, but it really needn’t be.

If you’re travelling by yourself, cruising is one of the best ways to do so.  Not only does the nature of sea travel allow you to keep yourself to yourself if you wish, but it’s also an excellent way to meet others who share similar passions and interests.  If you’re considering taking a relaxing holiday by yourself, here are some tips for making the most of the experience:

In terms of dining, cruise ships particularly lend themselves to solo travellers who wish to converse with others over a glass of wine and mouthwatering cuisine. While on board dining rooms usually include a limited number of tables for two and four, there are plenty of larger tables, designed for mixing groups of travellers together.  Six and eight occupancy tables are typically the norm, so there’s often a very diverse range of age, interest, and conversation.  Dining companions often become a very important part of the holiday.  Meeting night after night, the dining table is a great place to discuss the activities or excursions undertaken that day, or chat about plans for the following morning.  However, if you prefer a quieter dining experience, there will be a number of alternative dining options on board, such as buffets, cafes, and speciality dining restaurants, which allow solo travellers to enjoy some time to themselves, not forgetting the exceptional room service selection on board, should you wish to spend the evening relaxing within your own private accommodation. 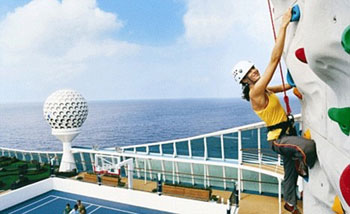 Of course, solo travellers are welcome to attend all events and entertainments put on by their cruise line during the days and the evenings, but many cruise lines will also host a number of events specifically for solo travellers who are keen to meet others in a similar situation.

Many cruise lines host a ‘singles night’ on the first night of a cruise, and there’s no reason why solo travellers can’t use the opportunity to simply get to know others who are also holidaying solo.

Keep an eye out for other events aimed at solo travellers, too. Cunard, for example, are known for hosting a solo travellers coffee mornings each day, giving individuals a chance to chat about the day ahead with others, and perhaps make plans for a game of tennis, a dip in the pool, or a delicious lunch.

There are many online forums dedicated to cruising, such as the Cruise Club Forum, which are a great way to get to know other travellers before embarking on your voyage.

Forums allow for travellers booked onto the same cruise to swap knowledge and information prior to boarding, helping travellers to really make the most of their time both at sea and on shore.  On board meet ups are frequently arranged, so that forum users can put a face to the avatar, and this is a great way to meet like minded people.  Often held over a few cocktails in one of the on board bars, the atmosphere is relaxed and down-to-earth, and a couple of drinks are a great way to help break the ice!

While we’ve looked at the best ways to meet others on board when travelling solo, there is also another very important of solo cruising to consider before booking a trip – Is it worthwhile?

The answer really depends upon the cruise line, and the ship, you choose to sail with. Some are particularly friendly towards solo travellers, providing very cost effective methods of seeing the world.

Others, unfortunately, are lagging behind in terms of offers and rewards for those enjoying some time to themselves.

As you’ll now if you’ve cruised before, prices are often listed per person, based upon at least two people sharing a cabin.  This typically means that, if you’re travelling solo, you will be expected to pay not one, but two fares! However, there are now many cruise lines who offer great deals for solo travellers, so to make your trip cost effective, seek out these single-friendly lines.

Although Cunard do not offer single cabins, they do regularly offer deals for solo travellers which means that they only need to pay 50 percent of the second fare.

Norwegian Cruise Line are another cruise line that have recently introduced a substantial amount of single cabins throughout several vessels within their fleet.

Royal Caribbean are one cruise line that does not yet offer single cabins, or reduced rates for solo travellers.  Single occupancy cruisers are, unfortunately, expected to pay for two full fares.  However, in late 2013, the cruise line did offer a small incentive for single travellers – double the amount of loyalty points per cruise.  If you’re looking to make your way up the ranks to receive great discounts and access to restricted areas, this is an excellent way to boost points quickly and easily.

If you’re new to cruising, you may be surprised by how many solo travellers you will meet during your voyage.

Cruising really is one of the most friendly and non-judgmental ways for solo travellers to see the world, take a break, and enjoy some much-needed ‘me’ time.