Star Gazing Of A Different Kind 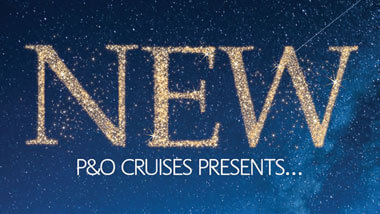 P&O Cruises have announced the fantastic news of more famous faces to appear on board. Over recent years the cruise line have become synonymous with bringing famous celebrity personalities to the seas and they will once again present some famous faces this year from both stage and screen. The unique cruises provide the opportunity for passengers to experience intimate performances and meet the stars in person.

There have been several exciting celebrity announcements from P&O Cruises but this time around the cruise line are more excited than ever to unveil the largest ever choice of star-studded cruises sailing this autumn and into 2014. Imagine hugely talented, audience wowing entertainers from the West End, bring them all together in concert and you have the makings of a very exciting performance. I think we’ve kept you waiting long enough…time for the famous faces!

Britain’s leading musical star will take to the seas with P&O Cruises. Having won critical and public acclaim for over 25 years, the amazing talents of this wonderful West End and Broadway performer will be welcomed on board to entertain P&O Cruises guests. The phenomenal multiplatinum recording artist is set to put on a spectacular show.

Spanning several decades, the performers many stage show credits include a role as Marius in Les Miserables; Raoul in Phantom of the Opera and Edna Turnblad in Hairspray, the role that won him the 2008 Laurence Olivier Award for Best Actor in a Musical. Michael has entertained audiences for years and will now bring his awe-inspiring talents aboard P&O Cruises Aurora for a 10 night Baltic sailing departing 9 December 2013 (R322).

This spectacular concert celebrates the unforgettable great musical numbers from the biggest shows. The renowned West End Men showcase their superb voices and tremendous personalities with a selection of signature numbers from some of their most famous roles together with a collection of some of the best known show tunes in the world. This remarkable show takes passengers to the heart and soul of a definitive musical theatre concert and now the fabulous talents will bring their performance on board P&O Cruises Ventura sailing a 12 night Canary Islands cruise departing 29 September 2013 (N325).

Since launching back in 2001, this exciting and pulsating show has become THE most successful high-profile 80’s performance. The runaway success from Tony Denton Productions has reached sensational heights and achieved fantastic acclaim from critics and audiences throughout it’s time. A completely unique show, Here and Now delves deep into the world of 80s pop, bringing together many of the most iconic and influential names from the era. Six artistes over six nights perform their hits and much more. Some of the artistes even came back to the show purely to take part in this on board performance so this is a superb unique opportunity to take a step back in time and relive your youth. Here and Now will be aboard P&O Cruises Oceana sailing a 12 night Western Mediterranean cruise departing 22 October 2013 (E325). Joining you on board will be Paul Young, Howard Jones, Heaven 17, Toyah Willcox, Carol Decker and Clare Grogan.

Boasting a career that encompasses 19 Top 40 UK singles, including two Number Ones, David Essex his legendary singing, acting and composing talents to the on board stage.

It was while filming That’ll be the day that he wrote Grammy award-winning ‘Rock On’, which reached number one worldwide, followed by ‘Gonna Make You A Star’ and by the mid-70s when he released his biggest hit album, ‘All The Fun Of The Fair’, “Essex Mania” was in full flow.

Since first taking to the West End stage for his role in Godspell, David Essex has gone onto feature in hit shows such as Evita, Footloose and Aspects of Love alongside producing albums, writing his own musicals, performing multi date tours and representing Comic Relief. The celebrity has gone onto achieve an OBE and join the cast of EastEnders. David Essex will be aboard the P&O Cruises Azura sailing a 15/16 night Caribbean Transatlantic voyage departing 1 November 2013 (A326N/A).

Do not miss a very special performance from the world’s most prolific and leading classical crossover artist. Katherine’s career began in 2003 and since then she has gone on to perform for many special guests including the Prime Minister and Her Majesty the Queen. Having enjoyed a phenomenal rise to fame, the artist has achieved sales in excess of seven million albums and such success made her the fastest selling soprano of all time.

Standout performances include duets with operatic legends such as Andrea Bocelli, Plácido Domingo, Jose Carreras and Dame Kiri Te Kanawa. Katherine has become a hugely popular artist and many credit her talents for making the genre both accessible and enjoyable across the world.

Katherine will take to the stage aboard the iconic P&O Cruises Oriana, a ship to provide the perfect elegant backdrop to this special performance. Oriana will set sail for two Cruise Break itineraries featuring Katherine Jenkins starting with a 4 night sailing departing 31 October 2013 (X323) and followed by another 4 night voyage departing 27 November 2013 (X326).

All of these exciting cruises are on sale now and do not forget the magnificent Strictly Come Dancing, Food and Wine and Music Festivals at Sea cruises all still available.

For more information call us now on 01246 819819 to speak to one of our expert sales consultants or to read more about the sailings click here.