The City That Never Sleeps 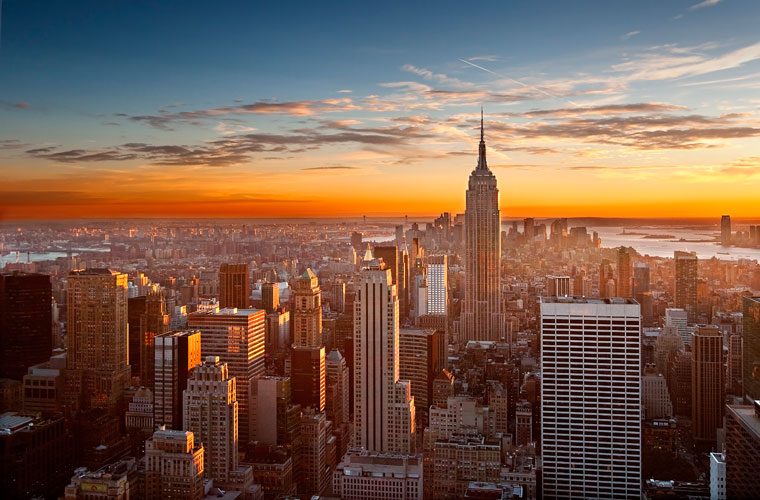 New York is, without a doubt, one of the most exhilarating cities in the world and, luckily for us cruise lovers, it’s location on North America’s Atlantic coast means it can easily be accessed by sea. It has become one of the USA’s most popular ports of call, offering unlimited attractions, activities, and sights to please everyone. From the breathtaking views across Central Park to the neon lights of Times Square, and from relaxing dinner cruises along the Hudson to trips to the tops of the tallest skyscrapers, there’s never a dull moment in New York. It’s not known as the ‘city that never sleeps’ for nothing! 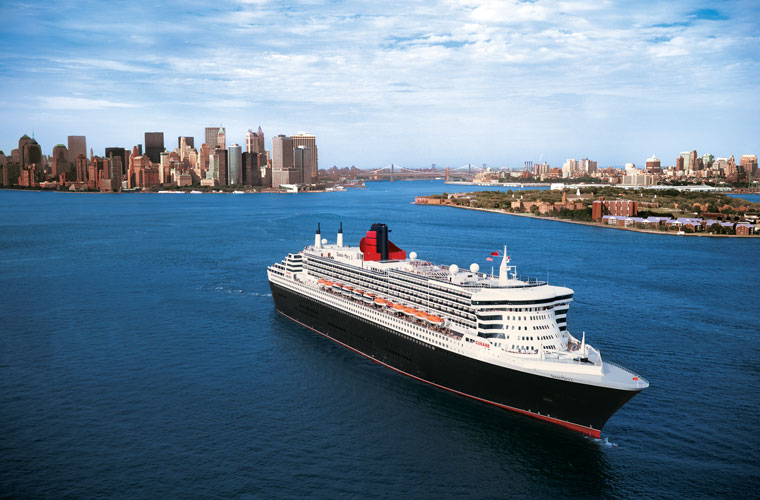 Where Your Ship Will Dock

It’s important that you double check which port your ship sail from and/or arrive into, as there are 3 ports in the area that offer easy access to Manhattan:

This is perhaps the most convenient port in the New York area, as it is located just one mile from the south end of Central Park, which is where you’ll find the Central Park Zoo and the Wollman Ice Skating Rink – two of the park’s most popular attractions. Norwegian Cruise Line, Costa Cruises, Celebrity Cruises, Carnival, Crystal, and Princess Cruises all use the Manhattan Cruise Terminal.

The Brooklyn Cruise Terminal is certainly up-and-coming, and while it is located on the borough of Brooklyn, rather than Manhattan, it does have its own advantages – most notably its location directly opposite the State of Liberty standing tall on Liberty Island. You can get some of the best views in the city of Lady Liberty from you ship docked into Brooklyn. Cunard’s Queen Mary 2 uses the Brooklyn Cruise Terminal, and it’s roughly a 25 minute taxi ride to the Empire State Building.

While the Cape Liberty Cruise Port is located in neighbouring New Jersey, rather than New York, it is still very convenient for getting into the Big Apple. Royal Caribbean uses the Cape Liberty Cruise Port, and some Celebrity ships, including Celebrity Summit, also dock here. It’s roughly a 40 minute journey by taxi or coach into the heart of Manhattan. 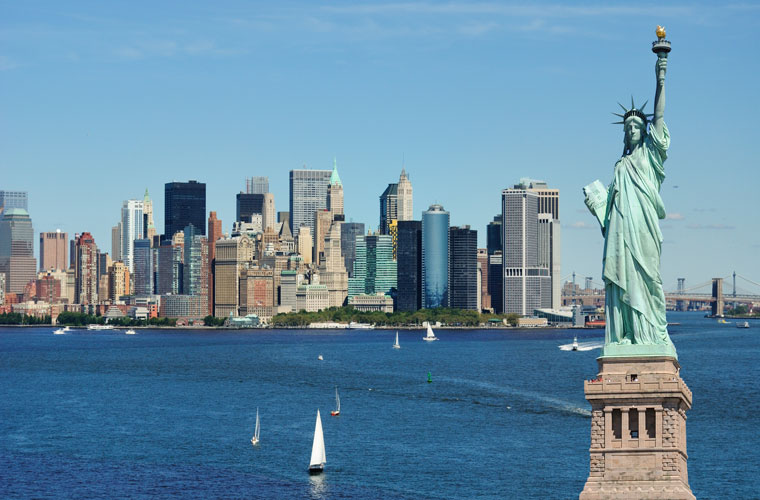 One Day in New York City

If you’re visiting New York as part of a Canada and New England adventure, or are sailing with Cunard which offers 2 week return transatlantic itineraries that include time in the city, you’ll want to plan your day carefully to ensure you get to see and do everything you’ve dreamed of. Here are some pointers to help you see the very best of the city, depending on your areas of interest: 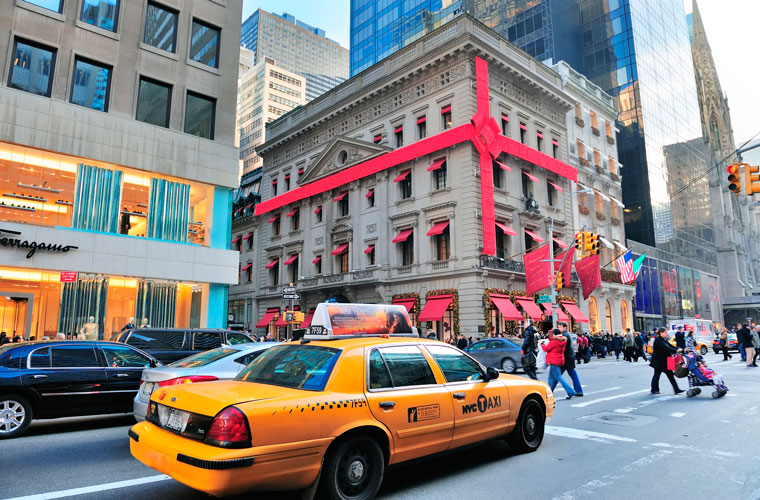 For the best in New York shopping, head to Madison Avenue, just one street over from 5th Avenue. Starting on the east side of Central Park, just south of the lake, take a stroll towards the south end visiting Ralph Lauren, Gucci, Oscar de la Renta, Jimmy Choo, and finishing up at Barneys. Don’t forget to check out the funky and unusual boutique stores in SoHo, too. Take a taxi down to Washington Square Park, and wander the streets between 8th & West Houston, and Broadway & Avenue of the Americas for the chic independent and foreign stores. 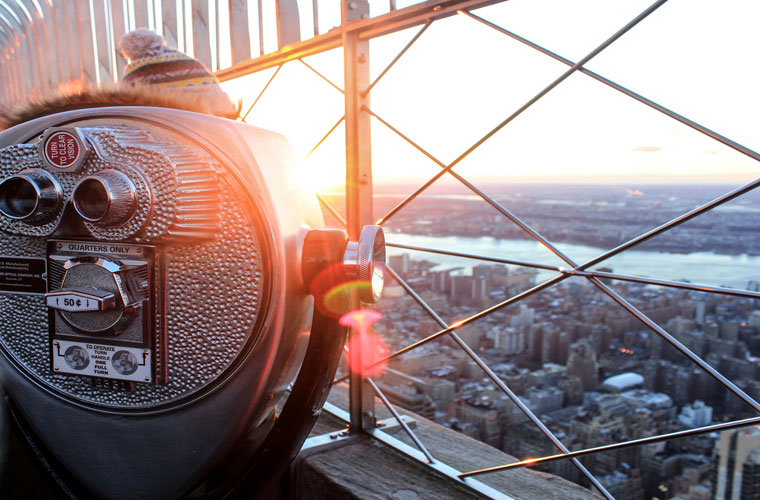 It’s impossible to do all of your New York sightseeing in one day, but you can give it a try! While there’s plenty to see in New York, there are some things you absolutely cannot afford to miss. The Empire State Building is one of them, but consider whether going to the top of the nearby Rockefeller Center may be better. From here, you get the same breathtaking views across the city, but you’ll also be in a great position to photograph the Empire State Building itself. After this, it’s time to pop into Grand Central Terminal to marvel at the incredible interior of the building, and finally no trip to New York would be complete without a stroll through the neon-lit Times Square. 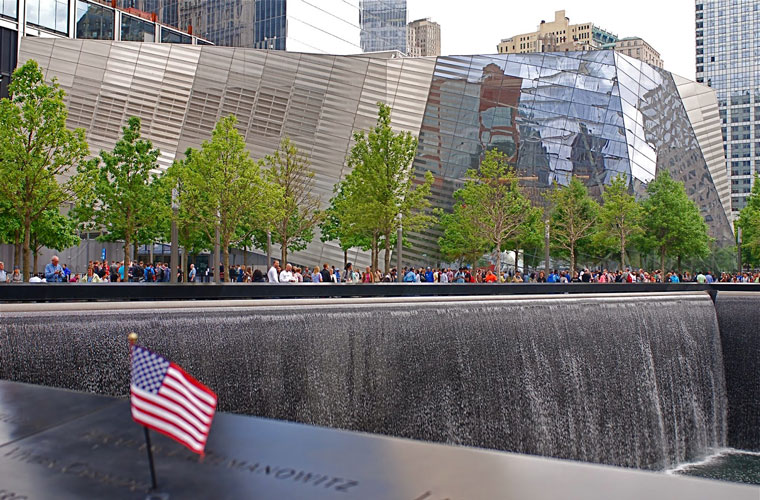 If you’re looking for a mix of history and culture in New York, the city offers plenty of museums to pique your interest. Two of the best are the New York Historical Society Museum & Library, which has exhibitions dedicated to the Civil War, the city’s large Jewish community, and New York’s most celebrated authors, and the New York Transit Museum, which demonstrates the city’s public transport transformation from past to present. To learn more about New York’s more recent history, a visit to the 9/11 Memorial Museum can be a very eye-opening experience. 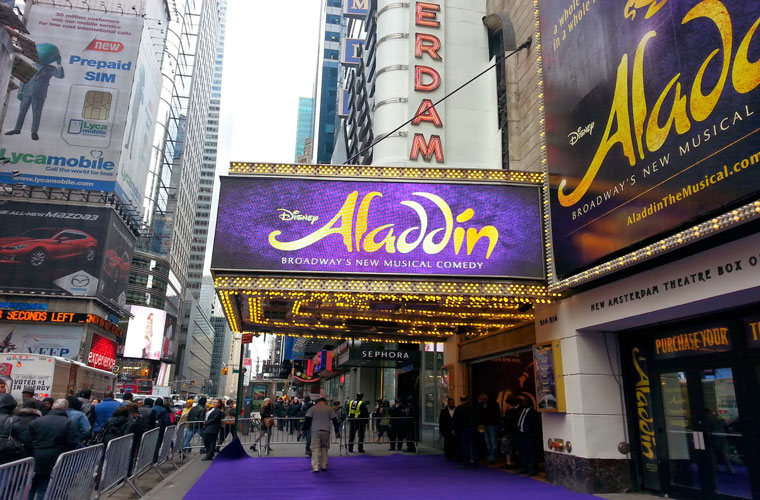 Sailing with kids? They will absolutely adore being amongst the hustle and bustle of New York. Start your day with a ride on the Central Park Carousel, visit the Central Park Zoo and then, time allowing, take in a matinee of a child-friendly Broadway show, such as The Lion King, Matilda, or Aladdin. If you’re hungry after such a busy day, New York is filled with cupcake bakeries selling every flavour of cupcake you can imagine. 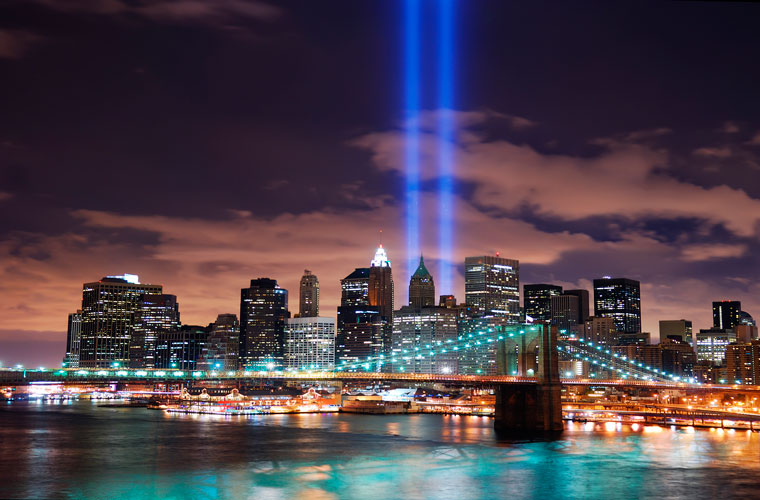 New York is often used as an embarkation or disembarkation port for Canada and New England itineraries, especially by Princess Cruises but it’s also a great starting point for plenty of other exciting itineraries. Whether you’re heading down to the sunny Caribbean, venturing north towards the Canadian Provinces, or sailing transatlantic to or from the United States, you’ll find that many cruise itineraries either start or finish in New York. This provides the perfect opportunity for you to extend your holiday with pre or post cruise hotel stays, and take in even more of this magnificent city. If you’re planning to stay a little longer, here are some of the less common activities and attractions in New York that we recommend: 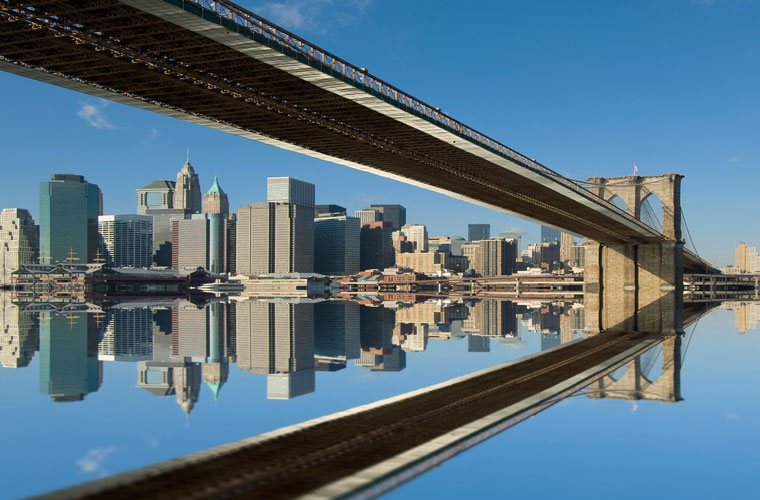 Take a walk across the magnificent Brooklyn Bridge (or take a taxi if your feet are hurting from all that sightseeing), and you’ll find yourself in one of New York’s most up-and-coming boroughs. Brooklyn is a favourite of young professional and students who love the borough’s quirkiness, its brownstone properties, and its vibrant nightlife. Over in Brooklyn, you’ll find the Brooklyn Museum, which is one of the oldest and largest in all of the state. The exhibits have an international focus, looking at the different cultures residing in Brooklyn, and how Brooklyn has influenced other destinations and vice versa. 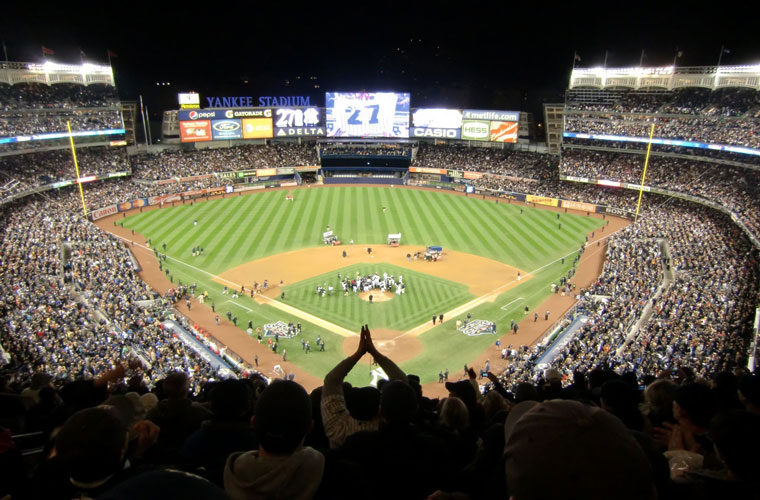 New York is known for having some of the best sports teams on the east coast (although Boston might disagree!). While you’re in New York, its well worth spending an evening at a game, grabbing a beer and a hot dog and waving around a big foam finger in true New Yorker style. For baseball, it’s got to be the Mets or the Yankees, while the Knicks are the state’s premier basketball team. 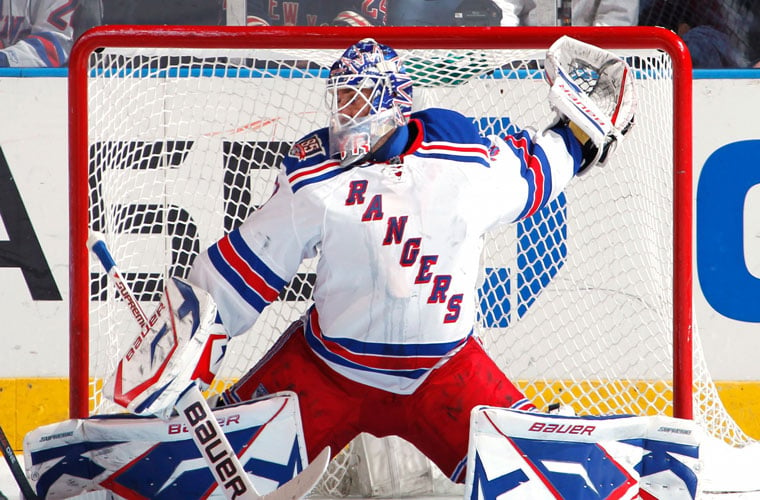 The Rangers rule at Ice Hockey, and a trip to the MetLife Stadium offers up a chance to see a game of real American Football, played by the New York Giants. 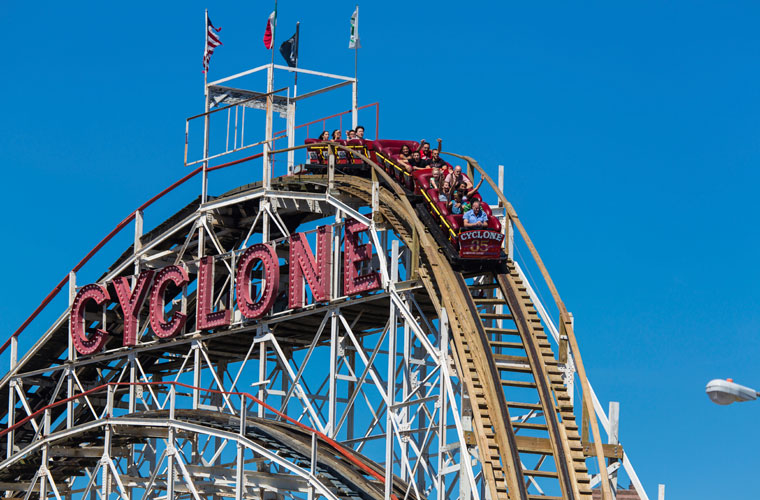 Coney Island isn’t just for kids – it’s a real life piece of classic Americana, and offers just as many unique photo opportunities, offering a glimpse into America’s past, as it does rides and attractions. Construction on Coney Island started in the 1840s, and slowly grew from a natural habitat into a landscape dominated by traditional seaside amusements. Today, it’s very much the same, with its own circus show, aquarium, bumper cars, and rollercoasters at Luna Park. Coney Island aims to ‘defend the honour of American Popular Culture’, and it really is like taking a step back in time. 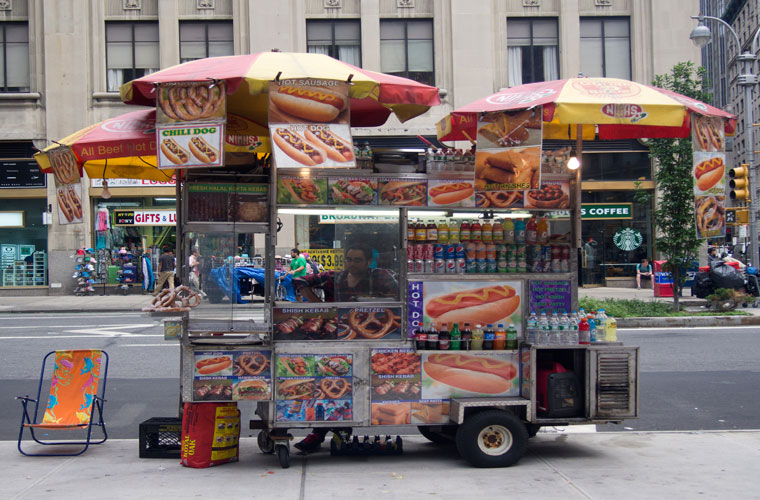 New York is a cultural melting pot as its location on the Atlantic coast was often the intended destination for Europeans, especially the Irish, who sailed across the ocean to the New World in search of a better quality of life back in the late 1800s. Any cuisine you’re craving, whether it be Mexican, Chinese, Cuban, British, Indian, and so on, you can easily find in New York City. There are, however, a few treats that are distinctly ‘New York’.

First, the hot dog. While the hot dog is thought to have originated in Germany, they found fame in New York, where they were typically sold from street vendors as a cheap yet filling snack. Nathan’s Famous, which started out feeding the thrill-seeking masses visiting Coney Island, has become a nationwide phenomenon, selling everything from a standard hot dog to the more adventurous and unusual ‘pretzel dogs’. Wash it all down with a Dr Brown’s soda – a soft drink common in both New York and Southern Florida.

There’s never a bad time to visit New York – it’s a destination that thrives in the warmer months, offering a chance to relax in the sunshine in Central Park, spend a day at the zoo, or take a jog around the ‘Jackie O’ Reservoir, but it also really comes to life as the festive period approaches. 5th Avenue creates the perfect shopping paradise for those looking for unique Christmas presents for friends and family, with designer stores such as Cartier and Gucci, and world famous brands like FAO Schwarz (famous for appearing in the Tom Hanks movie Big), and Bergdorf Goodman which featured in the Dudley Moore classic Arthur.

Spring perhaps brings the most pleasant weather conditions, although if you’re planning to get out and about in New England either before or after your cruise, be aware that many of the more seasonal attractions, such as ferries across to Martha’s Vineyard and Nantucket, don’t sail with any regularity until the summer. Summers in New York can be very hot, and an advantage of travelling at this time of year is that you’re much more likely to experience warm conditions at sea, which means you can sunbathe on deck, take a swim, or enjoy a spot of al fresco dining on board.

However, Atlantic conditions in the winter can also be surprisingly pleasant, with temperatures of 18 degrees not unheard of in mid-November. Whenever you cruise to New York, you’ll instantly fall in love with the Big Apple.