Home Blog Cruise destinations The Coolest Restaurants in the World

The Coolest Restaurants in the World 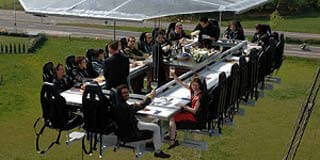 With a head for heights and a passion for food, we set about on the search for the coolest restaurants in the world. From 5 metres below sea level to 7,700 feet in the air. 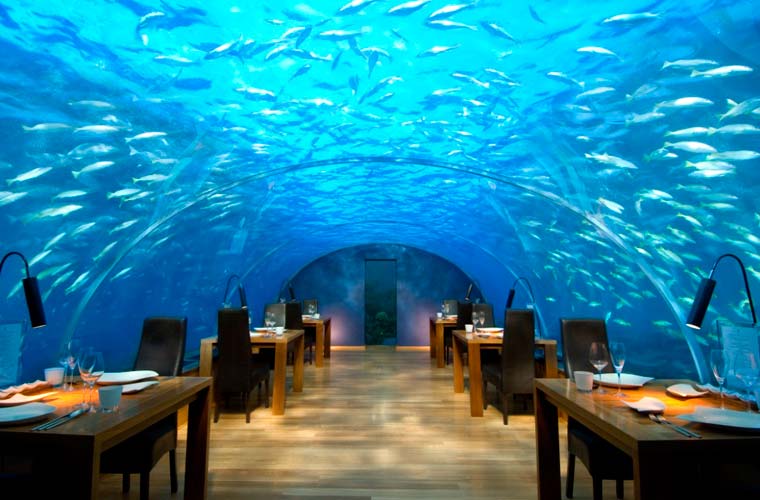 The Conrad Maldives hotel is home to Ithaa Restaurant; the world’s first all-glass undersea eatery. Rated ‘Most Beautiful Restaurant in the World’ by New York Daily News in 2014, Ithaa sits 5 metres below sea level and offers 180° panoramic views of the coral gardens that surround it.

Ocean life so beautiful it may just distract you from your dinner swims all around the restaurant; the only thing keeping you focused on your plate is the delicious European cuisine served across four courses at lunch and six courses at dinner. Ithaa, meaning ‘mother of pearl’ in the Maldivian language of Dihevi, also caters for special occasions and weddings, and it is difficult to imagine a more unique venue! 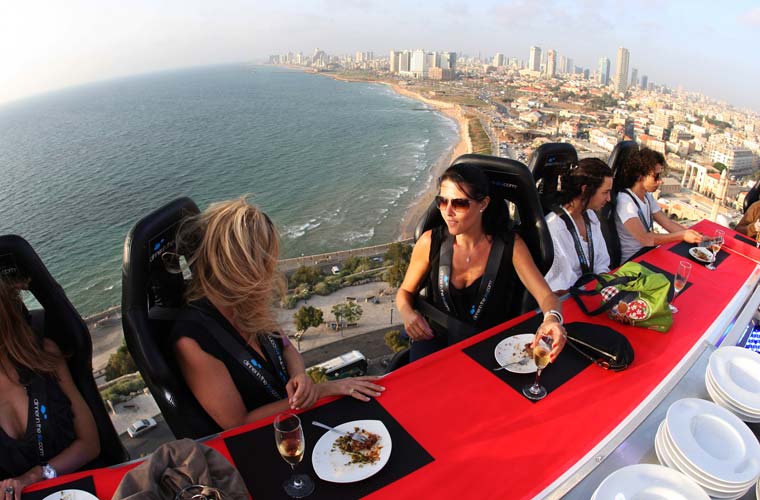 Dinner in the Sky, Worldwide

Not one for those with a fear of heights or a bad case of vertigo, Dinner in the Sky sees guests take their seat at a table suspended 50 metres in the air. Twenty-two guests are joined by three (rather brave) chefs and waiters, with the option for a second crane-hoisted platform to accommodate entertainment such as live performers.

Bringing new meaning to the term ‘high-end restaurant’, diners will enjoy a four-course meal and wine, all while strapped into their specially designed seat (which rotates 180° for those daring enough to swivel around and admire the view). Lights, heating, sound and even TV screens can all be added to the suspended platform and dinner is served come rain or shine, though thankfully not in high winds.

Need the loo? Simply excuse yourself from the table, before bungee jumping back down to earth. We’re just kidding; you and your fellow diners will be lowered to ground in approximately one minute for your toilet trip, before being hoisted back into the air once you’ve answered the call of nature. 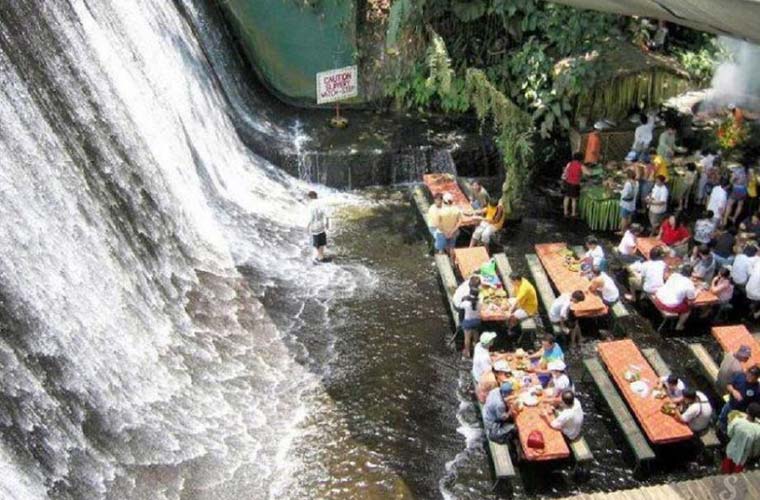 Dip your feet in the waters of Labassin Waterfall Restaurant and you will experience a whole new take on paddling. Overlooking Lake Labassin and surrounded by the Philippines’ stunning natural wilderness, diners will enjoy authentic local cuisine served at bamboo tables; all at the foot of a waterfall. Cooling spray from the waterfall acts as nature’s own air conditioning, while traditional dancers and musicians entertain diners.

A much-photographed location and part of many a bucket list, dining at Labassin Waterfall Restaurant is a unique and unforgettable experience. 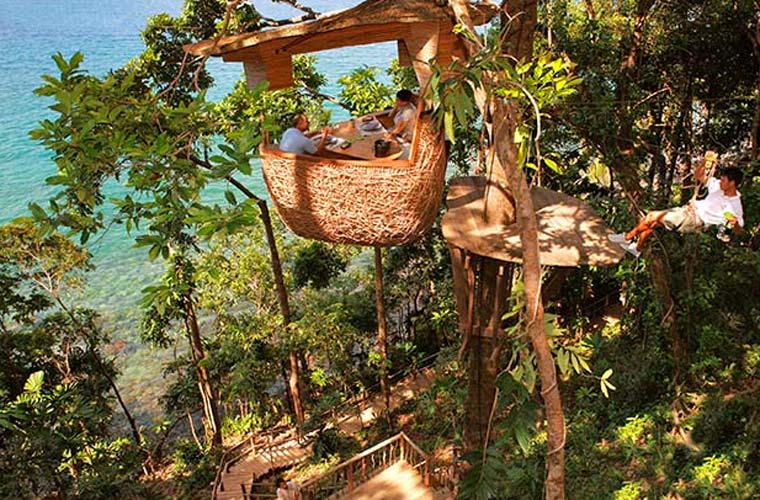 Fine dining is taken to a whole new level on the remote Thai island of Koh Kood, where Treepod Dining wines and dines guests high in the foliage of the island’s ancient rainforest.

Combining amazing views of surrounding beaches, delicious food and a ‘flying’ waiter on a zip line, Treepod Dining sees guests seated in a bamboo pod which is then hoisted 5 metres above ground into the tree canopy above.

Treepod Dining took 2 ½ years from concept to completion and amazingly has NO bolts or attachments to the actual trees themselves! 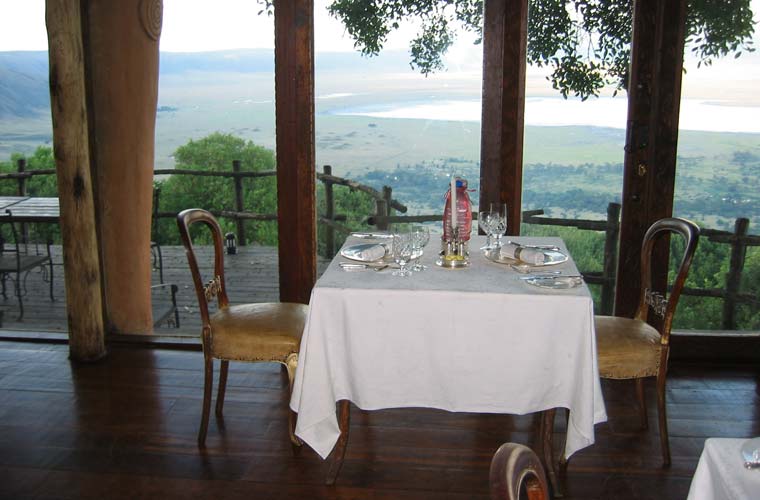 Incredible views take centre stage at this restaurant, thanks to its dramatic setting on the edge of the Ngorongoro crater; the largest unbroken volcanic caldera in the world.

Though elbows on the dinner table may be discouraged, binoculars certainly are not and you’ll need yours to get a closer look at the game that wanders the crater floor below. With spectacular panoramas across the stunning area, the views from the restaurant are incomparable. 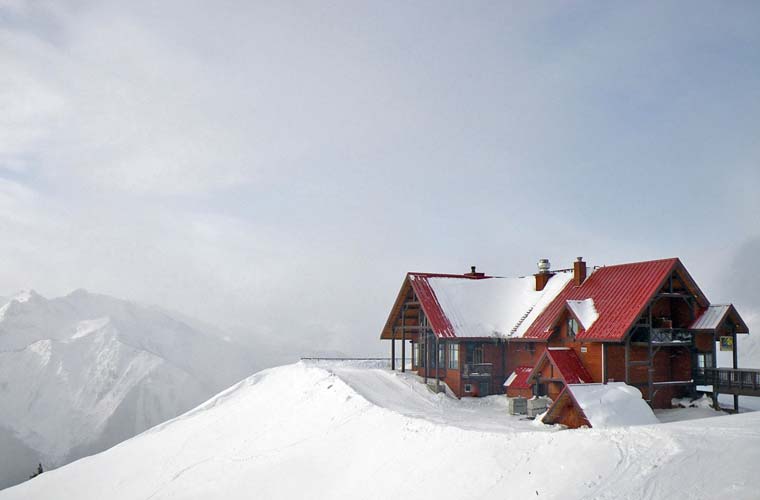 Reached by a 15 minute gondola ride, Eagles Eye Restaurant is located 7,700ft above sea level and diners can expect dizzying views over five national parks at once and with the snow-capped Rockies on the horizon.

Described as an ‘unparalleled gastro sensory adventure’ and headed by Michelin-starred Spanish chef Paco Rancero, SubliMotion began taking the White Isle by storm in May and has been a popular destination for the island’s richest residents and visitors ever since. Over three hours, and at a cost of £1,235 per head, SubliMotion promises to stimulate every sense in a ‘complete and unprecedented emotional experience’.

Details of what to expect remain a carefully guarded secret but they do promise haute cuisine in multi-sensory surroundings. 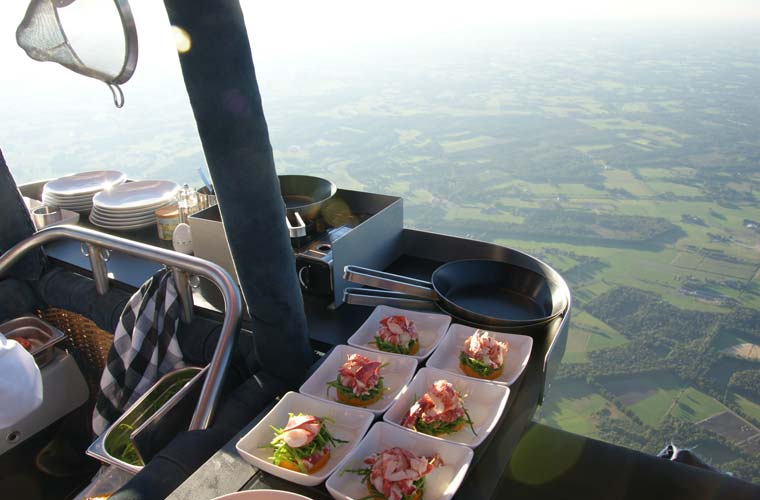 We aren’t quite sure at what point Dutch Master chef Angelique Schmeinck looked at hot air balloon and decided it would make the perfect oven, but she did, and the result in CuliAir Sky Dining.

The hot air balloon becomes an enormous convection oven for this unique dining experience, its 100°c heat proving the perfect temperature to cook a menu that includes Scottish lobster and country guinea fowl. Dishes are transported to the crown of the balloon in specially designed steel baskets, where they are cooked to perfection before being served to diners waiting patiently in the basket of the balloon.

For just £360 a head, up to 14 people can enjoy breakfast at sunrise or sunset dinners, in what is surely one of the most exciting meals they will ever eat. 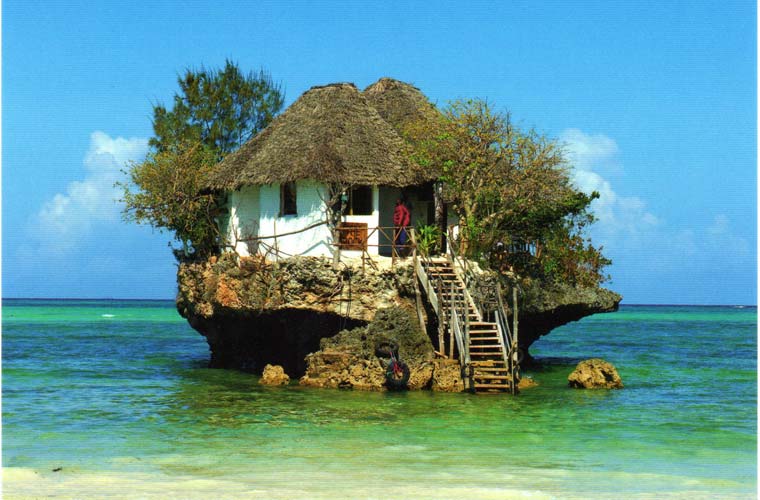 Built on an outcrop along the Michamwi Pingue peninsula, The Rock can be reached by foot in low tide but only by boat at high tide. The unique eatery is one of the most beautiful in the world and has hosted many a marriage proposal since its launch in 2012, when its founder recognised the tiny island’s potential.

Ingredients don’t get much fresher than those served at The Rock; seafood is caught each morning in the emerald waters of the Indian Ocean that surrounds the restaurant.