The Most Terrifying Observation Decks in the World 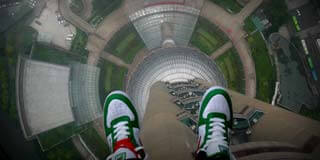 After reading the recent story about a throng of adorable puppies spooked by the 180 metre drop below the Shiniuzhai footbridge in China, we thought we would take a tentative look at other vertigo-inducing viewpoints around the world. (you can read the story here if you haven’t seen it)

So here they are; our pick of the top ten most terrifying observation decks in the world. We should probably warn you that this certainly isn’t one for the faint hearted or the scared of heights! 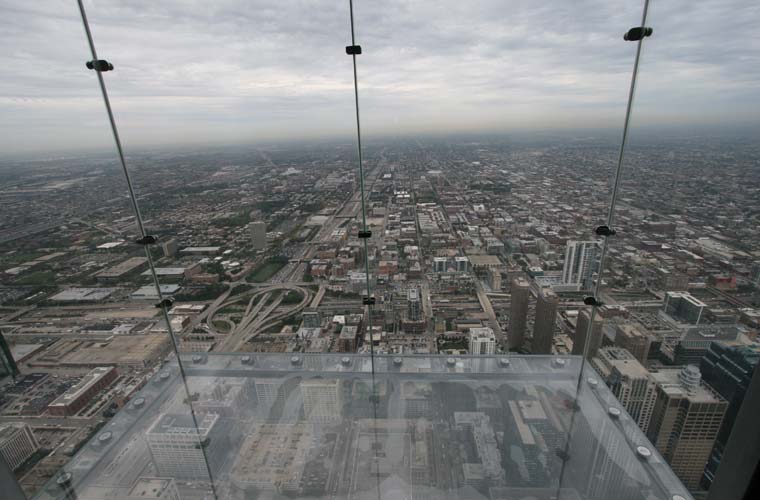 Located on the Skydeck of the Willis Tower (formerly Sears Tower), The Ledge was borne from years of forehead prints, left on the glass by visitors who were desperate to catch a glimpse of the ground below the eighth tallest building in the world.

Suspended 1,353ft in the air, the Ledge’s glass boxes extend 4.3ft out from the Skydeck on the 103rd floor of the building. Three layers of 0.5” thick glass are laminated into one fully-tempered structure, with each of the four glass boxes weighing in at a whopping 1500lb.

The Ledge reinforced an already terrifying reputation in May 2014, when the glass floor of one box shattered beneath the feet of the Garibay family as they posed for photographs. Unfazed, staff reassured the family and other visitors that it was actually just a coating that had cracked, rather than the glass itself, and that the box remained structurally very safe. Thinking the glass beneath you has shattered while you are 1,353ft in the air? Absolutely terrifying! 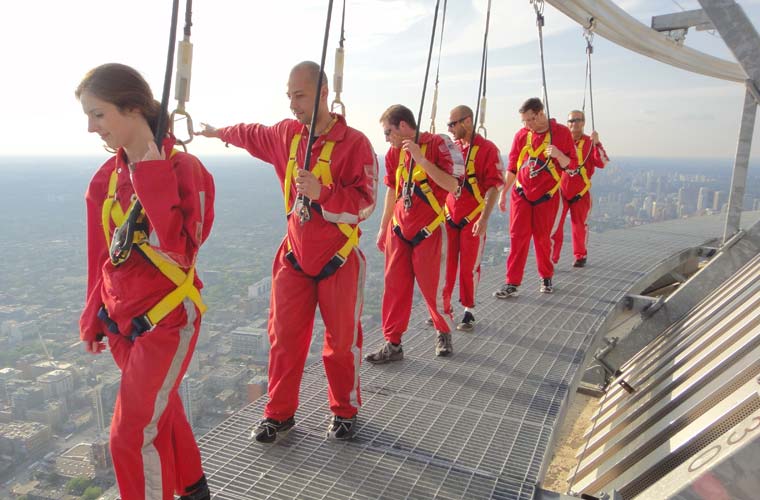 This observation deck is not only terrifying, it is record breaking too! On 8th November 2011, the CN Tower in Toronto was awarded with the Guinness World Record for ‘Highest External Walk on a Building’.  We don’t envy whoever had to climb up there to present that certificate!

The Edgewalk sees visitors don orange jumpsuits and walk without aid on a 5ft wide ledge that circles the top of the 115 storey tower. Visitors are attached to a safety rail and encouraged to test their limits at 1168ft above ground, leaning perilously off the edge of the tower with nothing but air in front of them.

If your stomach is up to it, follow your Edgewalk experience with dinner at the 360 Restaurant; a stunning venue with revolving 360° views of Toronto from 1151ft above. 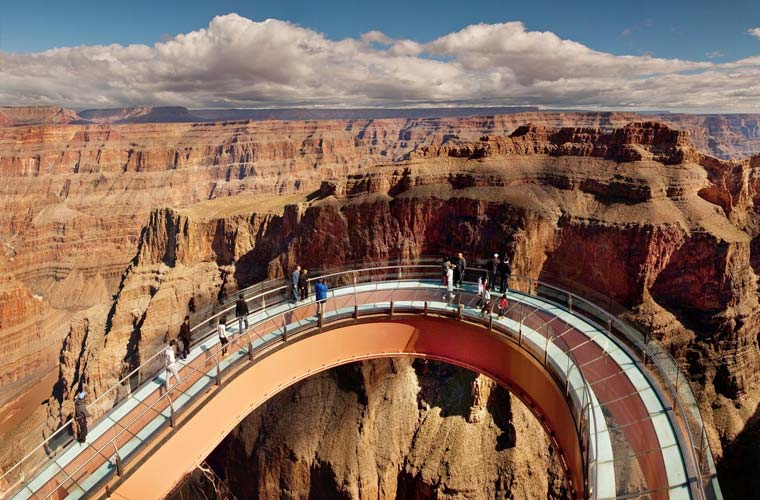 Located on the Grand Canyon West, near the Colorado River, the transparent horse-shoe shaped cantilever bridge of the Grand Canyon Skywalk suspends visitors three-quarters of a mile above the ground below. Suspended at 4770ft above the bottom of the Grand Canyon, the Skywalk extends 70ft from the canyon wall and three miles from the opposite wall of the Grand Canyon. Over 370,000 people visit the iconic observation deck every year, so it is perhaps a good thing that the structure is capable of holding the equivalent weight of 12 fully-loaded Boeing 747 jets. 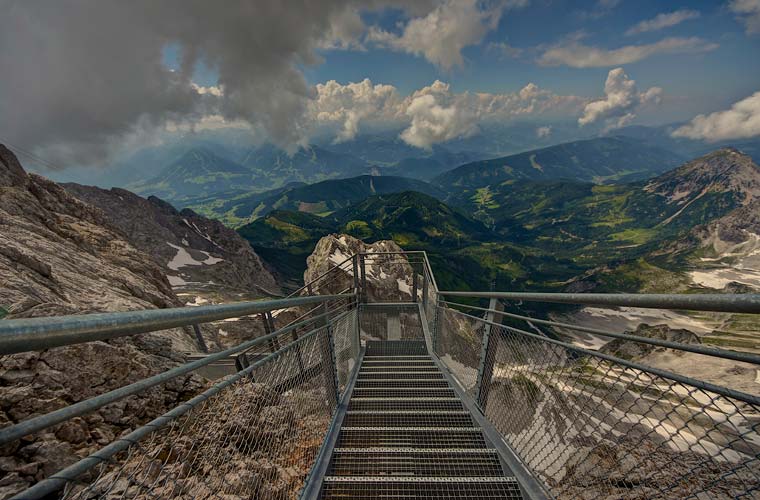 Deemed the ‘stairway to nothingness’, the Dachstein Sky Walk requires some serious mettle even before you step on the observation deck. Visitors must walk along a 100 metre suspension bridge (one of the highest in the country), tread delicately along the side of the cliff face, and finally walk down 14 steps off the end of the cliff and onto the clear glass platform of the Sky Walk. It really does lend a whole new meaning to the saying ‘leading you off a cliff’.

Perched 1300 feet above the ground, the Dachstein Sky Walk offers incredible views of the Dachstein Massif and Austria’s Alpine peaks for those who dare brave the experience. 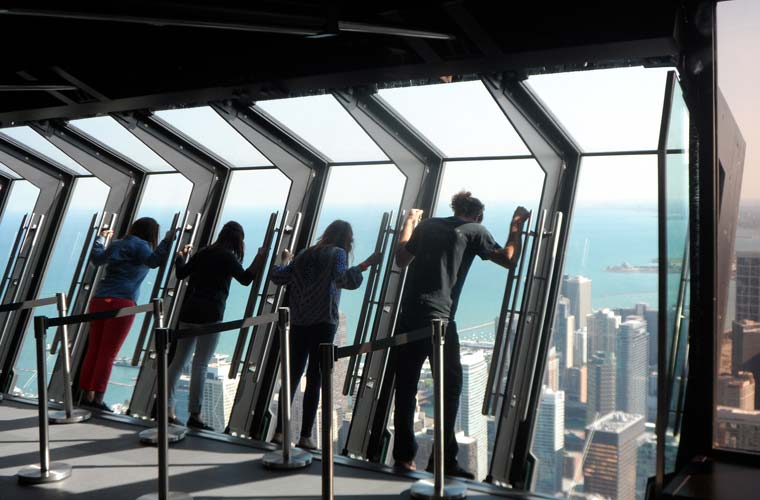 Located on the 94th floor of Chicago’s John Hancock Tower, TILT is the first observation deck of its kind in the world. Holding just 8 visitors at a time, a windowed section of the tower tilts out of the building, giving unique forward facing views of Chicago’s Magnificent Mile.

Two hand rails and a sheet of glass (albeit reinforced) is all that stands between you and a 1,000ft drop to the city streets.

Imagine the feeling you get in the pit of your stomach, when the rollercoaster is just about to plummet over the edge…now imagine you have no seatbelt.

This is the best way to describe the feeling you have as you walk along the Aurland Lookout; its award-winning design created to make you feel as though you could tip straight over the edge at any time. Beautifully crafted to fit in with the stunning landscape that surrounds it, the Aurland Lookout places just one pane of glass between you and the floor of the Aurlandet ravine that lingers 2’133ft below. 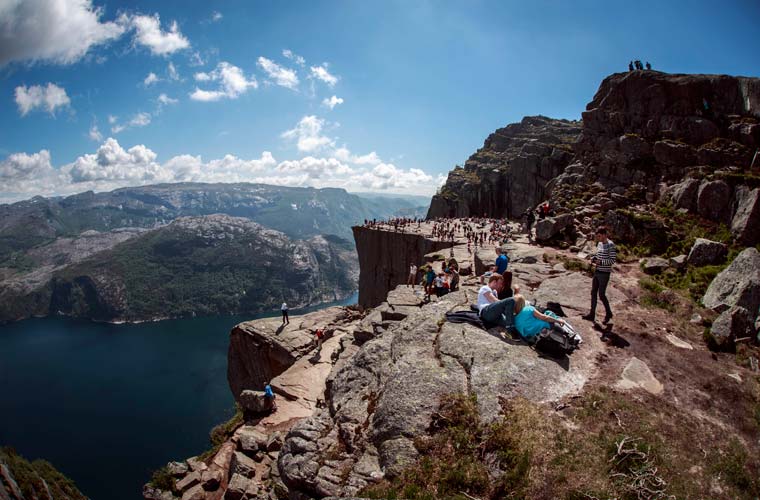 The Pulpit Rock may not be an observation deck per se, but it is still a mighty terrifying way to take in Norway’s stunning scenery. Rising 1982ft above Lysefjorden, Pulpit Rock is only accessible by a 2.4 mile hike, after which your hard work is rewarded with spectacular views over the valleys of the Ryfylke region. The flat topped rock was formed over 10,000 years ago during the Ice Age and a deep crack where Pulpit Rock meets the mountain has led to warnings that the plateau will eventually fall off at some point in the future.

Even more terrifying is the authorities’ refusal to install safety devices at the scenic spot; no fences, hand rails or even glass panes stand between you and the huge drop. 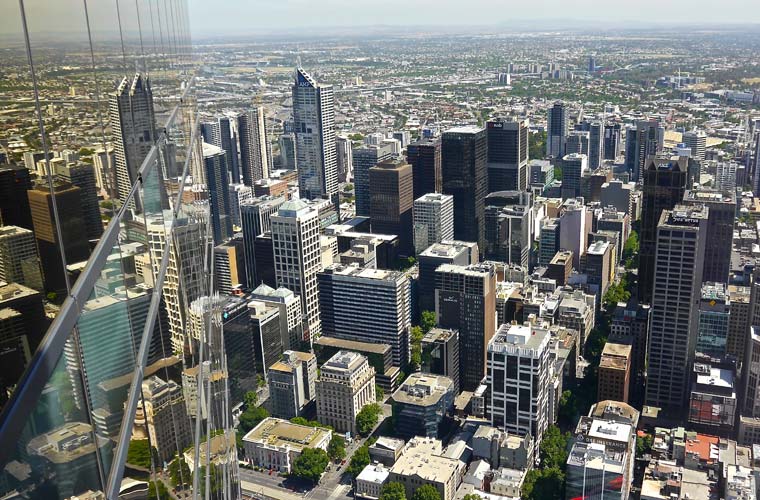 The Edge at Skydeck 88 – Melbourne

Experience awesome views of Melbourne from the Southern Hemisphere’s highest viewing platform: The Edge. Jutting 3 metres out of the building and lingering 984ft above ground, the glass cube of The Edge offers some of the best views in Australia.

Visitors to The Edge needn’t spend their time wondering what it would be like if the glass was to shatter beneath their feet; the newly introduced Eureka Vertigo experience uses green screen technology and a specially constructed set to give the illusion that visitors have fallen through The Edge and are clinging on for dear life! 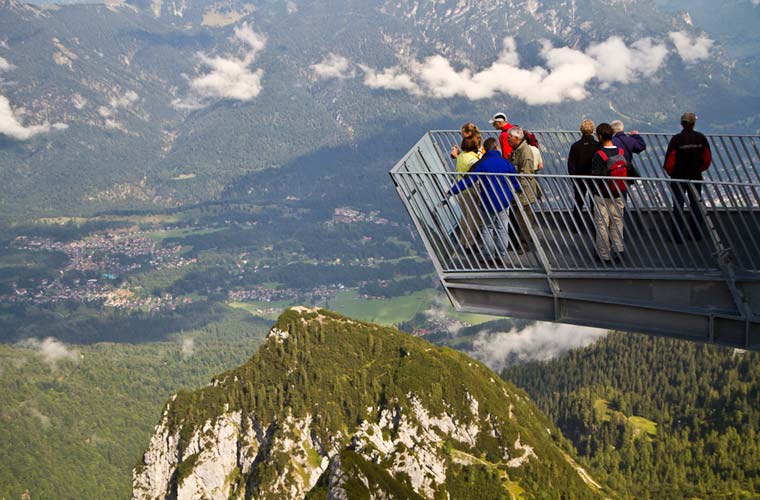 The two steel arms of the AlpspiX Viewing Platform in Germany extend 13 metres from the rock face, hovering perilously above a vertical drop of almost 3,281ft. A slightly sloping design gives the impression that you could slide from the edge of the arms at any minute, while a glass panel stands between you and the scenery below.

Views of the Zugspitze peak, Alpspitz North Face, Waxensteine and the Höllental Valley make the terrifying trip to the end of the imposing metal arms worthwhile. 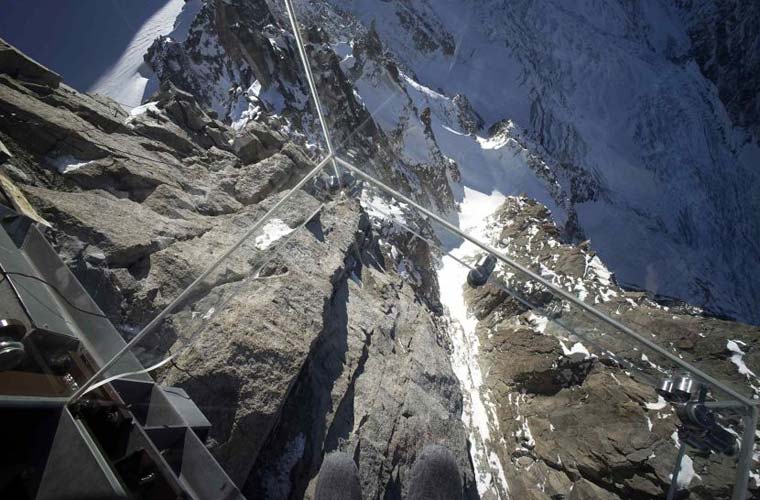 Step into the Void – Chamonix

Perched atop the 12,600ft Aguille du Midi peak in Chamonix, Step into the Void places you 3,395ft above the closest ground. Three layers of glass form a box design that took three years to develop and an area of open space just outside of the box makes the experience all that more realistic, as you are shot with a blast of fresh air just as you take a tentative step ‘into the void’.