The Top 8 Speciality Restaurants At Sea 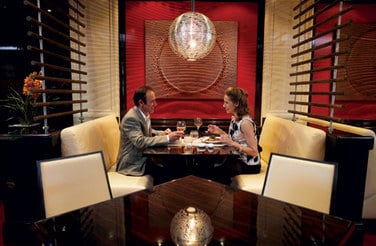 As anyone who has ever cruised before will tell you, destinations are important but good food and drink are always key aspects of an enjoyable cruise holiday. Of course, the on board buffet restaurants and main dining rooms are considered cruise ship staples – they’re always enjoyable and they’re reliable – but sometimes it’s nice to push the boundaries a little bit and explore different types of cuisine that you perhaps won’t find anywhere else – there dining venues are often referred to as speciality restaurants or select dining. Here are 8 of the most incredible dining experiences at sea: 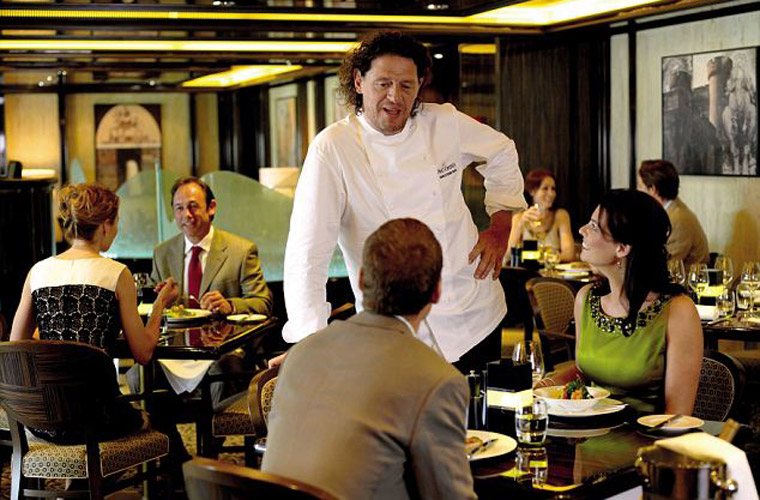 Marco Pierre White – the youngest British chef to ever have three Michelin stars to his name – is one of P&O Cruises’ new ‘Food Heroes’, and you can sample some of his mouthwatering concoctions on board P&O’s Ventura, in The White Room, which boasts a very definite Mediterranean menu – with dishes primarily originating from Italy and Spain. The menu is very suited to P&O Cruises’ new range of Mediterranean fly cruises departing from Genoa and Venice on board Ventura in 2014 – what better way to really experience all the Med has to offer than dining on authentic Mediterranean cuisine? Menu options include the likes of calamari fritti, escalope of foie gras, and grilled medallions of beef fillet. The menu typically changes each week, so if you’re on a two week cruise, why not visit twice? 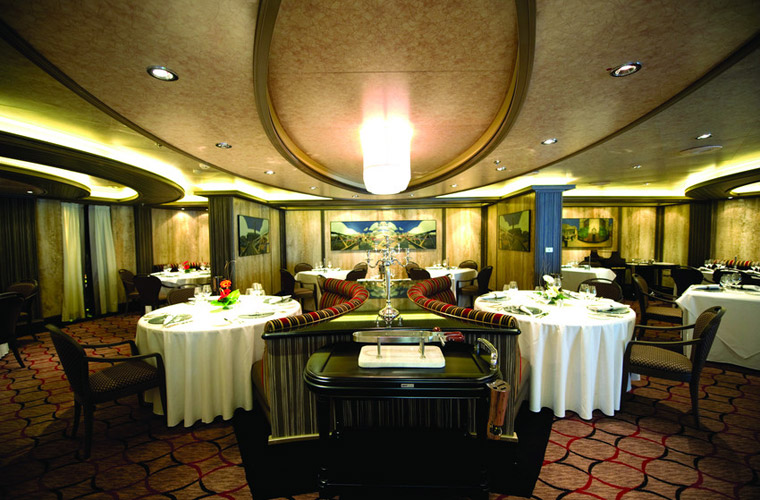 There’s no celebrity chef association here – just good, classic food that’s sure to excite. Seventeen, which is one of P&O Azura’s most spectacular fine dining restaurants, is ideal for cruisers who want a taste of home whilst they’re travelling the world. Seventeen largely focuses on traditional, quintessential British cuisine, but with modern and contemporary additions that provide a special twist. Think tender Welsh salt marsh lamb with fused with a red cabbage marmalade, Cornish sea bass with a succulent lobster tail on the side, and Bramley apple tart topped with a honey and lavender ice cream. It’s certainly not hard to find this wonderful restaurant on board – it’s named after its deck. Head up to 17 and you cannot miss it. 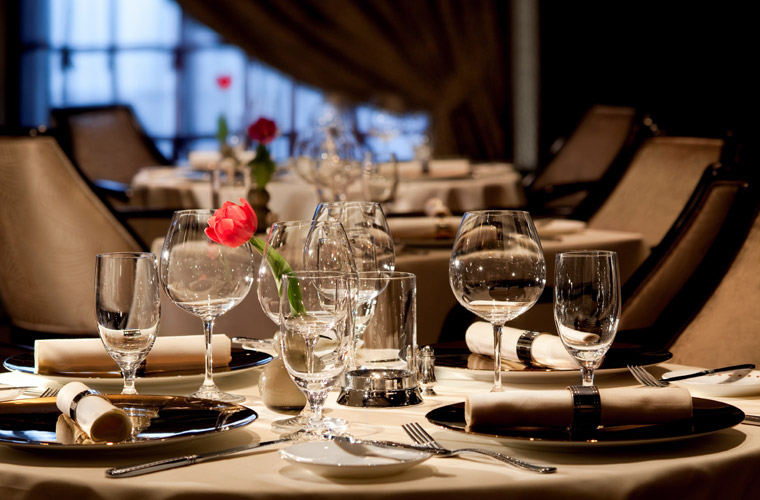 For the best French cuisine outside of France itself, head to Murano – a classic French-inspired restaurant that really takes continental cuisine to the next level. As well as an a la carte menu, which features both a caviar and a cheese course, there’s also the set ‘Five Senses’ menu, which offers six courses designed specifically to stimulate all your senses, from aromatic cheeses which smell truly amazing to beautiful truffle foams, which look more like works of art than food. Expect dishes such as smoked salmon parfait, five spice venison loin and grand marnier souffle, along with artisanal cheeses, sevruga caviar, and, of course, a wine menu that complements your meal perfectly. Murano features on Celebrity Eclipse, Solstice, Century, Silhouette, Equinox, and Reflection, so there are plenty of opportunities to give it a try. 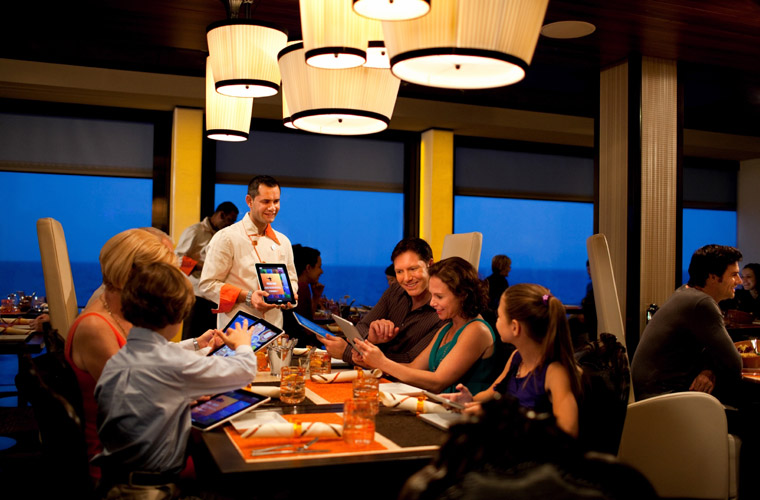 Even self-confessed ‘foodies’ who have scoured the globe looking for the most unique offerings have to admit that they’ve never enjoyed a dining experience like Qsine. This venue, which features on Celebrity Cruises’ Eclipse, Infinity, Silhouette, Summit, Millennium, and Reflection ships, combines great tasting food with not only outstanding presentation, but also a futuristic overall dining experience. In terms of the food itself, passengers can expect everything from your classic tapas offerings such as mixed olives, falafel, and hummus, along with more unusual combinations including carrot and cardamom, sweet potatoes and raisins, and vodka-marinated salmon. What makes Qsine so out-of-this-world, however, are the iPad menus, which take ordering to a whole new level! 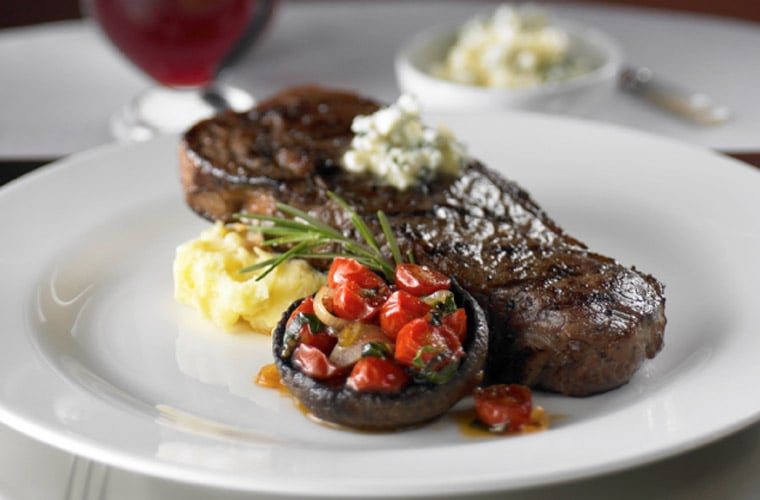 Chops Grille may well be one of the oldest specialty restaurants of the Royal Caribbean fleet, but it remains one of the most popular, offering up high end American-style steakhouse fare on all Oasis, Radiance and Freedom Class Ships, and it’s even been added to Mariner of the Seas, Enchantment of the Seas, Navigator of the Seas, and Splendour of the Seas in recent years due to high demand. Walking into Chops Grille, you’d think you were at a real all-American steakhouse, with dark wood furnishings, a laid-back atmosphere, and, of course, a menu that’s bursting with different cuts of beef, pork and lamb. If you’re travelling in a group, Chops Grille is one of the best places to dine – the appetisers are all served to perfection, which means big portions for sharing around the table. Steaks are served however you prefer, right from rare to well done, so you can be sure your steak will be just how you like it. 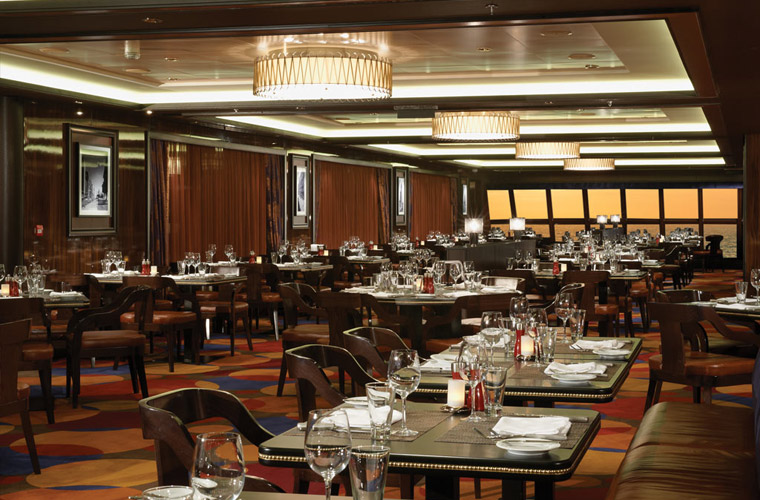 Cagney’s Steakhouse is a little different to other speciality restaurants at sea – rather than being an ‘added extra’, passengers actually opt to cruise with Norwegian Cruise Line specifically for this dining experience. Yes, it’s THAT good. Cagney’s is an American-style steakhouse where there’s no such word as ‘small’. Expect steaks that hang off the sides of your plate and side dishes that are more than big enough to share. So what makes this restaurant so good that people keep coming back for more? It’s the little twists that make this type of cuisine completely unique. Have you ever had rib confit with smoked bell pepper dip? How about Mexican-inspired Caesar Salad? Or grilled sea bass topped with champagne foam? And don’t forget the signature dish – the truffle fries – they’re to die for! 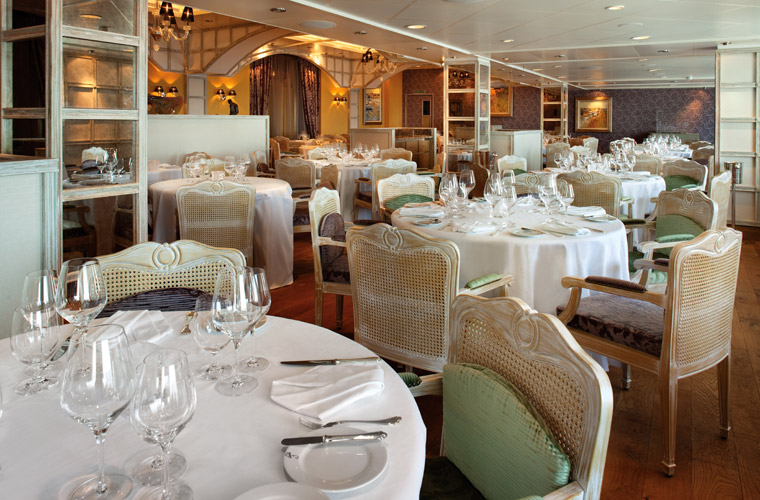 Jacques Pepin, former personal chef to Charles de Gaulle, now oversees the superb variety of restaurants on board the luxury vessels of Oceania Cruises, but on the Marina and Riviera ships (the cruise lines latest additions to the fleet) you’ll find something very special indeed – Jacques’ very own restaurants. Believe it or not for such a renowned chef, these are the very first restaurants to bear the Jacques Pepin name, not just at sea, but anywhere in the world. The cuisine is, of course, traditionally French, with many specific Parisian influences – a nod to Pepin’s training at the luxurious Plaza Athenee hotel in the French capital. Prime Rib coated in fragrant Herbs de Provence, gratin dauphinois, and decadent mille feuille are just some of the delights you can experience here at Jacques. 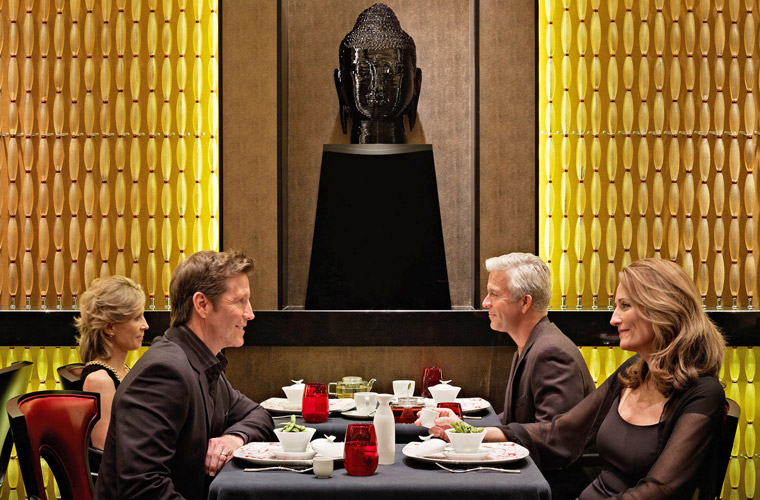 Jacques isn’t the only noteworthy dining experience aboard Oceania’s Marina and Riviera ships – Red Ginger, with it’s Asian-inspired menu, is also very highly acclaimed, and it’s addition to the luxury Oceania Cruises fleet has been truly welcomed. Along with a menu that will transport you to the Far East, a great amount of detail and attention has been put into the furnishings and decor, with red hues that symbolise luck, wealth and love in many Asian cultures. What passengers will find at Red Ginger is a menu that’s truly diverse, and trying to categorise it as being one cuisine or another is very difficult. A sample menu, for example, may include Vietnamese summer rolls, with sliced vegetables and noodles wrapped tightly in rice papers, Japanese tuna tataki with a spicy wasabi sauce, and Malaysian beef penaeng with its nutty texture and rich sauce. This is a place that really does awaken the taste buds!

While we admit that we do love the tradition of the main dining rooms at sea, with so many exciting new dining innovations appearing before our eyes, it’s hard to say no to these restaurants. On your next sailing, why not try something different? We guarantee you won’t be sorry!

Categories: Food and dining on cruises