Home Blog Cruise destinations Top 5 Things To Do In Venice

Top 5 Things To Do In Venice 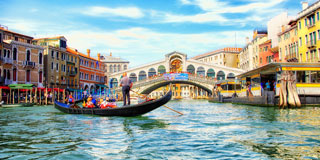 Think Paris is the most romantic destination in the world? Think again! While the French capital offers impressive sculptures, fascinating history, and mouthwatering cuisine, Venice goes one step further, bringing in some of the world’s most spectacular bridges, narrow and mesmerizing canals, and some of the finest examples of gothic architecture you’ll see anywhere on the planet. If you’ve haven’t stepped foot on one of the 117 Venetian islands before, then what are you waiting for? Not only is the city well placed for cruise ships sailing from Southampton, but it’s also recently become a popular embarkation point, with P&O Cruises offering a number of amazing Mediterranean fly cruises from this beautiful Italian port alongside many other popular cruise lines such as Cunard Line and Celebrity Cruises.

One of the great aspects about Venice as a port is that the city is made up of a maze of waterways, which means cruise ships – even the largest vessels – can dock just a short distance away from the main sights and attractions. From the main cruise terminal – the Venezia Terminal – it’s just a two mile walk, or a 10 minute drive, to St Mark’s Square which is often used as a starting point for many citywide tours. Due to the port’s proximity to Venice’s most famous sights, it’s very easy to see the city on your own if you wish, although each cruise line still offers a wide range of guided excursions which help you to maximise your time in this wonderful Italian destination.

If you’ve ever chatted with friends or family who have visited before, you’ll probably notice that no one has a bad word to say about the city, and that’s because it’s diverse enough to appeal to all kinds of traveller, whether they’re looking for an energetic and exhilarating trip, something cultural, or even a relaxed and laid back day simply enjoying the sights. It’s very clichéd to say there’s something for everyone, but this is certainly one city where you can tailor your experience to suit your needs. While Venice is known for its romantic atmosphere, there are plenty of options for solo cruisers and unlimited attractions to keep the little ones busy – the hard part is figuring out how to fit it all in! 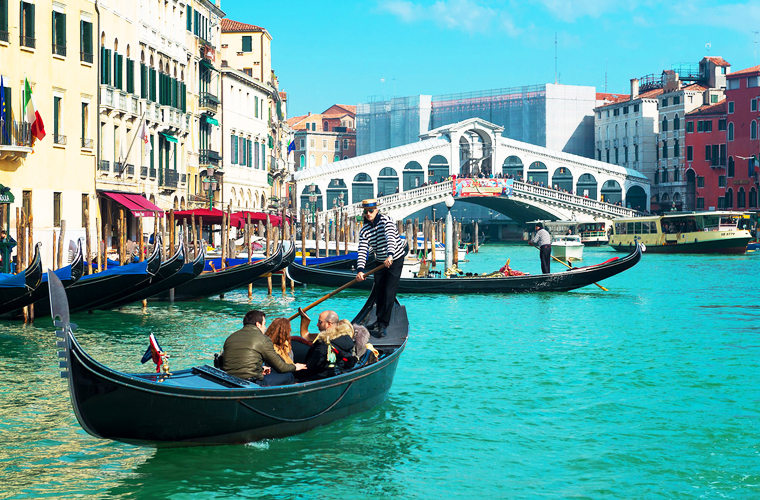 Gondolas are to Venice what the taxicab is to New York – it’s one of the easiest and most convenient ways to get around in a city that’s made up of a whopping 177 canals. If you only do one thing in Venice, it should be taking a gondola ride. You’ll typically find that you’ve got two choices here – a daytime trip down the Grand Canal, or an evening sail through the backstreets of the city – both are very different, yet equally alluring. The world renowned Grand Canal is synonymous with the city and extremely beautiful.  Your gondolier will provide interesting facts and information about the 16th century buildings you’re passing by. There’s plenty of opportunities for people watching as you navigate the waterways which flow through the busy, bustling streets of central Venice. However, there is, perhaps, nothing more romantic than sailing through the quiet backstreets of the city just as the sun is setting. You may even have a local musician accompany you to really add to the atmosphere. A good suggestion is to jump in a gondola just outside Doge’s Palace – from here, the route will take you underneath the Bridge of Sighs. Kiss underneath and you’ll be granted eternal love, according to local legend. 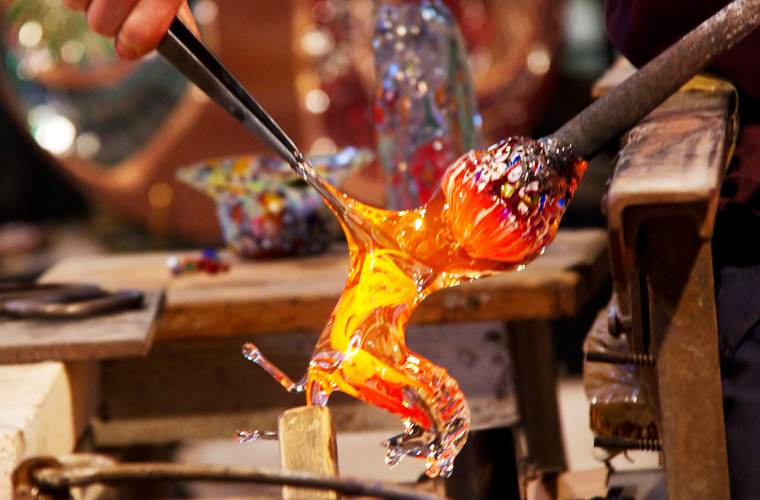 You can find Murano glass for sale all over Venice – it’s one of the top souvenirs to take home from your trip – but it’s well worth taking the short ferry ride to the island of Murano to see these amazing glass chandeliers, paperweights and figurines being made by Italians who employ the exact same methods of glassblowing as they did in the 7th century. The ferry ride to Murano is an excellent way to see more of the Venetian islands away from the main tourist areas, but make sure to take a jacket as it can be a little breezy. Murano itself is a beautiful island, and with many excursions you’ll usually be given between 30 minutes and one hour to explore by yourself, which gives you plenty of time to take some photographs, visit some local shops, or grab some lunch. However, the highlight is, of course, a visit to one of Murano’s many glass factories. Having honed their skills perfectly, the glass blowers make it look easy, but there’s actually a lot of work that goes into creating the perfect glass figurine. A handy hint is to not pack too much jewellery for your formal nights on board if you’re making a stop in Venice as you’ll be able to pick up some unique pieces from the shops on Murano. 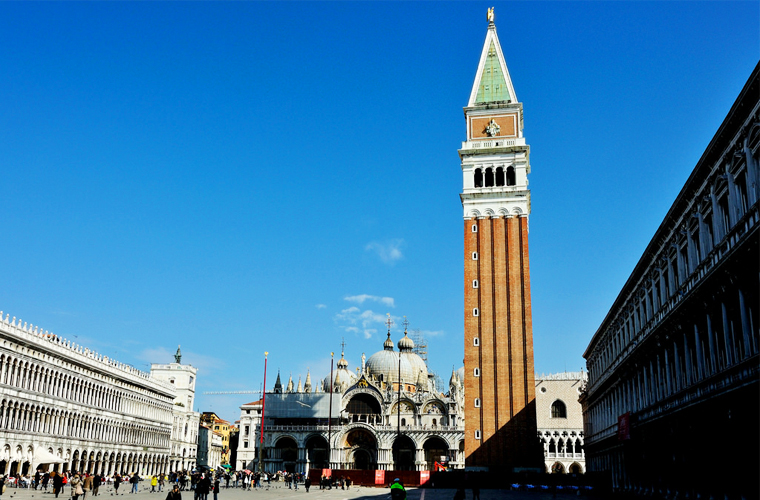 3. Marvel at the Beauty of St Mark’s Square

Piazza San Marco, or St Mark’s Square to us Brits, is the central hub of Venice. Wherever you are in the city, it’s always easy to find your way back to this stunning piazza, which is why it’s a popular starting point for many excursions and tours. Despite the large open space that’s surrounded by some of Venice’s most well-known sights and attractions, including St Mark’s Basilica, Doge’s Palace and the Campanile, this square is almost always bustling, and if you can grab a seat outside one of the restaurants or coffee shops, you could spend all day watching the locals and travellers making their way from one attraction to another. If you’re cruise includes an overnight in Venice, it’s well worth trying to visit the square either early in the morning, or late at night – it’s a completely different experience, and one that’s truly unforgettable. While you’re here, don’t forget to look up and pay attention to the minute details of the buildings. Look close enough and you’ll see a statue of St Theodore – the first patron saint of Venice, the Lion of Venice – a symbol of the city, and the beautiful Pillars of Acre. 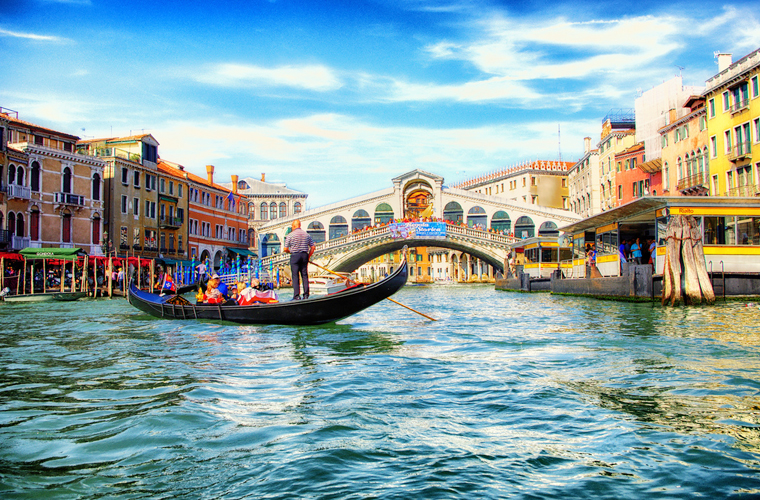 The Rialto Bridge has to be the most recognisable sight in all of Venice, and it’s certainly a symbol of Italy. Love or hate architecture, no traveller can deny that this is one of the most beautiful bridges in the world. Not only is the Rialto Bridge famous for being one of just four bridges that cross the Grand Canal, but it’s also the oldest and really is an inspirational sight. The bridge you’ll today dates from the 16th century, but there has been a canal crossing in that exact spot since the 12th century – a necessity to make it easy for Venetians to reach the popular Rialto market, which is still in operation today. The market itself is well worth a look especially if you enjoy fresh fish. Taking your camera is a must. Not only is the bridge itself very photogenic, with its covered roof, its two sets of stairs, and its tiny boutiques and street vendors lining its sides, but this location is also considered to be one of the best places to photograph the city. The Rialto Bridge forms the border between the San Marco and San Polo districts of Venice, both of which are very different, and from the bridge you’ll have the opportunity to view both areas at the same time – quite a breathtaking sight. 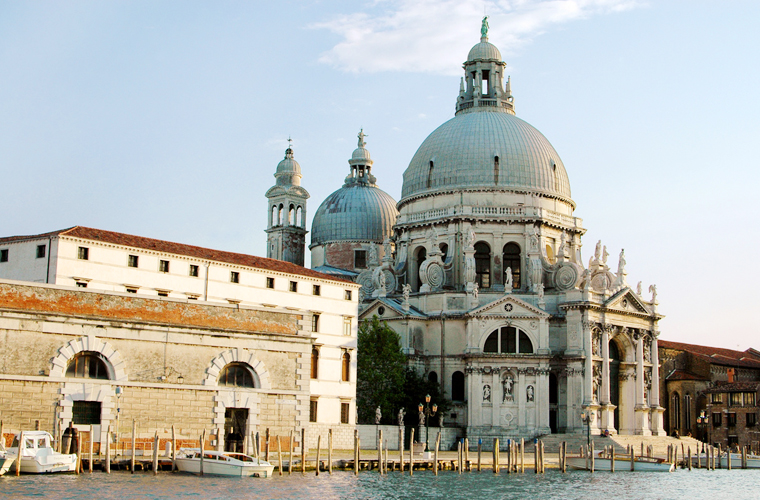 San Marco is the main district of Venice – it contains St Mark’s Square, the Bell Tower, and some of the city’s finest museums – so it’s only natural that travellers flock to San Marco when they’re in Venice. However, cross the Rialto Bridge into the San Polo district and you’ll see a completely different side to the city. San Polo is much more of a local’s area, where you’ll have a chance to discover the ‘real’ Venice away from the tourist-oriented shops and stalls. It’s much quieter here – great for if you’re looking for a more relaxing trip – and the sights are simply beautiful. It’s here you’ll find Campo San Polo – the second largest square in Venice after St Mark’s Square, and this is one of the highlights of San Polo. The Church of Santa Maria is one of the city’s biggest churches, and while the exterior may not have that same romantic, gothic style that you’ll see in San Marco, it’s nothing short of magnificent. Historically, the square was used for bullfights and religious sermons, but today hosts some of Italy’s biggest and most exciting carnivals.

Narrowing down Venice’s main attractions to just 5 is hard work! We’ve not even mentioned grabbing a gelato, taking a trip to the island of Burano (known for its pretty streets and lace production), or sailing through the heart of the Venice Lagoon. Fortunately, with P&O Cruises’ new Mediterranean fly cruises from Venice; guests are being given opportunities to spend even more time in the city, having the chance to immerse oneself in all the city has to offer. This is one city where a single day is just not enough!