Home Blog Entertainment & activities What Has Changed On Board P&O Cruises’ Ventura?

What Has Changed On Board P&O Cruises’ Ventura? 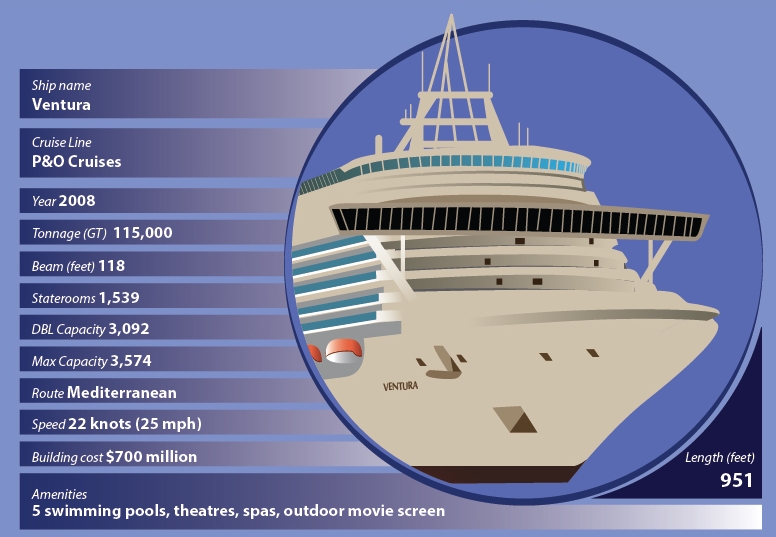 When P&O Cruises’ Ventura was launched in 2008, she was considered the epitome of the fleet, with everything passengers could ever want from a cruise ship. However, in the last few years, the cruise industry has gone through some major changes, with many cruise lines adding additional features and amenities in order to make cruising more attractive to a wider range of travellers.

Suddenly, Ventura was starting to look a little dated, and following in depth passenger research P&O decided to refurbish the ship to meet passengers demand and respond to feedback. Taking inspiration from Ventura’s sister ship, Azura, passengers can now sail the world on board a modern, contemporary and grand ship. The refurbishment was completed on 6 April 2013; in plenty of time for Ventura’s role as the go-to ship for P&O Cruise’s new range of Mediterranean fly cruises starting this summer.  See all P&O Ventura Fly-Med itineraries here.

The Importance of Dining

At the time of the refurbishment announcement, Ventura’s dining options, although diverse, were not considered as appealing as other ships in the fleet, especially in comparison to Azura. Azura was highly regarded in this area within the cruise industry, so P&O made the decision to incorporate some Azura favourites into the new Ventura. P&O’s Managing Director at the time, Carol Marlow, cited passenger research as the deciding factor in improving the drinking and dining establishments on board. According to their studies, 97 percent of passengers valued high quality dining establishments at sea, so combining classic cuisine with a contemporary twist seemed like the perfect solution to appeal to the modern day traveller.

Two major dining changes were made to Ventura during the refurbishment. Firstly, the speciality dining restaurant, East, had a complete menu makeover with the help of celebrity chef Atul Kochhar. As the first Indian-born chef to receive a prestigious Michelin star, Kochhar is considered to be Britain’s most skilled and creative chef specialising in Asian cuisine. The new menu is described as ‘Asian fusion’, offering a blend of Thai, Vietnamese, and Japanese dishes.

The second change was the introduction of the Glasshouse which replaced the Las Ramblas Bar. The creation of wine connoisseur Olly Smith, the Glasshouse was already a popular venue on board Azura. The Glasshouse had become famous on Azura due to its charismatic décor and ambiance but most of all for its flexibility, which is something modern cruise passengers are looking for. Guests can opt to sample wines by the glass, rather than by the bottle, and small, sample, tapas-like dishes are served which are all designed specifically to compliment Smith’s wine selections. 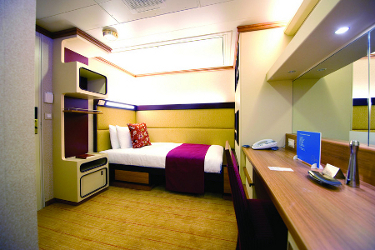 All staterooms on board Ventura were given a makeover during the refurbishment, stripping them of their dated features and replacing them with new carpets and curtains, providing a more up-to-date look. However, the biggest change in terms of stateroom was the inclusion of 18 new solo cabins – 12 outside cabins, and 6 inside cabins. Solo cruise travel is a concept that has really taken off in the last few years, yet many cruise ships are not equipped to accommodate those travelling alone. In fact, many cruise lines often charge solo travellers double the fare for single occupancy which discriminates against what is fast becoming a major demographic for cruise companies to target. P&O’s decision to include single cabins puts them well ahead of the curve. They are providing a cost effective way for single passengers to see the world, making them one of the best cruise lines operating in the UK for those wishing to travel by themselves.

As cruise travel is now appealing greatly to young couples and families, many cruise lines are incorporating exhilarating activities on board such as zip lines and surfing simulators. However, P&O, despite boasting modern innovations of their own, remain a very classic, traditional cruise line at heart.  While P&O ships do cater for those seeking adventure, the cruise line also recognises the need to provide intimate, opulent, and luxurious settings, which bring in the traditional aspects of the golden age of sea travel. One way P&O have done this with Ventura is by expanding the on board spa services, and introducing ‘The Retreat’ – an outdoor spa area exclusively for adults. The Retreat is a quiet, relaxing place to sit, unwind and enjoy the views, the sun, and the peaceful atmosphere. P&O are also keen to let passengers know that The Retreat isn’t just for use in the nice weather. Even on colder days, deck heaters mean you can enjoy the warm Mediterranean heats, even when the sun isn’t shining! 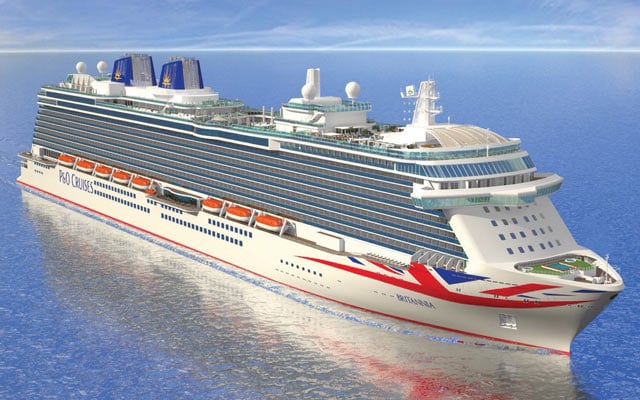 The refurbishment has made Ventura one of P&O’s most contemporary and luxurious ships, proving to be one of the most popular in the entire fleet. Of course when the highly anticipated Britannia is launched in 2015, she will become the cruise line’s biggest ship and the largest ever designed specifically for the British market. Britannia’s interior design is sure to excite and P&O Cruises took the decision to bring Ventura in line and refresh her features. Despite Britannia’s arrival, we highly expect Ventura and Azura to remain treasured ships within the P&O Cruises fleet.  Both ships abilities to combine smaller, more intimate and timelessness features with exciting, innovative and contemporary facilities maintains their positions as leading cruise ships in the industry.

You can keep up to date with Ventura’s progress as well as passenger feedback to her new features at our cruise reviews page by clicking here.

You can also follow the development of P&O Cruise’s new ship, Britannia as we bring you all the news, images, videos and updates in the run up to her grand unveiling.  Click here to see our dedicated Britannia site.