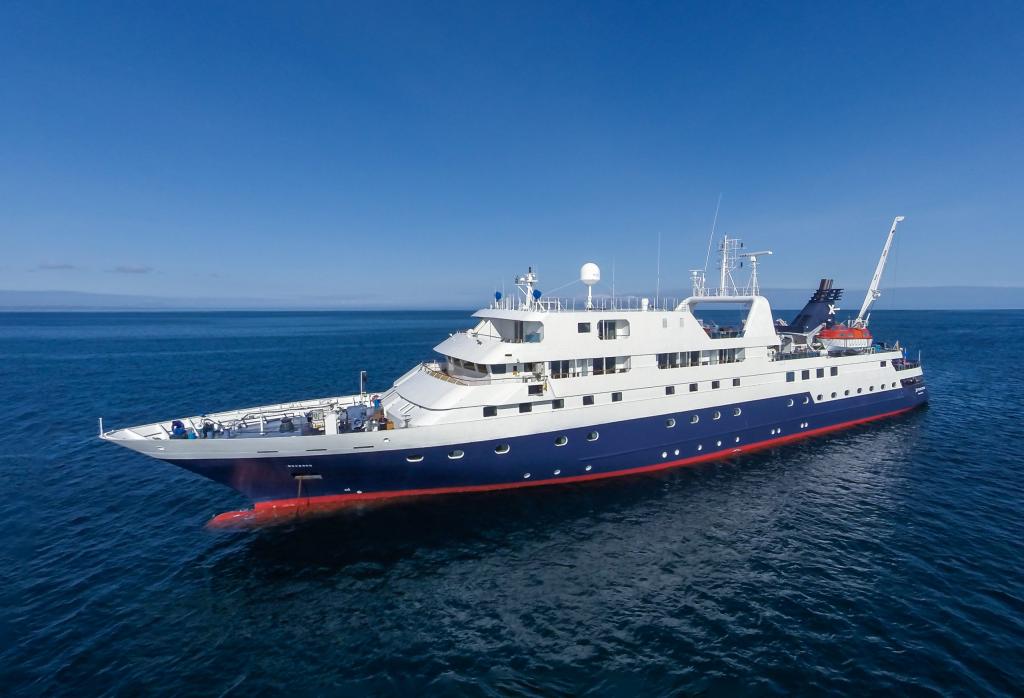 During World War II, Baltra served as a U.S. military base protecting the Panama Canal from enemy attack. Now the cactus-strewn landscapes of Baltra are home to the region’s main airport and where you will meet the ship. After just a short bus and zodiac ride you will be aboard. Your luggage will be delivered straight to your stateroom, giving you the opportunity to explore the Celebrity Xpedition, a 296-foot mega-yacht and your home for the week.

Located in the center of the Galapagos archipelago, Santa Cruz Island, or Isla Santa Cruz as known by the locals, is the second largest island in the chain, after Isabela. The capital of the island is Puerto Ayora, which is the most populated urban center in the Galapagos Islands as well as the largest port town. The island itself is the most populated in the Galapagos, with 12,000 residents scattered throughout small villages. The island is a large, dormant volcano which it is estimated hasn’t been active in over a million years. As a testament to the volcano’s previous activity, there is a giant lava tunnel over 6,500 feet long that tourists can walk through.The highlands of Puerto Ayora offer are filled with a variety of trees and plants such as scalesia trees, cat’s claws, and Galapagos miconia. The highlands are also home to land tortoises that roam free in search of food and shallow ponds.

There are also two large holes on the island named Los Gemelos or “The Twins,” which were caused as the result of the collapse of a magma chamber. Tortuga Bay can be found on the island, a pristine spot to observe marine iguanas, birds, Galapagos crabs, and a natural mangrove in which white-tipped reef sharks and the Galapagos tortoise can be found. Speaking of the giant tortoise, the Charles Darwin Research Station is located here, where they have implemented a breeding program for these endangered giants. This research station is the operational hub for the international non-profit Charles Darwin Foundation, and crucial research as well as environmental education are performed here. Santa Cruz is the main tourism hub for all of the Galapagos Islands and contains the longest paved road in the Galapagos, which runs across the island north-south. Indulge in the pristine white sand beaches of Las Bachas on the northern coast. Explore Black Turtle Cove by zodiac, and wonder at the impressive iguana population on Dragon Hill. It is on Isla Santa Cruz that tourists can really experience the interior and higher elevations of a Galapagos Island, as the elevation rises to a breathtaking height of 2,835 feet.

The landscapes of this small island are visually stunning. It’s the top of an old volcanic cone bathed in crimson. The rocks and sand are hued brilliant red and sit amid coves of clear aqua blue water. A short hike up a steep hill provides for several spectacular overlooks, while you search the high cactus for finches and other birds. A Zodiac ride along the coast is also an option, as guests look for sea lions, fur seals, and birds. A brackish lagoon just behind the landing site sometimes provides an extraordinary opportunity?to get up close and personal with flamingos—a photographer’s dream, when it happens. A swim off the beach or snorkel along the shore afterwards is just the way to end the day.

Fernandina is the youngest island in the Galapagos and,as Darwin wrote, it is “covered with immense delugesof black naked lava.” Along with its extraordinary blacklava rocks, this point of land hosts the largest colony ofmarine iguanas in the Archipelago, along with sea lionsand a nesting site for flightless cormorants.

Due to currents and upwelling, the water here is noticeably colder than in other parts of the Galapagos and in 1954, part of this area along Isabela’s coast was uplifted 12–15 feet just prior to an eruption. The remains of a coral reef raised during the uplift can still be found at Urvina Bay. On a long hike, you can ramble through the now high-and-dry corals of this once thriving reef or stick to a shorter version of the same hike and look for land iguanas, finches, and if luck holds, giant tortoises. Afterwards, if conditions allow, the black sand beach of Urvina Bay offers a chance for swimming and snorkeling. While in the water, you may see sea turtles and diving cormorants.

About one million years ago, six volcanoes (five of which are still active) coalesced to form seahorse-shaped Isabela, the largest of the Galapagos Islands. At 1,790 square miles, it’s larger than all of the other islands combined, and, because it’s located on the western edge of the archipelago near the Galápagos hotspot, it’s one the world’s most volcanically active places. While many of the Galapagos islands are home to wildlife only, Isabela had a robust population of 1,749 in the 2006 census. From Tagus Cove on the northwestern side (which sheltered whalers, pirates, and buccaneers in days of old) to the laid-back resort town of Puerto Villamil at its southern tip, the island offers visitors a dazzling variety of terrains, wildlife and experiences. The Cromwell Current hits the base of Isabela’s west coast, causing nutrient-rich water to up well creating the perfect feeding environment for ground for fish, whales, dolphins, and birds. Because 16 species of whales have been identified in the area (including humpbacks, sperms, sei, minkes and orcas), it’s regarded as the best place to see whales in the Galapagos. As is often the case in the region, animal species abound. Visitors can hope to see penguins, cormorants, marine iguanas, boobies, pelicans, Sally Lightfoot crabs, Galápagos land iguanas, Darwin’s finches, Galápagos hawks, and Galápagos doves. There are many and varied ways to encounter wildlife on Isabela: at Moreno Point, near Elizabeth Bay on the west coast, visitors traverse a lava path to find pools at which a wide variety of birds feed. Vicente Roca Point offers some of the most dramatic landscapes in the Galapagos and the opportunity to see the remains of Ecuador Volcano

We’ve taken a page out of Darwin’s Red Notebook and learned that to be relevant—to keep up with the times—we have to evolve to fit perfectly into the ever-changing world around us. More specifically, the environment around us. With 10 years in the Galapagos, we’ve learned and evolved our vacations to meet the needs of the modern explorer. We’ve adapted to bring you updated luxuries that elevate your experience in this precious archipelago to the next level. The way we see it, the Galapagos Islands may be primitive, but your vacation there doesn’t have to be.

A beautiful white sand beach on the northern coast of Santa Cruz Island. The name “Las Bachas” comes from the mispronunciation of the word “barges” by the local population during the 1950s when WWII barges broke their moorings and ran aground on the beach. This is also one of the largest nesting areas of the Pacific Green Sea Turtle in the Galapagos. A short beach walk brings you to a pond to look for flamingos and other shorebirds. Afterwards, this is a fantastic beach to relax, go for a walk, swim, and maybe practice snorkeling.

The cliff shore of the island is home for sea lions, pelicans, blue footed boobies and tropic bird. In addition, large schools of fish can be observed from the zodiac rides.

Named after the birthplace of legendary explorer Christopher Columbus, Genovesa Island is a Galapagos Island crown jewel. This horseshoe-shaped island is also known for its diverse population of birds and distinct shape. Those characteristics are where Genovesa draws its two nicknames from: Bird Island and Tower Island. And you’ll likely notice both as you step off your zodiac.

You’ll walk up the same rocky path Prince Phillips did when he visited the Galapagos Islands in 1965 and 1981. As you scale the cliffs, you’ll make your first encounter with the colonies of colorful seabird. You’ll disperse into the thin Palo Santo forest where your path inland is a birdwatcher’s dream. Flocks upon flocks of birds nesting in their natural habitats. Swallow-tailed Gulls. Red-footed Boobies. Nazca Boobies. Blue-footed Boobies. Storm Petrels. Galapagos Mockingbirds. Galapagos Doves. Great Frigate Birds. Lava Gulls. Fiddler Crabs. And that’s not all.

If you love eclectic cuisine, Darwin, which sits at the top of the Northern Territories and is therefore at the crossroads of so many cultures, will not disappoint. Sample everything from crocodile and barramundi to mud crabs and buffalo. Once you’ve had your fill of culinary adventures, saunter into the street and watch musicians and performers show off traditional Aboriginal culture.

Santa Cruz is the second-largest island in the Galapagos and home to Puerto Ayora (the largest town in the islands). In 1959, the Ecuadorian government declared all the islands, except areas already colonized, as a national park. In the same year, the Charles Darwin Foundation was founded to promote scientific research and ensure the conservation of the Galapagos. In 1992, the waters surrounding the Galapagos were declared a marine reserve. Here, you have the opportunity to visit a giant tortoise reserve in the lushly vegetated highlands, where the animals roam free in their natural habitat. On another excursion, a short drive through town brings you to the Galapagos Park Service giant tortoise breeding station and the Charles Darwin Research Station. Afterwards there is time to wander through the lovely streets of Puerto Ayora for some shopping.

During World War II, Baltra served as a U.S. military base protecting the Panama Canal from enemy attack. Now the cactus-strewn landscapes of Baltra are home to the region’s main airport and where you will meet the ship. After just a short bus and zodiac ride you will be aboard. Your luggage will be delivered straight to your stateroom, giving you the opportunity to explore the Celebrity Xpedition, a 296-foot mega-yacht and your home for the week.