A cruise to the Norwegian Fjords steals the crown when it comes to spectacular scenery, thanks to an expanse of inky blue waters, edged with snow-capped mountains, thunderous waterfalls and picture-perfect wooden towns scattered amidst the surrounding greenery. There is no finer way to explore the fjords than to sail through them, your ship dwarfed by the imposing cliff-faces that rise around and before you. 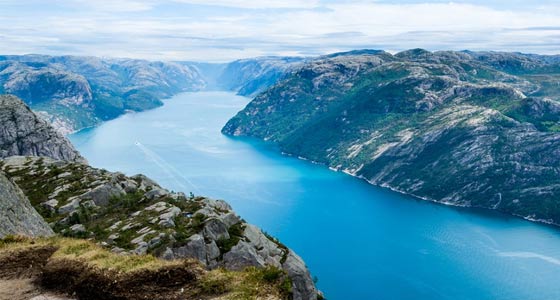 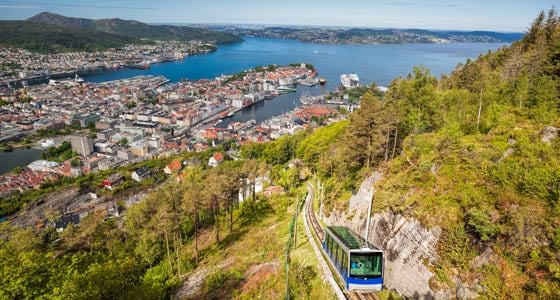 View of Bergen city with lift in Norway 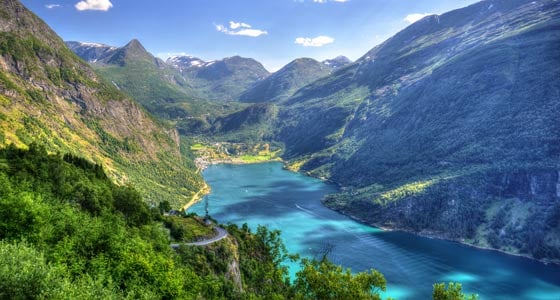 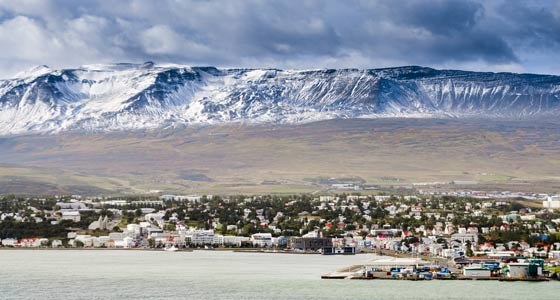 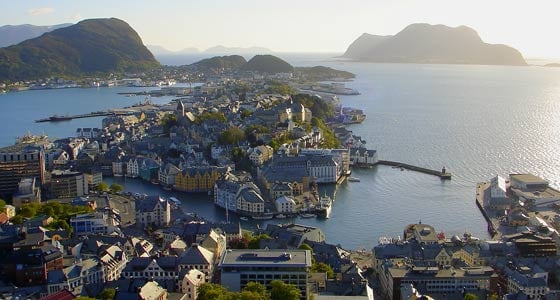 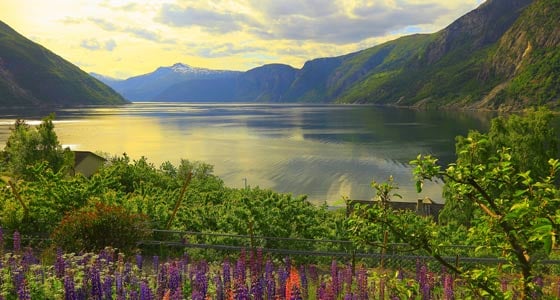 Eidfjord - fjord and lupines at sunset 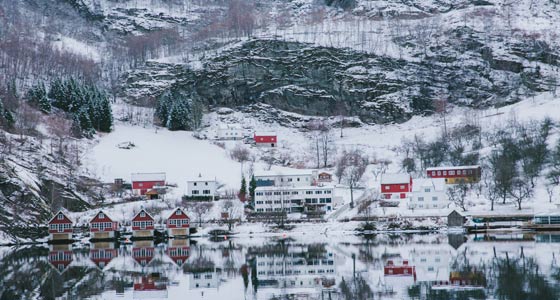 Flåm in the Winter 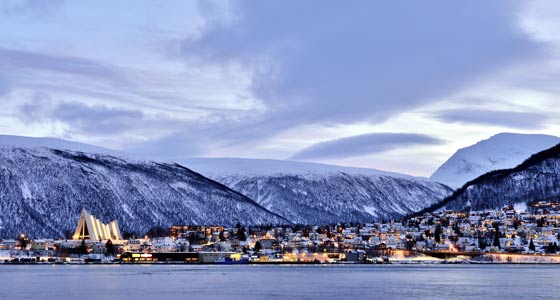 View of Tromso Cityscape at Dawn 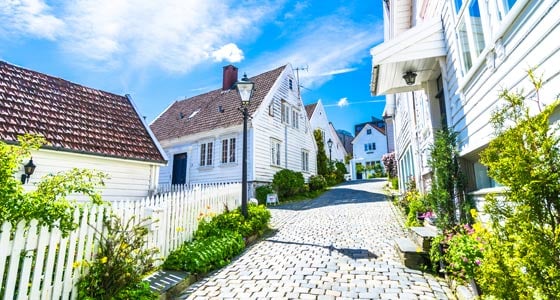 Venture further north and you’ll break into the Arctic Circle, a place renowned for the Northern Lights that dance across the skies and reflect in the icy waters. The tip of the world is within touching distance this far north, your North Cape ports of call an escape from the ordinary and an adventure in the greatest sense of the word.

Seven fjords and seven mountains surround Bergen, Norway’s second largest city, making for an impressive view from the summit of Mt. Floyen, which is reachable via Scandinavia’s only funicular railway, the Fløibanen. Back down at sea level sits UNESCO World Heritage Listed Bryggen, a wooden city comprising the last surviving buildings of the 13th century Hanseatic League. Rebuilt after the Great Fire of 1702, this maze of narrow alleyways, overhanging galleries and quaint wooden buildings sits at the heart of medieval Bergen.

For many, Bergen’s appeal lies in its close proximity to the spectacular Sognefjord, with boat tours departing from the city on a daily basis, bound for Norway’s largest and the world’s longest and most famous fjord. Those in search of the equally photographed Trolltunga cliffs should embark on a tour of Hardanger, home to the famous rock ledge that perilously juts out 2,300ft above Lake Ringedalsvatnet.

Nicknamed ‘Gateway to the Arctic’, thanks to its position less than 250
miles from the Arctic Circle, the city of Tromsø demonstrates everything that is great about Norway, its people and its culture. Many venture here in search of the majestic Northern Lights, a phenomenon best witnessed from the serene shoreline of Telegrafbukta Beach, located a scenic 30 minute walk away from the centre of Tromsø. The season of the aurora borealis also brings with it the whale watchers, bound for the aptly named Whale Island (Kvaløya) between the months of November and January, their eyes peeled for all but guaranteed sightings of humpbacks, orcas, fin whales and harbor porpoises, plus an odd white eagle or seal thrown in for good measure. Other boat trips from Tromsø will take you to some of Norway’s most impressive fjords, including the pretty Erdsfjord and Grotfjord, one of the quietest yet most beautiful of them all.

A cruise to this region appeals just as much to thrill-seekers as to those looking for a more chilled out getaway. Preikestolen, or Pulpit Rock as it’s commonly known, is one of the most exciting places in Europe – and one of the most dangerous! Standing 1,900 feet above the beautiful Lysefjord, this jutting rock commands amazing views across Stavanger. However, to enjoy these views, you need to creep around the rock’s summit which is void of any safety bars or railings. With your heart pumping and face sweating for the sheer adrenaline, you’ll never forget this experience.

Ålesund lies at the heart of the Geirangerfjord and is renowned for its stunning scenic cruising. A port of call on most cruises to the Norwegian Fjords, you’ll notice Ålesund differs slightly to other Norwegian towns. After a devastating fire that destroyed the town in 1904, Ålesund was rebuilt and later became known for its Art Nouveau style. Though the town’s structural design may differ to other nearby ports of call, its epic mountain backdrop remains the same. Hike, explore the fjords, take a rip-roaring rib ride of just embrace the Norwegian notion of ‘hygge’ with coffee and cake in a quirky cafe.

Known as ‘The Town of the Northern Lights’ and home to the world’s first northern lights observatory, Alta is one of the very best places on earth to head in search of that elusive rainbow glow. During the winter months, darkness brings with it the possibility of an appearance by the aforementioned northern lights, whilst summer brings the Midnight Sun, lighting up the land all-day long. Whatever the season, make sure that you fill your time in Alta with outdoor tours, exploration and dog sledding, not forgetting to immerse yourself in the destination’s interesting past by experiencing the Sami culture up close.

Alta offers countless activities for adrenaline junkies too, from hitting the ski slopes to embarking on a snowmobile safari and even ice fishing; local guides taking you through dense woodland to well-known lakesides, whilst regaling you with countless facts along the way.

The ideal excursion option for scenic sightseeing on a Norwegian Fjords cruise revolves around the delectable Hardangerfjord. This brilliant tour, provided by many cruise lines visiting here, gives passengers the chance to enjoy a scenic drive to take in the many sights of Bergen before taking a ferry ride across the fjord to Venjaneset. Hardangerfjord will soon come into view, mountain peaks flanking the beautiful waters, snow-capped and glorious to behold.

Quaint yet charismatic, Eidfjord is a sleepy fishing village that nods to the Norway of old. While worth a visit on its own merit, it is the surrounding attractions that make this port of call so exciting; Eidfjord sits on the edge of Norway’s largest national park and at the gateway to Hardangervidda, the region’s largest mountain plateau

From Viking roots, Stavanger has grown to become one of Norway’s most
visited destinations, thanks in part to its most famous resident, Pulpit Rock. Preikestolen, as the natural attraction is officially known, hangs almost 2,000ft above the magnificent Lysefjord, a sight so spectacular that over 200,000 people complete the arduous hike required to see it each year. The mountain plateau has stood strong for over 10,000 years, having been formed during the Ice Age, receiving the accolade of ‘world’s most breathtaking viewing platform’ countless times since.

Stavanger is a keen photographer’s dream. You’ll dock right beside Gamle Stavanger, the picturesque Old Town and Northern Europe’s best-preserved wooden house settlement. Pretty market stalls, art galleries and craft shops fill the white-washed buildings, with cobblestone pathways and vibrant rose bushes adding a touch of colour to their doorways. When it comes to colour, Øvre Holmegate will paint you a rainbow. Every building on this street, be it a restaurant, café or shop, is painted in a different shade of the spectrum, promising a pleasant stroll amidst a kaleidoscope of colour. 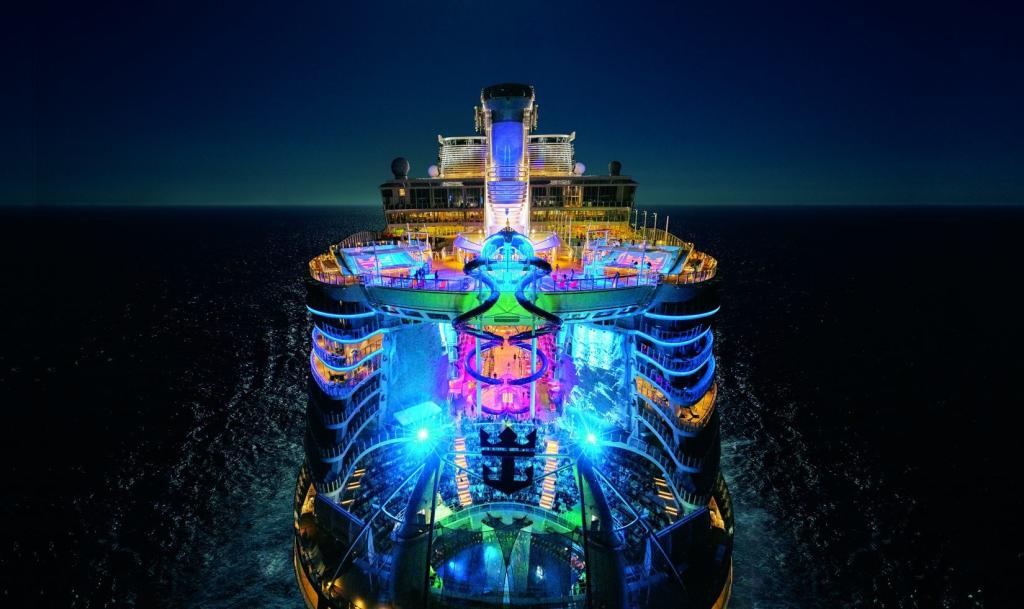 Royal Caribbean is set to bring back priority access programme, 'The Key'. One of the most popular pre-cruise purchase pre-pandemic, 'The Key' offers guests priority… 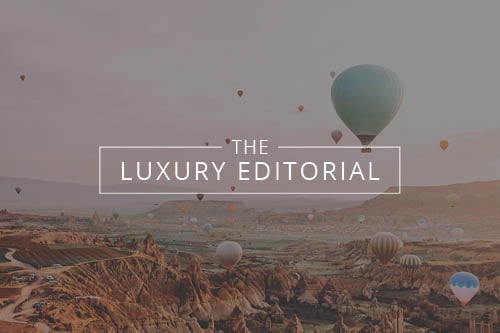 A Standing Ovation: Our Review of Seabourn Ovation

New to cruising and new to Bolsover Cruise Club - our new Marketing Manager, Danny, was invited aboard the ultra-luxury Seabourn Ovation to discover the…