The saying goes that every dog has its day, but what happens when it comes to holiday locations – do particular destinations trend one year and disappear the next? Here at Bolsover Cruise Club, we wanted to find out where the most popular holiday destinations are and analyse whether they’ve changed over the past four years.

To get our results, we used Google search trend data and analysed over 50 different locations to see where the highs and lows were.

Our study aimed to highlight the differences in Google searches for iconic holiday destinations over a four-year period, with the aim of getting some interesting results to determine whether the once ‘go to’ destinations quickly become the ‘has beens’.

With party lovers turning their backs on the famous summer hotspots and tropical islands being more popular than ever before, here’s the holiday highs and lows of 2017:

Unsurprisingly, sun, sea and sangria seems to be top of Brits’ lists when it comes to looking for a city break, with Barcelona being the most searched for destination by UK holidaymakers overall.

The mix of culture, a number of world class music festivals (like Sonar and Primavera) and the gorgeous beach, have seen searches to the Spanish city increase by a whopping 231% in the last four years, positioning the city as the UK’s most desirable holiday destination.

Whilst seafood, paella and Gaudi’s architecture is drawing in the crowds, exotic Bali is also high up on the list, with more searches than ever before being made for holidays to the paradise island. Searches for Bali breaks in 2013 were at just 47,900, compared to 2017 where they rose to 131,000, demonstrating just how in demand holidays are to the beautiful island. 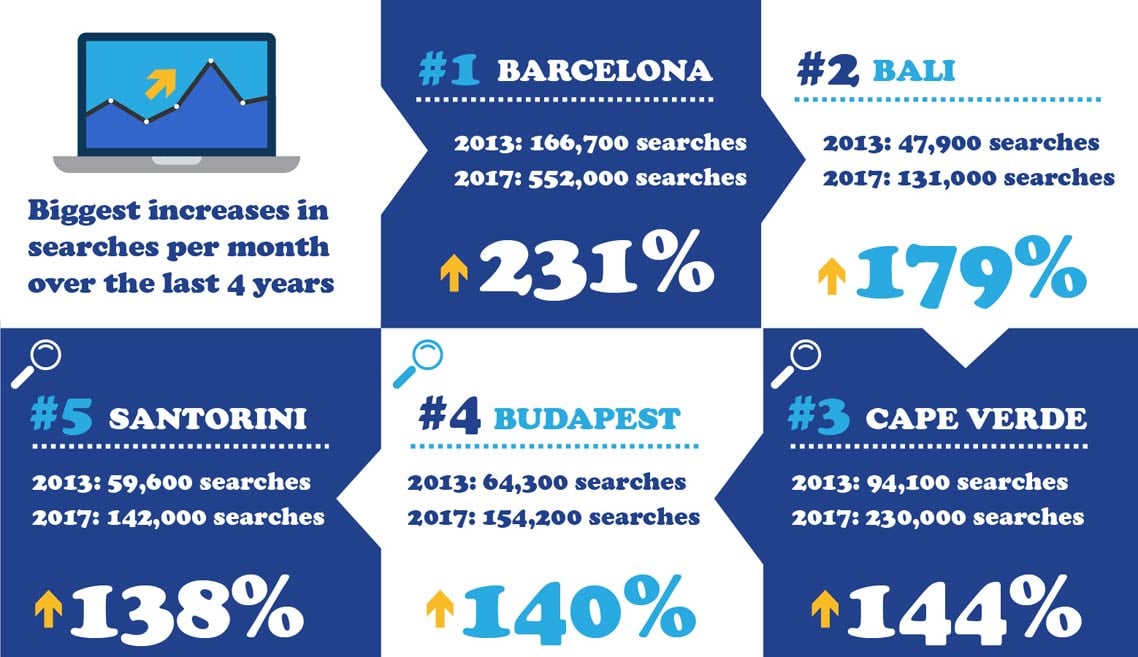 Spain’s most notorious party destination, Magaluf, has suffered a substantial dip in the number of searches and is down by 4% compared to in previous years. This could be due to the tighter restrictions on drinking laws and partying that have been enforced by the Spanish police, making it a less desirable party destination for those wanting a raucous holiday. Amsterdam was the city that saw the biggest decrease in searches out of all the cities polled, with a 15% drop. On the other hand, other European cities such as Dubrovnik, Reykjavik and Budapest have become much more popular.

The US’s favourite party land, Las Vegas, also had one of the smallest increases in searches, with only a 4% increase over the last four years.

We can clearly see that long-haul destinations have become increasingly popular, with places like Cape Verde and Bali becoming much more attractive than closer-to-home holiday destinations.

The beach holiday/city break divide indicated that sipping Piña Coladas on the beach trumps city breaks – beach get-aways had a much higher search volume than their city counterparts. 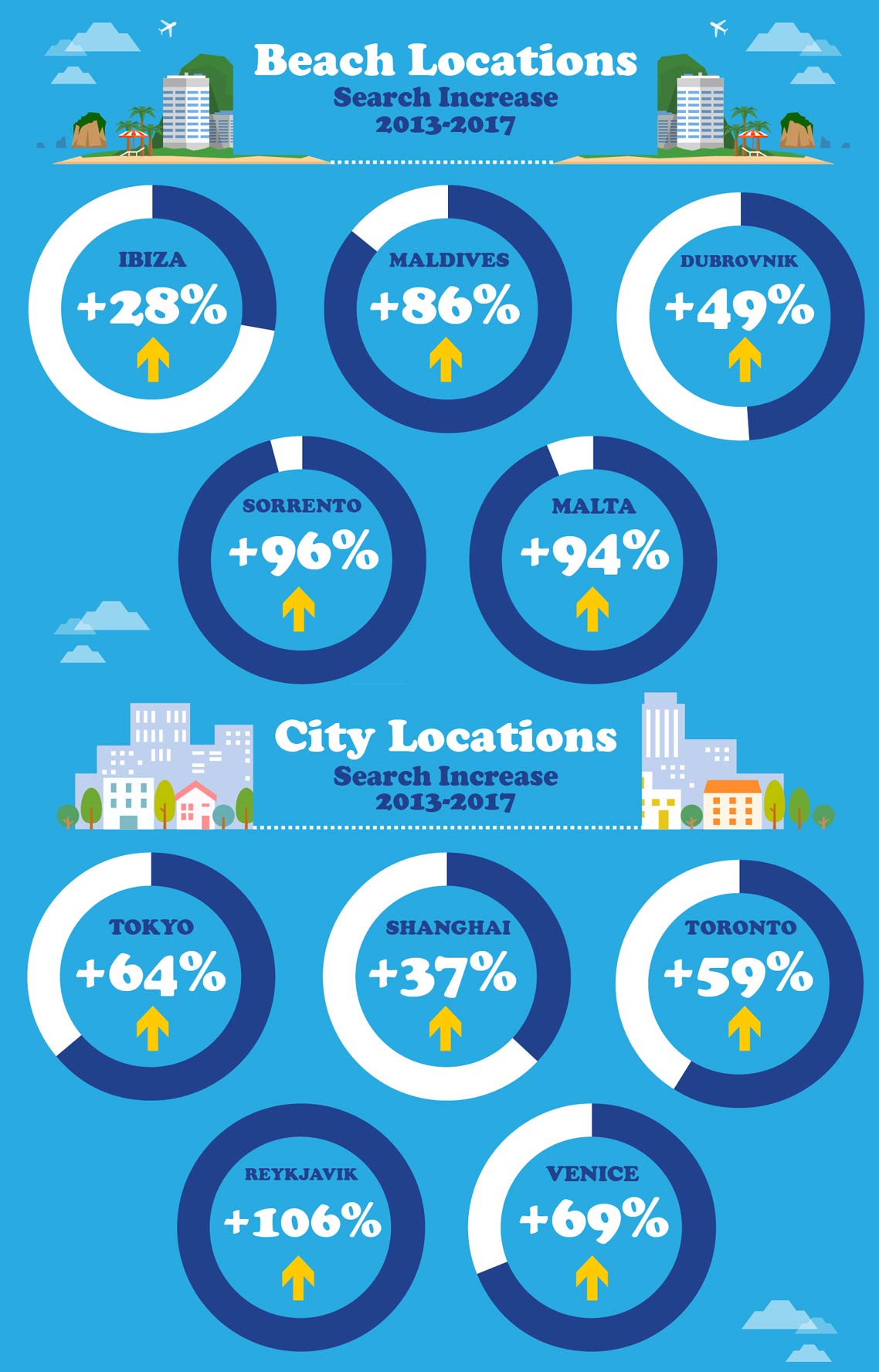 Searches for the picturesque Greek island of Santorini have increased from 59,600 in 2013 to 142,000 in 2017, showing a rapid increase in the number of people wanting to perfect their ‘insta feeds’ with a classic ‘blue sea/white building’ picture.

Where you live in the UK didn’t tend to affect where you’d like to go on holiday either, with Barcelona being the top search for all 5 UK major cities that we surveyed, including London, Manchester, Leeds, Birmingham and Cardiff. 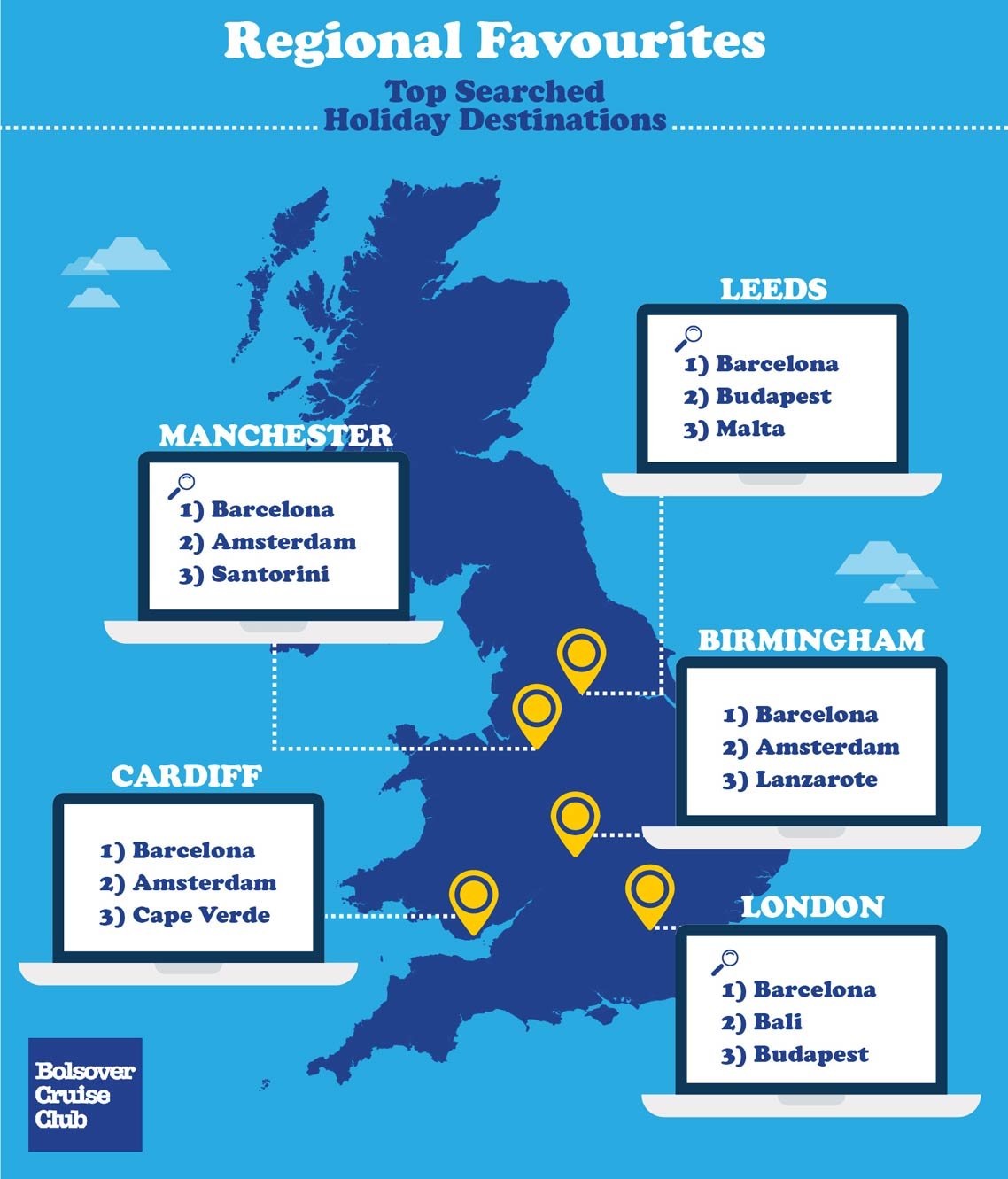 However, Budapest was still popular, coming in the top 5 for three out of the five cities, with searches for holidays to Hungary’s capital having increased by 140% over the last 4 years.

So, if you’re thinking of jetting off this summer, be sure to do your research and see if your favoured destination isn’t considered past its sell by date before booking.