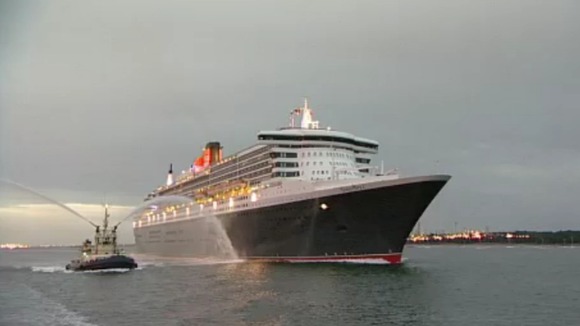 There’s not long to wait now till the 10th anniversary celebrations of Cunard’s flagship Queen Mary 2.  The celebrations will take place in Southampton on 9 May 2014 when all three ships in the fleet will be present.  Southampton has a history of hosting all three Cunard Queens and this will be the third occasion in the lines history.  The three ships will arrive together during the early hours of the morning followed by the commencement of the celebrations beginning with an early morning birthday salute.  The birthday salute will then be followed by an extravagant reception and lunch on board Queen Mary 2.  The reception and lunch is by invite only and guests on board will also be joined by His Royal Highness The Duke of Edinburgh.  To close the day’s festivities Cunard will cap the day off with a firework display to give all three ships a grand send off.  Queen Mary 2 will lead the Cunard Queens in convoy along the Solent.

Cunard has now revealed images highlighting the details of the day and the times crowds can expect to see the celebrations unfold.  The cruise line has even highlighted the best vantage points for the day.

The key local timings are shown in each of the images, progressing as the day goes on.

Key local timings for the day are as follows: During this time all three Cunard Queens will make their way along the Southampton waters.  Queen Elizabeth and Queen Victoria will lead the way followed by Queen Mary 2, which will be given a grand welcome by a tug providing water jets to herald her celebratory arrival.

Once the ships have arrived into the cruise port area, Queen Elizabeth and Queen Victoria will be manoeuvred into their positions for the day, which will be at the Queen Elizabeth II Terminal, approximately 30 metres apart and facing bow-to-bow.  Once the ships are in position, Queen Mary 2 will then sail past her sisters and to mark her arrival, the ships whistles will create a render of “Happy Birthday” and as many as 10,000 birthday balloons will be set free from the Queen Mary’s top deck by the Pavilion Pool.  These events will take place between 5.30 – 5.45am.

At 6pm, once the birthday arrival salute has taken place, Queen Mary will berth at the Ocean Terminal, close by to her sister ships.  This is where she will be based for the day.  Once Queen Mary 2 is in position, Queen Victoria will leave her temporary position and sail to the Southampton City Terminal but Queen Elizabeth will remain at the Queen Elizabeth II Terminal.

The on board reception, lunch and celebrations will take place throughout the day before the three Cunard Queens once again take formation at 8pm in the evening.  As the image below shows, it will now be time for three ships to form the image of a curved line, bow to stern finishing with all three at a distance of around 30 metres apart.  The first array of fireworks will then begin. At 10pm there will be a firework to light up the night sky, which will last a total of ten minutes.  Each minute is created to represent a year in the life of Queen Mary 2.  The spectacular fireworks will be set off from the rivers Hythe side opposite all three ships providing a special backdrop and a grand finale to the day.

All three ships will then depart at approximately 10.15pm when the fireworks have reached their dramatic climax.  This time, for the departure, Queen Mary 2 will lead the way followed by her sister ships.  The images shown do provide a guide to the best viewing spots for the day but for the firework display we recommend Hythe Marina, Mayflower Park and Town Quay for the best views and opportunities to photographically capture the celebrations.