Fred Olsen has announced the news of an innovative sailing set to depart in July 2015.  The cruise entitled Poison, Murder & Mystery offers passengers a unique cruising experience where guests can be involved in the cruise lines mystery as it evolves.  The cruise comes as a result of a creative collaboration between Mr Fred. Olsen Senior and Her Grace, The Duchess of Northumberland.

This adult only itinerary will take place over 16 nights and comprises an experience full of industry firsts.  Guests are invited to travel back in time to the 1920s and will even be given the opportunity to become a character on board.  The cruise line will take passengers on a journey of both body and mind, and the winning guest who solves the murder mystery will win an incredible prize of a world cruise for two.

The cruise will take place aboard Fred Olsen’s 880 guest ship Boudicca and will depart Rosyth, Newcastle on 10 July 2015.  Each day of the sailing will feature a new theme from the mystery.  The cruising experience is built to revolve around secrecy and suspense, linking the Duchess of Northumberland’s ‘Poison Gardens’ at Alnwick Castle, and that of Mr Olsen Senior in Guimar, Tenerife.  Alnwick Castle starred as ‘Hogwarts School of Witchcraft & Wizardry’ in the Harry Potter films. 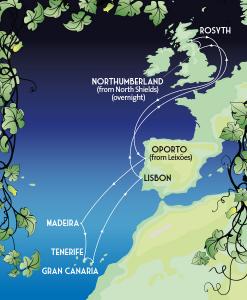 The cruise was launched at an exclusive event held by the cruise line at The Tower of London, hosted by the two pioneers themselves.  Alongside the on board adventure, guests will also enjoy a wide range of beautiful destination including Leixoes (for Oporto, Portugal), Funchal (Madeira), Santa Cruz (Tenerife), Las Palmas (Gran Canaria), Lisbon (Portugal) and Newcastle (UK).  The itinerary is already famous as the ‘Agatha Christie Route’.

Fred. Olsen is delighted that, as well as hosting the largest participative ‘murder mystery’ event ever held on a cruise ship – which will be officially witnessed on board by ‘Guinness World Records’ – the Duchess will be joining the ship for part of the voyage, along with Mr. Fred. Olsen Senior, it is hoped.

Her Grace, The Duchess of Northumberland, said:

“In Fred. Olsen, I was excited to meet someone with a fellow passion for poison plants, and together we have sown a seed that has flourished into this fascinating cruise experience for Fred. Olsen’s guests next year, linking our two unique gardens.

“I wanted to create a ‘theatre of poisons and poisoning’, and working with Fred. has allowed me to bring this desire to life aboard a cruise ship, where guests can sample something new, something different and something very special indeed!”

“It seemed to me the most natural thing to undertake such a cruise, with so few ‘Poison Gardens’ in Europe. For me, it is very special to be able to link these gardens with a unique cruise itinerary, and we know that many of our guests share an enthusiasm for gardening. We also know, from previous experiences such as our Titanic Centenary cruise in April 2012, that they enjoy dressing up and taking part in murder mystery-themed events.”

Highlights of the cruise experience will include a visit to The Alnwick Garden and Alnwick Castle The grand and magnificent home of the Duke and Duchess of Northumberland. Here, guests will not only see the Gardens – which have been transformed by Her Grace with an investment of over £40 million – but also visit the only ‘Poison Garden’ in Britain. In Tenerife, discover the mythical ‘Pyramids of Guimar’ and their own ‘Poison Garden’. Throughout the cruise, the subject of poison and mystery will be everywhere, with plays, talks and special tours – and a murder mystery starting as soon as guests get on board, which will run through to a ‘Grand Finale’ at Alnwick Castle.

Alongside the two special hosts, other personalities joining the itinerary include Felix Francis, younger son of thriller-writing legend, Dick Francis.  He will be joined by Peter Dean, Her Majesty’s Coroner for Essex and a former Forensic Medical Examiner; Doctor Dan Jones, eminent poison Historian and Archaeologist, who gives a closer look into Rasputin and the Borgias family’s darkest secrets and Doctor Mark Siddall, curator of ‘The Power of Poison’ exhibition at The American Museum of Natural History