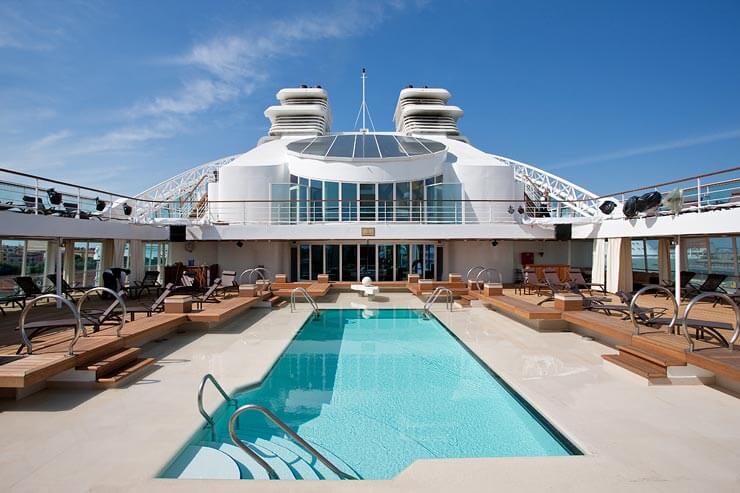 Seabourn have given their loyal followers something to look forward to today by announcing details of a formal contract signing for the construction of their brand new, all-suite vessel.  The new ship is set to go some way to replacing the capacity the cruise line will lose when the three ships in the current fleet are transferred to their now owners, Windstar in April, 2014, April 2015 and May 2015. The three ships set to leave the fleet are Seabourn Legend, Seabourn Pride and Seabourn Spirit.

The new vessel will have a passenger occupancy of just 604 guests and will be continue the modernisation of the Seabourn fleet, following on from the most recent Seabourn Odyssey in 2009.  The cruise line have announced that the new vessel will be based on a similar style to that of the Odyssey-class ships but will include additional features included expanded public areas and a whole extra deck.  At 40,350 gross tonnes, the ship will instantly become the largest in the fleet.

The configuration and design of the ship will once again focus on a high ratio of space per guest to enable the cruise line to continue their renowned reputation of highly personalised service.  Nearly one staff member per guest will be the norm on board and aboard this ship, unlike some vessels in the current fleet, every suite will feature a private veranda.

“The new ship will continue the evolution that began with Seabourn’s fleet expansion, adding modern design elements and innovations consistent with Seabourn’s reputation for understated elegance,” said Richard D. Meadows, Seabourn’s president. “With its delivery, the most highly rated cruise line in the world will also offer travelers the newest fleet of ships in the luxury segment.”

Seabourn have announced that the ship will be built by Fincantieri S.p.A. in Italy, with delivery scheduled for mid-2016.  This announcement continues the longstanding relationship between the parent company of Seabourn, Carnival Corporation and the world famous Italian shipbuilders.  The relationship now spans more than twenty years and continues to be as successful as ever.

Giuseppe Bono, Fincantieri’s Chief executive officer, said: “An order from a new brand is always a source of great satisfaction. Today we can also add a note of pride, because the addition to our customer base of Seabourn, the Carnival Group’s top-end cruise line, means that we are now building ships for all the operators in the ultra-luxury segment, a niche market that has seen strong investments in the past year”. Bono continued: “This gratifying result, which gives us cause to be optimistic about the future, is the product of the cultural renewal being pursued with determination at every level of our business activity.”