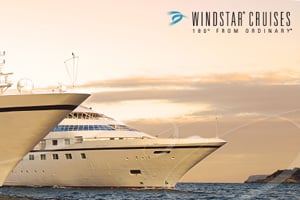 Windstar Cruises have announced that following their recent acquisition of three Seabourn yachts, the first to arrive to their fleet will be re-named Star Pride, formerly Seabourn Pride.  The new ship will be the first of the three new additions to the fleet boasting all-suite accommodation.  Star Pride will launch in May 2014 and will spend her first Windstar season sailing in Europe offering passengers exciting voyages which will go live on sale on 14 May 2013.  The two other additional ships to follow have yet to be named and we are expecting further announcements over the coming weeks.

“Star Pride and the additional two yachts will fit perfectly into Windstar’s intimate, yacht-style cruising by offering a small-ship luxury cruise with 300 passengers or less in a casually elegant style going to places bigger ships cannot go,” said Hans Birkholz, Windstar Cruises’ chief executive officer. “We are thrilled to now be able to offer even more intriguing choices in Europe for the 2014 season.”

The brand new addition of the three yachts is part of the lines expansion plans and product development initiative.  The grand expansion of the fleet enables the cruise line to unveil a wider range of global itineraries, featuring a selection of brand new destinations.  The Star Pride’s European adventures will include new ports of call, never visited before by the cruise line and will also feature Black Sea sailings.

All three of the new yachts to the fleet are sister ships and identical in style.  At 10,000 gross tons, the new yachts offer a wonderfully intimate and luxurious cruising experience with a capacity of just 212 guests per cruise.  Each of the new yachts will receive a complete renovation before entering service to reflect the style and charms of the Windstar brand.  Upon completion of the renovation works, all three yachts will showcase signature Windstar experiences including the highly fascinating open bridge policy, extravagant sail-away parties, open deck barbecues and much more.

Following the May 2014 introduction of Star Pride, Windstar Cruises will take possession of the additional two yachts in in April and May 2015. These two yachts are scheduled to start sailing in May of 2015 following their dry-dock period.