What's on board Scarlet Lady

Find out what's on board Virgin Voyages' new ship Scarlet Lady. Read about the entertainment  and fantastic facilities that are available. Pop back here regularly to keep up to date with what's on offer from Scarlet Lady.

Roman and Williams, the New York-based design studio known for their work on hotels, restaurants, retail spaces and homes, designed Scarlet Lady's on-board ballroom, The Manor. A venue for innovative entertainment, music, dancing and fun, The Manor is destined to be one of the most exciting places on the entire ship.

If you're looking for entertainment on Scarlet Lady, this is where you'll find it.

Located at the top of the ship on deck 16, the Athletic Club will be a yacht-inspired feature of Scarlet Lady, offering sailors the largest daybed at sea, perfect for sunbathing or star gazing. Next to the daybed will be a 220-square-foot area of triple netting where cruisers can lay out and overlook the open space and decks below, an Insta-ready catamaran experience. The Athletic Club spans the entire aft of the ship and offers10 cabanas overlooking the ocean.

Around the corner from the sports bar and at the very aft of Scarlet Lady is The Dock, a 220 square foot outdoor lounge open to all. The Dock was created as a space for sailors to socialise and lose themselves in beautiful views.

Inspired by the seaview lounges of the Hamptons and Ibiza, The Dock is designed for sailors looking to relax in tranquility during the day with a cold beverage and a book, surrounded by natural beauty. It will feature wooden deck chairs, loungers and day beds: The ultimate venue to chill out.

Also located on the top deck, Richard's Rooftop will be a chic outdoor lounge (with full bar) reserved exclusively for the ship's suite sailors and their guests. Named after Virgin's founder Richard Branson, Richard's Rooftop will have a futuristic feel with circular loungers, giant umbrellas and accents of coloured crystals that will cast rainbow reflections around the space. 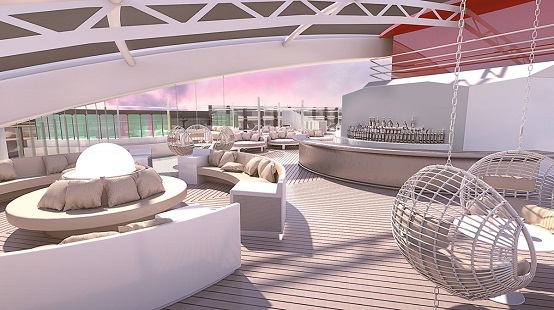 Inspired by Richard Branson’s first-ever Virgin music studio of the same name, the creative, dance music-fueled space has been expertly outfitted with details, platforms and corners that make it both somewhere to see and to be seen.

With a background in film, Roman and Williams, the design firm founded by Stephen Alesch and Robin Standefer, incorporate a deep level of understanding for storytelling and immersive experience in much of their work. It was their work on the revolutionary Freehand hotel-hostels and New York City's perennial hotspots, The Gilded Lily nightclub and The Boom Boom Room at The Standard Hotel, that made them the natural first choice for designing Virgin Voyages’ own on-board nightclub. 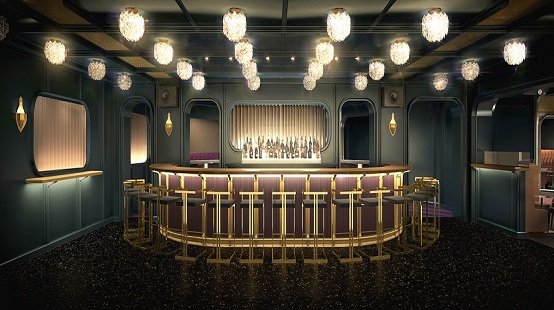 Scarlet Lady will bring stylish tattoo artistry to the high sea with Squid Ink, an on-board tattoo parlour. To create the one-of-a-kind experience, the cruise line has teamed up with the ink industry legends from World Famous Tattoo Ink.

“Tattooing is a time-honoured seafaring tradition and we’re continuing that legacy with rock and roll style by bringing some of the best ink artists to sea,” Tom McAlpin, president and CEO of Virgin Voyages, said. “Our sailors are looking to make lifelong memories, and we think there’s no better way to commemorate their first voyage with us than with a souvenir they’ll never lose track of.” 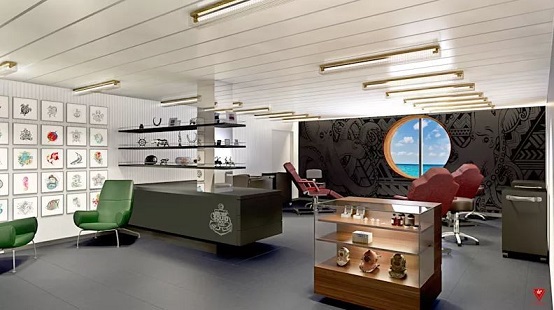 Concrete Amsterdam designed this venue as an experimental lab-like restaurant where chefs will have carte blanche. They’ve handpicked all the ingredients and written them down on your menu. As for how those ingredients come together, you won’t know unless you give it a try!

The entrance to the restaurant is an experience in itself with lighting fixtures that mimic the periodic table to immerse diners in the laboratory feel. Diners follow along as the chef combines flavours throughout each course of every meal. Cooking classes, mixology schools and coffee labs will take place here aboard every cruise as well as a few late-night lock-ins. 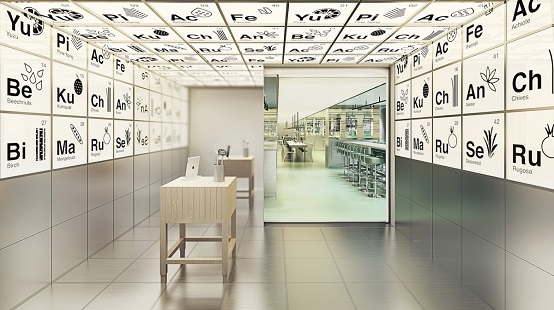 Designed by Concrete Amsterdam, Razzle Dazzle is the place where your vegan friend, your carnivorous friend, your vegetarian friend and your friend that hasn’t done their food shopping in two years can all enjoy their favourite dish. Feeling a bit cheeky? Sashay over to the Red Bar for a few extra surprises.

Considered one of the most energetic spots on board, Razzle Dazzle gets its name and design from the practice of camouflaging ships during World Wars I and II using patterns of black and white paint. 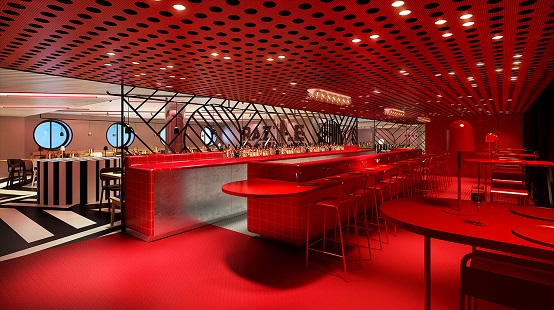 Glamour is on the horizon at the aft of the ship. Designed by Roman and Williams, Wake offers sailors a dramatic view of the ship’s wake while serving a sophisticated take on steak and seafood as well as a Sommelier-led Magnum menu.

Wake is the largest restaurant on board Scarlet Lady at 5,866 square feet and serves breakfast, lunch and dinner. 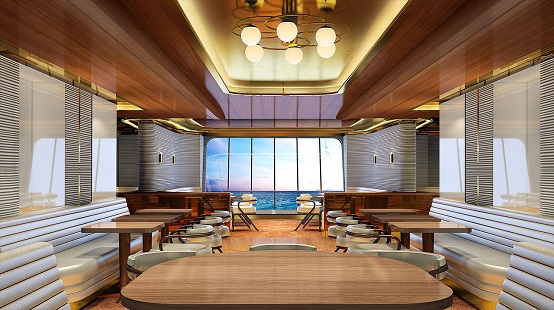 If you would like more information on
Virgin Voyages Scarlet Lady please call us on 01246 819 819.

» Back to the top of the page