Borealis has joined the Fred Olsen fleet and is poised to receive the recognisable livery as part of an extensive refit. Sailing from April 2021, with itineraries on sale NOW, the new ship brings new possibilities to fans of Fred Olsen’s friendly smaller ship cruises.

Where is Borealis sailing in 2021?

Borealis will arrive with a bang in April 2021 when she begins her inaugural season with a brand-new sailing exploring the gloriously rustic Scottish Isles and Lochs. From there, Borealis will replace Black Watch for a summer sailing from Liverpool to Northern Europe and the Mediterranean, cruising French rivers and joining her fellow Freds in Lisbon. Borealis will end the season with a sunseeking sojourn to the Canary Islands for a Christmas and New Year worth waiting for.

The second ship in Fred Olsen history to be named Borealis takes its name from the cruise line’s Norway heritage, a place where the Aurora Borealis dances overhead – much to the delight of many a cruiser on the decks below. With less than 1,500 guests and more public space than other ships in the Fred Olsen fleet, Borealis will be a relaxing home-from-home anywhere in the world. Celebrate the romance of cruising all over again on a ship with personality and plenty of new-to-the-fleet features.

Borealis will take over Black Watch’s sailings from Liverpool in April 2021.

The Natural Wonders of Iceland 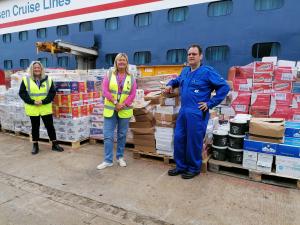 Fred. Olsen Donates £33,000 Of Food To Scottish Charity Fred. Olsen Cruise Lines joined forces with food distribution charity, FareShare, to donate more than £33,000 of food to causes in need in Scotland while…
All News