Dubai is one of the world’s most futuristic and glamorous cities, offering sprawling malls and stunning landscapes that you’ll be able to explore during your three-night luxury stay. The glitz continues as you board MSC Virtuosa which will transport you to the other highlights of the Persian Gulf, including everywhere from the laid-back Sir Bani Yas Island to cosmopolitan Doha. 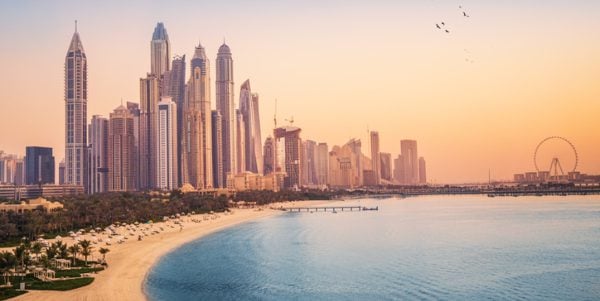 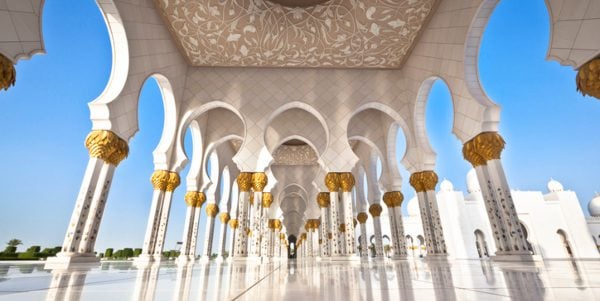 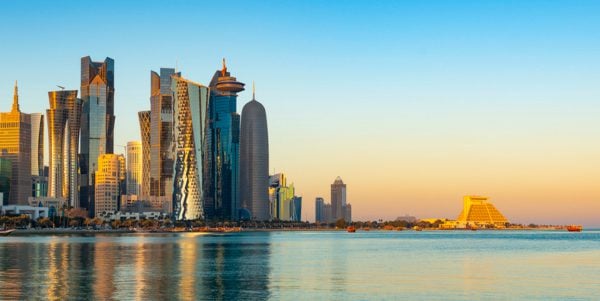 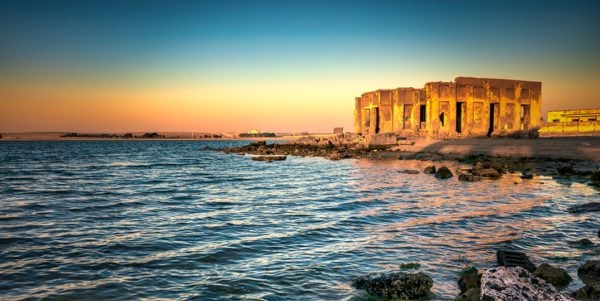 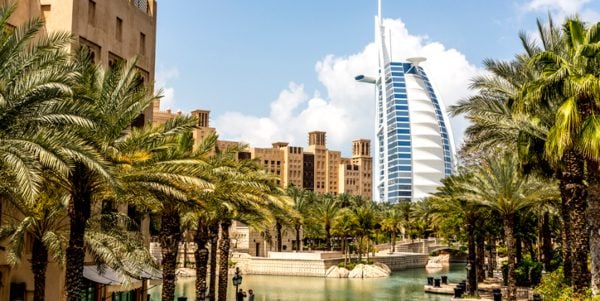 Fly overnight from the UK to Dubai.

On arrival, take your private transfer to your four-star hotel for a three-night stay.

Take your private transfer to the port and embark MSC Virtuosa for your seven-nights Emirates cruise. Depart Dubai.

The United Arab Emirates’ capital, Abu Dhabi, where your MSC cruise ship awaits your return, offers an intriguing contrast to its freewheeling neighbour Dubai, a little over an hour’s drive down the coast.

Leading attractions on your Dubai, Abu Dhabi & Qatar cruises to Abu Dhabi in the United Arab Emirates include the extravagant Emirates Palace hotel and the even more spectacular Sheikh Zayed Mosque, while the various attractions of Yas Island, home to the vast Ferrari World theme park, lie just down the road.
The blockbuster attraction at Abu Dhabi’s Yas Island is a dream excursion for any F1 fans. The “world’s biggest indoor theme park”, it offers a wide range of Ferrari-themed rides and displays which will appeal both to kids and grown-ups, including the chance to drive an F1 simulator or to ride the Formula Rossa roller coaster (the world’s fastest) or to experience race-day acceleration in the G Force “tower of speed” – as well as numerous gentler family-oriented rides.
Dedicated motorsports enthusiasts will also enjoy the big display of classic and contemporary Ferraris
, and the virtual tour of the firm’s famous Maranello factory. Some 15km from central Abu Dhabi, the mighty Sheikh Zayed Mosque dominates all landward approaches to the city, its snowy-white mass of domes and minarets visible for miles around and providing a spectacular symbol of Islamic pride at the entrance to the capital of the United Arab Emirates.
Completed in 2007, the mosque was commissioned by and named after Sheikh Zayed bin Sultan al Nahyan, who lies buried in a modest white marble mausoleum close to the entrance. The mosque is one of the world’s biggest and certainly the most expensive, having taken twelve years to build at a cost of around US$500 million. It’s also unusual in being one of only two mosques in the UAE open to non-Muslims.

An enchanting stop on this MSC Cruise to Dubai, Abu Dhabi & Qatar is Sir Bani Yas island.
It has nothing to do with the hyper-technological progress which you will admire on your trip to the capital, Abu Dhabi.
The MSC Beach Experience on Sir Bani Yas means relax. It includes a delicious barbecue lunch of succulent burgers and other grilled delights, fresh salads and vegetables, pastries and fruit. And you can enjoy cocktails, ice-cold beers and soft drinks from the island’s six bars.
Entertainment options range from beach tennis and volleyball to paddle boarding and snorkelling, not forgetting gym and dance activities and fun beach parties. Meanwhile, the inflatable water park and kids’ play area will keep children happy all day.
Without leaving the beach, you can pamper yourself with a revitalising massage or beauty treatment provided by our expert MSC Aurea Spa personnel. And if you’ve booked an island tour–or decide to join one at the last minute–you’ll find our Excursion Office right there on the beach too.

On Sir Bani Yas, just like on the islands of Dalma and the six nearby Discovery Islands, an enormous nature reserve has been designated to species in danger of extinction, be they from the Arabic peninsula or from Africa.
You can explore a one-of-a-kind island destination. Go horse riding or jeep riding; take your time at wildlife watching hides, then settle down on a traditional dhow for a mini cruise.
On Sir Bani Yas, everyone can enjoy the beach experience of their dreams or experience a safari like no other between the mangroves, the desert and the protected bay areas.

Dammam is the sixth-most populous city in Saudi Arabia after Riyadh, Jeddah, Mecca, Medina and Khamis Mushait. It is the capital of the Eastern Province. With a total population of 1,252,523 as of 2020.

A journey to Qatar becomes special on an MSC cruise.

A cruise to Dubai, Abu Dhabi & Qatar will introduce you to Doha, the country’s futuristic capital on The Gulf. The city is preparing to host the 2022 World Cup, enhancing its already awesome skyline with new super modern skyscrapers.
The Aspire Tower in Doha (300 meters) dominates the skylines. It is the highest building of the country, whose shape is akin to a torch. This building is located near the city of sport, which has already hosted events such as the XII Pan Arab games and which will have a central role during the World Cup. Much of Doha, including places of worship such as the new mosque in the Qatar Faculty of Islamic studies, seems to be already in the future. Don’t miss a visit to the Pearl, a futuristic artificial circular port which is being developed to the north of the city centre, and yet, as you will notice on your MSC excursion, the ancient heart of the city still beats strong.
In the historical centre of Doha you will find a Suq where everything – from camels to gold – can be exchanged, and the Al Khoot fortress, dating back to the end of the nineteenth century and now converted into a museum. During your cruise to Doha with MSC Cruises, some excursions will lead you on the discovery of the north of the country and the history of this fascinating Emirate. In Ash Shamal the Al-Zubara fortress rises up from the middle of the desert and dates back to the thirties. The building, which at first sight seems an enormous sand castle, has been completely restored and transformed into a museum. Near the fortress you can also visit the archaeological remains of another, even older, defensive structure, Qal’ at Murair. Also you will find Zubara, a village of traders and pearl divers, a settlement which dates back to the nineteenth century, and later abandoned.

A shore excursion on your MSC Emirates and Oman cruise can be the opportunity to discover Bur Dubai, at the heart of the metropolis of Dubai, on the south side of the breezy Creek. It’s the oldest part of Dubai and it offers a fascinating insight into the city’s traditional roots.

This is where you’ll find many of the place’s most interesting Arabian heritage houses, clustered in the beautiful old Iranian quarter of Bastakiya and the waterfront Shindagha district, as well as the excellent Dubai Museum and the atmospheric Textile Souk.
MSC Dubai, Abu Dhabi & Qatar also offer excursions to the bustling district of Deira: the centre of Dubai’s traditional commercial activity, much of it still conducted in the area’s vibrant array of old-fashioned souks, including the famous gold and spice markets. A few kilometres south of the old city centre, modern Dubai begins in spectacular style with Sheikh Zayed Road, home to a neck-cricking array of skyscrapers including the glittering Emirates Towers.
Even these, however, are outshone by the massive Downtown Dubai development at the southern end of the strip, centred on the stupendous new Burj Khalifa, the world’s tallest building, flanked by further record-breaking attractions including the gargantuan Dubai Mall and spectacular Dubai Fountain.
West of the Sheikh Zayed Road, the sprawling beachside suburb of Jumeirah is the traditional address-of-choice for Dubai’s European expats, its endless swathes of walled villas dotted with half a dozen shopping malls and a smattering of low-key sights. At the southern end of Jumeirah, there are more iconic sights in the sleepy suburb of Umm Suqeim, including the wave-shaped Jumeirah Beach Hotel, the extraordinary mock-Arabian Madinat Jumeirah complex and the unforgettable Burj al Arab hotel.

Disembark MSC Virtuosa and take your private transfer to the airport for your return flight to the UK.