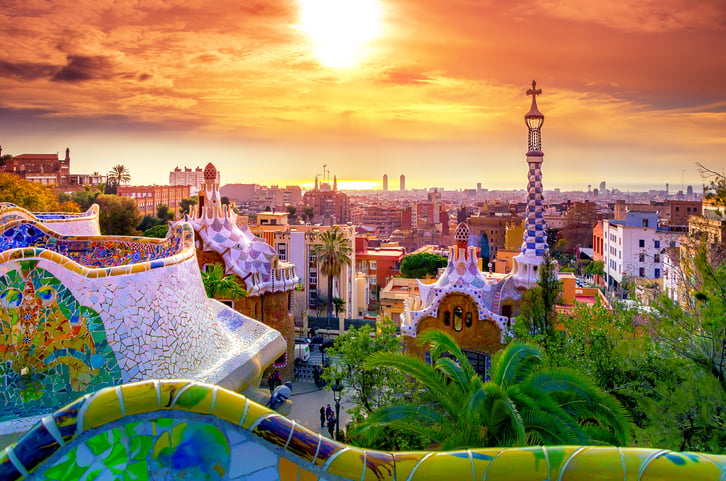 It’s the highlight of a Mediterranean cruise itinerary and with good reason. Barcelona has it all. Architecture that wouldn’t look out of place in the storybooks, thanks to the whimsical ways of Antoni Gaudí, and a labyrinthine Gothic Quarter that was once frequented by more gaggles of geese than throngs of tourists. A flock of thirteen remain, airing their feathers in the courtyard of the Santa Eulalia Cathedral as gargoyles look on. The shopping in Barcelona is some of the best in the Med and the food…Oh, the food.

Embrace long, sangria-filled afternoons, bookended by bowls of tapas in hideaways just off Las Ramblas. Or linger longer over seafood pasta, dining under the cream canvas canopies of al fresco spots on the harbourside. There are beaches and vineyards, museums and markets. And sun, almost always sun.

Here’s what to do in Barcelona next time you visit.

Things to see in Barcelona

Spanish poet Federico García Larca declared Las Ramblas to be ‘the only street in the world I wish would never end’. Stretching from the monument of Christopher Columbus to the Plaça Catalunya, the tree-lined boulevard cuts through the heart of the city. From the over-zealous waiters touting menus with English translations to the human statues and street performers that capture the attention of everyone’s inner child with their poses and party tricks, Las Ramblas is a feast for the senses and an inevitable part of any visit to Barcelona.

One of the most notable buildings along Las Ramblas is La Boqueria. There are 40 or more food markets in Barcelona, each neighbourhood has its own, but only La Boqueria has evolved to become an attraction in its own right. Arrive after lunchtime and it is manic; beat the crowds and it is magical. Eat with your eyes at food stalls piled with pouting fish, fat prawns and creamy slabs of goats’ cheese. With an appetite earned, it is on to the unassuming hole-in-the-wall style eateries, family-owned for generations, their Catalonian specialities served up to hungry diners perched on high stools. Bar Pinotxo gets our vote. A mere slither of a place, its butifarra and garbanzos have earned it a reputation as one of the tastiest tapas joints around. There’s no menu as such, just ask Juanito in the maroon waistcoat to tell you the dishes of the day.

A stone’s throw from Las Ramblas is where many of Barcelona’s visitors first enter the childlike imagination of Antoni Gaudí, the Catalan creator who left the city awash with colour. Casa Batlló stands proud on the Passeig de Gràcia, and its eclectic façade and swirling interiors have been described by Lonely Planet as ‘Gaudí at his hallucinatory best’. Be there for 8.30am and you’ll be one of a lucky few to explore the house without the crowds. Gaudí’s gloriously gaudy creations litter the city, from standalones like La Pedrera, with its sculpted limestone curves, to Park Güell, a toy town of giant mosaic lizards and Hansel and Gretel houses with red mushroom roofs. Gaudí himself called the park home for his last 20 years, residing in the spired terracotta house at its centre. Sagrada Família, Gaudí’s most famous work and that which he considered to be his greatest, remains unfinished after well over a hundred years. That said, the subtle scaffolding that surrounds parts of the Roman Catholic church doesn’t even slightly detract from its stop-you-in-your-tracks grandeur. Make sure you book your tour tickets online to avoid disappointment; 4.5 million people visit each year and tickets are strictly limited to avoid overcrowding.

Gaudí isn’t the only artist to have left his mark on Barcelona. Joan Miró was born in the city and he relished the idea of his work being used to welcome those who arrived by air, land and sea. Three works of art serve this purpose: a giant mural on the façade of the airport’s Terminal 2B, a circular mosaic underfoot on Las Ramblas for those making their way from ships to the city centre, and finally the Woman and Bird sculpture close to Barcelona’s main train station.

More artistic inspirations are afoot in Barcelona’s atmospheric Gothic Quarter, where medieval alleyways twist and turn to reveal sheltered squares and hidden cloisters. The Old Town radiates out from the Santa Eulalia Cathedral, with attractions such as the Church of Santa Maria del Pi, the Jewish district of El Call and the 13th century Palau Aguilar, home of the Museu Picasso, all in the vicinity. Make time too to visit the Museu d’Historia de Barcelona, where excavations in the 1920s unearthed 4,000 square metres of Roman streets and villas that are now encased beneath glass floors.

If you have already ticked Barcelona’s big-ticket attractions off your list, there are plenty of other options besides. Sun yourself on Barceloneta Beach or join the locals on the quieter Bogatell Beach. If you’re prepared to invest 20 minutes on a train ride, you’ll be rewarded with near empty sands and beach shacks galore at Castelldefels Beach just outside the city.

The beaches of the Costa Brava are well within reach of the city, with Excursions Barcelona’s full-day ‘Kayaking & Snorkelling Tour’ making a scenic two-hour trip kayaking along the coast. When you’re all paddled out, there’s the option to make your acquaintance with the local marine life, including octopus and moray eels, before tucking into a picnic on the beach.

If vintage motors are more up your street, With Locals have a totally new way for you to see the city, by way of a World War II sidecar. Barcelona local, Nuria, will give you an insider’s rundown on the city’s hidden gems, history and culture on a ride that takes you from Las Ramblas to Barceloneta Beach, Plaça Catalunya and more, all while giving your legs a rest.

Barcelona with kids is a breeze. Camp Nou is a mecca for die-hard football fans and the city’s various hop-on-hop-off sightseeing buses stop right outside Europe’s biggest stadium. If you’re lucky enough to be in town for gameday and plan on buying tickets, bear in mind that La Liga can reschedule matches up to 14 days prior, so nothing is set in stone until then. Guided tours of the famous stadium are available on days without a game scheduled and you’ll not only come face-to-face with the club’s five Champions League trophies but also get the chance to walk in the players’ tunnel, sit on the team bench and make yourself at home in the first team dugout.

If the children are antsy after a day or two at sea, you’ll appreciate the close proximity of L’Aquarium Barcelona to Port Vell. Without doubt, this is one of the best things to do with kids in Barcelona, with the aquarium being one of Europe’s largest with 11,000 animals representing some 450 species. The Oceanarium is a highlight, its transparent tunnel creating an 80-metre underwater walkway as sandbar and sand tiger sharks prowl overhead.

Places to eat in Barcelona

Barcelona has something to satisfy every appetite and budget. There are cheap eats at modest market stands and Michelin-starred restaurants run by some of the most respected and renowned chefs in the world. You can eat like a local at rustic bodegas or dine with high society at waterfront restaurants where the glassware gleams almost as much as the yachts in the harbour.

Market restaurants are a huge part of Barcelona’s identity and while La Boqueria has its fair share, in-the-know locals tend to leave it to the tourists and head for little-known haunts in their local barrio instead. The Mercat de Santa Caterina is a stone’s throw from the Sagrada Família, yet you’ll still find a three-course lunch with the freshest fish in the city for just €12 at Bar Joan, with another euro getting you a glass of decent local wine. Building buffs will recognise the market by its undulating pixelated roof, the result of a huge makeover in 2005.

Food tours are hands down the best way to see a new city. You’ll see the sights, get the inside track from a local and sample the specialities that tend to be easily overlooked in favour of the easy to decipher English menus touted along Las Ramblas. The Barcelona Taste is thinking outside the box with its new tapas tour of Poble Sec, a neighbourhood that has become the place to be for aspiring young chefs. The 3-hour tour promises food galore as you uncover the neighbourhood’s up and coming foodie scene that has been built around traditional Catalan dishes with a contemporary twist.

Finally, if you’d rather dine close to the ship, Port Vell has endless options. La Mar Salada is a highlight of the port-facing strip along Passeig de Joan de Borbó. The paella here is exceptional but so too is a €17.50 set lunch menu featuring the catch of the day, collected by owner Albert each morning from the nearby harbour fish auction.

Places to drink in Barcelona

Any tour that combines food and wine is a clear winner in our eyes. Join Foodie & Tours in beautiful Alella, just 20 minutes outside Barcelona. One for the romantics, the rural Catalan winery with phenomenal views over the Mediterranean Sea is a breath of fresh air from Barcelona’s intoxicating hustle and bustle. You’ll tour the vineyards and 14th century estate, before laying out your picnic blanket and delving into a basket full of artisan tomato bread, sausage, cheese and fresh fruit, all washed down with a bottle of Bouquet d’A Blanc.

Back in the 16th century, the residences along Carrer Montcada housed Barcelona’s most influential families. Nowadays, the moody old Ribera district hosts some of the city’s most sultry flamenco performances. Palau Dalmases Espai Barroc is located in a former Gothic palace, the period features and antique furniture building an atmospheric backdrop for the highly-charged performances.

Barcelona offers plenty in the way of rooftop bars promising cocktails with a view. They range from the high-end, haute cuisine-offering Arola, with a 700-bottle wine repository and a contemporary tapas menu serving up veal tartare and octopus with yuca chips, to the tranquil La Terrassa. Located atop the Villa Emilia in the Eixample district, the bar offers calm amidst the hustle and bustle, with live music and Thursday/Friday barbecues attracting a local crowd and a chilled vibe in which to sip your vermouth. 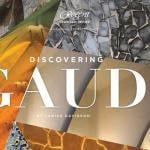 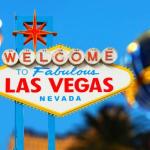