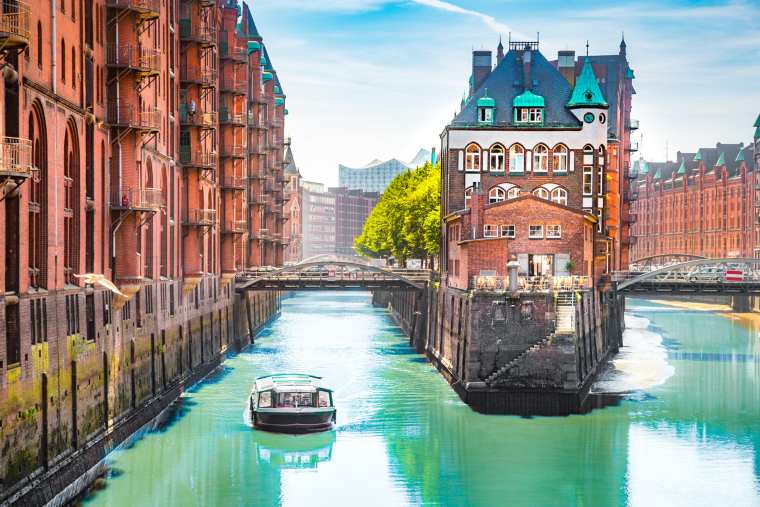 Hamburg has a history and identity tied inextricably to the sea, so there’s little wonder that the destination is a clear winner with cruisers, especially those looking to dip a toe in the water on a short cruise from Southampton. Germany’s second-largest city and biggest port has been a major player in maritime terms since its role in the Hanseatic League back in the Middle Ages, and its port area remains the place to be if you want to really get a feel for the place. From the eccentric to the extravagant, Hamburg promises it all in the confines of its diverse neighbourhoods. Here’s what to see in your 36 hours in Hamburg on a short cruise break.

As you might expect from the second busiest port in Europe and a place with maritime links that have stood strong for centuries, much of what there is to do in Hamburg is centred around the water.

The HafenCity waterside quarter has only been around a decade but in that time, it has become a hub of activity for tourists and locals alike. A combination of heritage buildings and cutting-edge architecture jostles for space along the edge of the Elbe, and it’s from here you’ll depart on Hanseatic tours of the city by boat. If you only do one thing in HafenCity, aside from sample a fischbrötchen (more on that later), make it a visit to the Elbphilharmonie. Hamburg’s tallest building is topped with thousands of curved reflective windows that imitate the waves and shimmer in the sunlight. The view from it is as impressive as that of it, with an observation deck and excellent café featured in the Plaza on the top floor. Inside, the Great Concert Hall is considered one of the most acoustically advanced venues ever built and the Elbphilharmonie Orchestra mustn’t be missed if the timings are right for your visit.

Encompassed within the boundaries of HafenCity is Hamburg’s Speicherstadt, or the ‘City of Warehouses’. With gabled red-brick facades and criss-crossed canals, the Speicherstadt is the most photogenic part of town, particularly when lit up at night, and it’s where you’ll find some of Hamburg’s best museums. Miniatur Wunderland fills an entire warehouse with the largest model railway in the world and it’s a must for model train fans or anyone visiting Hamburg with kids. Be sure to watch the technicians at work as they continue to grow the exhibit; it’s set to expand right through to 2028, with new parts of the world added all the time.

Equally fascinating and only a short walk away from Miniatur Wunderland is the International Maritime Museum, distinguishable by the huge propeller that sits out front. All kinds of curiosities reside inside, from letters written by Admiral Nelson to a 3,000-year-old canoe discovered in Hamburg harbour. It’s a must for any keen cruiser.

A little further along the river is the Elbe Tunnel. Cruise ships sail from the opposite side of the water to the city centre and this epic feat of engineering connects the two from 24-metres below surface level. When it opened in 1911, the 426m tunnel was unlike anything ever seen before and its vintage signage, wrought iron staircase and maritime motifs alone are worth the trip.

While the Reeperbahn might be mentioned in the guide books as a highlight of the city, we found it to err on the wrong side of seedy. Instead, stop just short of the area at the Spielbudenplatz of St Pauli. An urban beer garden in summer and Winterdeck with mulled wine and hot cocktails in winter, street food sessions here are a highlight of short breaks in Hamburg at any time of year. Food trucks roll in under various guises, from farmers markets to currywurst-heavy beer festivals and even vegan street food parties.

Hamburg has enough signature dishes to see you through a whole day of dining. Start your morning with a fronzbrötchen at Klein Konditiorei. Found nowhere but Hamburg and translating simply as ‘French roll’, the doughy buns see flaky pastry wrapped around a divine concoction of sugar, butter and cinnamon. They won’t help your waistline, but they’ll warm your heart.

Walking along the waterfront, it quickly becomes apparent that there is only one dish taking pride of place on the menu; fischbrötchen are found everywhere in Hamburg but they taste best by the river, where kiosks called fischbrötchenbude serve various versions of pickled, fried and smoked fish in a crusty roll. Another place to get your fill is Hamburg Fish Market, an institution since 1703 and a place where the night owls and early birds meet at 5am for fish sandwiches as the sun rises over the Elbe. Don’t worry if you’re less keen on a dawn start, they’re open until 9.30am.

Dialogue in the Dark

One of the most memorable drinks you’ll have in Hamburg follows one of the most memorable experiences. Dialogue in the Dark is an experiential exhibition that sees visitors led by blind guides in absolute darkness, negotiating the everyday situations anyone with 20/20 vision takes for granted, like crossing a busy road or walking in the park. You can’t help but feel affected after the experience, which has now been rolled out from its original Hamburg location to 41 countries around the world, and drinks at the Dark Bar afterwards are a great place to discuss it.

Anyone with a penchant for gin and a fancy for something a bit special should pay a visit to Clockers Bar. It isn’t easy to come by – you’ll find nothing more than a door marked with the number 27 – but the out-there bar inside is seriously cool, with moss on the walls and a tree spreading its branches across the bar. Clockers produces its own gin and has come to be known as one of Hamburg’s best bars.