Fred. Olsen is not a cruise line that I had thought about sailing on with kids, especially when visiting Norway and the Norwegian Fjords, however we were pleasantly surprised. Read on to hear about our family cruise holiday experience.

We chose to sail aboard Balmoral out of Newcastle on a seven-night scenic cruise, calling at Bergen, Flam, Olden and Helleslyt.

We’re usually a family that will just go for an Inside cabin to save on cost, however, due to the type of cruise, we paid the extra for a Balcony cabin and are so glad we did. One tip I’d like to point out is to book a port-side Balcony cabin. We found that most of the sights along the way, such as the Pulpit Rock on the Lysefjord, a popular spot for a picnic, as well as the Kjeragbolten, which is a boulder wedged in the mountain’s crevasse and the famous Seven Sisters all fell to be on the port side.

For us there was no better feeling than being sat on our balcony with a glass of wine in hand, just admiring the stunning scenery as we sailed by. In fact, we spent most of our time on the balcony when we were in our cabin. The kids also loved spotting things out along the way, from the goats on hillsides to people waving and even people paddling past on their canoes.

As we sailed in August, Fred. Olsen put on a kid’s club called ‘Skippers’, with a team of teachers brought in specially to run it. The times generally ran from 3pm – 5pm, then also 7.30pm – 9.45pm on port days plus a morning session on sea days. The types of activities they got up too ranged from arts and crafts to games around the ship, even cookie making in the Palms Café and being invited to the Bridge for a tour and a talk with the Captain.

Anyway, let me tell you what there is for kids to do in Norway. Our first port of call was Bergen, Norway’s second-largest city. We hadn’t pre-booked any specific trips here as we weren’t 100% sure what we wanted to do. The cruise director announced each morning how far a walk it was to get to the main town, with Bergen was just a 5-minute walk along the harbour. Once we arrived, it was full of boutique shops and restaurants in Norwegian style buildings just as you see in the magazines. 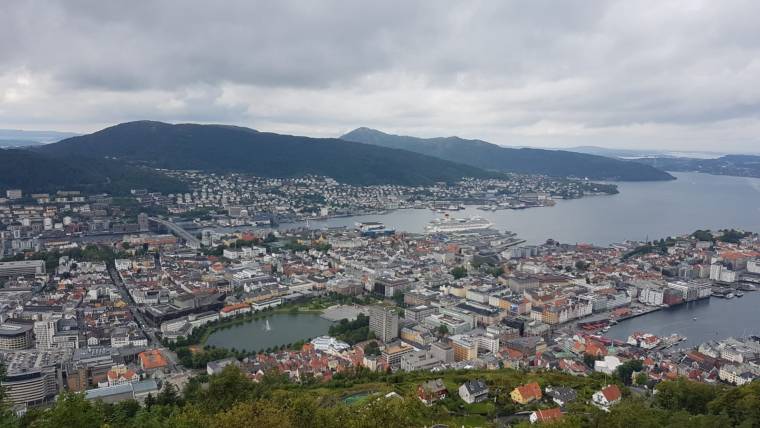 Venturing just a few minutes further, we saw the station for the Fløibanen Funicular, a taxi cable car to the top of Mount Fløyen. It takes you up the hillside to the top of the mountain in six minutes. Once you reach the top, the views of the city are spectacular, with many viewing spots. We found many different parks on our walks around the peak, all within minutes of each other, so it kept the kids well entertained. There was also the Troll Forest and the Three Billy Goats Gruff bridge, plus plenty of picnic stops and benches too. We also found a lake at Skomakerdiket on Mount Fløyen, just a couple of minutes from the funicular station where you can canoe for free! Yes, for free, and what an experience this was. It is available every day during the summer months, no registration or pre-booking is necessary, just turn up. Oh and life jackets are provided too!

We booked a return ticket on the funicular costing around £24 for a family of four, however we chose to walk back down. It was a 3km walk taking around 45 minutes, with more activities and parks along the way for the kids.

Back on the ship in time for our evening meal in the main dining restaurant and the staff couldn’t have made the girls feel more welcome if they tried. We followed dinner with a show, again the kids were absolutely mesmerised, before retiring to the cabin as we’d done plenty of walking.

Our next stop was Flam at the inner end of the Aurlandsfjorden, a branch of Sognefjord. The ship pulls right into the centre and after a 200m walk you’ll find shops, bars, restaurants and the bus and railway station.

Here we had pre-booked the Flam Railway; after talking to many people and doing our research we just thought this had to be done. It wasn’t a cheap excursion, however it was worth every penny spent! We booked through Fred. Olsen and we were extremely impressed by the smooth process. Pre-booking gave us the guarantee of a seat on the carriage and another tip would be to get on the right-hand side if you can. Along the journey, you are told of the history of the railway. It’s 866-feet above sea level and is a year-round attraction. The only point on the railway where two trains pass is at Berekvam, which is the halfway point from Flam to Medral. Other than this, it’s a single track wrapped around the mountains. It really is a voyage of discovery through breathtaking scenery.

Further along you get a quick five-minute photo stop at Kjosfossen waterfall, where you will witness a mysterious woman with long hair and a red dress dancing to a Norwegian folk song. The myth is that she’s an elusive spirit from Norse mythology and according to the local folklore, she lures men into the woods to seduce them, so hold on to your fellas!

Arriving at the top in Medral, many locals got on and off. You are advised not to get off the train and instead to just sit back and enjoy the view of the way back down. If you’re more an adventurer, you can hire a bike and cycle the Rallarvegen back down to Flam, which has been voted Norway’s most beautiful cycle route. You’ll also get to experience routes 21 hairpin bends, which you’ll see from the train.

If you’d prefer to get off the ship and go hiking in Flam, a walk up to the Brekkefossen Waterfall is well worth a visit. It’s around 30 minutes from where the ship docks, then around a 30-minute ascent to climb, but the view from the top is absolutely jaw-dropping. We did this with our two small children, aged 6 and 4, so it’s not hike! We did count 260 steps up though.

We cruised back down the Naeroyfjord once leaving Flam. It is now a listed UNESCO World Heritage Site and if you’re lucky enough you can spot seals here too. The beauty of cruising with Fred. Olsen is being able to sail down the smaller, narrower fjords that the big ships can’t get in, something we witnessed first-hand.

The next port of call was the one we were all excited about the most, Olden. We’d pre-planned to do the Loen Skylift which only opened in May 2017. It’s a whopping 1011m above sea level, the cable car takes you to the top of Mt. Hoven in around 5-7 minutes. Here you’ll have breathtaking surroundings of mountains and lakes; it’s the most scenic place we’ve ever visited!
Once at the top, you can choose to hike, bike or even ski! There’s also a gorgeous restaurant with floor-to-ceiling windows giving you panoramic views across the fjords. Treat yourself to warm pancakes and a drink before your adventure.

With our girls, we had so much fun stacking stones (commonly known as Cairns). The whole place is so well thought of because there are various paths leading to different walks/hikes depending on the strength of walk you want to do. It ranged from 2km gentle paths to a 9km hike with rocky paths; there really was so much to suit all abilities.

You’ll find some photos of the views in this blog post; it’s just incredible. All of them are without a filter too!

If you’re not a fan of heights, you can take a bus trip to see the Briksdal Glacier, a definite must whilst in Olden too.

We also took a local train car ride around Olden and its lakes and heard all about the history of the beautiful port. 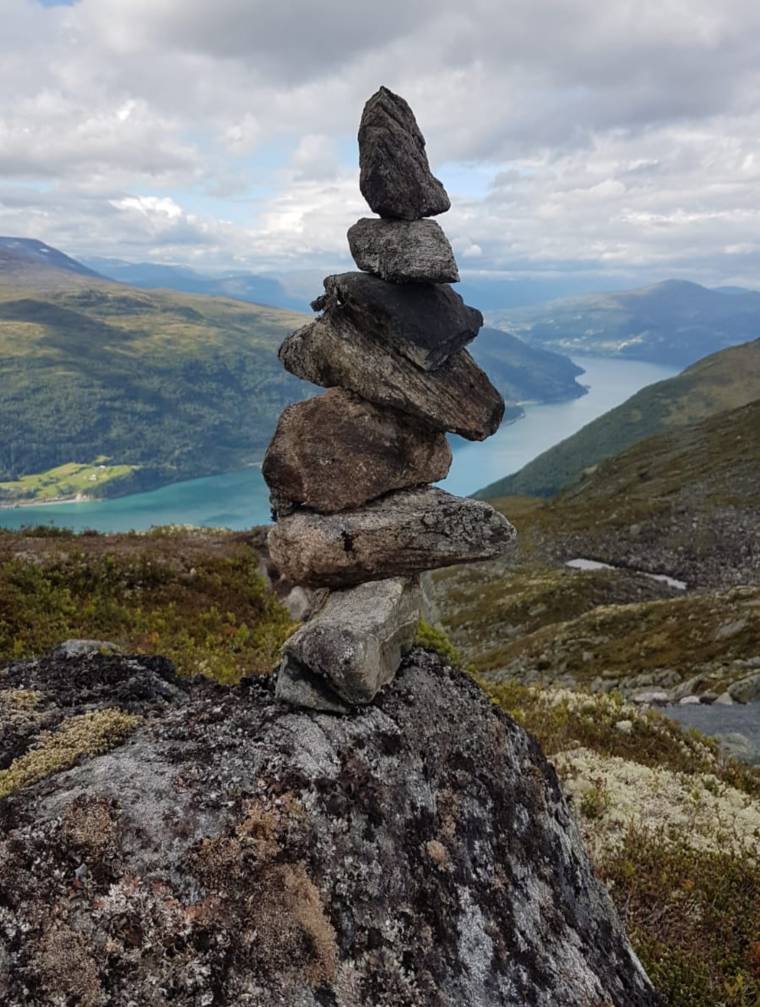 The last stop of our Norwegian Fjords cruise was Hellesylt, a very small village on the Geirangefjord with a population of around 100 people. From the ship, you can even see the wide waterfall crashing into the sea, due to the small port. Our ship only docked for half a day, which still gave us plenty of time to take a scenic walk alongside the waterfall and take in the views.

As a first-timer to the Fjords and sailing with Fred. Olsen, it was one of the best family cruise holidays we have had. Our kids couldn’t have had a better time and Fred. Olsen catered for all our needs. It really was the holiday of a lifetime.