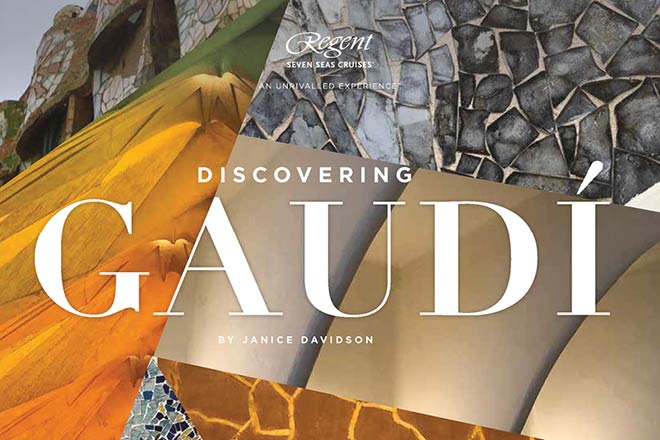 Think of drawing a house when you were a child. A square building, pitched roof, square windows, rectangular door. It’s simple. It’s obvious. And, it’s easy to draw. Now imagine 10-year-old Antoni Gaudí idly sketching the same thing amid the sounds and smells of a village in Catalonia, Spain in 1862. Is it then when Gaudí, an architectural force of nature who’d eventually be considered the leading light of Catalan’s seismic Modernisme movement, suddenly questioned the basic structure of a building. Perhaps he wondered, “Why not have waves instead of lines defining each level?” Or, maybe he looked at the branches of a tree and thought, “Why can’t my house reach for the sky like that?”

Two things inspired me to minor in architectural history during my pursuit of a Fine Arts degree: a love for designing structures on paper (a wholly aesthetic passion unencumbered by rigid mathematics) and Gaudí’s Casa Batlló in Barcelona. From the first time I saw photos of its organic and multi-coloured façade, with bones as windows and rainbow tile moving up the exterior topped by the spine of a dragon, I was intrigued and astonished. 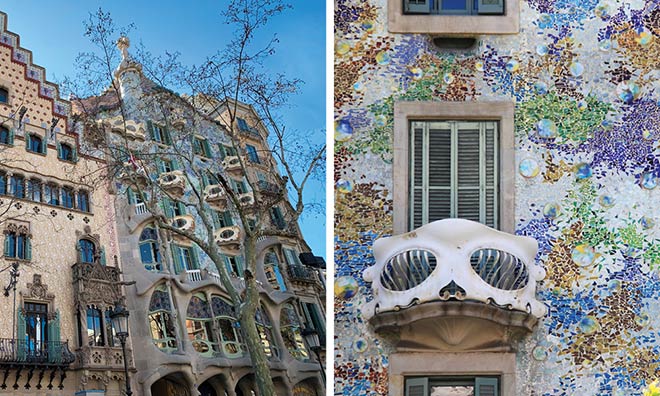 Originally built in 1877, along the enviable Paseo de Gracia by one of Gaudí’s architecture professors, the nondescript apartment building that would become Casa Batlló was purchased by textile industrialist Batlló y Casanovas in 1900. Gaudí was hired to redesign it in 1904 — a transformation that resulted in the nickname Casa dels Ossos (House of Bones) from the locals, as well as the distinction of being named one of seven Gaudí-created World Heritage sites by UNESCO.

Before my first trip to Barcelona, Gaudí’s startling use of colour and shape struck me as something out of a dream. Standing at the entryway to Casa Batlló for the first time, taking in the ground floor staircase that winds up like a dragon’s spine, that dream came to life before me like a beautiful fairy tale.

At the sala principal (main floor), the sight of its sleek, swirling ceiling culminating in a glorious light fixture almost brought me to tears. I couldn’t help but follow in the footsteps of countless Casa Batlló visitors and position my camera beneath the multi-layered light fixture and capture its perfect symmetry. It’s a phenomenon experienced by generations of witnesses to Gaudí’s genius: genuine, stop-you-in-your-tracks amazement.

The influence of nature upon Gaudí’s vision was so strong, proceeding up its six stories felt like journeying through a living organism. Natural light shone in every corner, an effect created by the main skylight and two innovative ideas — placing darkened blue tiles above lighter ones in a pair of gleaming patios and using larger windows in the lower floors. The greens and blues of Casa Batlló’s exterior are an obvious, almost coral-like homage to the marine world, a quality mimicked during the ascent inside from soft, pearl-gray walls to a perfectly proportioned use of ceramic pieces and cathedral glass that peaks in a cobalt blue.

Then I stepped into the attic, or what you might call the belly of the beast. While Gaudí may have been following Catalan modernistic style, his use of arches — at once organic and futuristic — gave me the unexpected sensation of being inside a whale. The roof is similarly singular, its mosaic tiles creating colour synergies that literally sparkled in sunset’s magic light. A remarkably soothing and calming quality for something that’s provided Casa Batlló with its other nickname: The House of the Dragon.

A TEMPLE OF COLOUR All of Gaudí’s treasures in and around Barcelona are worth exploring, especially the other World Heritage sites: Park Güell, Palau Güell, Casa Milà-La Pedrera, Casa Vicens, and the Crypt of the Colònia Güell. And any appreciation of Gaudí must include a mention of La Sagrada Familia, by far Barcelona’s most beloved symbol and the crowning glory of Gaudí’s soaring ambition, even as it remains unfinished 94 years after his death at the age of 73. When Gaudí took charge of the design and building of Barcelona’s neo-Gothic Basilica a year after the laying of its foundation stone in 1882, no one could have anticipated the extent of his radical vision. Two of its three major facades — the Passion and the Nativity — have been completed, while construction of the Glory facade remains ongoing. Eight unbelievably intricate spires currently make for one of the world’s most photographed structures. Gaudí’s plans call for ten more, including one that intends to make Sagrada Família the world’s largest church building. And even with all of this, it wasn’t the revolutionary exterior of Gaudí’s colossus that took my breath away. Much like the moment in the entryway of Casa Batlló, I was overwhelmed by the light and colour of La Sagrada

Familia’s interior. Gaudí is quoted as saying “Sunshine is the best painter,” and the stunning stained-glass windows are ingeniously designed to create an ever-changing symphony of colours that’s one of the most sublime sights I’ve ever taken in. Gaudí’s love of nature is represented by majestic columns that stretch like tree branches toward the ceiling and carvings of wildlife. But it was the transcendent atmosphere of vivid colours set ablaze by reflected sunlight that reminded me I was standing inside more than just one of the world’s most celebrated buildings. I was in a place of worship.

Janice Davidson is Vice President, Creative & Brand Experience for Regent Seven Seas Cruises® and Editor for EXPLORE Magazine. She has a deep love of design, art and travel, with a particular appreciation for the world’s great architecture.

This article was originally published in EXPLORE Magazine by Regent Seven Seas Cruises®. EXPLORE is a regular print publication of travel content covering art, culture, history, cuisine and more across every region of the world. Learn more at RSSC.com/discover-more/digital-brochures

Nothing we can find here yet