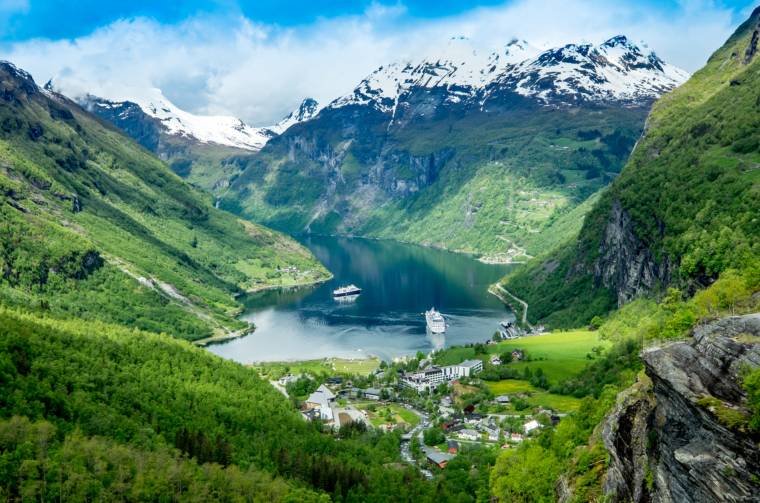 We’re craving wide open spaces and clean air. Big adventures and views that stop us in our tracks and make us catch our breath. Iona will finally join the P&O Cruises fleet in 2021 and she’s set to be the ultimate way to see the Norwegian Fjords like never before. Cruises from Southampton will cram in breathtaking scenery, culture by the boatload and action-packed adventure galore.

Norway and the fjords are one of the most dramatic destinations in the world and there’s a reason the region is rarely missed off the must-visit list of any avid traveller. Iona’s inaugural season will see her cruise to Norway throughout spring and summer 2020, making the most of a design intended to bring the outside in as she goes. Cruising roundtrip from Southampton means no luggage limits and shore excursions have been designed to cater for everyone from the avid adventurer to the culture vulture and lovers of lazier ways to explore the great outdoors. Best of all, once you’ve had your fun ashore, whether that involves white water rafting or snacking on smørbrød at a cosy side street café, you’ll spend the rest of the day and night kicking back on a ship that comes alive in those wild Norwegian landscapes.

Iona is doing things differently in the Norwegian Fjords. Here are five ways to explore Norway on the new P&O Cruises ship. Which one is first on your list?

Get your heart racing on a river-rafting ride

Norway is famous for its fjords and lakes, but its rivers deserve equal attention too. A cruise to Norway with Iona will present the opportunity to see them from a thrilling new perspective, on a fast-paced river rapid adventure.

From Hellesylt, you’ll travel to Valldal, a valley north of the Norddalsfjorden. Exploring this unspoilt slice of paradise near the UNESCO-listed Geirangerfjord is a treat for the senses.

Board your raft and get wet and wild as you paddle down 8km of fast-flowing river, navigating rapids and waves (and the odd calm patch). Catch your breath before the surrounding scenery takes it away again – you’ll pass soaring mountains and verdant landscapes as you travel along the river.

Your efforts will be rewarded with a lunch enjoyed around a bonfire on the banks of the tranquil Norddalsfjord – the perfect end to a once-in-a-lifetime experience. 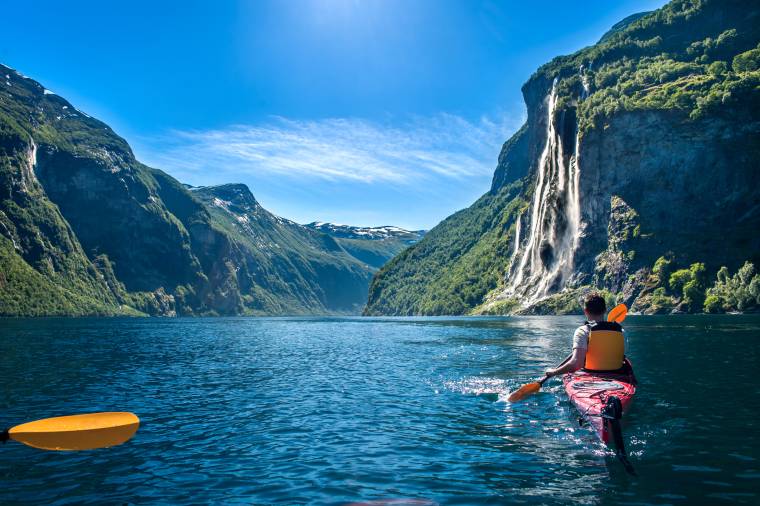 Norway boasts views worth climbing for but there’s a way to experience those mountains high that doesn’t involve such heavy exertion.

Right in the heart of fjord Norway, the Loen Skylift will whisk ‘from fjord to sky in 5’. That’s five minutes by the way, one of the world’s steepest cable cars making the 1,011m climb to the top of Mount Hoven in record time. You’ll need a head for heights but the views from the Mountain Station are well worth it, stretching from Mount Skåla and Lovatnet Lake in the east to Jostedal Glacier and Olden in the south and the Nordfjord and Stryn in the west.

The brave can burn off even more adrenaline on the Loen Via Ferrata, a mountain climb that tackles Europe’s longest via ferrata, a 120m-long suspension bridge over a 160m-deep canyon. 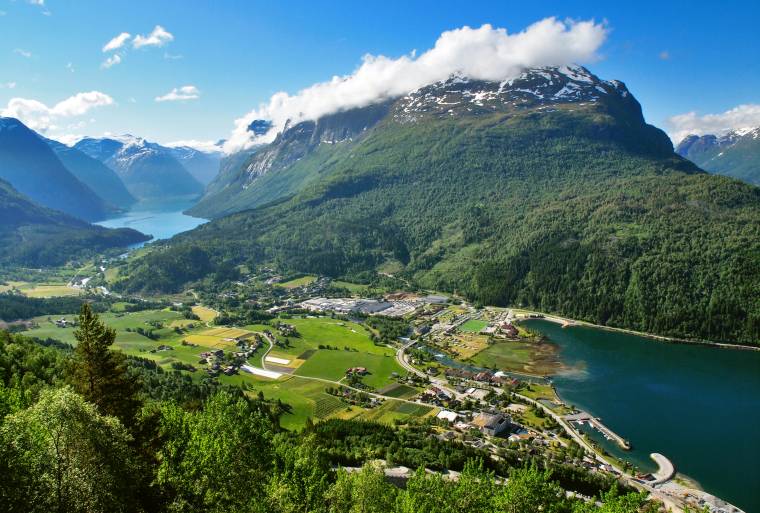 Take to the skies

See the wonders of Norway in all their glory from the skies.

Take a helicopter over Bergen or the Lysefjord, location for Tom Cruise’s death-defying stunts in this summer’s Mission Impossible Fallout film and home to one of Stavanger’s iconic Pulpit Rock.

Fancy a little aeroplane action? Take in the beauty of Hardangerfjord, Norway’s second longest fjord, by light aircraft. You’ll enjoy epic views of the finest selection of Western Norway’s deep blue fjords, coastal mountains and cascading waterfalls. The flight will also take you past the towns of Os and Rosendal, the Folgefonna glacier, Trolltunga and Ulriken mountains, and the Steinsdalsfossen waterfall.

Stride out on a Nordic walk

Nordic walking is no walk in the park. It’s a high-energy activity designed to get your blood pumping while showing you the sights of the beautiful Norwegian countryside. Twice as effective as ordinary walking from an exercise perspective, Nordic walking works the upper body muscles as well as the legs, despite the support of the poles making it feel easier. You’ll burn 50 per cent more calories than a regular walk in an all-over toning workout that doesn’t feel like exercise at all with those staggering views at every angle.

Make like the Nordic walking loving locals and stride out on Stavanger’s most popular trails, a coastal walk around the Storhaug peninsula taking in small harbours, pretty beaches and vistas of Gandsfjord and the mountains beyond. 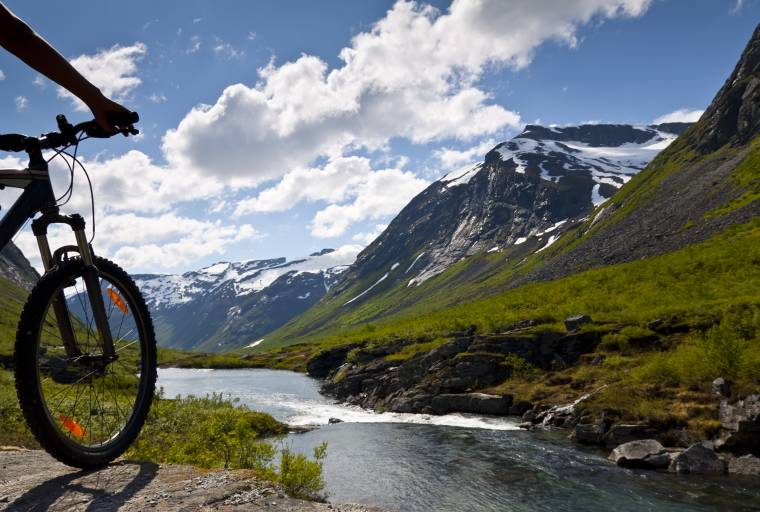 Norwegian cows, sheep and goats have got it good, grazing in the purest of pastures along the coast and high in the mountains. It’s hard to be anything but happy cattle when home looks like this so there is little wonder than Norway’s dairy products taste so good. Sample some of the best on farm tours or tuck into the ultimate Norwegian delicacy, Brunost.

Translated as ‘brown cheese’ Brunhost is rarely eaten beyond Norway’s borders so make the most of its sweet-savoury flavour while you can. It’s an acquired taste – the Norwegian’s love it but opinion among visitors is divided. Which camp will you fall into? 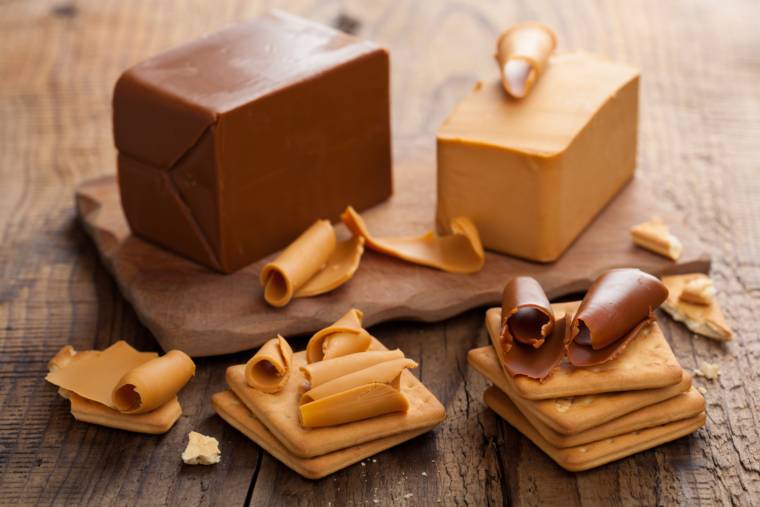 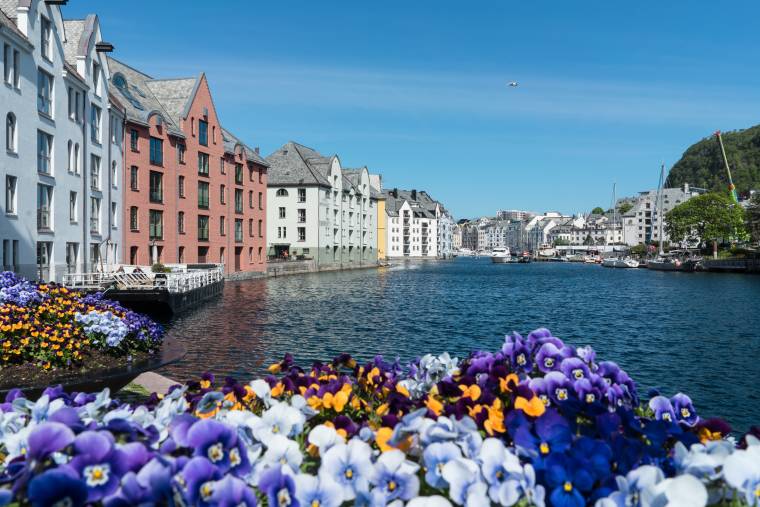