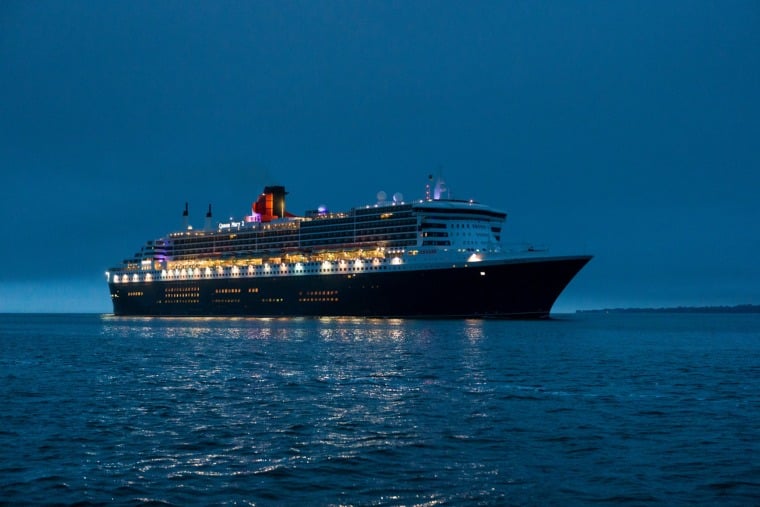 Girls just want to have fun. And a little luxury. Perhaps a couple of cocktails and a spot of shopping. Fortunately, a short break on Cunard’s Queen Mary 2 promises all that and more. Rebecca Martin sailed from Hamburg to sample high life and high tea on a new, altogether more grown-up version of the classic girls’ getaway.

There’s a transitional quality to weekend getaways with the girls. We start young in UK cities chosen for their propensity to party and cheap-as-chips hotels. Next comes the mini break abroad, a bit of sun and a smattering of cultural sights as obligatory as Aperol when it comes to the prerequisites of a good trip. Adulting proper sees a gradual drop in numbers, marriage and kids clawing away at the time and money once reserved for afternoon tea and spa days. And then we arrive here; all grown up and desperately seeking somewhere new to convene on that weekend once a year when the stars align and you’re all free at the same time. Which is exactly how a friend and I came to be wheeling our cases onto the Queen Mary 2; a day in Hamburg behind us and two frivolous nights at sea ahead.

While the ferry over to Amsterdam is a stalwart of the girl’s weekend away, a full-on mini cruise with all the bells and whistles always felt a little indulgent. Look at the costs involved and you quickly realise that it’s anything but; Cunard’s full-board short break to Hamburg with flights comes in well under £300, a figure that’d barely cover flights and accommodation for a city break, never mind the food bill. Add a drinks package and you’ll save money there too, meaning more Sauvignon Blanc for your buck and enough spare change left over for ‘sorry I left you, here’s a sweetener’ presents for the kids.

There’s a regal air aboard the Cunard flagship that leaves you feeling a little Downton Abbey, particularly when you’re tucking into finger sandwiches and sipping Earl Grey in the Queens Room before you’ve even left port. That said, Queen Mary 2 is a lady that shows no sign of aging. Her interiors are as sophisticated as any institution of the London hotel scene, all Art Deco accents and touchy-feely panels of engraved bronze. Rails of Barbour, Mulberry and Ralph Lauren merchandise meant that the Mayfair Shops were as dangerous to our credit cards as any spree in the area after which they are named.

Similarly, the CanyonRanch Spa Club is akin to the most esteemed luxury retreats hidden away in Kensington, though the cost of our passes to its Aqua Therapy Centre paled in comparison at just $40 a day. Better still, book a treatment and access to the facilities is free.

Late in the afternoon, full of the deliciously guilt-inducing carbs no girl’s weekend is complete without, we made our way up on deck to watch as the ship left Hamburg behind. The crowds had gathered to see us off from what seemed like every spare inch of the Elbe’s riverbank. Everybody waved, from summer houses, from tiny man made beaches, from the bows of passing pleasure boats; I couldn’t help but think how amazing it must be to experience the same sense of occasion as you leave New York on a Transatlantic crossing, the Manhattan skyline in the background
and nothing but ocean ahead.

By the time we had bid Hamburg farewell, embarked on a self-guided tour of the ship and called into the Golden Lion for a drink and a game of darts that convinced us the sea must be very choppy indeed (it wasn’t), it was time to get ready for dinner. Meals on Cunard ships feel like a sophisticated affair, thanks to cavernous dining rooms reminiscent of those on the ocean liners of old. Tonight’s dress code was more casual than tomorrow’s black tie, but we were on holiday, so the heels and dresses were on regardless and we toasted the loss of Wi-Fi with a bottle of bubbly that had been generously left in our room for doing just that.

We found that evenings tended to begin with drinks and hors d’oeuvres in the Golden Lion, with many reconvening there again later, after dinner in the Britannia Restaurant. It’s surprising how quickly things become routine and this was one we were happy to fall into from the first night on. Dinner itself was fab, a four-course feast that left us wondering how we’d find room for wine later (sore heads confirmed that we did) and the immaculate service and surroundings only served to emphasize the feeling that this was a real treat of a weekend.
The next day, our only sea day, passed by in a haze of breakfast in Kings Court, followed by window shopping in the jewellers, stargazing in the planetarium, then a whistle stop visit to the kennels; there are 24 on the Queen Mary 2 and seeing a crowd of bichon frises jostling for space at the fire hydrant with a bemused husky was a novel way to pass ten minutes in the sea air.

It was cold for June and we decided that the only possible way to warm up was with warm, gooey Godiva chocolate fondue at Sir Samuel’s. The special Godiva Afternoon Tea is the ultimate indulgence here, but plates of flaky croissant, strawberries, handmade marshmallow and glutinous melted chocolate did the job just fine. Never ones to leave that last piece of croissant behind, we left feeling a little too full and conscious that we had indeed ruined our lunch with too much sugar. 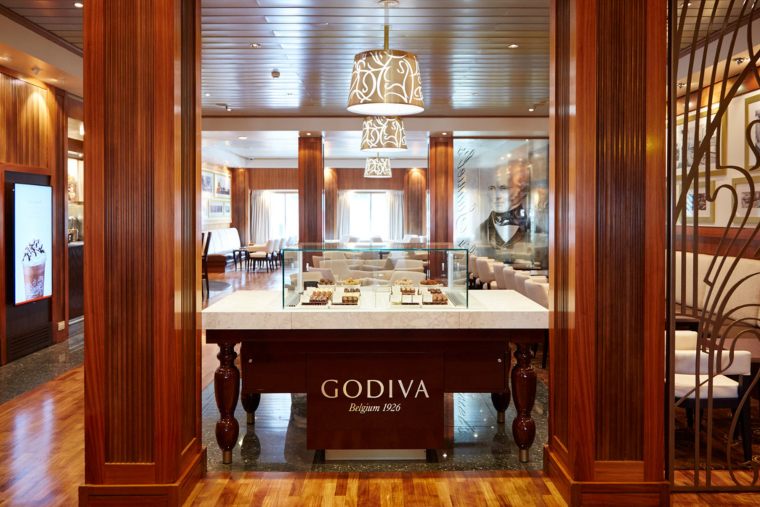 A visit to the Cunard bookshop saw ‘Charles’ Grand Adventure’ bound for two-year-old Beyer’s book collection, joining an adorable plush bulldog decked out in his own QM2 dog coat and some trinkets sourced in Hamburg on the pile of presents filling mum’s case.

The gym had impressed us when we called in to take a look the day before, so we did something absolutely unthinkable on a weekend away; we worked out before dinner. Oddly, time seems to pass more slowly at sea and the thought of filling an hour with a leisurely gym session, completely undisturbed by emails or the demands of kids, felt like an utter treat. It’s also worth mentioning that the fact Godiva chocolate practically flowed through our veins by this point meant there was a conscience cleansing element that couldn’t be denied.

It just so happened that our time in Hamburg had coincided with sale season on some of the best shopping streets in Europe, something that inevitably led to the outfits we had planned for gala night being relegated. Instead, it was an oyster satin halterneck for me and a Seventies-style lamé maxi that would have had the whole of Studio 54 swooning for Lauren. There were heels and shoulder-skimming earrings, plus enough hairspray to sink a ship (excuse the pun), but this is black tie night on  the Queen Mary 2; there is no such thing as overdressed.

Dress codes on cruise ships divide opinion but there is something about Cunard’s British sensibilities and classic design that makes wearing your most OTT evening dress feel perfectly acceptable, if not expected. And let’s be honest, chances to ‘don your finery’ like the darlings of Downton are in desperately short supply.

We resumed our routine of nibbles and drinks in the Golden Lion, before a show in the Royal Court Theatre and a special gala dinner. From here on in, Queen Mary 2 let her hair down and took her guests with her. Karaoke brought down the house in the Golden Lion, the traditional pub barely containing the crowd. After an encore, the party relocated to G32, QM2’s resident nightclub where shapes were thrown and appetites worked up for the midnight buffet.

How did a Cunard cruise fare for a girl’s weekend?

So, how did a Cunard cruise fare for a girl’s weekend? The answer is rather well actually.

Having ticked the usual city break spots off the list over the years, often-overlooked Hamburg was an unexpected success story of great shopping, a lively waterfront with fab food and drink options ranging from farm fresh and local to stodgy German signatures, plus architectural highlights that left us wondering why Berlin and Munich hog the limelight.

Of course, Hamburg was just the aperitif. Queen Mary 2 was the main event and what a host the flagship of the Cunard fleet proved to be. This was to be a grown-up weekend away and Cunard’s signature experience was indulgent and extravagant enough to be just that, without the eye-watering price tag you might expect to come with it.