How does the Ocean Medallion from Princess Cruises work? 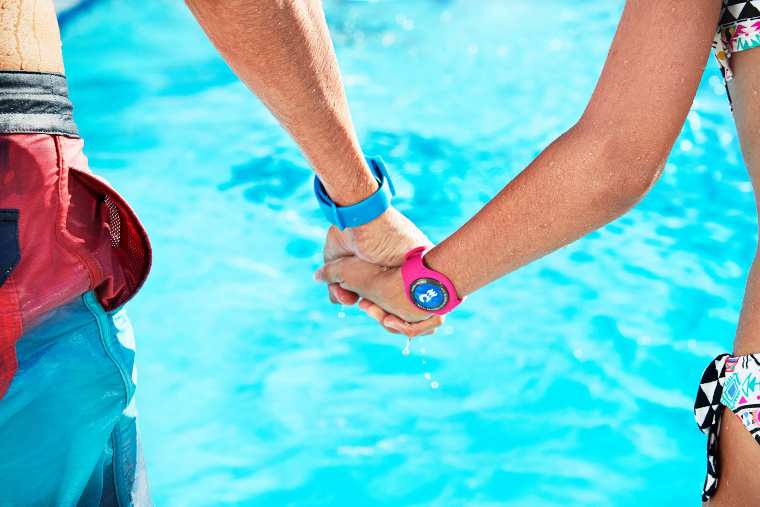 Hailed as a revolutionary device aiming to change your cruising experience, the Ocean Medallion first arrived in the Princess Cruises fleet aboard Caribbean Princess but made its debut on British shores this week via Crown Princess. Bolsover Cruise Club’s Fran Puddick went on-board Crown Princess in Southampton, to find out more.

I used to consider myself relatively tech-savvy, I know what the Internet of Things is and I used to work in digital, for heaven’s sake, but the further away I get from my twenties, the more I realise everything I know is probably about 10 years out of date, so I was curious to understand just how the award-winning Ocean Medallion was going to enhance the holiday of a dinosaur like me.

First impressions of an Ocean Medallion

First up, it’s personalised!  Rare is the day I find something that literally has my name on it, so I was a bit chuffed with this; like most people, I love something that’s been made especially for me. And not only does the Ocean Medallion feature my name, it also includes the departure date of my sailing. Nice little keepsake, right there!

It’s slightly larger than a 50p piece, so it’s inobtrusive and easy to carry, and whilst you receive a corded necklace to attach your Medallion and wear it wherever you go there are lots more options. From small magnetic brooches and necklaces to wrists straps, it’s up to you how, or even whether, you wear it.

You can choose to receive your medallion before you sail, and the good thing is, there’s no setup; at all! No on-switch, no charging, no battery life, it’s just, sort of, there. Which, quite frankly, is exactly as it should be, because the Ocean Medallion is not ‘the thing’, amazing experiences and service are ‘the thing’, and there’s lots to talk about there. 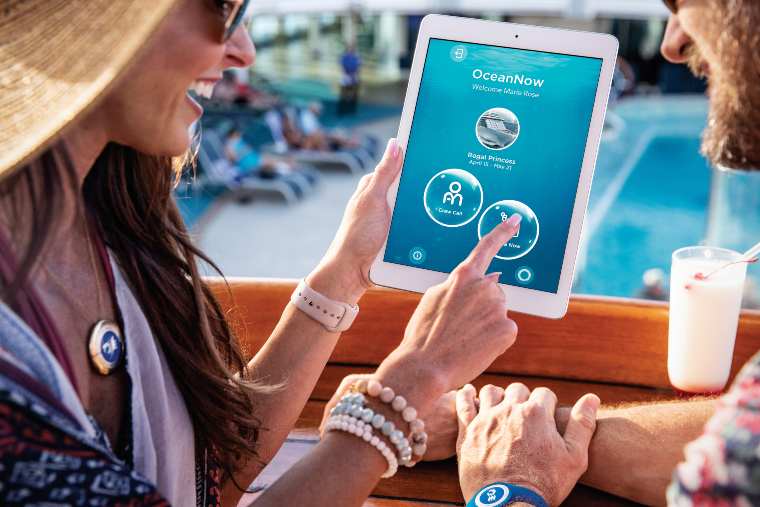 Safety, security and your cabin

Walking up to your cabin to be greeted by a cheery ‘hello’ from your cabin screen and for your door to magically unlock, might sound like a gimmick. But it’s only when you see it or better yet, try it, that you realise how incredibly handy that is. Got your hands full with that mojito and snack? Not a problem. Early morning coffees in hand? No sweat. The cabin unlocks once you’re within 3 feet but locks again when you move away, so there’s no need to fret about security if you’re just walking past.

If, like me, your holidays are about changing the routine completely, this might mean, *whisper it*, a nap, in the daytime!  But I know I’m not the first to forget to put the ‘Do Not Disturb’ sign on my cabin door. Well, thanks to the brand-new Ocean Medallion technology, it no longer matters.

House-keeping will be able to tell if you’re in your cabin or even if you’re on the ship, based on the jazzy geo-location technology in the Medallion, which means that not only are housekeeping services synched to take place at the most convenient possible time for you (when you’re ashore?!) but also there’ll never again come that knock at the door when you’re in full snooze mode. 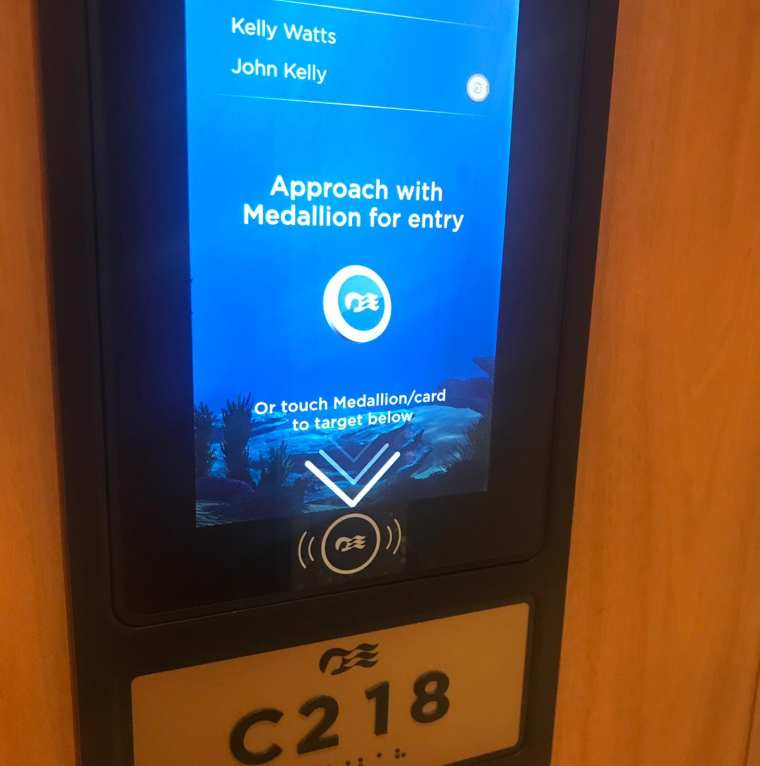 Finding your way around

At prominent points throughout the ship, you’ll find Ocean Compass, the interactive portal screens with a difference. Now, interactive ship maps are nothing new, I’ll give you that, but I’d never seen anything like this before.

Not only can you again, personalise your experience, creating your very own character (known as a tag-along, I designed myself a beautiful seahorse, named Herman), play games, and of course navigate your way around the ship, the portals also display entertainment and activity options from throughout your entire cruise. And because the portal recognises you, you can save anything on the schedule that takes your fancy. A simply great way to plan your holiday or make sure you don’t miss that once-in-a-lifetime show or event.

So far, so cool. But of all the features that really impressed me, it was the ‘Shipmates’ function. Shipmates are essentially the other people you’re travelling with, and the combination of your Ocean Medallion and the Portals, mean you’ll never lose one another again.  Cruise ships can be big, and kids don’t always turn up when they say they’re going to (or, if they’re like mine, they run off), so this feature provides tremendous peace of mind for families travelling together. And it’s not solely restricted to those you travelled with, you can choose to add your new cruise buddies to your Shipmates, so you won’t lose touch!

Another added extra to this is you can also contact your Shipmates through Ocean Medallion’s mobile phone app, giving you free, on-ship messaging so you can make plans for dinner, arrange a show or simply just say hi!

Service wherever you are

Imagine this; you’ve found the perfect sunbathing point on the ship’s top deck, pulled out your book, and had your Pina Colada delivered – via Ocean Medallion, of course – but you’ve forgotten your sun screen. Never fear, Ocean Medallion’s Uber-like service means you can simply order your sun screen from the shops onboard using the Medallion app and the service staff will be able to find your exact location and bring it straight to you – you’ll even be able to see when it’s en route!  Of course, almost anything can be delivered, from your favourite burger and fries to your beloved beer. If it can be found on the ship, the likelihood is that you can have it delivered. And the best bit? Your server will know exactly where you are, AND, what you look like, thanks to their own Ocean Medallion enabled technology. Never flag a waiter down again!

I’ll be honest, I’ve barely scratched the surface of what the Ocean Medallion can do and what it means for the future of cruise; there just isn’t enough time to shout about its many features and its potential, but I think it’s clear that Princess Cruises are taking cruise ship technology to the next level, but making sure it has amazing service and second-to-none experiences at its core. The Medallion is irrelevant, it’s the Ocean that’s the star. 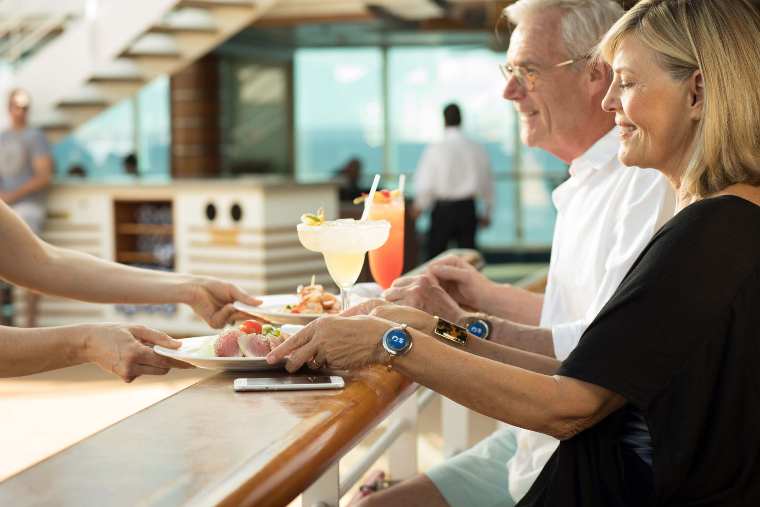